Looking into the playroom, David and Hallie see Carrie and Tad begging them to come in and join them. David starts in, but Hallie tells him they mustn't. Carrie and Tad disappear, and Hallie closes the door. David points out they were standing on a staircase, and wonders where it came from. He opens the door again, and it's once again a closet. 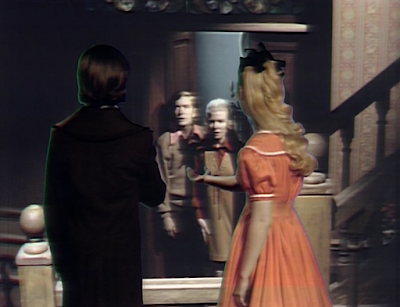 Elizabeth asks Quentin if Julia and Barnabas are near. He says they're at the old house. She tells Quentin she senses something about the house. He asks if she's seen or heard anything. She says he should save the ghost stories for Julia and Barnabas. She says that her horoscope says that a loved one is going to meet a stranger. She asks him if he's seen any strangers on the grounds today, and he says he hasn't seen anyone. She asks if he's sure, and he swears it. 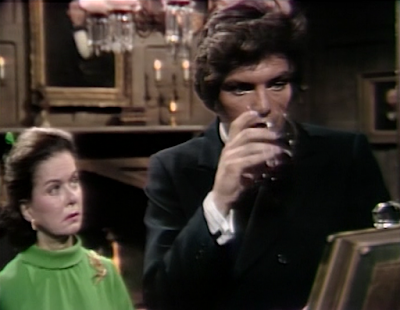 David tells Hallie that the important thing is that they didn't follow them. She says they almost did, and he admits that they would have been lost from their own time forever. She asks what they're going to do, and he says that can't do anything. Hallie tells him they can run away from Collinsport. He says they'll follow them. He wonders if it would work. They go to leave the room, but can't open the door because it's locked. David comforts Hallie, who is crying. He assures her that they're not going to stay in there. She tells him it won't be for long. She says they'll come to them and tell them what to do. David says he's going to climb out the window and go around to unlock the door. Hallie says she doesn't want to be alone in the room, and he assures her that he won't be long. After he's gone, Hallie senses Daphne, and smells the lilacs. She sobs. 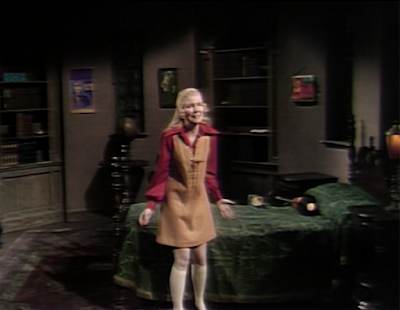 Elizabeth is walking by and hears Hallie sobbing. She tries the door and asks Hallie to open it. She says she can't because it's locked. Elizabeth unlocks it and asks who locked her in. Hallie says it was no one, and Elizabeth asks if it was David. Hallie says that it was.

David sneaks in the front door. In the drawing room, Quentin says he wishes Daphne was a stranger... and mentions the smell of lilacs. He gets up to fill his drink, and David comes in and asks him who he's talking to. Quentin says he's talking to his empty glass, and fills it again. David tells him goodnight and leaves. Quentin asks David if he's alright. David says that he is, and continues upstairs. 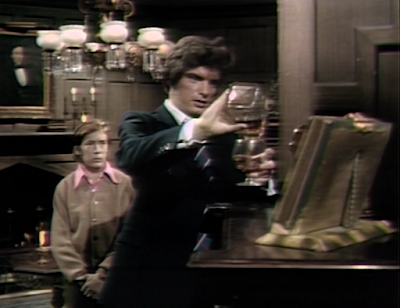 Elizabeth says there must have been a reason David did such a cruel and stupid thing. David enters, and Elizabeth tells him that she wants to know what's going on. David tells her it was only a game. Elizabeth is disappointed in him. She tells David to apologize, and he does. She accepts his apology, and says she knows he wouldn't do anything to hurt her. After Elizabeth leaves, David notices a pirate flag on the Java Queen model that wasn't there before. 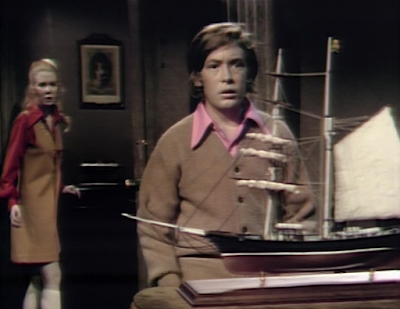 Elizabeth finds Quentin in the drawing room reading a diary from his ancestor Quentin. She asks to see it and he hands it to her. She reads from the 1840 entry for the same day. She asks him what it means. He says it means exactly what it says. She reads, "Tomorrow we bury Carrie and Tad." 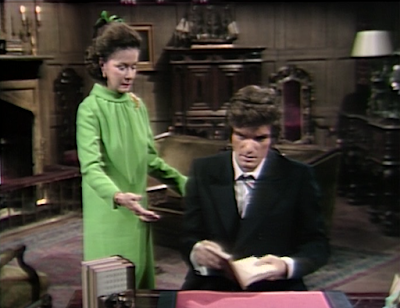 Elizabeth checks in on David in his sleep, pleased to see that he's alright. She leaves the room and David stirs. He dreams of a man standing outside his door. The man stands in the shadows. David gets out of bed and approaches him. Hallie joins them in the hall. They follow the man to the top of the stairs. They start down, but run back up, and the man disappears. The front door opens and Elizabeth comes in, calling for Quentin. She says she must see them, and must be with them. They hear her crying in the drawing room, where Quentin tells her that they did all they could. They come out of the drawing room and Quentin helps her upstairs. 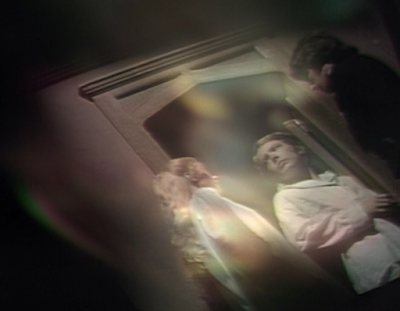 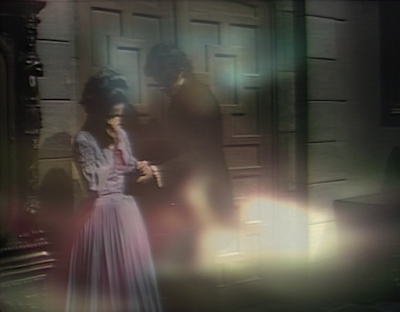 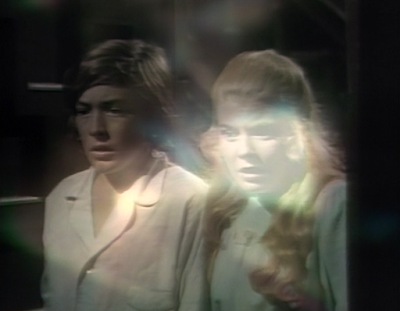 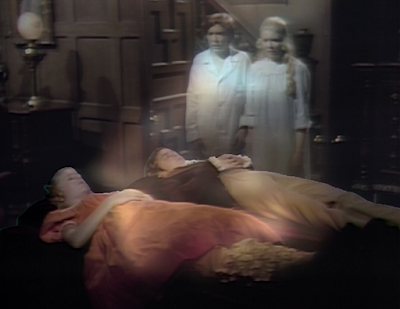 David and Hallie come downstairs and go into the drawing room, where they find the dead bodies of Tad and Carrie lying in state. David wakes up and goes into he hall. Hallie comes to him and says she had the dream, too. David asks her who the man was, and Hallie points to the man, standing in the hallway, and screams. 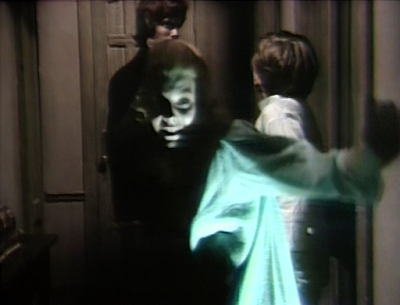 John: I for one thought we might lose David today crawling outside the walls of Collinwood. That sure would have been an interesting way for him to go!

Christine: He did seem destined to pull a Bran Stark, especially as he was crawling out the window at such an odd angle. 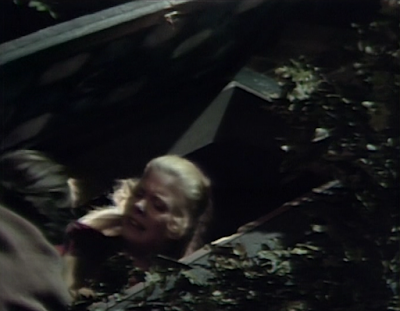 John: Call me crazy, but they sure do seem to be setting things up for a flashback, 1840-style. Between establishing Quentin and Elizabeth, Tad and Carrie, and Daphne and Gerard (who we might finally hear speak!), the only ones missing are Barnabas and Julia, and they are almost sure to catch the time stairs to 1840 any day now...

Christine: Past precedent does indicate a visit to 1840 is inevitable. I wonder how much longer we'll have to wait.

John: Quite a bit of twinning with the Chroma-key today. It is nice to finally have Gerard back after a bit of an absence, but I have to say, he's en embarrassment to pirates everywhere if the flag flown on the model Java Queen is representative of the flag truly flown on his ship!

Christine: It seems the kind of flag that belongs in a cocktail. 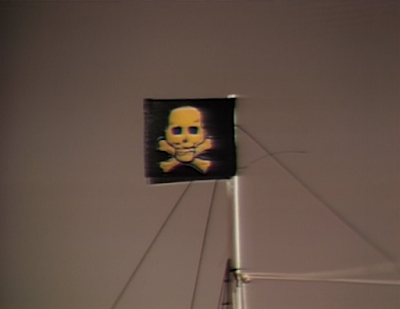