Julia and Morgan go into the 'curse' room. Neither seem concerned that there are candles burning. Before they go into the next room, he tells her that what's inside isn't very pleasant, and confirms she that wants to go in. She tells him that she does. They go into the next room and Julia is terrified by what she sees. It's the bodies of James Forsythe and Amanda — perfectly preserved and covered in spiderwebs. Morgan tells her not to go in. He says when he touched him, that's when he became possessed. She says they must get a Christian burial. Morgan says that's not in Brutus' plans. The room goes dark, and the door behind them slams shut. He says the door is locked. They pound on it. Julia gasps, saying that one of the bodies is moving. 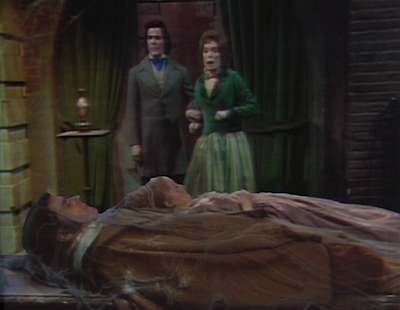 Catherine wakes up, terrified. She tells Melanie she's responsible for her being in a coma. She says that in her dream, she couldn't help her. Melanie tells her that Daphne chose who to marry. Catherine says that if that were the worst of it, perhaps she could live with it. Melanie asks her what else she has done to Daphne.

Julia says that she could have sworn one of the bodies moved. She asks Morgan what plans Brutus has for them. She says they'll never be found, and then screams and pounds on the door. Brutus's spirit appears outside the room, laughing. 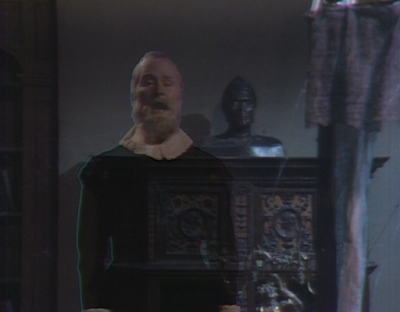 Melanie tells Catherine that it's best not to think too much. Melanie offers to leave her alone for a few minutes. Catherine falls asleep, and Melanie leaves.

Gabriel is outside Catherine's room, and after Melanie leaves, he goes in. Catherine wakes to find Gabriel standing over here. She asks what he's doing. He says he's leaving. She gets out of bed and tells him she'll call someone. He says no one must know. She asks what he wants, and he says he wants money. She explains that she doesn't have enough for him to get away from Collinwood. He says if he stays, he'll die. He says that the two of them are the only sane ones. She says the family wants to take care of him, and he says they want to kill him. Or lock him away. He says his mother gave him a book of his father's meditation. He says they want him to be their victim. She says she wants to help him, but she doesn't have any money. He says they taught her to lie. He pulls out his knife and says he has to teach her something. She begs him not to hurt her. She says she's his friend and she wants to help him. She says she doesn't have money, but she can give him jewelry. She offers to trade it for the knife. He lunges at her but she dodges him. He hands her the knife and takes the jewels she offers. 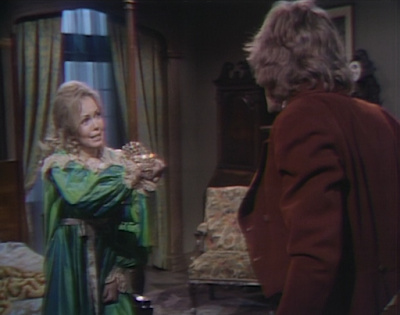 Morgan gets a lamp lit, and Julia says that now they'll be able to see death when he comes to take them. She becomes hysterical, so Morgan slaps her.

Melanie is walking by when she hears pounding on the door and calls for help. She asks where he is, and he tells her they're behind the iron door. Melanie asks if he's really Morgan. She opens the door and Julia rushes past Morgan and Melanie. They all leave the room without looking back.

Gabriel is about to leave Collinwood when he hears a voice telling him it's not his time to go, and beckoning him to come to the voice. Gabriel walks back upstairs.

Morgan says that have got to do something about Brutus' room. Melanie says that might only make him angrier.

Gabriel goes to Brutus' room. He doesn't want to go in, but he hears the spirit voice demand it. He goes in and sees a knife on a table. Brutus' spirit appears and tells him to pick it up. He says he doesn't understand. Brutus says he is his servant, and will do as he is commanded. He asks why Gabriel didn't pick up the knife. He says that servants need not understand — only obey. He says Gabriel will do his bidding; killing everyone one-by-one. After giving his orders, he tells Gabriel he must prove himself worthy. Gabriel picks up the knife and says he will be worthy. 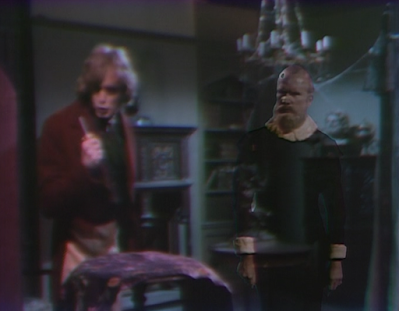 Catherine tells Morgan that she gave Morgan the necklace and he went away. She tells Morgan that she wants him to take her away from Collinwood. He agrees, suggesting a trip. She clarifies she wants to leave Collinwood and never come back. He says it's not possible. He tells her that he loves her, and he doesn't think she loves him. She tells him he's talking nonsense. He says that if anything happens to Daphne, Bramwell will be free again, and that's why she wants to leave. She says her fear has nothing to do with Bramwell and Daphne. She says she's afraid of losing him. He tells her that Collinwood is his home. She tells him the house is cursed. He clarifies that the family is cursed, and will be wherever they go, so it does them no good to run away. He asks if she loves him. She says she does. He begs her to stay with him. He says there's no reason for them to eve leave Collinwood. 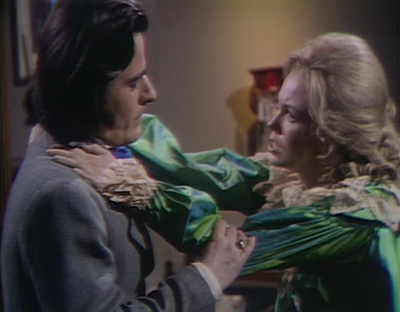 Melanie tells Julia that after all that has happened, she shouldn't be surprised to see he leave. Julia explains that it's not as simple as that. Melanie says it will be better after she marries Kendrick. Julia says that they all want to help her. Melanie adds that she also wants to keep her confined to the house. She reiterates that she will marry Kendrick. Julia says she'll have a husband, and Kendrick will have a patient, not a wife. Julia encourages her to wait, but she refuses. Julia wishes her all the best, and leaves her alone. Melanie turns and sees Gabriel in the room with her. She's shocked. He asks if she knew all of the secrets in the house. He raises his knife and stabs her. 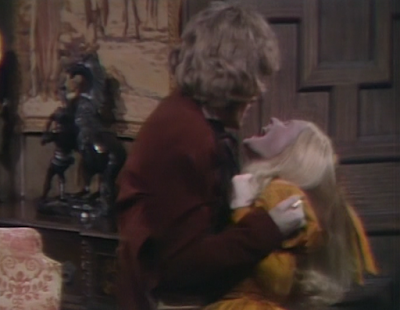 John: I know I'm not retaining a lot of parallel time details, but hadn't we seen Amanda in skeletal form in the hidden room?
Christine: You may be thinking of James Forsythe's sister Sarah's skeleton he dug up in the cottage while possessing Morgan.
John: Is today the day? Have we seen the last slap of Dark Shadows original run? Julia certainly deserved it, so good job, Morgan! That's a hat-trick, having delivered the last three slaps on the show! And each one to a different recipient!
Christine: Moreover, is this the last time we'll hear Julia scream hysterically? If not, perhaps there are more slaps to be delivered.
John: How exactly did Gabriel recognize Brutus' spirit? It's not like we've seen his portrait anywhere in the house. And do you think we're supposed to believe Melanie is dead after being stabbed in what clearly seems to be her arm?
Christine: I assumed Gabriel recognized him because he spent part of the night in the room with him. Perhaps Gabriel needed a little more direction from Brutus as to how to go about killing the family since he's unaware what part of the body he needs to target to achieve a fatal blow. What do you think the chances are that the corpses of James Forsythe and Amanda Collins will rise and start shambling through the halls of Collinwood in search of brains to consume? Justin Collins seems to lack that sort of ingenuity. 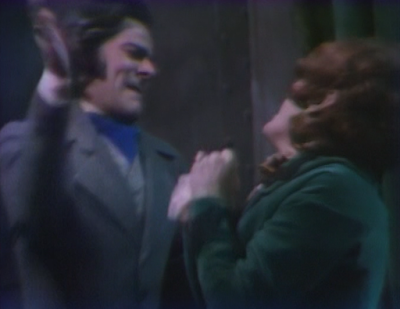 The scripts make Gordon Russell seem desperate to get away from the show. In last week's episodes, he was seeking out elements that it was possible to like (Morgan and Flora's relationship, Daphne's personality, the unintentionally funny exaggerated narcissism of Bramwell and Catherine) and deliberately ruining them for us. And in this one, he shows us characters trapped forever in the house, unable to change, unable to leave, unable even to decompose. By this time, Russell must have known when he would be out of his contract, but it would appear that the date seemed impossibly distant to him.

I know you guys do your best with these trackers but you are forgetting one slap in the series when Quentin slapped Beth for lying to him about seeing a sick friend or something. I can't remember the episode but I do remember it was shortly after the Laura story, my best guess between episodes 761-768.

Indeed it was 768, Billy — thanks for pointing that out! The slap tracker was introduced late in the blog, so there were bound to be some early slaps that we missed. After reviewing the screenshot in our post, that certainly was a major one! Thanks again for the assist!