Kendrick visits Melanie. He explains that he saw Carrie, and he's already spoken to her real mother. She asks him to tell her who her mother is, and he says that she's on her way to see her. He says she'll be there shortly. She's very excited. There's a knock, and Kendrick goes to answer it. Melanie gasps and smiles. It's Josette. They embrace. Melanie says there's no one else she'd rather have as a mother. Josette says each time she saw here she considered telling her the truth. While Julia eavesdrops, Melanie asks her why she didn't keep her, and she says they couldn't, and ask to leave it at that. Julia bursts in and says Josette has told her enough. Josette says she should never have given her up. Julia says that she didn't have a choice, and Josette counters that she did. She says she could have taken Bramwell and the baby to Boston. Melanie asks what happened. Julia says she was persuaded that she couldn't take care of her children alone. Josette says she knew they'd take care of her. Julia tells her that telling the truth now can benefit no one. Josette tells her that nothing will stop her from telling Melanie the truth. Julia says she's so overwhelmed that she'll do anything for her daughter, no matter who she hurts. Melanie tells Julia to leave, and she does so reluctantly. 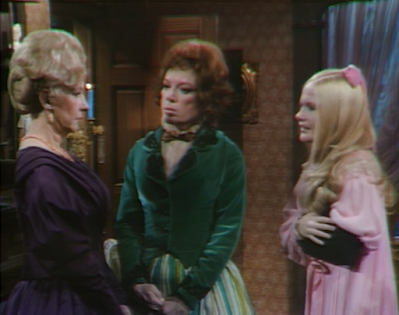 Melanie asks her mother to tell her everything. Josette explains that her father, Justin Collins, insisted that she do what she did. Melanie can't believe it. Josette tells her that she's just as much a Collins as any of the others. Melanie says that she and her father must have been in love. She says it was after Barnabas died, they would spend time in Boston together. She says she got pregnant, and Melanie was their child. She says Justin hoped she would be a girl, having had three sons. Melanie thanks her for telling the truth. Josette says he offered to leave Flora, but she knew that was wrong. So she ran away to Boston by herself. She says he didn't track her down until after she was born. She says he convinced her that Melanie was the only thing that mattered. Melanie says it must have been hard to watch her grow up as someone else's child. 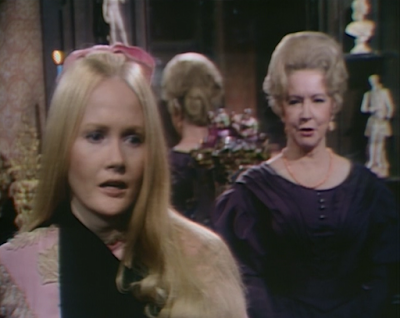 Julia finds Kendrick in the drawing room and berates him for prying into the family business and picking apart their secrets. She asks if he intends to tell everyone what they found out. Julia insists that Flora not be told. He says he will do whatever Melanie and her mother want. He then asks Julia how she found out. Julia explains that she found a letter in one of Justin's coat that she was donating to charity. She protected Flora, not letting her know that her husband had betrayed her with another woman.

Bramwell watches over Daphne. She wakes and is surprised to see him. He asks her how she feels, and she says she's tired. He says he's grateful she found her way back to him. She says she dreamed that she had his son, and the look on his face told her how much he loved her. She sees him change, and asks him what's wrong. She says she was wrong to come back. He tells her to chill out, and says that he does love her. She asks him not to turn away from her. She asks if he wants to have a child. He tells her that right now he wants her to get better. He says he may have failed her as a husband up until now, but he won't fail her again — ever. 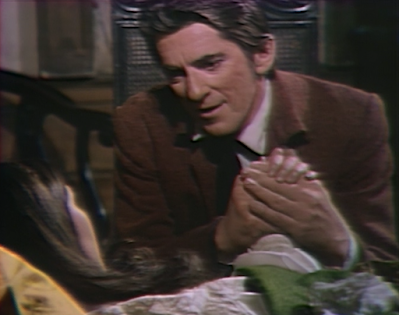 Melanie is excited to realize that Bramwell is her half brother. Josette says she wishes she could have told them the truth when they were children. Melanie says she can't wait to tell the truth when Julia enters and interrupts them, saying that no one must know. Melanie says it doesn't concern her. Julia says she has obligations to the family, and she forbids it. Josette says she's not a child, and Julia tells her that she IS a child. A wilful child using Melanie for revenge against those she felt treated her badly. Julia asks Melanie if she wants to hurt Flora. She says she doesn't, but she also doesn't want to prevent her mother from telling the truth. Julia says that she owes it to Justin to take care of Flora. Melanie says if it's agreeable to Josette, they will say nothing. Melanie says that she needs to talk to Kendrick. Once she's gone, Julia tells Josette that she must never come to Collinwood again. Josette is shocked, and says she cannot treat her as an outcast. Julia says she made herself an outcast when she and Justin broke the laws of God and man. 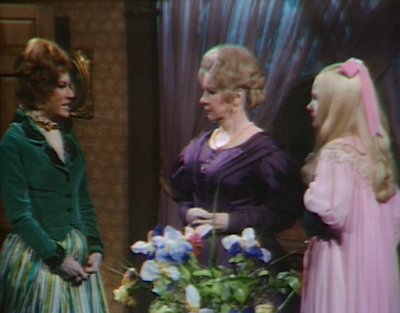 Bramwell brings Daphne tea. Josette arrives and is pleased to see Daphne doing well. Bramwell tells his mother not to look sad. He asks her what's wrong, and she turns and runs from the room.

Melanie says she doesn't know what to do. She says she doesn't want to hurt Flora or her father's memory. He says they will find a way, once they are married. She asks when they can be married, and he tells her they can go to the village and find out.

Bramwell comes to Collinwood and asks Julia what happened tonight. He says his mother came home very upset. She says there's nothing she wishes to tell him. He says her mother has never been so upset. Josette bursts in and tells Bramwell that something terrible is happening to Daphne. He runs out, and Josette follows him, but not before casting a glance at Julia. 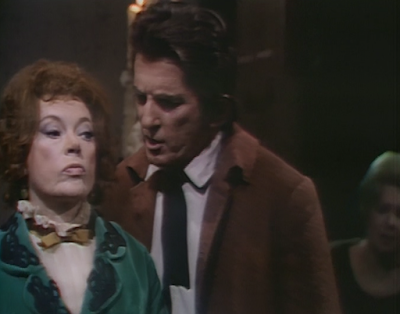 Daphne, back at Death's door, tells Bramwell there's something she must tell him before she goes. He says he won't let her go. She says that not even his love can make her stay. She explains that she only came back for a visit, and now she must return to the darkness forever. She tells him that it's comforting, and she's not afraid. She tells him to find comfort without her. She says that in time, he will want Catherine, and she will want him. She gives him her blessing. She says they are the two people in the world she loves the most, and they must comfort one another. He tells her not to give up, but she dies. He begs her not to leave him. 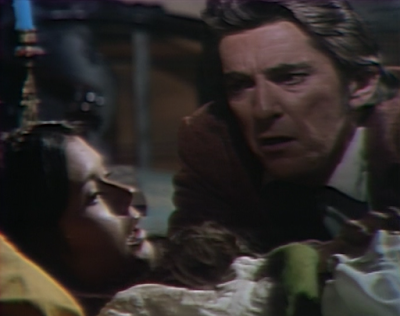 John: So we finally get the grand reveal — Josette is Melanie's mother, Justin is her father... and Melanie accepts it immediately and without question. And then Julia interrupts thinking she's going to strong-arm people into not sharing the info. And after somehow getting them to agree to cooperate, she basically tells Josette to get lost? If she's being banished from Collinwood, why would she care about what would happen if all the other family members found out? It seems ridiculous to think that now that the information is out there, everyone is going to keep quiet about it. And Justin and Josette broke the laws of God and man? Really, Julia? Isn't that laying it on a bit thick?
Christine: I find it hard to believe that Josette would turn to a married man for attention while in the throes of grief over losing her devoted husband. Justin was truly a cad. I'm also not sure how this fits Carrie's image of Melanie's mother bent over her father's coffin. Did she nudge Flora aside for the privilege, or just wait for her to take a potty break from her vigil to pay her respects?
John: What the hell? Daphne has been up and down the health yo-yo over the past several episodes, and now we get the full range in a single episode? Out of the blue, she was back to normal and perfectly healthy... and then... dead.
Christine: It felt something like this...
John: Nice of Daphne to use her final moments to set her married sister up with her husband...
Christine: We are certainly on a fast track now. Do you suppose Catherine will be having the baby by Friday?

There are the three women on the show old enough to be Melanie's mother- Flora, Julia, and Josette.

Flora might have been the most story-productive answer- why would she have gone through the charade of adopting a baby who is in fact her biological daughter, especially if her husband regards himself as the girl's father? Revealing Flora as Melanie's birth mother would open that new and deeper mystery, setting us up for what might be a very interesting storyline.

Julia would also open some intriguing possibilities. Her confrontation with Bramwell this episode is a reminder of old times, the first scene Grayson Hall and Jonathan Frid have had together in what seems like eons, and it shows how interesting the show can become simply by putting those two together. If Melanie were the product of an affair between Julia and Bramwell's late father Barnabas, we would not only have a sop to the Julia/ Barnabas shippers, but also new and explosive relationships between Julia and Bramwell and between Julia and Josette. That revelation could have led us just about anywhere.

Josette as Melanie's mother is a total narrative dead-end. The decision to put her in that position is explicable only if the makers of the show had made up their minds to tie up all the loose ends in advance of cancellation. Who on earth wanted them to do that, I don't know- don't we all want to imagine what comes next, to think of the characters as if they still existed and the stories as if they were still going on? A conclusion that wraps everything up is just a brush-off to the fans.