Morgan goes to the tower room and asks if Julia's in there. There's no response, so he asks if Gabriel if Julia is in there. Unbeknownst to Morgan, Julia is unconscious on the floor in the tower room. He pounds on the door and calls to Gabriel.

Morgan tends to Julia. He says Gabriel locked her in the tower room. He asks what happened to him. She says he fooled her. She says he seemed so normal, and asked her to stay and talk to him while he ate. She says she felt sorry for him. The last thing she remembers is turning her back on him. She says they need to lock him up forever. He says he's going to join Quentin and the servants in their search for Gabriel. 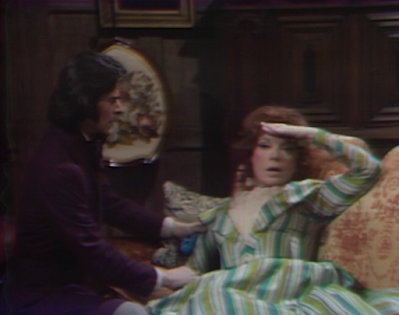 Tossing in her sleep, Daphne tells Bramwell that he has to take her away. She wakes, and he tells her they'll leave and start a new life as soon as she's better. He tells her the doctor will arrive from Boston tomorrow. She tells him that he belongs with Catherine because they are so much alike. She says he could never be completely happy with anyone else. He blames himself, and she tells him he must think about the future. He tells her there's no future without her. She reiterates that she wants he and Catherine to find happiness. 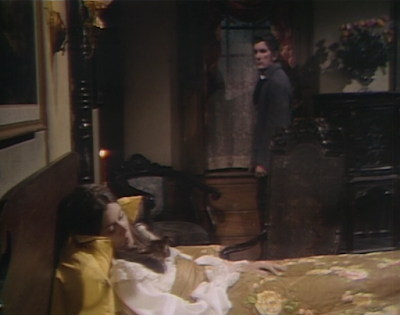 Catherine comes downstairs and finds Morgan. He asks if he's heard about Gabriel. He says he's about to join the search. She says she's going to the old house. He stiffens, and says he's surprised that she would want to be with Bramwell after what he's done — destroying Daphne. She refuses to discuss it with him further. She reminds him that her sister is dying, and then rushes out.

Bramwell is pacing downstairs when Catherine arrives at the old house. She asks how Daphne is, and he tells her that she's getting weaker by the moment. He tells her that there has to be a chance. He says the specialist will arrive from Boston in the morning. Catherine says she'll try to help Daphne with her will to live. Catherine tells him that whatever happens, they will look back on this time of their lives with a sense of shame. 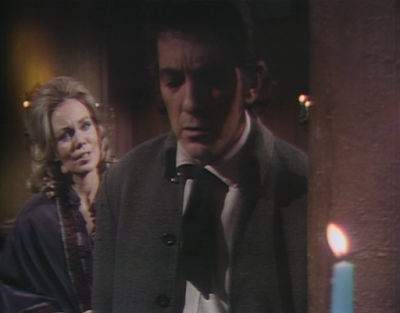 Daphne tells Catherine that she knows that she and Bramwell still love one another. She starts to breathe heavily and asks her to bring Bramwell. Catherine calls for him. He comes in and Daphne asks Catherine to leave them alone for a moment. Daphne tells him that she wanted to be alone with him. She says she doesn't want him to feel guilty about her. She reminds him that she has loved him. She then drifts away. Bramwell calls for Catherine. He tells her to get the doctor immediately. 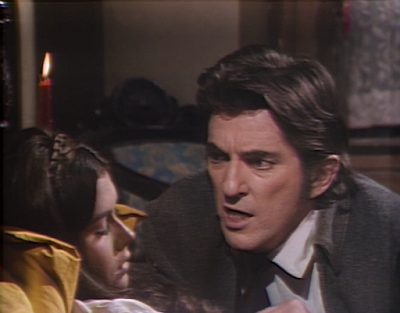 Morgan tells Julia that they still haven't found Gabriel. He says if Quentin finds Gabriel, he'll kill him. Julia is shocked. He explains that Gabriel made Quentin promise that he would do that if he ever went mad. Catherine arrives and tells them that Daphne is in a coma, and may never come out of it. She turns and runs upstairs. Morgan tells Julia that Bramwell is responsible for it, and he will pay. He regrets not killing him earlier. 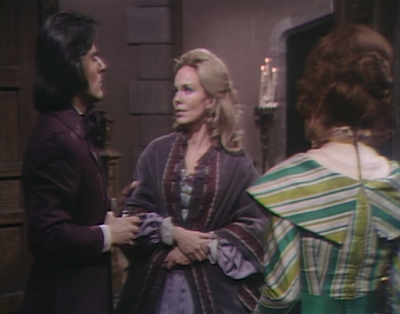 Melanie comes downstairs and finds Julia in the drawing room. She says she wants to talk to her right now. Julia asks her what's happened. Melanie says that before she interrupted them, Carrie was about to tell her who her real mother is. She says that Julia then went to the Stokes cottage and threatened her. She says that she knows Carrie and Julia both know who her real mother is. Julia says she hopes she can prove her accusation. Melanie asks her why she thinks the truth would be so damaging. Julia tries to dismiss her. Melanie asks her if she sticks with her story that her parents were both dead when she was adopted. Julia says she does. Melanie then says she doesn't need Julia, and she can find out who the items belong to, and shows her the items they found in the study. She says she knows Julia knows who the items belong to. Julia reiterates that she's not allowed in Justin's room. Melanie tells Julia that she can't trust her, so she will find out the answers on her own. 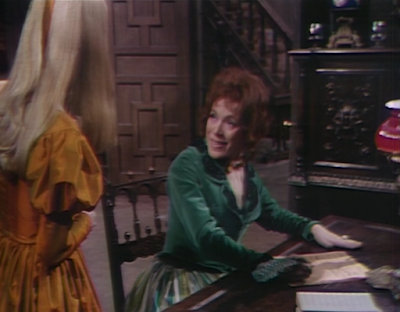 Morgan comes downstairs and goes into the drawing room. Julia is sitting by the fire. She asks about Catherine, and he says she was up most of the night, and is sleeping now. He asks Julia what's troubling her. She wonders how many nights until they'll need to hold the lottery again. She thinks that she'll be the one chosen. She asks him what happened to him in the room. He tells her to join him and they can go into the room together now. 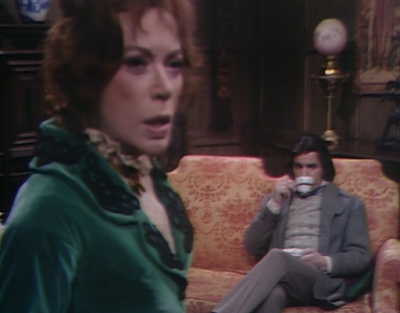 Julia and Morgan go into the room. Neither seem concerned that there are candles burning. Before they go into the next room, he tells her that what's inside isn't very pleasant, and confirms she wants to go in. She agrees. They go in and she is terrified by what she sees. 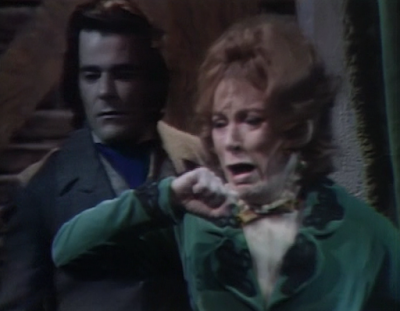 John: For someone at death's door, Daphne sure seems like she has been doing extremely well. And then, suddenly, she's in a coma.
Christine: Morgan is pretty callous. It's sad that Julia has to remind him to go comfort Catherine instead of getting worked up about Bramwell.
John: Julia keeps doubling down with regard to Melanie's parents... despite the evidence that Melanie continues to confront her with. I hope she's serious when she says she's not going to ask Julia about it again.
Christine: Maybe Julia is her mother.
John: Why is Julia suddenly talking about the Lottery again? It's once in a generation, not once a week! I do hope that there's something more interesting to be seen in that room on Monday than two skeletons.... maybe Gabriel's body?
Christine: Since when were two skeletons not interesting enough for you? I'd love to see the the skeletal bride and the wide-eyed skull make a final appearance together on the show.

Jonathan Frid does a great job with the opening narration on this one. It's crisply enunciated and urgently delivered. His voice sounds neither like Barnabas nor like Bramwell, but suggests someone else altogether. The rest of the episode is just terrible, but that is one fine job of voice acting at the beginning.

He sounds like Edmund Blackstone in Seizure, which is probably just his Jonathan Frid voice. Too bad he couldn't break away from Barnabas to make other movies beyond Seizure and The Devil's Daughter. He plays a mute chauffeur in the latter, which was rather a waste of his talent. Both are enjoyable, but Seizure is definitely the must see of the two.

Sometimes Bramwell sounds like Jonathan Frid, but the voice he uses in the opening of this one doesn't. It is a character unto itself.