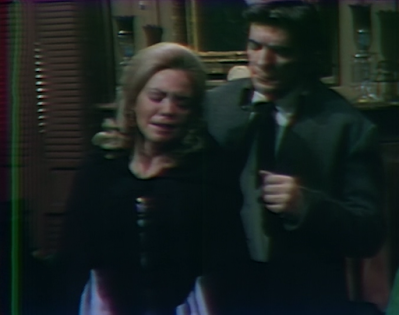 Kendrick and Carrie arrive at Collinwood. He tells her that he understands she can see and hear things that others can't. She says that sometimes she can. He asks if she can help him, and she explains that her father has forbidden her from ever using it again. Kendrick tells her it's Melanie who needs help. He explains that it would give Melanie great peace or mind to find out who her real parents are. Carrie says she thought they were dead. He asks her to put herself in Melanie's position, and begs her to help her. She tells him that her father might find out. He asks her to think of Melanie. 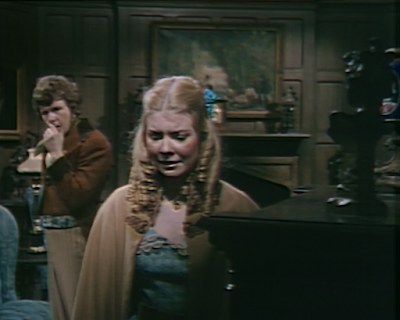 Daphne wakes to find Catherine by her side. Daphne tells her that she feels foolish; taking ill so suddenly. She asks what's troubling her sister. Catherine admits she's been unkind since she married Bramwell. Daphne tries to let her sister off the hook. She asks Catherine if she heard that Bramwell's ship has finally come in. She says that Bramwell told her she'd have everything she wanted. Catherine starts whimpering, and Daphne asks her what's wrong. 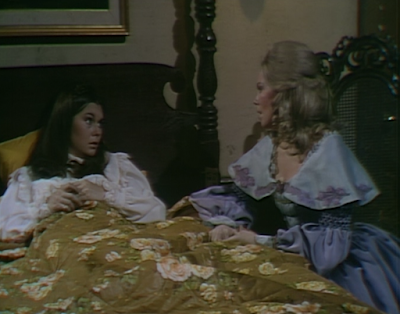 Melanie is thrilled to find Kendrick in the drawing room. She runs up and kisses him. He points out that she's had enough time, and reminds her that he asked her to marry him. She begins making excuses. He tells her that he's willing to accept all the risks. He tells her that Carrie has agreed to help find out who Melanie's real parents are, and determine if they are still alive. He points out that Carrie needs something that belonged to her parents. She says that if there's anything in the house, it will be in her father's study. 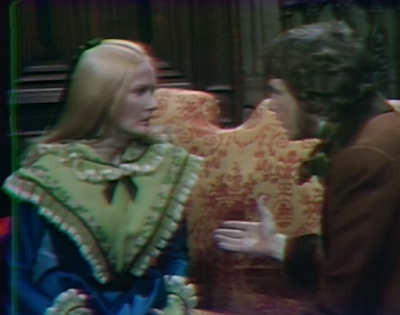 Catherine comes downstairs. Bramwell notices that she's been crying. She says she told Daphne it was due to her shame in trying to come between them. She says there has to be something they can do for her. He says the doctor said there was no hope whatsoever.

Melanie and Kendrick seach Justin's study. They don't find anything. Melanie suggests that after Julia found her there before, she may have destroyed anything that remained. He pulls out a drawer in a desk and finds something hidden in a secret compartment. In a box labeled Melanie, they find a lace handkerchief, a brooch, a bracelet, and a note saying, "the items are for Melanie when she grows up." They assume it's from her mother. He wonders why Justin didn't tell her about them, and she says after his stroke he probably forgot all about them. She has him put the drawer back so no one will know they were there. 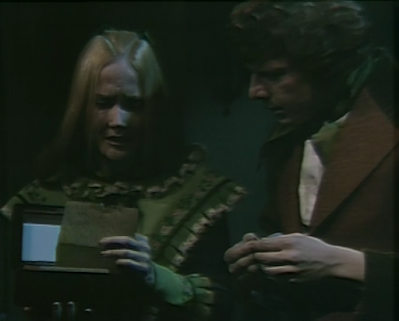 Bramwell checks on Daphne. She says he shouldn't spend his whole day with her now that his ship has come in. He tells her there's nowhere he'd rather be. She asks why he's sad. He says he's worried about her, and reminds her how she nursed him back to health. She points out that he can't nurse her back to health. He starts to tell her that he can, but stops. She asks if he knows that she's going to die. He asks why she would say that. She tells him that she knows it's true, and that she's not afraid. She tells him that she's known from the beginning. He tries to convince her that it's not true. She says it's easier for all of them if they don't have to lie to one anther. She asks him how much time she has. He says he has all the money he needs now, and can send for a specialist. She tells him they have to face this without fear. He tells her that he loves her. She says he told her that before, and she didn't believe he meant it, but she does now. He hugs her and tells her that he doesn't want to lose her. 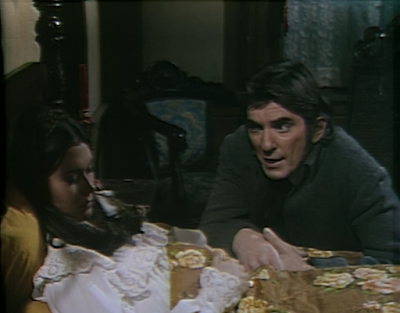 Carrie sneaks to Collinwood, and asks Melanie if she found anything from her parents. She shows Carrie the box, and she take the handkerchief. Carrie says that something's happening. She pictures a woman leaning over Melanie's father's coffin. She says he's dead. She then says that her mother is still alive, and somewhere very close by. 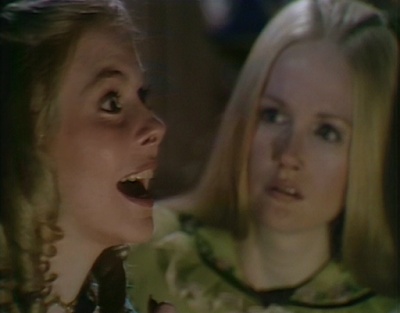 John: As we prepare for Daphne to die of a broken heart, is anyone else the least bit curious about the fact that Catherine is still, at least as far as we know, carrying around a mini-Bramwell in her belly? They'll be lucky if Daphne kicks the bucket before that bit of news lands in her lap.
Christine: Perhaps that will be what takes her out.
John: Why would items Melanie's mother left for her need to be hidden? They could have just as easily kept those set aside for her while maintaining the charade that her mother had died before she was adopted. I have to say, I'm getting tired of all this drama for drama's sake!
Christine: Well, duh, John. They were hidden so no random psychic could show up and use them to tell her who her real mom is. It had me wondering why her mother would leave such a random assortment of items for her anyway. It reminds me of Vicki clinging to the note her mother left with her when she dropped her on the doorstep of the foundling home in a cardboard box.
John: I think you were right about Josette being Melanie's mother. I can't wait to see how Bramwell reacts to the news.
Christine: Yes, but what we may have missed was that she was Barnabas' daughter! Carrie did say her father was in a coffin. I guess that rules out Justin, but doesn't explain why he'd want to take care of her. Unless he thought she was his daughter!
Posted by John Scoleri at 6:00 AM

I don't think Carrie's coffin comment rules out Justin at all. He is now dead, after all. Then again, who knows with this convoluted story line.

You are right. I expressed myself poorly. I was speaking from the assumption that Josette is Melanie's mother, and she wouldn't be leaning over Justin's coffin, which was what ruled out Justin for me.