Julia hears Morgan calling. She finds him and he says he's Forsythe, and Brutus is here, trying to send him back to the tomb He tells her that she must hear the truth of the curse, and what really happened in 1680. She begs him to tell her. He says that Brutus is here. He shouts that he will tell the truth about the curse. Julia asks how it all began. He explains that he met Brutus in 1677 — introduced by his sister Constance. He says they became business partners, but he found that Brutus was a man of many secrets. 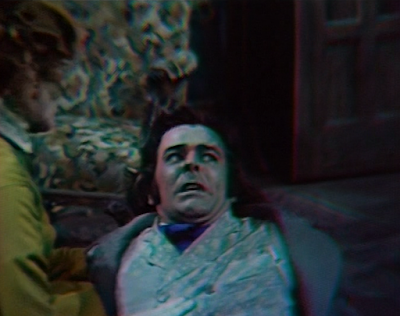 Brutus puts his papers away, and Forsythe enters. Forsythe says he's there to discuss their partnership. He brings up Brutus' strange fixation on the occult. Brutus says he's only a dabbler. Forsythe gets to the point and suggests that Brutus is getting richer while he's getting poorer. He accuses Brutus of stealing from him, and asks to audit the books. Brutus says the books are in the company office. Forsythe suggests that there is a separate set of books. Brutus tells him they will dissolve their partnership in the morning. Forsythe demands what is coming to him, and Brutus assures him that he will get what is coming to him in due time. 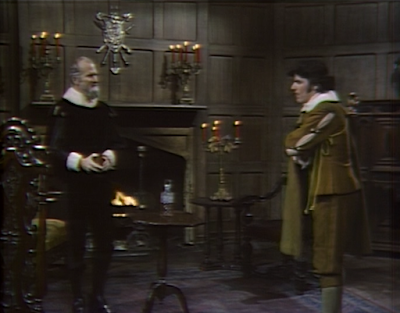 Amanda walks in as Brutus sends Forsythe on his way, telling his wife that they are ending their partnership. Amanda heads out, claiming she's going out for air. Brutus commands Constance to follow her. 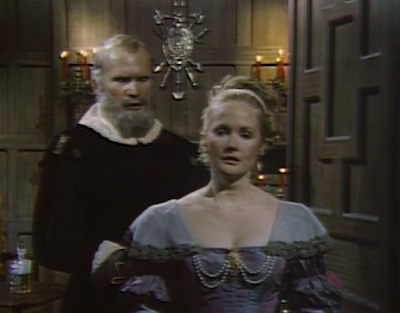 Amanda and Forsythe kiss passionately. She says she had to come to see him, and asks what happened between he and Brutus. He tells her that he knows Brutus is embezzling funds. Amanda suggests they check the books in the secret records room. She tells him that she knows where it is.

Constance eavesdrops as Amanda tells Forsythe where he can find the books.

Amanda warns Brutus not to be overconfident. He tells her that he's going to take her away from Brutus. They kiss once more. He arranges to meet her in the morning.

Constance tells Brutus that Amanda went to see Forsythe at the cottage, and they are planning to destroy him. 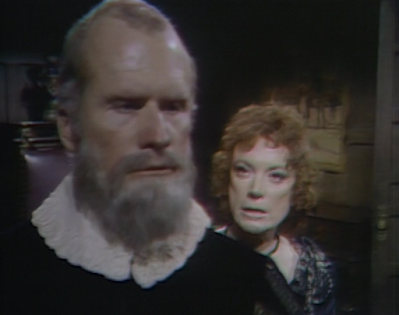 Forsythe sneaks into Collinwood. Brutus watches him from the shadows as he goes upstairs. Brutus breaks into the secret records room and goes inside. Brutus follows behind him. Inside the secret records room, Forsythe searches for the doctored books. He finds them and says it's worse than he thought. Brutus confronts him. Forsythe says he's going to the authorities. Brutus says he's more ambitious and aggressive than any of his family members. He says that neither his family nor Forsythe will testify against him, and grabbing a stick, he knocks Forsythe out. He says that he left him only one course of action. 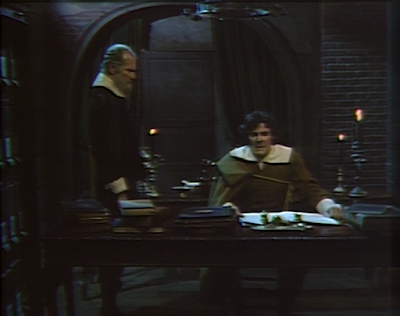 Standing over Brutus unconscious body lying on a table, Brutus tells him that he couldn't have known that he would become a victim of his interest in the occult. He adds that an ordinary death would not be good enough for him. He explains that he wants his spirit to be troubled through all eternity. 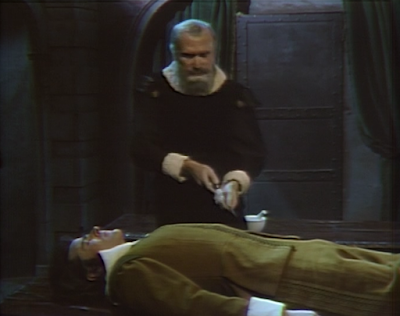 Amanda goes to meet Forysthe, and when he doesn't show up, she's sure that something is wrong. She runs into Constance, and asks her where Brutus is. She asks if he still intends to end the partnership with Forsythe. Constance tells her that Forsythe left  town early this morning. Amanda excuses herself to go to her room. 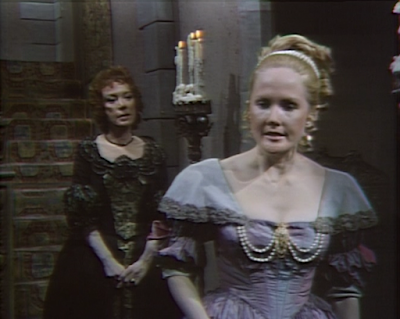 Amanda goes to the secret records room and finds Forsythe, unconscious on the table. Brutus comes out and points out that the lovers are together. She calls Brutus a murderer. He tells her that he's interested in poetic justice. He tells her that she will now be with Forysthe, and they will be together for a very long time. He chokes her, and says that he will put her body beside his, and her spirit will not rest either. 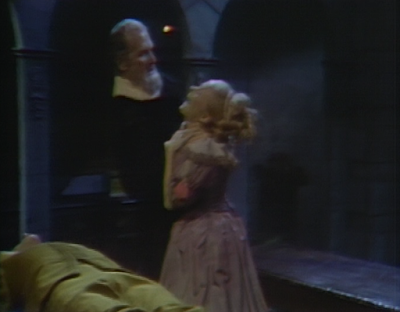 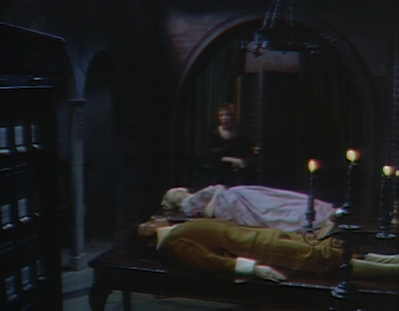 She leaves the room, and Brutus says they deserved to die for betraying him. He warns her not to turn on him. She says she always sided with him against his enemies, but they were right and he's a monster. She grabs a weapon, but he takes it from her and stabs her. She falls on the bed, and places a curse upon the family and future generations. He says it will bring death and insanity to all that inhabit this room. He explains that it shall not end until someone spends the night in the room and retains their sanity. 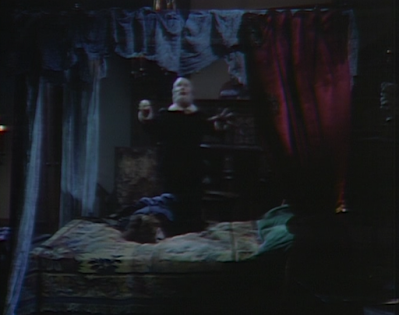 Forsythe finishes telling the story to Julia (including the parts that he was dead during). She realizes that Brutus cursed his own ancestors. Forsythe hears a noise and says Brutus' spirit is back. Brutus ghost materializes, and commands him to return to his tomb. He chokes and collapses. Brutus assures Julia that the curse will go on, and that the truth will not help her. 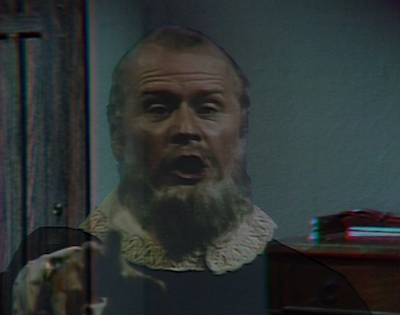 John: How convenient that James Forsythe happened to look exactly like Morgan, to whom he is not even related.
Christine: Well, we don't really know that, do we? Perhaps he fathered a child with Amanda and she passed it off as a Collins.
John: Oh my, the acting. Brutus comes across like a Shakespearean summer stock reject. Let's just say that Brutus Collins is not the finest performance Louis Edmonds gave in his Dark Shadows tenure and leave it at that. And poor Grayson Hall... I wonder if all the retching today was triggered by her reading the script... 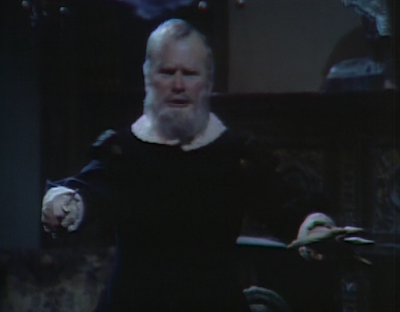 Christine: I rather enjoyed his malevolent performance. I think he was doing the best he could with the material he was given.
John: What a sad, rushed and pedestrian explanation about why and how the curse was placed on the family. It wasn't particularly convincing for Brutus to spell it all out, and then explain the 'rules' and manner under which the curse would end... all of which was spoken purely for the viewers at home, since everyone else around him was basically dead!
Christine: It was pretty weak, indeed. And if he was going to punish the family for turning on him, he sure picked a weird way to do that. What a nut job! I wonder if this is when they received notice that the show was cancelled and they decided they'd better wrap this bit up quickly and try to bring some sense of closure to the show. The whole episode seemed rushed.
Posted by John Scoleri at 6:00 AM

Plus that they are living in a place that in historical 1680 shouldn't even exist but sometimes I like to think of Collinwood as an entity that defies all law of physics with people,portraits,and objects that have been misplaced in time.

I wondered the same thing, shouldn't they have been at the Old House, not Collinwood?

Brutus' motives sound like they're out of two or more COLUMBO episodes. Especially in a way "Any Old Port In A Storm," which is fitting since that one has horror story undertones.

Nice catch! I like to think that the Collins family parallel time travelers may be transporting objects back and forth through different periods and bands. Perhaps Petofi's hand is still In that box on Brutus' desk. It's possible that someone traveled back to the 1600s with Jeremiah's plans for Collinwood and had it built sooner, though it's much harder to explain the Collins family being there before Isaac Collins arrived in 1690 to found the town of Collinsport!

I'll have to check that one out, Grant. I've only just begun to watch episodes in the COLUMBO set.

In searching the online newspaper archives, the earliest printed mention I can find of Dark Shadows being cancelled is March 2, 1971. So, it looks like they had at least a month's warning that the show was indeed ending.

Who knew that Brutus was actually a serial killer, and a proficient one at that! I'm happy to see Louis Edmonds get one more juicy role, however brief. Watching this train wreck of an ending storyline, I'm actully glad that KLS kept driving in that car with Sebastian Shaw, never to be seen again.

Thanks for doing the research on that, Paul. We've been wondering when they knew the show was cancelled and I hadn't been able to find any information about it.

The fine folks at the Collinsport Historical Society posted about this last year. http://www.collinsporthistoricalsociety.com/2020/04/who-killed-dark-shadows.html

Who would have thought that PASSWORD would be the replacement for DARK SHADOWS!