Flora waits for Gabriel in the gazebo. He arrives, and it appears he's hiding a knife behind his back. Flora is startled. She tells him that he looks tired. She assures him that the worst is over, and approaches him. He turns away from her and says he's got to keep moving. Flora tells him that she can't deny he failed the  family, but now's not the time to dwell on that. She asks him to come home with her, and he says that he'll be found. He says he's leaving the country. He tells her that her jewels will help him. She says she'd give him anything he needs if it would help. He tells her she talks too much. He raises the knife and demands that she give him her jewels. He tells her that he hates her. He then asks what she's doing there. She says he asked her to meet him. She reminds him that she's his mother. He tells her that he's going to kill her and everyone else. He approaches her with the knife raised. 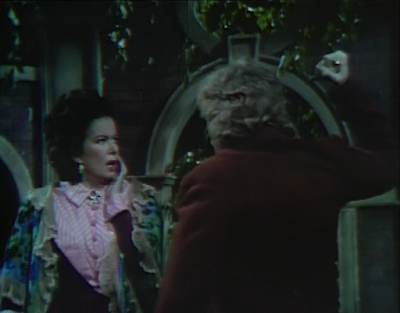 Kendrick knocks him out and tells Flora to run away. Gabriel gets up and attacks him. Kendrick wrestles the knife from him and stabs him. Flora says that he killed him. 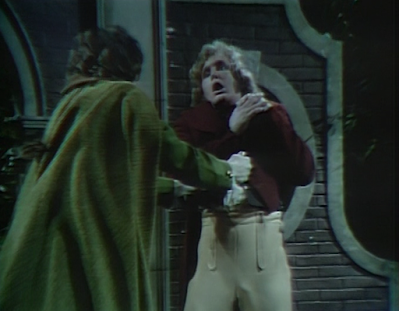 Quentin goes to Melanie's room and pounds on the door. He asks her to come out, and she tells him to go away. He says she can't lock herself up because Kendrick knows about her condition. She says she killed his sister. Quentin tells her that she can't blame herself. She says she's a mad Collins', and she won't leave the room. She tells him to leave her alone, and go find their mother and Gabriel.

Flora sees that Gabriel is still alive. Kendrick says he'll pay for Stella's murder. Flora says he didn't kill Stella. She says she knows. Kendrick asks who killed his sister, if not Gabriel. Flora says she doesn't know, but she knows it wasn't Gabriel. Quentin arrives and tells Kendrick that he should go. He tells Flora that he'll be back. Quentin checks on Gabriel, and helps him up. 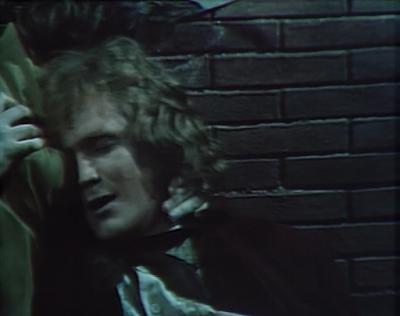 Kendrick arrives to see Melanie. She lets him in and he tells her that he loves her. He says they're going to face her attacks together. She assures him there's no happy endings for a Collins. She says he might find out other things about her. He tells her that she can tell him anything, and it won't make a difference. She says she can't harm anyone as long as she doesn't leave her room. He tells her that she's going out with him tonight. She asks what will happen when her attacks come. He says they will face them together. He begs her to come out with him tonight. She says she has to think about it. He assures her that unlike his sister, she still has a chance if she'll take it. 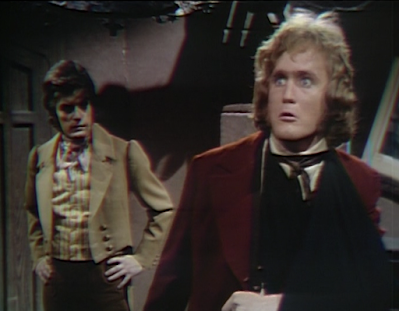 Flora asks about Gabriel. Quentin tells her that he was about to tell him what he needed to know, and then he had an attack and tried to kill him. Flora tells Quentin that she has to talk to Kendrick. Quentin offers to go talk to him. He says he's going to tell him a few things, including that Melanie, nor any family members, had anything to do with his sister's death. 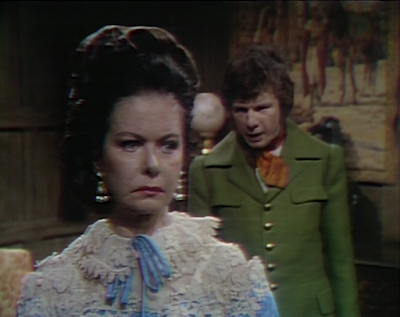 John: It wasn't quite clear if Gabriel was having an attack when he attempted to kill his mother. If he just needed jewelry to fund his getaway, you'd think he'd just take it, as opposed to threatening her life. Considering that Kendrick basically saved her life, Flora might have been a little more gracious towards him.
Christine: I loved how Quentin told him to sit down and shut up when he started having another attack.
John: How exactly did Kendrick get into the house to see Melanie?
Christine: Well, if it's like Collinwood in all other time periods, then he probably came in through the unlocked front door.
John: I love how Gabriel had an attack right before telling Quentin what he wanted to hear. Do you think we'll ever find out what's in the room that causes family members to die or go insane?
Christine: I don't know that we will ever find out since it probably won't be quite as terrifying and horrible as its been made out to be. Unless it turns out to be Pansy Faye singing "I Wanna Dance With You" on an endless loop. That could be traumatic enough to cause insanity or death. 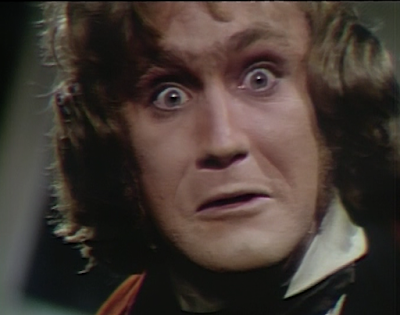