Catherine says that Morgan went into the room to save her. He tells her that she is the only one he will ever love. He leans in to kiss her, unaware that Daphne was watching from the shadows. Catherine pulls away and says she can't do it; that it will only lead to tragedy. He asks her to say it, and she tells him that she will always love him, but it changes nothing. He is married to Daphne, and she is married to Morgan. He leaves her. 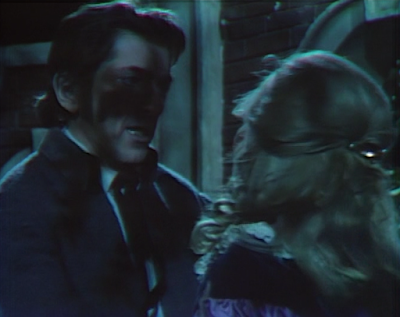 Morgan reviews the vase from which the lots were drawn for the lottery. Julia comes downstairs to find him in the drawing room. She asks what he's doing with the vase, and he replies that she asks too many questions. She mentions that it was used for the lottery. He puts his hand to his forehead, and mentions that he gave the vase to Brutus for Christmas. He refers to Julia as Brutus' sister Constance, and says she introduced them. Julia asks him why he's so bitter. He tells her the two of them are just alike. She asks why he hates them. He tells her that she knows why he hates them so much. He tells her to stay away from him, and leaves the room.

Daphne returns to Collinwood, upset. She replays Catherine's comments to Bramwell in her mind. She opens a box on a desk containing two dueling pistols, and takes one out. She raises it to her forehead when she hears the front door. She puts it back before Bramwell walks in. He's surprised to see her. She's surprised to see him as well. He tells her he came back to speak to Flora. She tells him that she took an enlightened walk this morning, and came to speak to Catherine. She asks if he knows where she is, and he says he does not. She tells him she'll wait for her. He asks if she's alright, and she asks him if there's anything wrong. 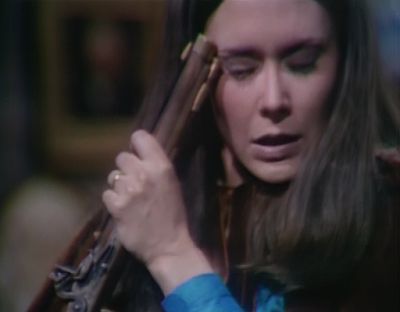 Julia and Catherine come downstairs. Julia tells her that Morgan warned her not to follow him. They find Bramwell and Daphne in the drawing room. Bramwell asks what she was saying about Morgan. Julia says that he thought she was Constance Collins, Brutus' sister. She said he became more hostile. Catherine says someone must find him. Julia says if they found him, they could find out more about the curse. Bramwell offers to go looking for him. Julia leaves Catherine and Daphne alone in the drawing room. Catherine tells her sister that she doesn't know what she's going to do. Daphne asks if she means about Morgan. Catherine is confused. Daphne brings up how she warned him about marrying Bramwell. She then tells Catherine that she'd like to be alone. Catherine leaves her. Daphne goes back to the box with the revolvers. She takes one out, but decides that she can't do it. 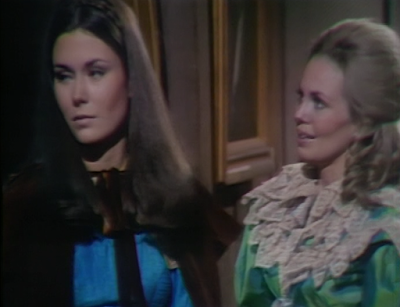 Morgan arrives at the cottage and calls for Amanda. He sits down in a chair in the dark.

Daphne is sitting by the fireplace when Julia returns. She asks if she's been there all day, and Daphne says she left and came back. Julia asks if she's upset about Catherine and Bramwell meeting in secret. Daphne asks how she knew. Julia explains that she tries to keep in touch with everything that's happening. Daphne tells Julia that she loves Bramwell, and must find a way to win his love, because she can't live without him. Julia assures her that he will learn to love her.

Carrie returns home, and is shocked to find Morgan there. He tells her to turn on the light, and when he sees her, he calls her Sarah. He asks what she's doing there. She's confused. He tells her that he wouldn't harm her. He asks her why she came there. He asks if she has a message from Amanda. He asks if Constance if trying to stop her. Carrie says she doesn't know who he's talking about. He's convinced that Constance is responsible, and swears to put an end to her treachery. He leaves her. 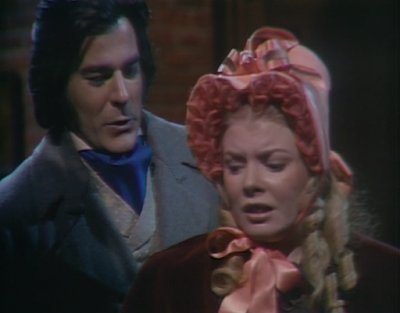 Julia brings tea to Daphne. Daphne thanks her for being so understanding, and Julia explains that she's known for speaking her mind, even though that doesn't always make her popular. She tells Daphne that this will be a difficult period for her. Bramwell returns, and says he did not find Morgan. He asks Daphne if she's been there all day, and she tells him that she didn't want to be alone She goes upstairs to tell Catherine goodnight. He tells Julia that something is upsetting her. Julie replies that it's nothing that being a proper husband couldn't cure. He asks what she means, and she spares him a lecture. She says he could be kind to her. She points out that she'd like some of the love he promised her when he married her. Catherine and Daphne come downstairs, and Dapne asks if he'll accompany her to the old house. He does. 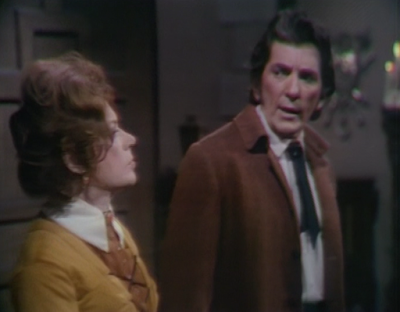 Outside, Bramwell asks what she told Julia. She says she said a great many things, and they go to know each other. They leave, and Morgan steps out of the shadows with a rope, ready to strangle someone.

Julia takes Catherine into the drawing room. She tells her that Daphne is unhappy. Catherine says she's aware, but there's nothing she can do. Julia tells her that she can stop seeing Bramwell, and stop encouraging him to see her. Catherine is shocked at the accusation. Julia says she knows they have been meeting secretly. She tells Catherine to come to her senses before it's too late. Catherine tells her that she's had enough of her lectures and moralizing. She tells Julia that as long as her conscience is clear, and that she is faithful to her husband, she shall do as she pleases. She storms out of the room.

Morgan comes back into Collinwood with his rope. He sneaks up behind Julia and puts the rope around her neck, choking her. 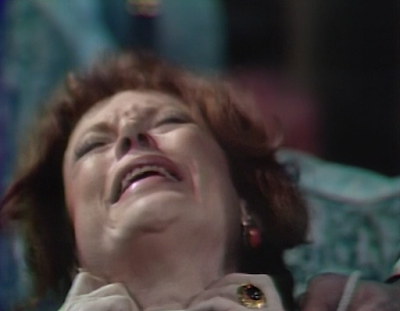 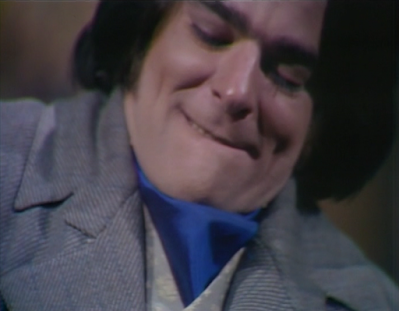 John: As if parallel time weren't enough, we now have to deal with historical parallel time characters to add to the mix.
Christine: If James Forsythe hates the Collins family so much, then why is he staying at their home? What caused him to suddenly forget that he found Sarah's corpse in the cellar of the cottage?
John: How interesting for Julia to be the one offering up relationship advice to Bramwell. Thankfully, there's no trace of affection between them in this parallel time band.
Christine: Julia Hoffman and Barnabas' affection for one another carried the show through thick and thin. Now you've made me miss those two characters. This parallel time would be more palatable if they were around trying to fix whatever they thought was broken and screwing things up royally.
John: Julia was right when she pointed out that she's one to speak her mind, damn the consequences. It looks like Daphne has a new ally, and Catherine a new enemy, as a result. Unless, of course, Morgan/Forsythe does away with her...
Christine: Who's going to save Julia? I wonder now if Carrie's vision of Daphne's grave will come to pass, or if Daphne will use one of the dueling pistols on her husband and sister.
Posted by John Scoleri at 6:00 AM