'Morgan' comes upstairs from the cellar with a book. Julia and Catherine arrive and ask what he's doing. He tells them he goes where he pleases. Julia asks what he did to Carrie. He tells her that he did nothing; that she just went into a strange state. Julia rouses her, and she says she knows who he is: James Forsythe. Julia says he's the one who put the curse on the Collins family. He says James Forsythe had nothing to do with the curse. He does admit to being James Forsythe. Catherine tries to convince him that he's Morgan. He tells her that Morgan is dead, and will never come back to her. Julia tells him that they have Forysthe's ledger at Collinwood. He holds up a book and says that he has found all that he is looking for, and walks out. 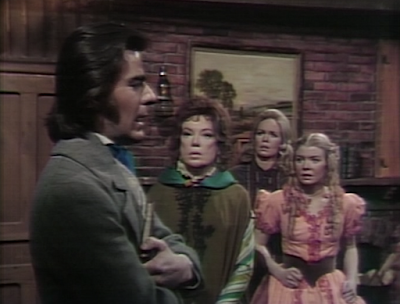 Daphne is in the old house when Bramwell returns. She asks where he's been. He asks if he went to Collinwood, and if Catherine is alright. He says that she is; that Morgan took her place in the room, and he survived. He says he couldn't get more details from Julia. Daphne asks him what else is troubling him. He tells her that he's not in a mood  to talk, and she points out that he hasn't been in the mood since they got married. She implores him to talk to her. He says it doesn't concern her. It happened before the duel that brought them together. She asks if it's Catherine, and then adds that it's always Catherine. 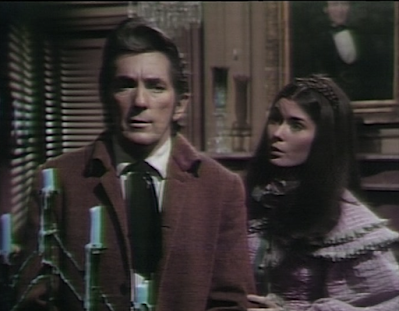 Forsythe reads from the book, referencing a Sarah, saying that she is the soul of treachery. The writer is Brutus Collins, who appears to have killed and buried Sarah. He says that he now knows what he must do, and tonight he shall attend to it.

Julia asks Catherine if she now believes in the curse. Catherine asks her if she thinks Morgan will go on like this from now on. Catherine feels faint, and tells Julia that it must be everything that's happening getting to her. Julia asks her if she's sure that's all it is. Julia tells her to sit down, and goes to get her smelling salts. 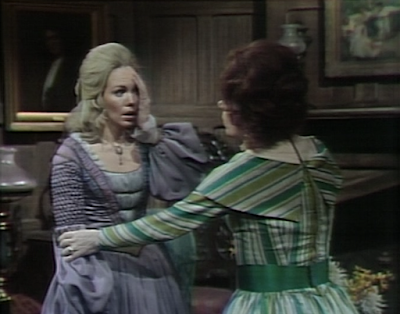 Bramwell comes in and finds Catherine sitting in the drawing room. He closes the doors. She asks if he's seen Morgan. He asks her what happened last night. She explains that Morgan came out of the room possessed. He tells her that he knew she would find nothing but misery in the house. He asks if she intends to bring up their child in the house he hates so much. Julia comes in and asks why he's there if he hates the house so much. He asks Julia if anyone is looking for Morgan. Julia asks why he's suddenly so concerned. He leaves, and Julia asks Catherine if the two of them still have secrets between them. Catherine denies it. Julia asks what Bramwell was talking about before she walked in. She reiterates that Catherine should not see him alone. She explains that Bramwell has never come to the house on her invitation. Julia gives her the smelling salts, if she needs them, insinuating that she doesn't. 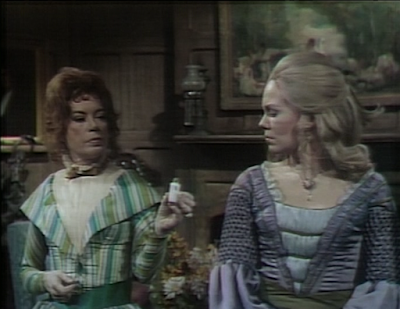 Forsythe sneaks into the cottage and knocks something over, waking Carrie. She asks what he's doing there. He explains that he wants to turn back time. He asks her if the rooms are inhabited by the spirit of someone who was brutally murdered. She says she has not, and asks who he's referring to. He says Sarah Forsythe, and he doesn't know where she was buried. He says he knows that she's buried there someplace. Carrie tries to run out, but he grabs her and locks her into her room.

Bramwell returns to the old house. He tells Daphne that she shouldn't have waited up. He says he found out about Morgan — he's in a state of possession, and they can't find him. He tells her that he's too tired to talk, and goes upstairs. She asks if he told Catherine what's bothering him, or if she already knew. He says she has no right to make such an insinuation. She asks why he had to see Catherine alone, saying she could have gone, too, considering she's her sister. She suggests that he still loves Catherine. He tells Daphne that if she wants to leave, she can go. If she wants to be his wife, she has to stay.

Forsythe is in the basement of the cottage where he has exhumed a body. A wind blows through the room, and Forsythe says he knows Brutus is there. He demands that he show himself so he can fight him again. He calls for Brutus to show himself, and finds himself face to face with him again. 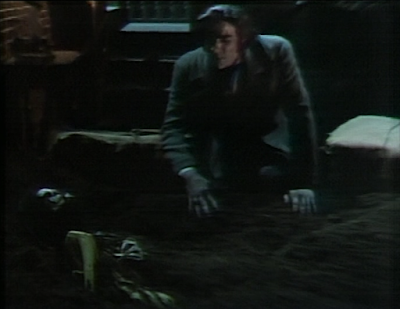 John: What's with Forsythe initially referring to himself in third person? Do you think it was scripted that way, or just the actor blowing his lines?
Christine: Probably the latter, though it's possible that Morgan is bleeding through.
John: Always nice to see the skeleton(s) get some work, even if only in a parallel-time grave. Wouldn't you expect that if there were a body buried in the cellar of the cottage, someone with Carrie's abilities might have sensed it? 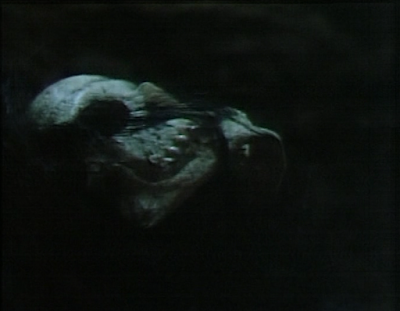 Christine: I think Carrie is a fledgling psychic who only had rudimentary training with the great Gerard Stiles. Her abilities are definitely hit and miss.
John: Do you suppose Brutus will be a familiar face? I know I've already complained about this broken branch of parallel time, but does anyone really care about why Brutus and Forsythe have some 150-year-old beef?
Christine: It's likely Brutus is someone familiar since he was so carefully kept from view today. It is difficult to be interested in Forsythe and Brutus, even with skeletal remains on hand. I found myself missing Julia Hoffman, Barnabas, and the original Collins family clan today.
Posted by John Scoleri at 6:00 AM