Kendrick arrives at Collinwood to see Flora. She says she has nothing to tell him. He says he's come to take Melanie out. She says that's impossible. He says he intends to help her. She says that only the family can take care of her. Kendrick offers to help. He says they must work together. He asks who killed his sister. She says no one had any reason to kill her. He asks who did it. She says she doesn't know. Melanie comes in and begs her mother to tell him. Kendrick asks Flora what Melanie is talking about. She says Melanie is prone to hysteria. Melanie says that he must hear that she killed Stella. She tells him that she's sorry. He asks how it happened, and if it was an accident. Flora sends her to the study. She asks Kendrick what he expects to learn from a girl who imagined everything she just told him. He says that his sister was killed, and asks what would make Melanie say that. Flora asks how many disturbed people have confessed to crimes they didn't commit. She suggests that Kendrick's recent attentions have frightened Melanie. He refuses to take the blame or Flora's explanation. He asks where Melanie was when Stella was killed. She says she doesn't know when his sister was killed or by who. She says goodbye and sends him on his way. 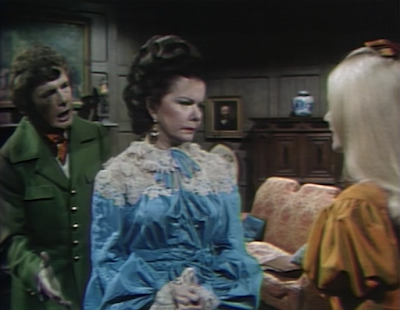 Melanie is hysterical. She thinks Kendrick is gone forever. Flora says she couldn't have killed Stella, and Melanie replies that the demon inside her could have. Flora says that if the police come, she's to deny anything.

At the old house, Bramwell is sitting by the fire when Daphne returns. She asks to speak to him. She reminds him that he gave her the choice of staying with him and be his wife or leave without him. She tells him that she has decided to stay, and hugs him. She says they can make their marriage work. He breaks away from her and excuses himself. He rushes upstairs. 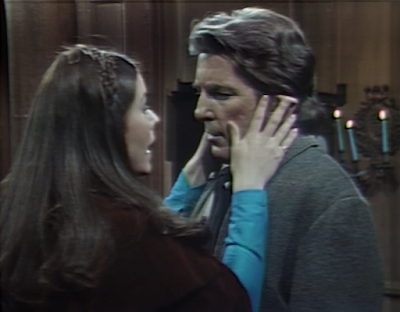 Melanie is alone in the gazebo when Kendrick arrives to see her. She tells him that she's guilty. She says she knows she killed Stella. He tells her that she didn't kill Stella, no matter what state she was in. She tells him that Julia stopped her from stabbing Catherine the first night she stayed in the house. He tells her that he loves her, and that they are destined for one another. He says the truth will come out about her attacks, and about Stella's death. He tells Melanie that he came to marry her — as quickly as possible. He asks if she loves him, and she says that she does. They kiss passionately. He promises her a good life together, and asks her not to be afraid. She tells him that she is terribly afraid. 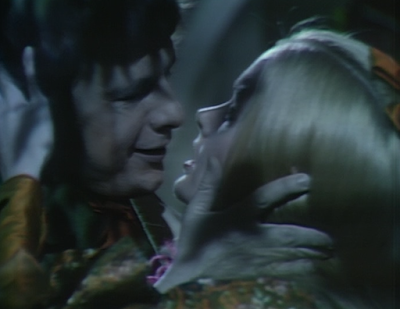 Catherine comes downstairs and finds Flora in the drawing room. Flora asks how Morgan is. Catherine points out the James Forsythe has taken over Morgan's body. Flora says they must continue to think of him as Morgan. Catherine asks if she truly thinks that stranger is her husband, or Flora's son. Catherine says that this is a fate worse than death. Flora tells her to be patient, and accept what is. Catherine reminds her that he hates them all. Flora reminds her that Morgan sacrificed himself for her. Catherine says that she doesn't have to remind her what she owes Morgan. Catherine tells her that she'll never understand the Collins'. Flora points out that she too is a Collins now. 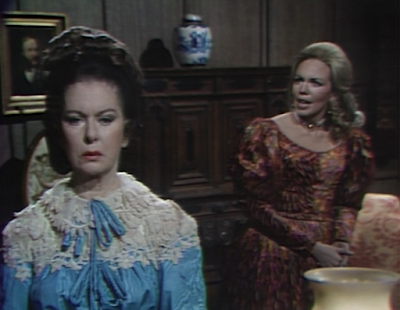 Daphne is sitting by the fire when Bramwell comes downstairs. He tells her that she should go to bed. He explains he's going to the village on business. She says everything is closed. He tells her that the taverns on the waterfront will be open. He wants to check on his ship. She asks him to wait until morning. When he says no, she asks if she can go with him. He brushes her off and leaves.

Bramwell comes to Collinwood. Flora lets him in, pointing out how late that it is. He expresses his concern for Morgan. Flora suggests that his concern for Morgan doesn't rind true. He offers that he has compassion for Morgan, and she counters that he has no compassion for Morgan — but for his wife Catherine. And she tells him that she will not have that. He admits that he is concerned about Catherine, too. Flora points out that he is married to Daphne, and Catherine is married to her son. She asks him to stay away in the future. Bramwell says that Catherine has become a Collins possession now. Flora explains that she is married to Morgan. She tells him to go home to his wife. He tells her that he can't let her destroy Catherine the way they will destroy themselves. He bids her goodnight and leaves. 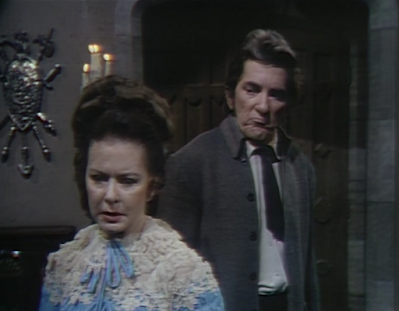 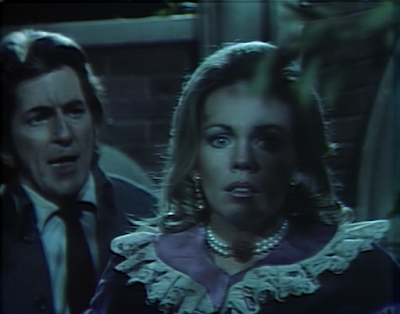 John: Oh, Daphne. You sure drew the short end of the stick when choosing Bramwell. I hope that Jonathan Frid enjoyed the opportunity to play a role so different than Barnabas. I must admit, I'm surprised that Bramwell has yet to chart on the delivery-end of our slap tracker... 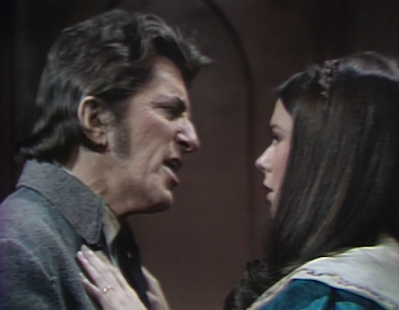 Christine: Bramwell is no slapper. He's more of a fisticuffs kind of guy.
John: It seems to me that Kendrick would be willing to accept the fact that Melanie might have killed Stella during one of her episodes... wouldn't it be easier to say that she was responsible (even if not true)? Otherwise, killing him may be the only way of getting rid of him.
Christine: It was hard to believe he'd just blow it off without any real evidence that she wasn't responsible for Stella's death, other than believing she's made of sweetness and light, even while possessed by an evil, death spewing, knife wielding entity.
John: Honestly, was anyone surprised to see Daphne spying on Bramwell and Catherine's encounter at the gazebo? Talk about telegraphing the punch. I'm beginning to think that this version of parallel time is set firmly in the the land of traditional daytime soap operas...
Christine: I think you're right on the mark, which means we've come full circle.
Posted by John Scoleri at 6:00 AM