Jamison finds the coffin in the cellar of the old house, and says that what Dirk said is true. He starts to lift the lid, when he hears a noise upstairs. 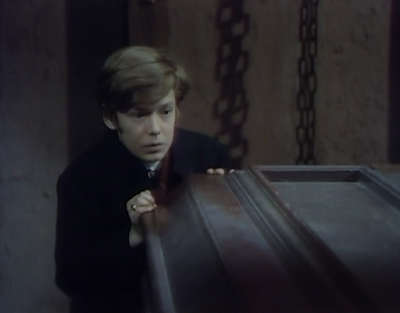 Barnabas sits Dirk into a chair in the old house, blood dripping from his neck wounds. 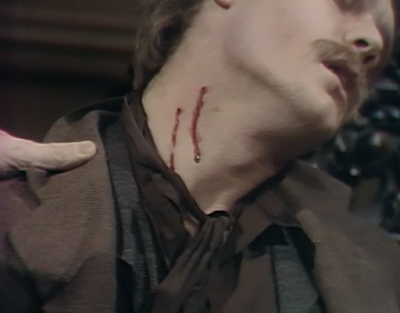 Jamison hides in the cellar.

Barnabas tells Dirk hes going to sit in the chair until Barnabas tells him to move. Dirk asks him if he's going to kill him, and Barnabas says that for now he's of more use to him alive than dead. He wants Dirk to undo the damage he's done by finding Jamison and telling him that everything he said to him was a lie. 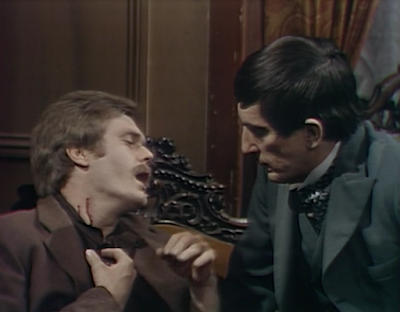 Jamison comes out of hiding in the basement.

Barnabas tells Dirk that he has no will of his own, and will only do his bidding from now on. Dirk suggests that Jamison may have told someone of Barnabas' secret. Barnabas says that if he did, he will kill Dirk. 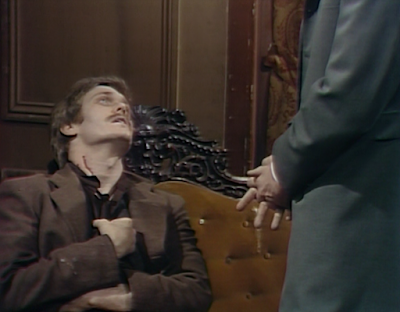 Making his way up the stairs, Jamison trips. He hides behind the cellar door, and when Barnabas heads downstairs, he sneaks out. 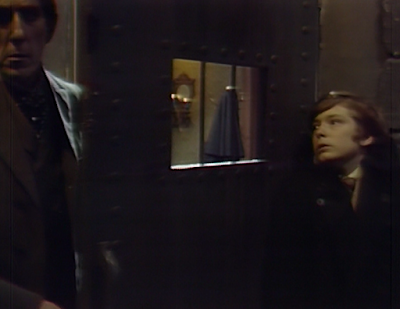 In the cellar, Barnabas asks who's there. He walks around and finds no one. He heads back upstairs.

Dirk tries to get comfortable. Barnabas comes in and tells him that he will go where Barnabas wants. He opens the secret panel behind the bookcase and puts Dirk inside. 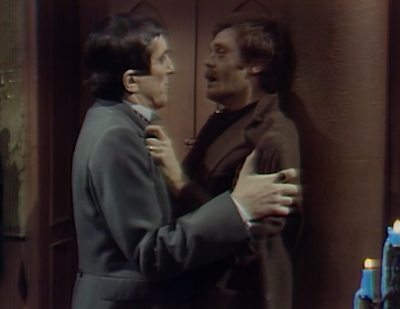 Jamison arrives home looking for his father. Beth says he's in Collinsport. David asks if he can call him. Beth takes him by the arm, but Jamison pulls away and says he will wait all night so he can speak with his father.

Beth tells Jamison that his father will not just be angry with him, but with her as well. She asks him if he was frightened by what he saw outside. He says he can only tell his father. Jamison goes upstairs, and Beth leaves the house. 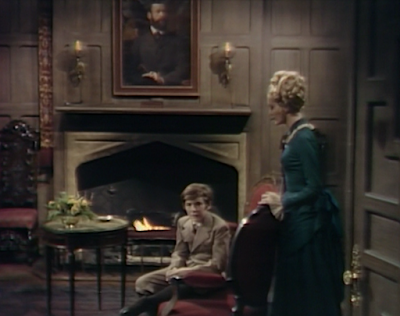 Barnabas checks on Dirk. Dirk moans, saying that something is wrong. There's a knock on the door. He leaves the secret room to answer it. 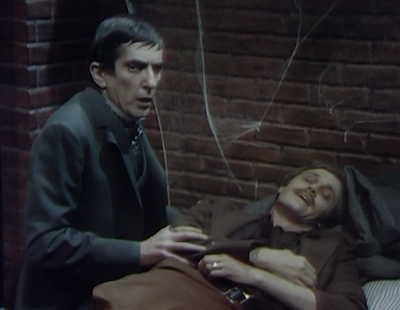 Beth enters and says Jamison returned to Collinwood, and that she thinks he believes whatever Dirk told him. She asks if Dirk is under his control, and Barnabas says that he went too far with Dirk. Beth asks if he'll die, and Barnabas confirms it. He tells her not to grieve for him, as he nearly destroyed everyone at Collinwood. She asks what Barnabas is going to do. He tells her he cannot afford to alienate Jamison, as he's important to him. She asks why, and he says she couldn't understand. She asks if he's going to let Jamison tell Edward everything, and he assures her he will be prepared to deal with Edward. 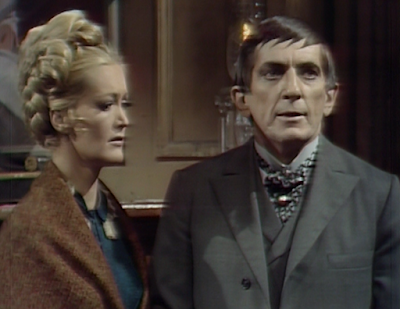 Edward returns to Collinwood. Jamison runs to him and says he waited up because he needs to talk to him. Edward asks what has frightened him. Jamison says that his cousin Barnabas has a secret. Edward asks what it is, and Jamison says that he is a vampire. Edward is not impressed. Jamison says he found a coffin in the cellar of the old house. Edward says that he blames the fool Dirk for leading him astray. Jamison tells his father that he can go to the old house and see for himself. He agrees, and says he will go after taking Jamison upstairs. 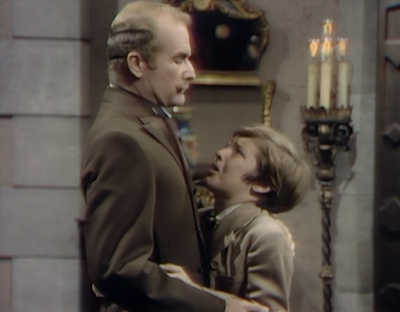 Barnabas tells Edward that he's shocked that he would give credence to Dirk's story. Edward says that Jamison was truly frightened. He says he wants to give Jamison the benefit of the doubt, and asks to see the cellar of the old house. He adds that Jamison says he was there earlier this evening, and saw a coffin. Barnabas asks if he requires more than his word, and Edward insists. Barnabas takes him downstairs to the cellar of the old house. No coffin is present. Edward says he doesn't understand what has happened. Barnabas suggests that Dirk was trying to get revenge on the family for being dismissed. Edward says he doesn't think the stories are as wild as Barnabas thinks they are. Barnabas asks if he truly believes there is a vampire in Collinsport. Edward says that after what happened with Laura, he is not so quick to dismiss the supernatural. He points out the several people around town have had marks that could be from a vampire. He says he plans to find Dirk and ask him what excatly he told Jamison. 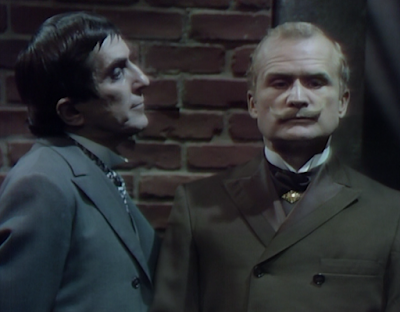 Edward leaves the old house, and Beth comes downstairs. Barnabas comes upstairs and says that he's safe for now, but Edward is investigating whether there might be a vampire. Barnabas says that Edward needs a vampire, and he will give him one. He says he will turn Dirk to a vampire, and ensure that Edward finds and destroys him. He asks Beth to stay with Dirk until he turns, and opens the secret panel. Dirk is nowhere to be found. 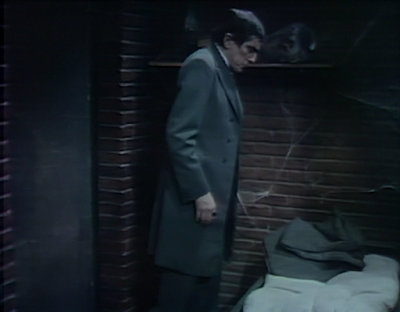 John: Was this the first time we've seen a bloody neck wound? And on a man, no less?

Christine: It's definitely not the first bloody neck wound, nor the first on a man, though this is the first one perpetrated by a man on another man. So now we know that Barnabas and Dirk have been intimate. 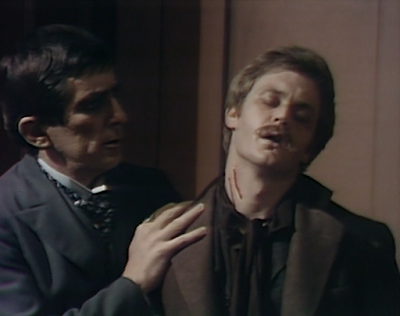 John: Interesting that Edward has an open mind now when it comes to the supernatural. And also that he was so quick to start putting the other clues that might corroborate the presence of a vampire in Collinsport.

Christine: I think we heard the word vampire more today than we have in the whole series up to this point.

John: So let me get this straight. Barnabas was going to turn Dirk into a vampire, and then leave Beth with him to be there when he turns? So she can be his lunch? Fortunately, the supernatural events took so much of her focus that Beth didn't ask about the secret room Barnabas introduced her to.

Christine: He no longer needs Beth now that he's got Dirk for a vampire servant. I'm sure he hasn't forgotten how ineffective she was at protecting him while he slept recently.