Quentin finds himself before Dameon Edwards who says he wants him to know how it will end. He leads him to a door and opens the door. Inside, Quentin's body is hanging from the rafters. Quentin picks up a note saying, "I had to do this to be with the one I love." Dameon laughs at him. 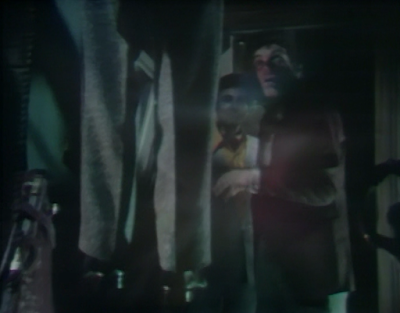 Quentin wakes from his nightmare and goes to pour himself a drink. He stops and calls to Dameon, asking if it's all a dream. He decides to go upstairs to the attic. After he does, Dameon comes out of the drawing room. 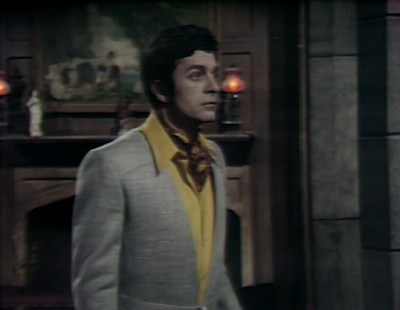 Quentin searches the attic for Dameon, asking what he's trying to tell him. 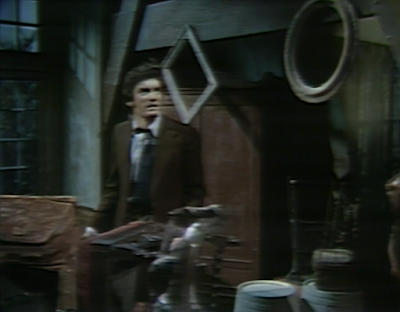 Hannah tells Angelique that the Tarot cards told her nothing. She adds that their silence frightens her. Angelique says that she'll tell her what to do. Hannah points out that she looks frightened. She says she's annoyed, by Dameon, whose presence she feels in the house. Angelique reminds Hannah to only call her Alexis. Quentin comes in and asks Hannah when she arrived. He asks to speak to her alone, and they leave the room together. Angelexis tells Dameon that she feels him near, and that they will meet very soon. 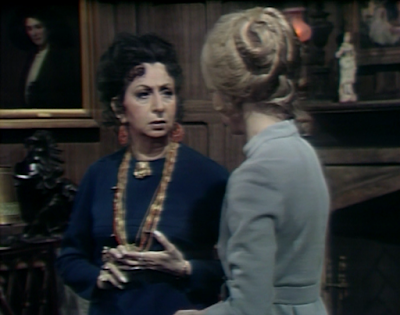 Cyrus tells Gladstone that he needs another delivery of the compound tomorrow. Gladstone asks him if he's still unwilling to discuss his project. He then asks about the difficulty with memory he originally experienced, and Cyrus says it is working quite successfully. 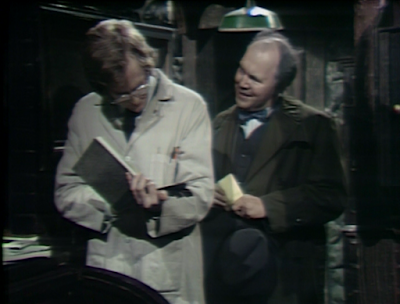 Staring at a brick wall, Gladstone laments the absence of the painting that used to hang there. Cyrus agrees that it's gone, and says he moved it. He escorts Gladstone out and locks the door. He then opens the package with the compound, and prepares another dose. 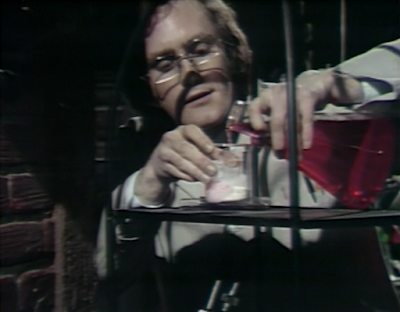 Quentin shows Hannah where Dameon showed him hanging from the rafters. He tells her to summon Dameon's ghost so he can find out what he's trying to tell him. She says she can't help him. Quentin demands that she summon him, and she says she doesn't have the power, but she doesn't need it because he's here, and screams. The lights go out, and Quentin looks around the room for him. 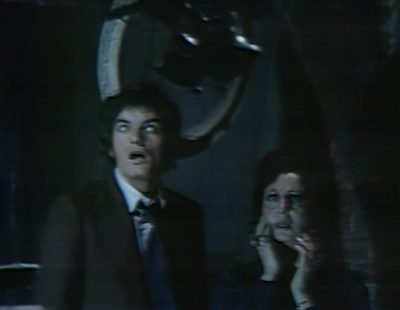 They come back up, and he sees Dameon's ghost. He asks what he's trying to tell him. After an unsuccessful game of charades, Quentin asks how he can understand him. Quentin asks if the prophecy about his death is true, and Dameon disappears. 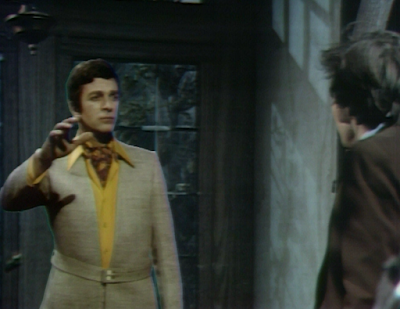 Cyrus visits Alexis to check in after what they did to Angelique's body. Alexis tells him that they did the right thing.

Hannah and Quentin come downstairs. He makes her swear she won't say anything to Alexis. Cyrus and Alexis come out, and she says he's going away for a few days. Alexis and Hannah head upstairs, and Quentin takes Cyrus into the drawing room. He tells him that the spirit of Dameon is back in the house. Cyrus apologizes, explaining he's leaving for work reasons. Quentin then brings up the night Cyrus left abruptly. He says he saw his note, and Amy found an early copy in different handwriting. He asks if he's imagining it. Cyrus says his first note was scribbled illegibly, and Quentin starts to disagree, and then tells him not to worry about it. Cyrus leaves and Quentin pulls out the two notes. 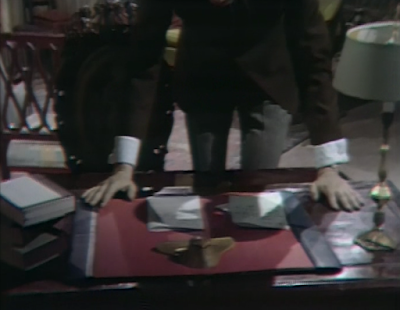 Angelique tells Hannah that Dameon won't be able to tell Quentin the truth. Hannah asks how they'll stop him. Angelique tells her to bring her the Candles of the Seven Secrets. Hannah says she can feel Dameon's presence. Angelique tells Dameon that they will meet face to face at his grave. 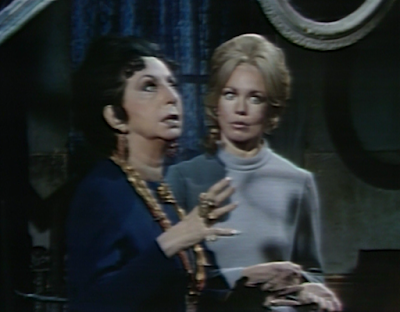 Cyrus debates helping his friends, or becoming John Yaeger... He chooses what's behind door number two and drinks the potion. 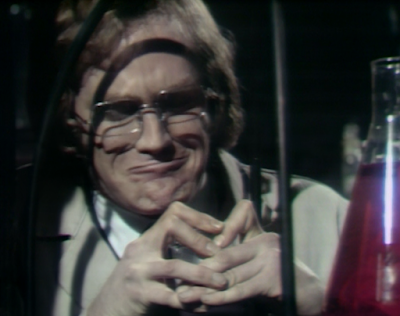 Hannah and Angelique go into the basement of Collinwood. She says they're near the vault.

Yaeger starts out, and runs into Gladstone. He says Cyrus was expecting a delivery, and Yaeger says that was tomorrow.  Gladstone asks what his relationship to Cyrus, and Yaeger says he's his assistant. He asks him to call Sabrina to accept the delivery. Yaeger says he can just take it from him. Gladstone tells Yaeger that if he's threatened, his cooperation will cease. He bids Yaeger goodnight, and leaves with the compound. 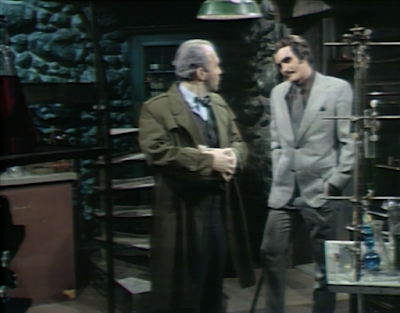 Angelique finds the lever to open the secret vault. Inside is a wide-eyed skeleton! Angelique takes a candelabra and brings it into the vault, but they are blown out. She tells Dameon to watch closely as she lights the candles. As she lights the seventh, he appears before her. 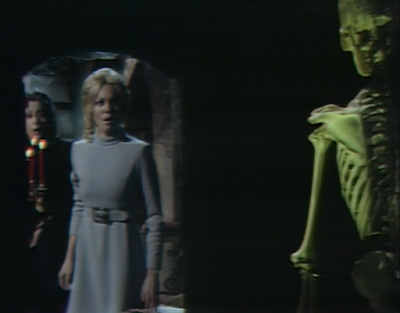 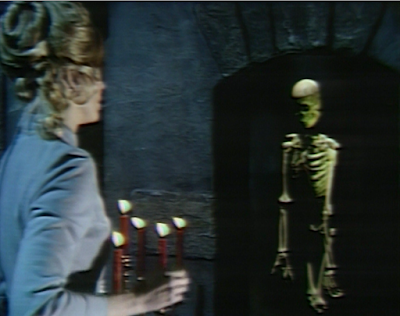 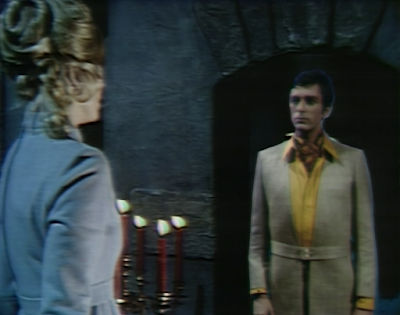 John: If a ghost is alone in a room, does anyone care? I couldn't quite tell if that was our wide-eyed skeleton, or ugly skeleton bride today. But now that Angelique has summoned him, maybe we'll finally learn the truth about him. 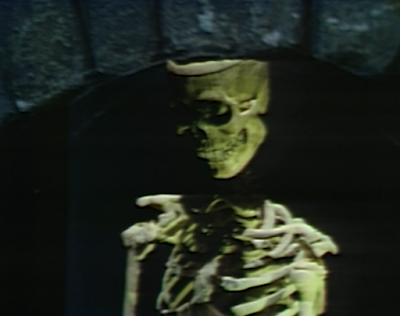 Christine: It looked like a combo skeleton to me! It's a real mystery how Dameon's skeleton is able to remain standing, and it appears that someone did a real number on his clavicles and ribcage! Was that the work of Bruno or someone else? Perhaps we'll find out.

John: Do you think they considered that shooting up at the rafters would also show off the stage lighting? Oops!

Christine: The cameraman must have been immersed in the story and forgot it was being staged.

John: Yaeger don't give a hoot! Rough language for such a tough guy! When he stuttered, I couldn't help but think he caught himself just before letting some profanity slip out!

Christine: That's what it sounded like to me, too. It seems that Cyrus has a Yaeger addiction. What will happen when his dealer, Mr. Gladstone, decides to stop supplying him with his fix? I am surprised that nosy Mr. Gladstone was unable to recognize Cyrus' voice coming out of Yaeger's mouth. 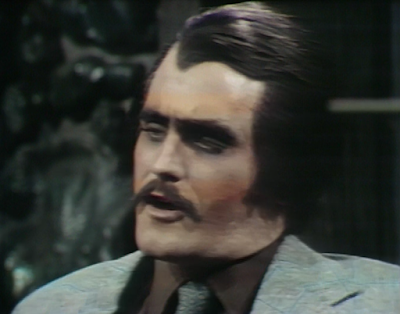 Second Down for the Count:
Barnabas was chained in his coffin 23 episodes ago. 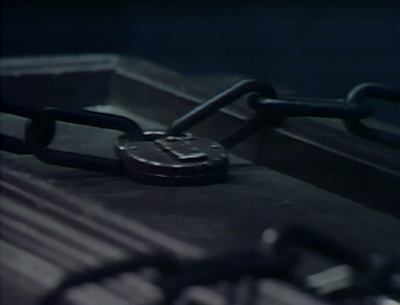