Angelique applies the pin to the Quentin voodoo doll.

In the drawing room, Quentin clutches his chest, and says it's his heart. 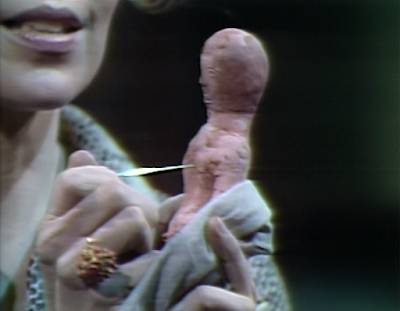 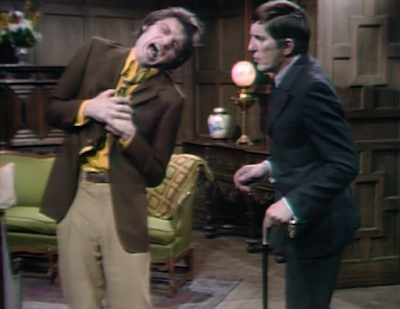 Angelique tells the doll that he must call Maggie back.

Elizabeth calls Cyrus as Angelique comes downstairs. She asks what's wrong, and Elizabeth tells her that it's Quentin. The assemble in the drawing room, and Barnabas asks them to leave the room, as he doesn't need hysterics. Elizabeth asks who gave him the right to take charge. He introduces himself as a distant relative, Barnabas Collins. He escorts her out of the room. Quentin asks Angelexis to take care of Daniel. He says to get Chris, for his will. 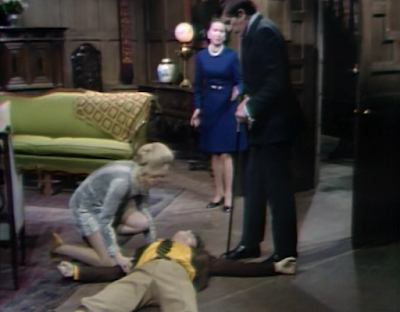 Elizabeth apologizes to Barnabas. She asks what happened. Angelexis comes out and asks where Cyrus is.

Cyrus arrives, and asks if it was sudden. He asks them to wait in the foyer. Cyrus tells Quentin not to talk. Quentin mentions Chris and his will, and Cyrus says he'll decide if they talk about wills or not. 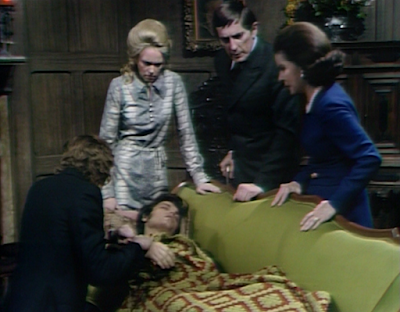 Barnabas, Elizabeth, and Angelexis wait in Roger's office. Angelexis says they should send for Maggie. Cyrus comes in and says that he's afraid Quentin hasn't much time. Barnabas asks if it was a heart attack, and he confirms it was severe one. Elizabeth suggests calling another doctor. Angelexis is shocked by what she's done. She excuses herself. Barnabas tells Elizabeth that she must pray that he live. 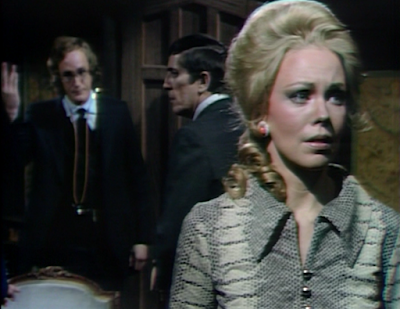 Angelexis returns to the voodoo doll, and tells it that it has failed her. She removes the pin from the doll. 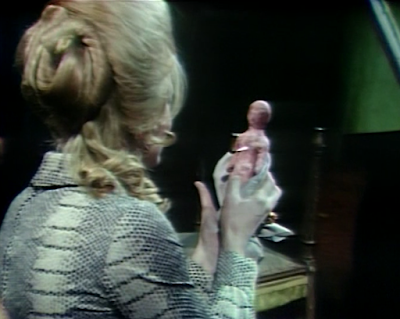 Quentin grimaces in pain. Cyrus gives him an injection as he screams in agony. 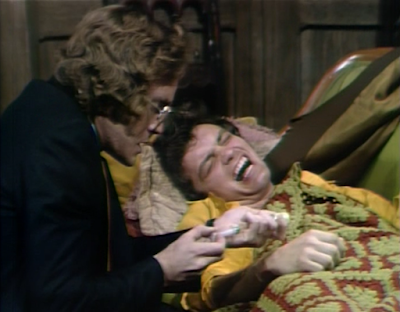 Angelexis rushes past Barnabas and Elizabeth to go in to see Quentin. She tells Cyrus that he will not die. Cyrus tells her that he only has a few moments left. 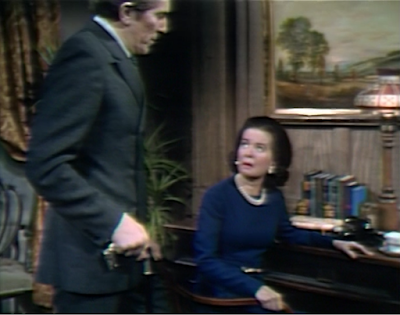 Maggie is writing a letter to Quentin explaining that there's no point continuing this way, but then crumples it up just before her phone rings. Elizabeth tells her that she must come to Collinwood immediately. 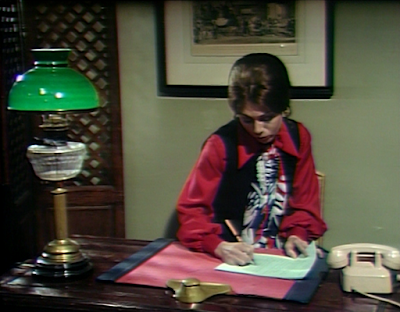 Cyrus says Quentin's pulse has weakened, and Angelexis reminds him that five hours ago he only gave him minutes to live. She kneels over him, describing him as always the strong one. Cyrus says she talks as if she's known him for a very long time. She stops, and says she just feels like she does. 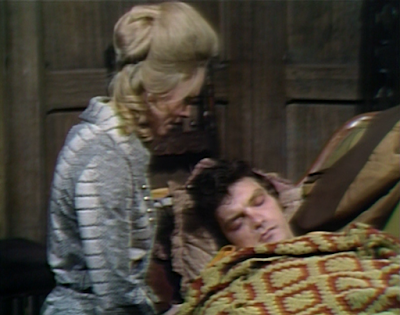 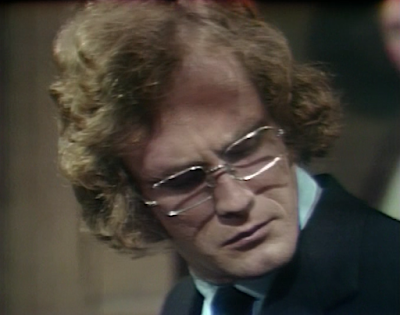 Angelexis comes out of the room and runs past Barnabas and Elizabeth.

Angelique looks at the candles and tells the fire that it has always been her friend. She asks the candles to burn away the pain from Quentin's body, ending what she has done. She extinguishes all of the candles. 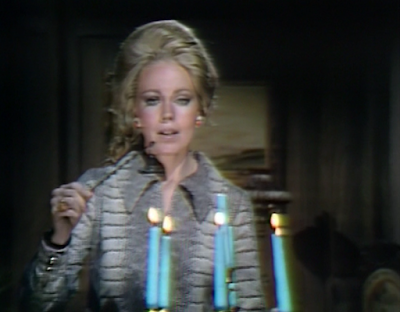 Elizabeth walks in on her and asks what she's doing with all the lights out. She explains that she was sitting in the dark. She asks if there has been a change, and when Elizabeth says there is none, she says she's sure there has been. Elizabeth tells her that Maggie will arrive at any moment. Angelexis feigns happiness. Elizabeth reminds her that she was one of the reasons Maggie left originally, and suggests that she go stay with her Aunt Hannah. Angelexis explains that she can't leave until there's some change. 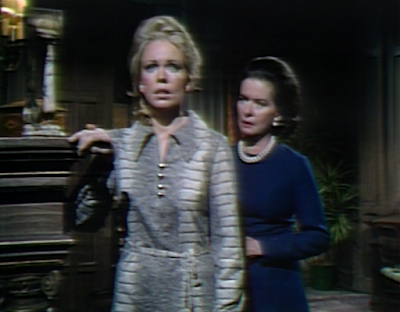 Maggie arrives at Collinwood. Barnabas comes out of the drawing room, and she asks him where Quentin is. She assumes he is the doctor, and he clarifies that he's a distant relative. Elizabeth comes in and embraces her. Maggie says Quentin may not want to see her. Elizabeth goes to see if he's awake. Angelexis expresses her sympathy to Maggie. Elizabeth says Quentin is still asleep, and Maggie asks to sit with him. 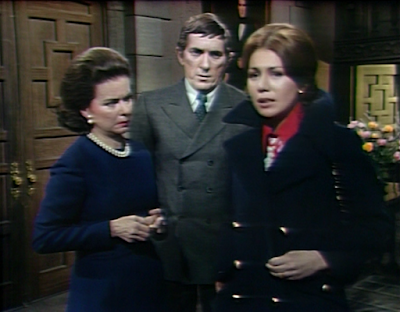 Maggie kisses Quentin's forehead. She says she doesn't want him to wake and see her. Barnabas tells him that Maggie is there, and Quentin, delirious, says she can't stay in the house... that he needs to get her out of the house. He yells for him to get her out. She tells Quentin that she has come to stay. 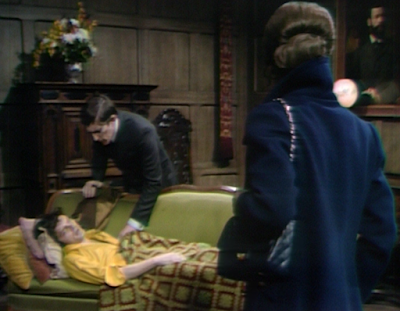 John: When Cyrus said he's afraid it would be a fruitful gesture to call Maggie, since Quentin doesn't have much time to live, I initially wasn't sure if he flubbed the line, or just delivered it poorly, as his delivery doesn't make it sound like a fruitful gesture! Nor should he be afraid to say that!

Christine: I like how Cyrus dismissed the notion that they get a second opinion, since it would probably be no different than his own, and then left Quentin while he was purportedly dying. I wonder why no one considered taking him to the hospital after being told his death was imminent. Maybe if they gave him Maggie's colorful afghan instead of the drab one, he'd recover sooner. It worked for Petofi, after all!

John: Angelique almost gave herself up to Cyrus! You'd think, for someone who knew her so well, he would have clued in to her being Angelique, not Alexis...

Christine: I suspect that John Yaeger knows the truth that Cyrus won't allow himself to admit. I thought Cyrus might consider administering the "Do Not Touch" potion to Quentin. I wonder what effect it might have on him. Maybe he would grow a mustache too.

John: Is Angelique having second thoughts about pushing for Maggie's return? Or was that just because she completely screwed up with the voodoo doll, and it's her fault that he's lying on his deathbed.

Christine: I think she realized how stupid her plan was, and that it should be her and not Maggie to hold his hand while he's dying. It was smart of Julia to take the day off after encouraging her to follow through on such an inane spell. Aunt Hannah is wise to steer clear as well.