Maggie wakes, says it was only a dream, and makes her way into Angelique's room. She approaches the desk from her dream. She finds the button that opens the secret panel and presses it. Inside, she finds a bundle of letters. She opens the bundle and sees that they are Quentin's love letters to Angelique. She opens one and reads it. Of course it says that he'll never want another woman than her. 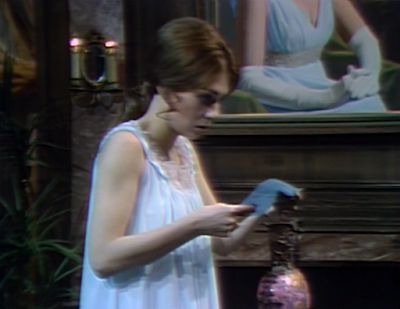 Angelique sits by the fire, saying that Maggie needs to read them all to know the truth. Barnabas walks in on her. He says he heard her talking to someone, and she admits that he caught her. She tells hm that she always loved the fire; she feels a kinship with it. He asks if she was ever afraid of it, and she says no. Barnabas sits by her, and asks about Quentin. She says that he and Maggie have been quarreling. 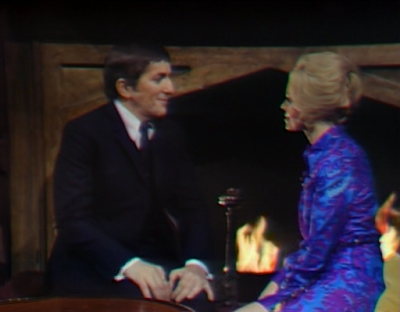 Maggie continues reading letters in which Quentin fawns over Angelique.

Quentin returns home and blabbers on to Angelexis and Barnabas, before finally asking about Maggie. Barnabas suggests that Quentin should reassure Maggie that he is alright. He goes upstairs. 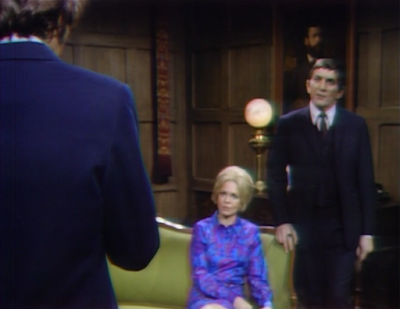 Maggie reads another, in which Quentin says he will never be able to love another woman, even if anything were to happen to her. Quentin surprises her, asking if that interests her... He says he was wrong about her. She's not so innocent. Maggie says they should talk about love, and he sends her to her room. She defies him, saying they need to talk. She explains her dream. He accuses her of having looked through every drawer and Angelique's diary. She says she wants to understand him. He's dismissive, ultimately telling her to get out. 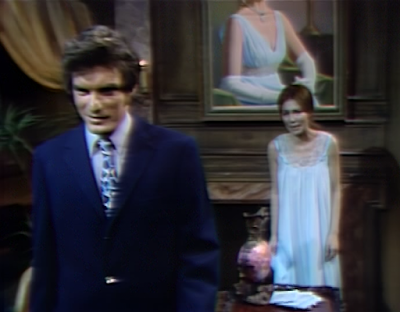 Angelexis and Barnabas play chess. He asks her about her sculpture work, and she explains she left it all in her studio in Italy.  He asks if she's done any gallery shows in New York. Angelexis moves a piece and declares, "check." Elizabeth comes in, bemoaning the costume ball. She asks for Alexis' help. 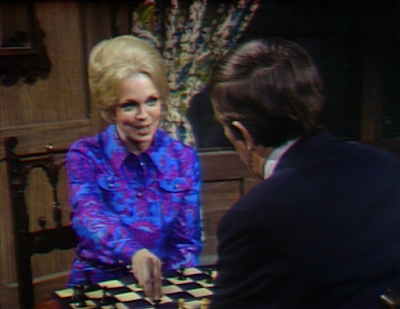 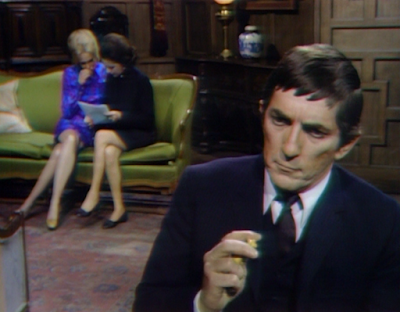 Quentin comes to see Maggie in her room. He says they had better forget about what happened earlier. Maggie suggests that they be more open with each other. She says she knows that it's his  anniversary, and he snaps at her. He storms out and slams the door. 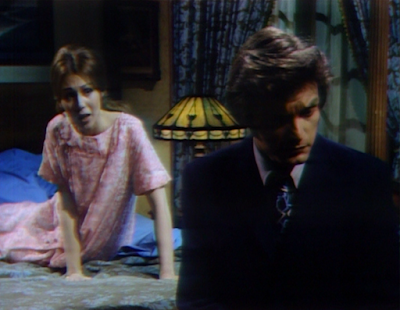 Quentin comes into the drawing room and tells Elizabeth to cancel the costume ball. He walks out, gets in his car, and speeds away. Maggie comes downstairs, and Barnabas confirms that Quentin is gone.

Julia asks Maggie if she's picked out a costume yet, pointing out that there are elegant gowns in the attic. Julia add that Angelique loved the masked ball. They hear Quentin arrive and Julia goes out to greet him. 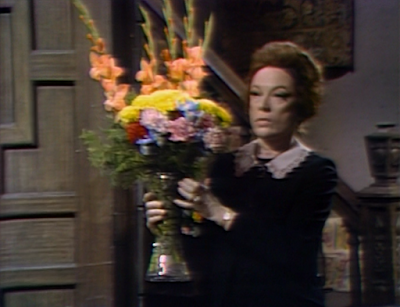 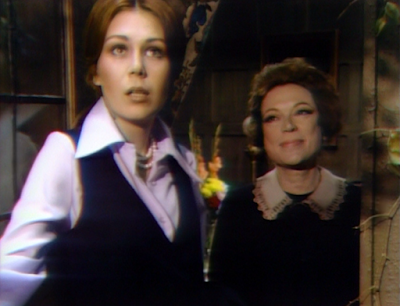 Maggie asks him why he wanted to cancel the party, and he tells her that they are going to try and have a pleasant evening. Elizabeth comes in with alcohol. Quentin says he's going to get dressed. Elizabeth gives her a hard time for not picking her costume yet. 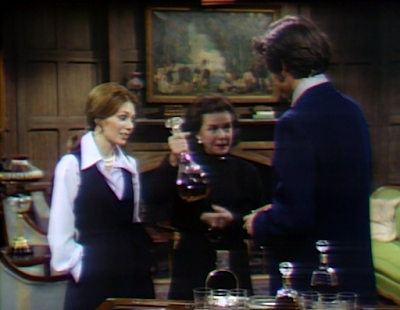 Julia and Angelique discuss last year's party, and how Bruno applauded her dress. Maggie comes in and says the dress she's holding is very pretty. Angelexis tells her to choose a dress for herself. Julia excuses herself. Angelexis tells her she can pick any dress she wants, and Maggie says she'd rather wear her own clothes. Angelexis picks something and tells her to try it. When Maggie says she likes it, Angelexis says it's all wrong. Maggie asks if Alexis had ever been to the costume ball. Angelexis gets her to agree to wear a certain dress—the dress she wore last year. 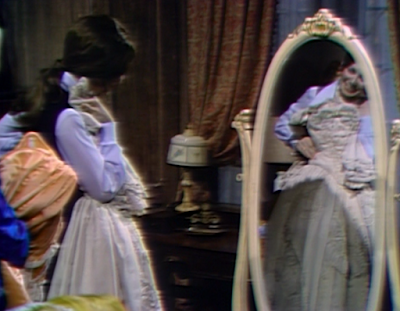 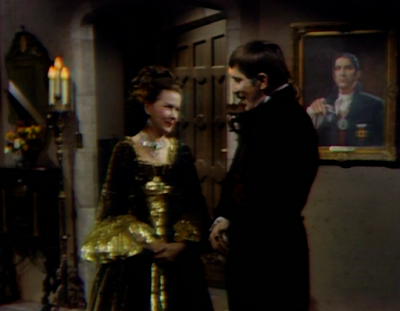 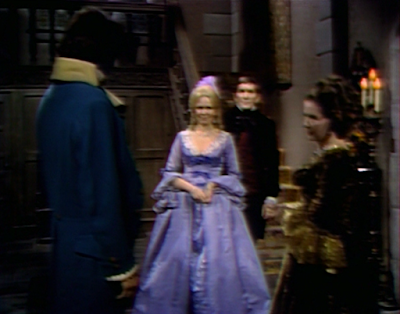 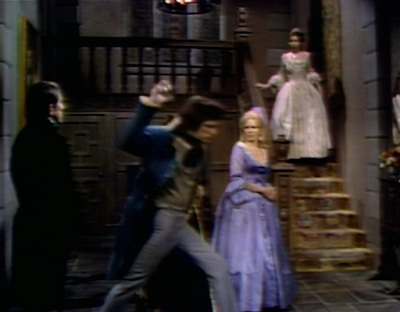 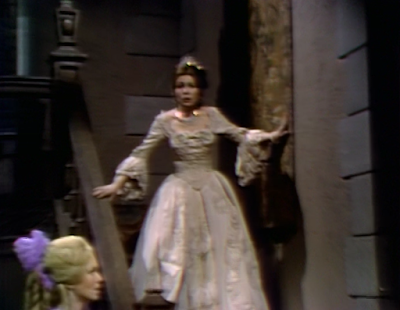 John: Why exactly would someone get worked up over the love letters someone sent to their deceased wife? And such a coincidence that he would have spent so much time talking about how he'd never love another if anything happened to her.

Christine: Considering that Maggie is living in a house where everyone goes on and on about how perfect Angelique was and how she hosted the best parties and all the men loved her and her husband was entirely devoted to her, along with the fact that Quentin shows her more irritation than affection, Hoffman treats her with absolute disdain, Roger is deliberately cruel, and Elizabeth just tolerates her presence might have something to do with her being upset to read about Quentin's singular devotion to his dead wife.

John: I thought it was very interesting for Angelique and Barnabas to play chess in a time band where they surprisingly aren't pitted always against one another. 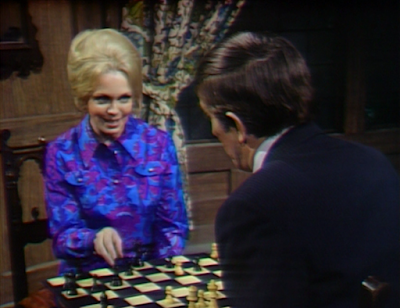 Christine: Is there some underlying meaning we're supposed to grasp about the fact that she had the upper hand in the game? Barnabas was very pensively clutching the pawn she took from him.

John: Is anyone else growing tired of Quentin's tantrums? I was looking forward to meeting 'everybody' at the costume ball, so it was disappointing that only the cast of today's episode showed up—except for Julia... I really thought they'd take better advantage of the existing wardrobe from the show's prior flashbacks.

Christine: I know I'm tired of Quentin being a jackass. It's hard to determine what Maggie loves about him. I was hoping Cyrus might show up to the costume ball and uncontrollably revert to John Yaeger. It also would be a great event to welcome back Bruno, or maybe even to introduce Papa Stokes. Perhaps more exciting guests will arrive for the Friday episode. In the past, when the period clothes came out, time travel was sure to follow. How long before someone takes a trip to the past and who will be tripping this time?
Posted by John Scoleri at 6:00 AM