Angelique kneels by the fireplace in her room. She speaks to Quentin, telling him he's deeply in love with Maggie. 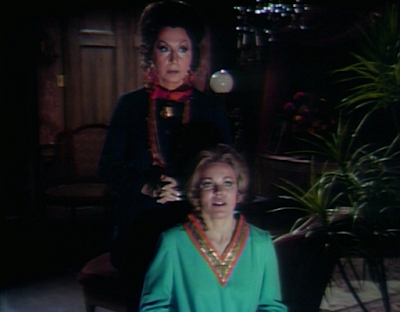 In the drawing room, Quentin receives Angelique's message. She tells him he will bring Maggie back to Collinwood.

After she finishes, Angelique goes downstairs.

Quentin gazes at Maggie's portrait. He appears to be in some sort of stupor. He looks at a letter opener as Angelexis comes in and asks him if he's all right. He says he's not, picks up the letter opener and approaches her in a threatening manner. He turns and takes the letter opener to the portrait of Maggie, slashing it. 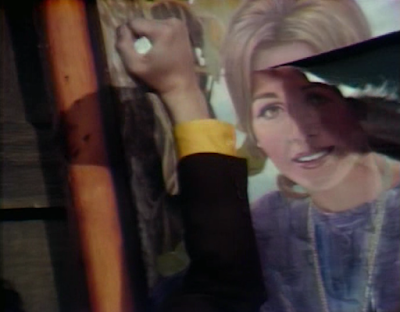 Angelexis asks him why he did it. She tells him he misses Maggie. He laughs, and tells her she just saw how much he misses her. She tries to explain to him how he feels. He says he knows she means well, but tries to leave. She says she thought he was going to kill her with the letter opener, and he owes her some explanation. He asks if it was hate of the portrait, or of Maggie. He says it was as if he was fighting something he couldn't understand. She tells him he can bring Maggie back, because he still has feelings for her. He storms out of the house, and she yells after him that he won't be able to run away forever. 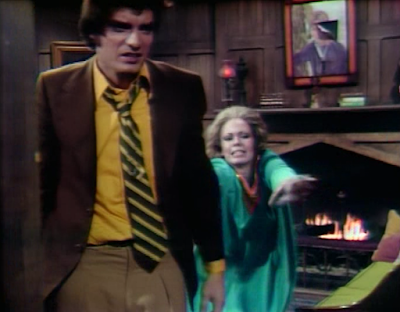 In Cyrus' lab, Quentin asks him if he's losing his mind. Cyrus tells him he's been under a strain lately. Quentin says he was caught off guard meeting Barnabas, and Cyrus asks if he means the man from the empty room. Quentin says he's a descendant, staying with the Loomis'. Cyrus asks if it's strange that no one ever knows what Will is up to. Cyrus stops, and remembers that he was Yaeger when he found the coffin in Will's basement. He asks Quenitn if what Alexis told him is true, that he might feel guilty for acting out against Maggie. Quentin yells that he's not going to send for Maggie. Cyrus tells him that the decision is his to make. Quentin asks how he can ask her back with all the strange things happening in Collinwood. Cyrus tells him he's making excuses, because Maggie loved it in Collinwood. Quentin stops, and starts to have a breakdown. He asks Cyrus why he's acting this way. He says it's a terrible, deep pain. 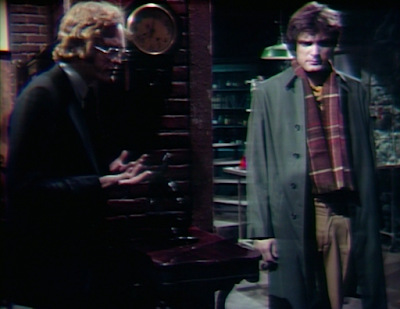 Back in Collinwood, Cyrus asks him to explain what he felt. Angelexis comes downstairs and tells Quentin she was worried about him. Cyrus says he just needs some rest, and sends Quentin upstairs. Angelexis asks Cyrus what happened. Cyrus said it came on suddenly, a yearning for Maggie. Angelexis says it's been building up since the night she left. She asks what they can do about it, and Cyrus says it's Quentin's decision to make. 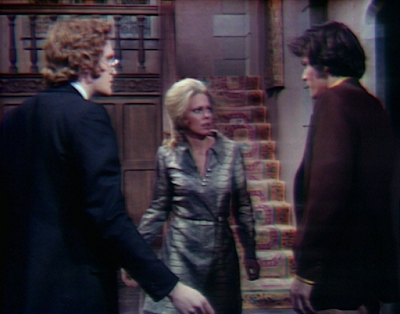 Hannah is putting on a cape when Quentin comes into Alexis' room. She says she must be going, and tells him to please be careful. After she leaves, he picks up a tarot card. He wonders where everything is leading, and if the answer lies in the cards. He deals out seven tarot cards. Flipping over the seventh, he reveals the hanging man. 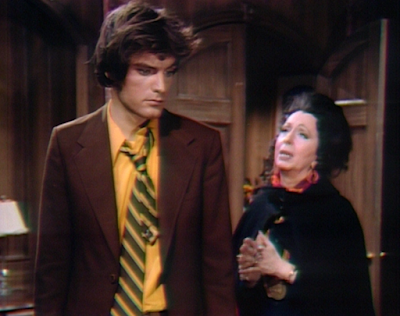 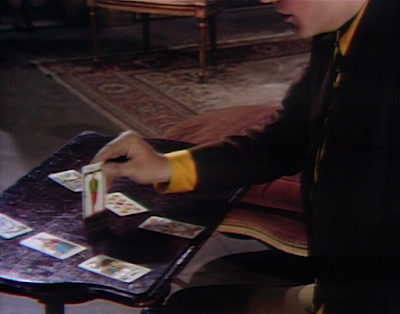 Angelique examines the slashed portrait of Maggie when Hannah comes in. She says they have gone too far, and she must end the spell. Angelique says the spell will end the night Maggie returns and not before. Hannah refuses to have anything more to do with it, and walks out on Angelique. 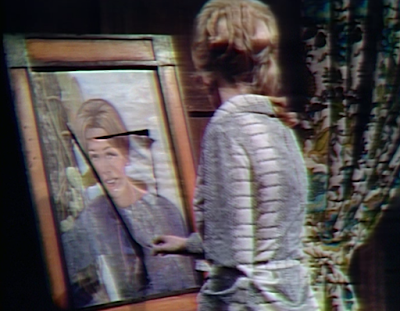 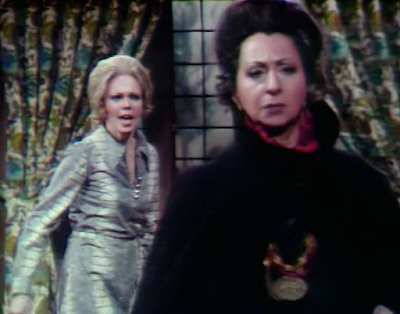 Holding a bottle of his potion, Cyrus thinks that John Yaeger is gone, and must never come back. He decides he must be a doctor again, and never think of the things Yaeger did again. 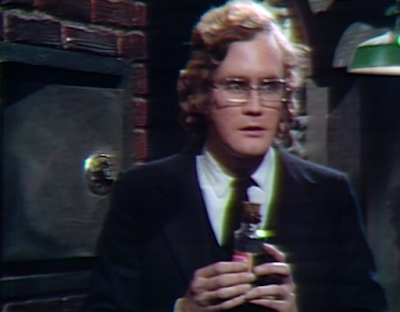 Quentin pours himself another drink. He tries to understand what he's feeling, and what he must do. He looks at the slashed portrait and asks why she's staring at him. He asks what he's done, and says that he's killed Maggie. Blood runs down her face on the slashed portrait. He says he now understands what he must do. He takes out a sheet of paper and begins to write a letter. 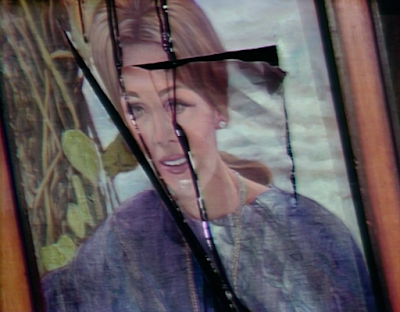 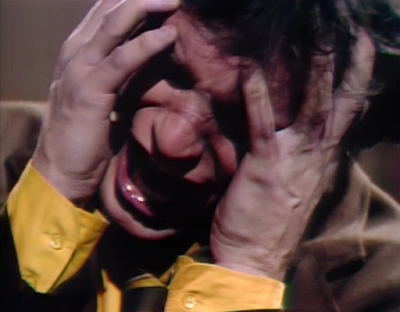 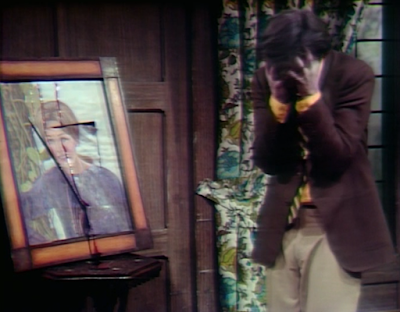 Angelique deals out the tarot cards.

Quentin makes his way upstairs with the letter. It says, "I had to do this to be with the one I love." He realizes that this is what his dream, and the tarot card, were telling him. 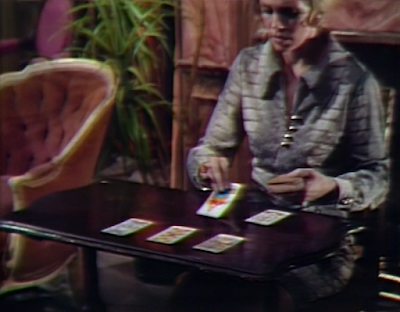 In the attic room, a noose hangs from the rafters above a chair. Quentin steps up on the chair, and prepares to slip the noose around his neck. 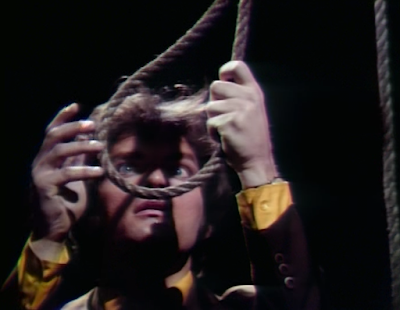 John: You see? Even Quentin agrees that the portrait of Maggie was crap! He felt strongly enough about it that he was able to avoid Angelique's spell and destroy it!

Christine: Perhaps the artist in Paris had a premonition that it would be immediately destroyed upon arrival and didn't see any reason to put any effort into creating a decent portrait.

John: Boy, the directors sure do love that magnifying glass in Cyrus' lab. Not that Quentin needed anything to magnify his insanity in this particular episode... 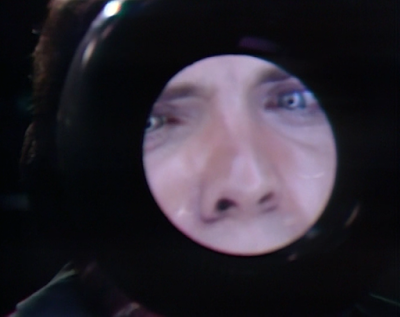 Christine: I especially loved when Quentin asked in anguish, "Why am I acting this way?" Why indeed! 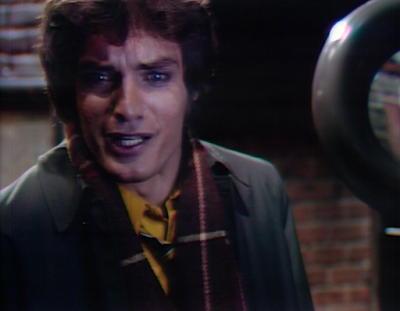 John: We get another Ghost & Mr. Chicken moment via the bleeding portrait of Maggie, though it would have been far more convincing had it been bleeding from where it was slashed as opposed to the top of the frame.

Christine: Yes, much in the same way Quentin's portrait bled after Petofi slashed him in Episode 844. So, not only did Maggie get a shoddy portrait that was immediately destroyed, but she couldn't even get a proper bleed from it! Too bad Quentin knows nothing of tarot or he'd realize that an inverted hanged man is not quite the dire, literal circumstance he's envisioned. I suppose the director inverted it so that Quentin wouldn't have to attempt hanging by his feet! I would have liked to have seen that! 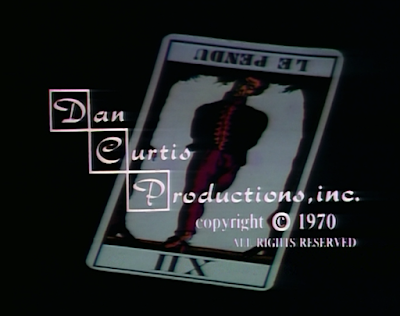 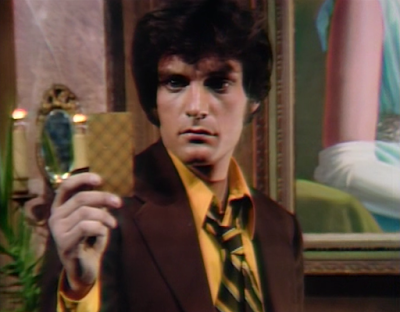