Gladstone comes to see Cyrus at his lab. He points out that Cyrus is always burning the midnight oil. He asks Cyrus about their little secret. Cyrus doesn't understand what he's referring to. He explains that Cyrus led him to the truth that he and John Yaeger are one and the same. He says that Cyrus will deny it, of course. Cyrus asks why he should deny it... something so ridiculous. Gladstone says the compound will allow for restructuring of chromosomes. He doesn't believe Cyrus' denials, and asks where Yaeger is tonight. Gladstone says he has proof. He reminds Cyrus of how the first batch brought with it amnesia. He then specifies the date on which Yaeger first appeared. And then how Cyrus 'left town' while Yaeger was there. He adds the check for damages Yeager caused at the Eagle... and then the painting at Buffie's. 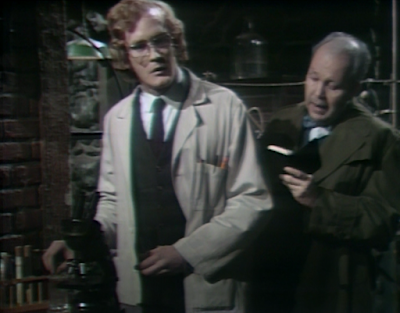 Cyrus says that Yaeger will not like his interfering. He tells Cyrus to let Yaeger know that he's taken precautions, and has written everything down. He adds that he's willing to maintain the illusion. Cyrus realizes that he wants something. Gladstone says he's woefully underpaid, and creating the compound takes more and more time. Cyrus asks how much he wants, and Gladstone tells him ten thousand dollars. He says that without his compound, John Yaeger will never walk the streets again. He reminds Cyrus not to try to silence him. Cyrus suggests that it's not Gladstone's first attempt at blackmail. Gladstone replies there was a reason his number was in Angelique's phone book. He says that she's lived many lives, and each person only gets one. He bids Cyrus goodnight. 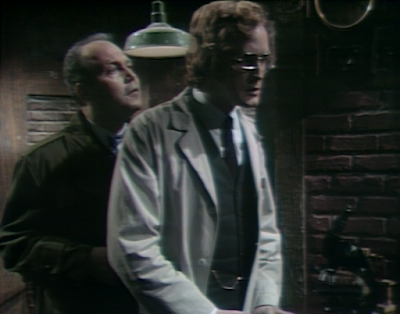 Angelexis brings Quentin to the basement, and tells him Hannah exorcised Dameon's ghost. He wonders why she didn't tell him herself. She asks why he's having so much trouble accepting it. He asks where she found him, and Angelique leads him to the secret door. She says Hannagh sensed it. He sees the skeleton, and says they have to call the police, and tell them Dameon was murdered in the house. She asks how he's going to explain knowing they're Dameon's bones. He points out that he was murdered, and she replies by asking him what he's doing about Angelique's murder. 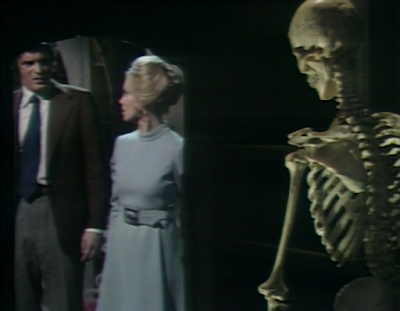 In the drawing room, Elizabeth tells Julia that when the car wasn't at the station to meet her, she assumed she was still away. Julia says she just got back. Elizabeth says Quentin is very inconsiderate. She asks about her vacation, and Julia says she missed the house. Elizabeth asks her to fix her a brandy. 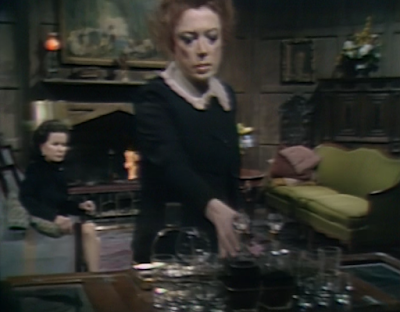 In the foyer, Angelique is on the phone telling Hannah that Quentin wasn't suspicious.

Elizabeth asks Julia to tell Quentin that she'd like to see him.

Angelique tells Hannah that no one will suspect the truth when Julia walks into the foyer. Angelexis asks her what she's staring at. She hangs up on Hannah and tells Julia she missed her. Quentin comes downstairs and welcomes Julia back. She tells him that Elizabeth wants to see him. 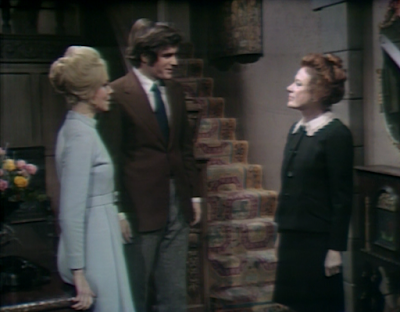 Quentin asks Elizabeth if she enjoyed her stay in New York. She tells him she saw Maggie. He says he's not interested in what she has to say. She says Maggie wants him to come to New York, and recommends that he go if he loves her. He says that she left him. She says that she felt forced, thinking Alexis was Angelique. He asks if she knows Alexis is still in the house. She says that Maggie assumed that, not knowing that Angelique is eavesdropping on their conversation. Quentin says he doesn't want a child for a wife, who runs away and sulks. 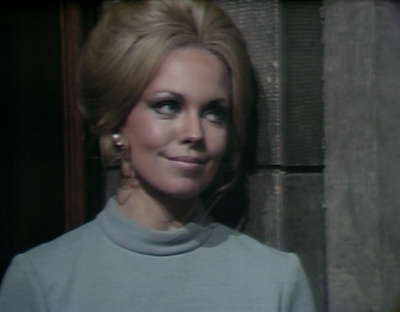 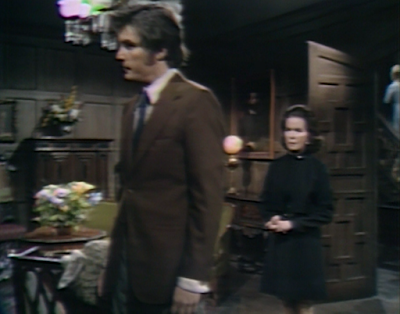 Cyrus does a post-mortem examination of the skeleton, saying that he didn't die from the bullet wound. He says he probably died from loss of blood. Quentin wonders if he should call the police. Dameon was Angelique's friend. He assumes Bruno killed him, but if he says something, it will bring up talk of Angelique. Edwards will still be dead. Cyrus asks about Bruno, and Quentin says he'll take care of him. He asks Cyrus to help him bury the remains. 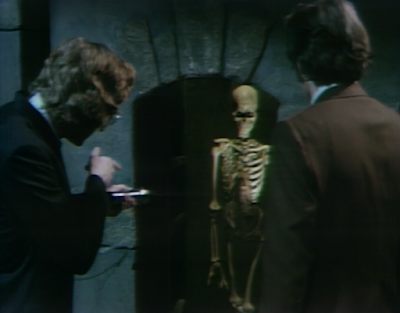 Julia tells the portrait of Angelique that she was sure she would be at the house when she returned. She says she really felt it. As she says she was there to make things ready for her, as she always did when she was away, Angelexis comes in behind her. Julia turns and apologizes to her. Alexis realizes Julia misses her very much. Julia says she was her friend. Angelexis says she needs a friend to help her find out who killed her sister. She says that after Julia left, there was a seance... 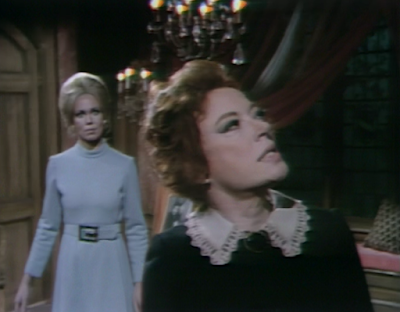 Cyrus and Quentin share a drink in the drawing room after having buried Dameon's remains. Quentin tells him that sometimes he thinks he's losing his mind. He asks Cyrus if he heard of Barnabas Collins. Cyrus says that Will Loomis was writing a book on him. Quentin says he's re-writing the book on him. He wonders why. He adds that Amy went into a trance when she saw Barnabas' portrait. And then he adds Angelique's room being empty, seeing Daniel and Amy talking about Barnabas, and not being able to enter. He says it doesn't make sense. Cyrus suggests that he go away from the house for a while to take a rest. 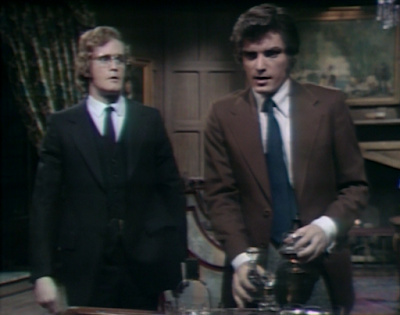 Quentin returns to Angelique's room and when he opens the door, he once again finds the empty room, but this time he sees Elizabeth talking to Julia. She mentions how she didn't believe when Roger told her about parallel time. Julia says she must, and she says that they must close the room since Barnabas disappeared. Julia says it's the only chance of his returning. She adds that if she thought she could join him she would stay forever. She calls to Barnabas asking if he can hear her. She asks if he's standing in the hall in the other band of time, watching and listening to her. Julia wonders if his terrible curse has been discovered. Quentin calls to her, and from behind him, Julia asks what he wants. 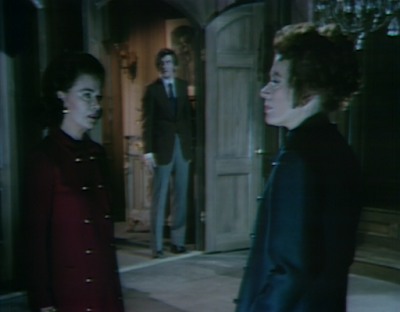 John: It was one thing for Angelique to have seen Dameon's skeleton standing before she made him reappear, but by the time everyone else has paraded by him, including Dr. Longworth (who I was surprised didn't offer an expert opinion that Edwards died due to loss of flesh), wouldn't someone question that?

Christine: Dr. Longworth should have questioned who fused all the bones together so they would not only remain upright, but connected. Dameon Edward's skeleton should rightly be lying in a heap on the floor.

John: I guess Cyrus isn't really on top of the Collins family news, not realizing that Will's book on Barnabas not only had been published, but also appears to have sold out and gone out of print.

Christine: I thought it was interesting that Mr. Gladstone alluded to the fact that he's also blackmailed Angelique. While that doesn't surprise me, I find it difficult to believe that he's lived to tell about it. It could be that he has certain chemical compounds she depends on him delivering as well.

John: What a lucky break for Quentin to open the door on parallel time just in time to get a full explanation of what's going on in the house. Sadly, despite all of (our) Julia's exposition, it's not clear that he understood any of it.

Christine: Still, it is nice to stay in touch with the parallel Collins family, and know that they're trying to locate Barnabas.

Second Down for the Count:
Barnabas was chained in his coffin 25 episodes ago. 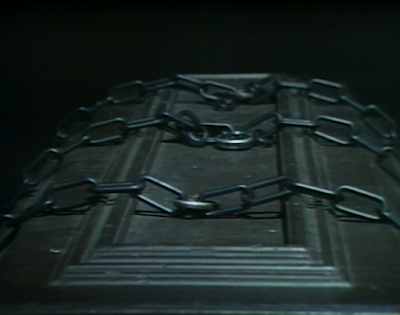