Quentin and Angelexis hold a seance. Quentin calls for Barnabas. They hear weird, outer-space sounds and Julia runs off, breaking the circle. Quentin calls for whoever is there not to leave them. Angelexis tells Quentin to look over his shoulder, where a man stands in the shadows. He says he is Joshua Collins, father of Barnabas. He says they must be warned. He says there is an evil coming to the house. He says they have not seen it yet, but it will appear. Quentin asks how, and he says he does not know what form it will take. He says the evil is living and dead. Angelexis asks how that is possible. Joshua implores him to remember the dead and allow them to rest in peace. He tells him to destroy the evil and restore pride an honor to the house. 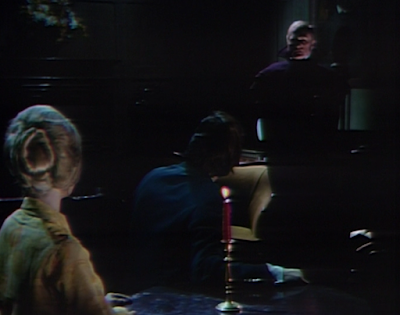 The spirit of Joshua disappears, and Quentin says there must be a connection between the original Barnabas and the events in her room. He says he thinks Will Loomis may hold the key to all this. Why else would he have a need to revisit his book. And why would the portrait of Barnabas have a strange effect on the children? She says he must talk to Will. Roger walks in and asks why the lights are out. Quentin says they were holding a seance. He says they spoke to Joshua Collins, former master of the house. Roger says he knows; adding that Will wrote endlessly about him. They discuss Will's book about Barnabas, which Roger suggests is more effective than sleeping pills. He says Barnabas' life was singularly dull. Quentin suggests there's more to Barnabas' life than any of them know. 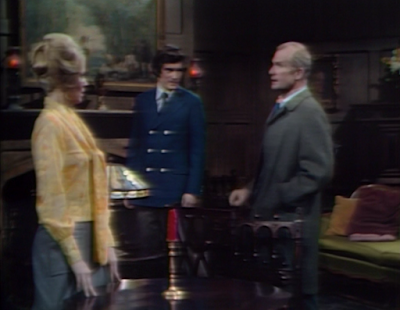 Cyrus is in his lab when Gladstone comes to see him with a new delivery. He says he's brought him a fresh supply of the compound, and asks if he has the ten thousand dollars in case. Cyrus says he doesn't want his compound, and tells him to leave his laboratory and never come back. Gladstone say he hopes he's joking. Cyrus tells him he doesn't have as strong a case as he thinks. John Yaeger has gone away for a while, and there's no way he can prove they're one and the same. Gladstone says he can. He says a small but important part of him remains with him--his signatures. He shows him examples and says that a handwriting expert would confirm they're from the same man. Gladstone says he knows Cyrus enjoys being Yaeger, and can't live without him. Cyrus says he can. Gladstone says he'll extend his patience another 24 hours, at which time his secret will no longer be a secret, and his career will be over. 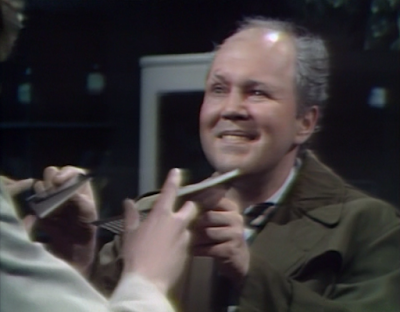 Quentin signs a number of documents for Chase. He picks one up and asks him about it. Chase says it's a new will that Cyrus had him draw up for him. Quentin points out that Cyrus' behavior has been strange since he hired John Yaeger. Chase adds that Yaeger is the lowest possible form of humanity. Quentin asks if Cyrus changing his will has anything to do with Yaeger. The phone rings, and it's for Chase. It's Horace Gladstone. He says he has a document that he thinks Chase will be interested in reading. Chase suggests that he call him at his office, and Gladstone says he'd like to meet in Collinsport about a man named John Yaeger. They agree to meet in front of the Eagle at 10pm. 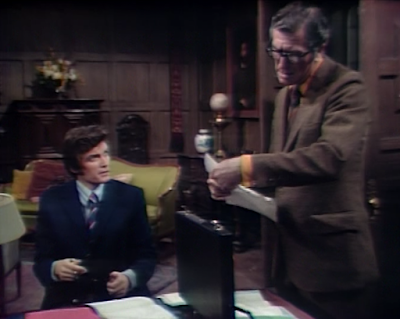 Angelexis is sitting by the fire when she notices Roger in the room. She says he takes it that Roger was quite fond of her sister. He says that is an understatement; he worshiped her. He tells her of the first time he saw her sister. He says that he loved her more than it was possible to love. She says she's relieved to hear how he felt about her. She says one of the reasons she stayed is to find out who murdered her, and she needs someone who loved and understood her to help. He says that he was there, and believes she died of a stroke. 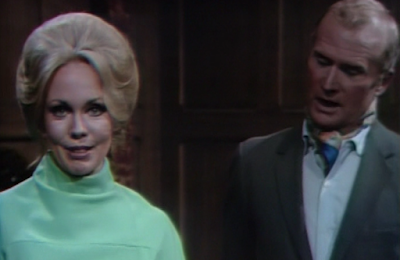 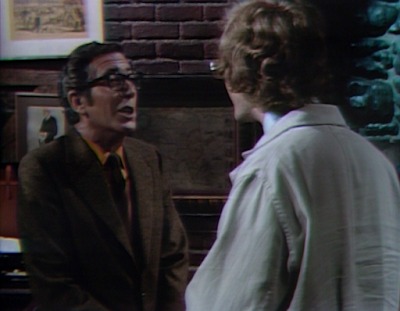 Gladstone is on the docks when Yaeger approaches him. He tells Gladstone he was right—he does like being John Yaeger. He says he's got his payment, and Gladstone says they'll settle that another time, as he's meeting someone. Yaeger explains that he knows. He says he's run out of patience, too. 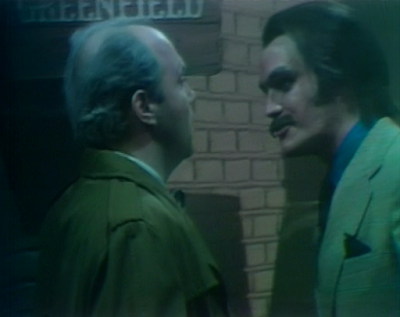 Chase is outside the Eagle when he hears a man call for help. 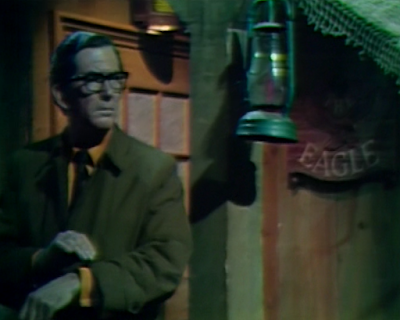 Yaeger knocks Gladstone unconscious with his cane, and then extends the blade. He stabs him as he lies on the dock. 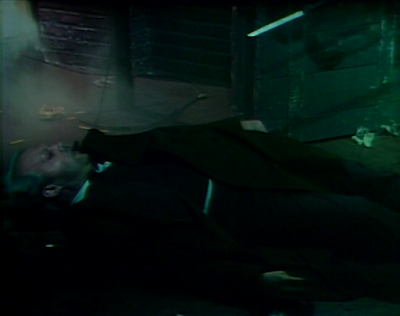 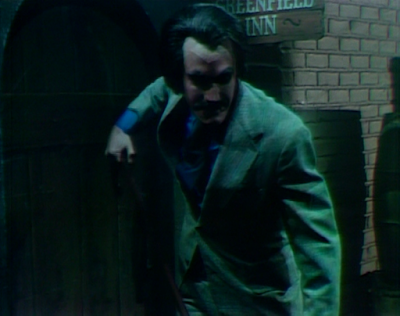 Chase calls out asking what's going on. Yaeger runs away, and Chase sees the body of Gladstone. He sees a man's shadow a few feet away, and calls for him to come out so he can see his face. 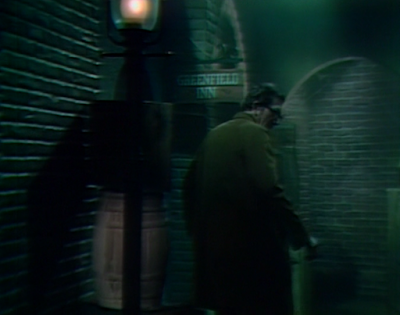 John: Well, that explains why Julia ran off last night, breaking the circle... she had the day off today! The mysterious stranger today was immediately recognizable by his bald head! What's most amusing is that no one bothers to mention to Roger his uncanny resemblance to Joshua Collins...

Christine: He wasn't quite so bald in yesterday's episode. I don't think we ever saw Joshua wear such a flamboyant coat back in 1795. So, is Barnabas the living dead evil thing Joshua is referring to, or is he talking about Angelique? 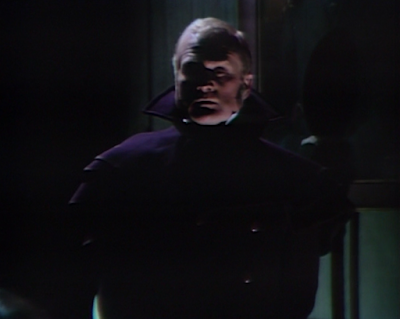 John: Gotta love a lawyer who mixes up confidential documents for different clients. I was initially impressed when he started off by saying he couldn't comment on Cyrus' will, but then he quickly offers up his opinion of John Yaeger. Parallel time lawyers don't appear to be of the same caliber as those 'our' Collins family chooses to employ...

Christine: Mr. Gladstone seems to have quickly evolved to Mr. Madstone. I wonder if Angelique may be responsible for that scar above his eye. 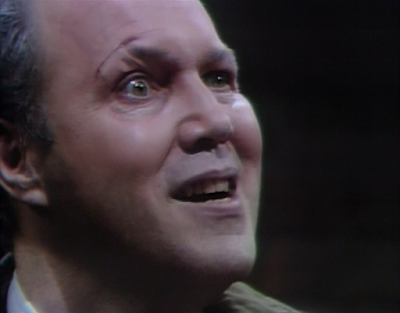 Christine: As well as the end to Gladstone, though it remains to be seen if he received a fatal wound or just another scar above the other eye. How delightful to see that a telephone booth has been added to the set today! 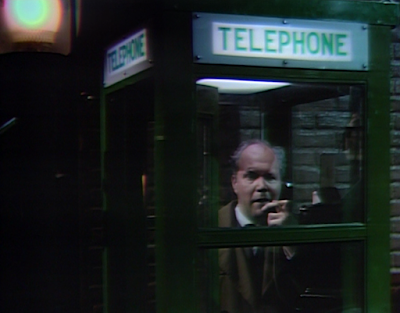 John: Can the two (rather than three) chains on Barnabas' coffin at the end of today's episode suggest that we're that much closer to the return??? 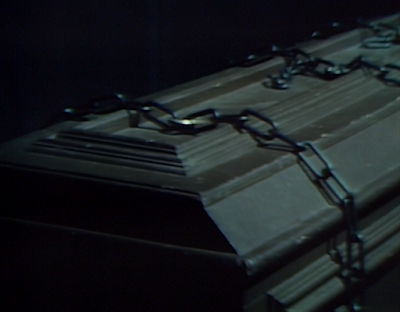 Christine: I think the third chain is just out of shot, but I think it's clear those chains won't hold Barnabas in too much longer. Will we have a Friday disappointment, or will our favorite vampire break free tomorrow?


Second Down for the Count:
Barnabas was chained in his coffin 27 episodes ago.