Maggie is sitting in the drawing room after the party when Roger comes in and asks if she's waiting for Quentin. He tells her that he wouldn't if he were her. He says the party would have been a disaster even if Quentin had stayed. 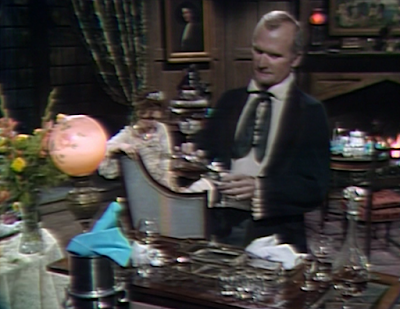 Maggie gets up to leave, and Roger tells her to take off the dress, as it doesn't suit her. He adds that no one can take Angelique's place, but she knows that. He laughs at her as she heads upstairs. 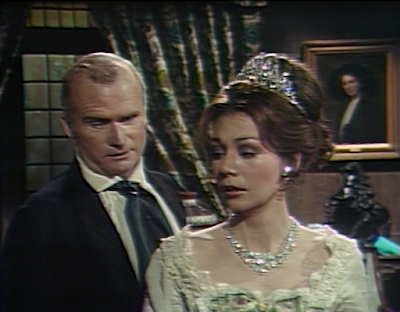 Maggie gets into bed, still wearing Angelique's dress. She looks longingly at a photo of Quentin. She gets up and takes off a tiara. Angelexis comes in, and Maggie tells her that she's changing. Angelexis apologizes for giving her Angelique's dress. Maggie says she had no way of knowing. Maggie points out that Julia knew. Angelexis says she wasn't in the room, so she can't blame her. She assures Maggie that it was an unfortunate accident, and she says she'll tell Quentin that it was her fault. 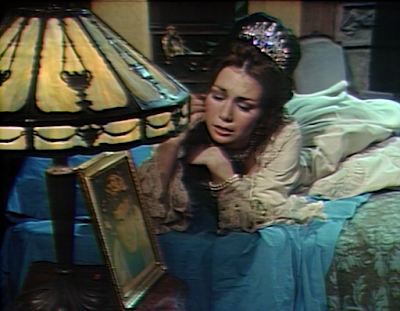 Maggie tells Angelexis that Roger told her that she handled the party poorly, and that Angelique would have done better. Angelexis says there's no reason to talk about Angelique. Maggie wonders where Quentin went in his costume. Angelexis says he's probably down at the beach watching the waves. Maggie says she thinks she's right. She read him say as much in a letter to Angelique. 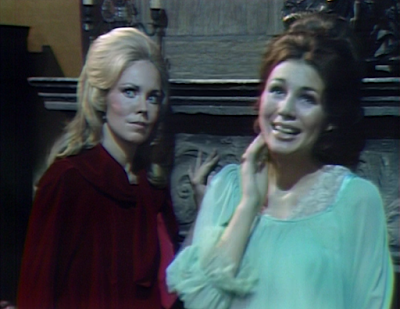 Julia tells Angelique that it's typical Maggie would blame her for the dress. She says she almost feels sorry for her. Angelique tells her not to. She says she's forced to seem like a stranger in her own home. She adds that next year, it will be her party again. They hear footsteps, and Julia says that she thinks Quentin has gone into her old room. 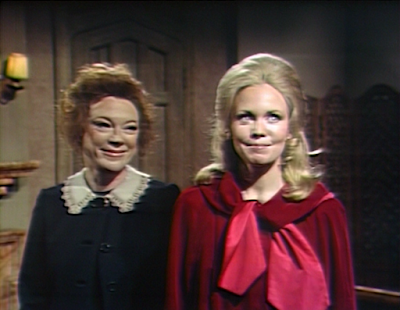 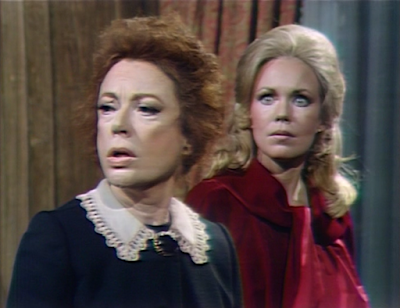 Roger is in Aneglique's room, drinking. He tells her portrait that he feels her presence. He reminisces about last year's party, and how he longed for her to come down the stairs this year. He asks her if her spirit is still there, and if so, what else she is going to do. He turns to see Angelexis watching him. 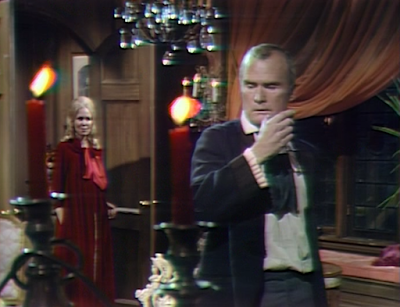 He tells Angelexis that she's the reason he thinks Angelique is in the house. Angelexis asks him to do her a favor—find Quentin. He says if Angelique were here, Quentin never would have left. She says Maggie needs him, and Roger says he doesn't care about her needs. He says Quentin doesn't want her there. He's always comparing her to Angelique. She says he's just going to wait for Quentin to come back, and suggests that she do the same. 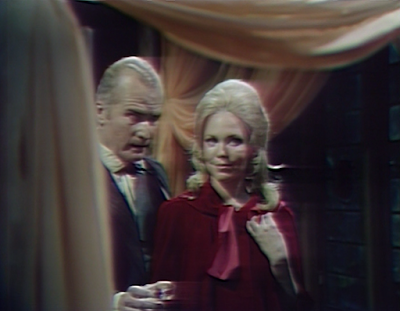 Maggie wonders why Quentin hasn't returned. Roger finds her in the drawing room and tells her that waiting up is bad form for a wife. She tells him he's drunk, and he says he's more perceptive when he is. Maggie runs upstairs as Roger shouts that she doesn't really know Quentin. 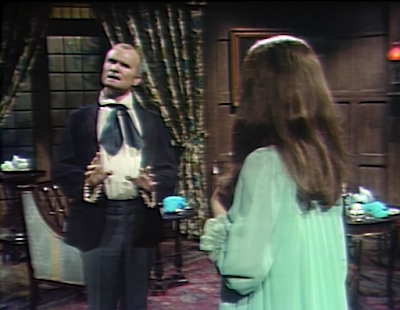 Julia tells Angelique to keep on with her plan, saying it would be a mistake to change course now. She says she'll have nothing to do with it, and Angelique reminds her that she'll do as she's told. Angelique picks up the phone and dials. 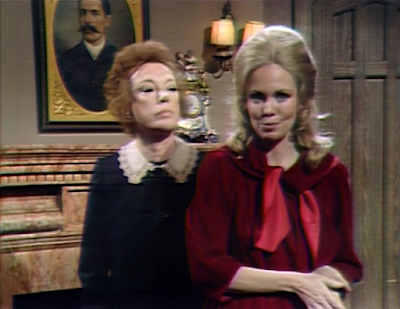 Maggie answers the phone to hear a woman laughing hysterically on the other end. She asks if it's Alexis. She hangs up and decides it was someone from the party. The phone rings again, and when she answers she hears the same laughing. This time, she leaves the phone off the hook. Maggie runs into Alexis' room and finds her in bed, asleep. She wakes, and asks Maggie if she's alright. Maggie say she received a call and it was a woman laughing. Angelexis asks her who it was, and Maggie says it sounded like her. Angelexis says that she and her sister had identical voices. Maggie runs back to her room. 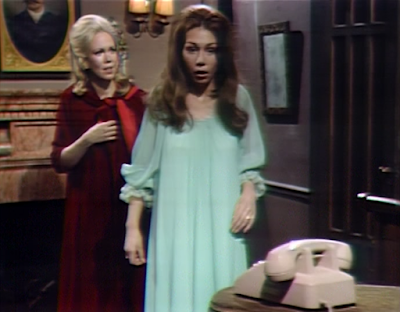 Julia comes downstairs to lock up the house for the night. She turns off the lights downstairs, and when she starts to clean up the drawing room, Roger emerges from the shadows and asks her what the secret is. She says he's imagining things. He says something has happened in the house, and to her. He says he will be included in any secrets. Julia excuses herself. 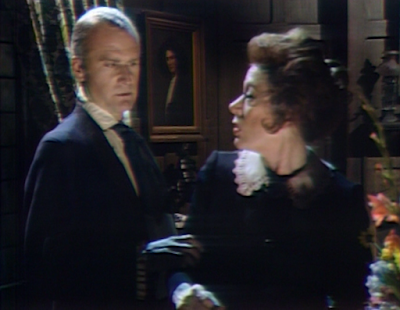 The phone is still off the hook in Maggie's room when she returns. She hangs it up. A door blows open, and she hears music from another room. She follows it to a door. She steps inside Angelique's room, where the piano plays with no one at it. She hears Angelique's voice calling her name. She starts to run, and Angelique says she can't run away from her. Maggie stops and says she'll fight her. Angelique tells her that she has already won. She says no one wants Maggie around, especially Quentin. 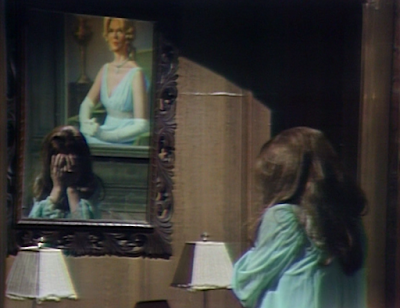 Maggie looks at Angelique's portrait, which dissolves into Alexis face, telling her how Quentin doesn't love her. She tells Maggie to go to the window and jump. Maggie stands on the window ledge, as Angelique's voice tells her to let go. 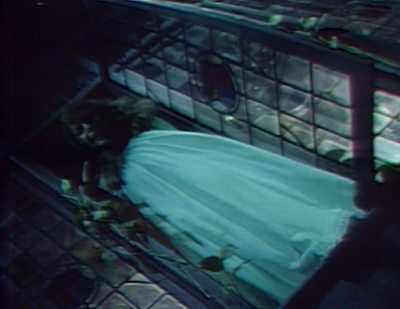 John: Roger is just one more person piling on Maggie! I'm beginning to think that all of the Collins' clan in this time band are jerks! 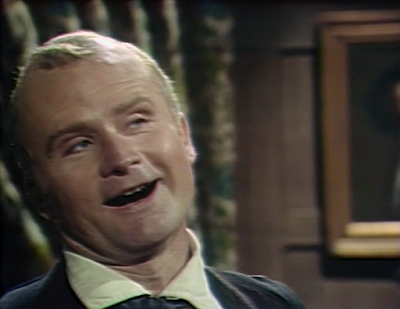 Christine: I'm wondering if the fact that Barnabas escaped vampirism in parallel time had something to do with everyone else becoming so surly and mean. It would appear that Roger did not marry his grandma in this time band. I wonder if Laura Collins is a Phoenix in parallel time.

John: Identical Voice Twins? Come on, Angelexis. Do you think that Maggie is dumb enough to fall for that? I guess she is. Do you think Maggie actually saw Angelexis in the portrait, or was that just for the benefit of us watching at home?

Christine: No, I think Maggie saw her all creepy and superimposed over the portrait just as we did. 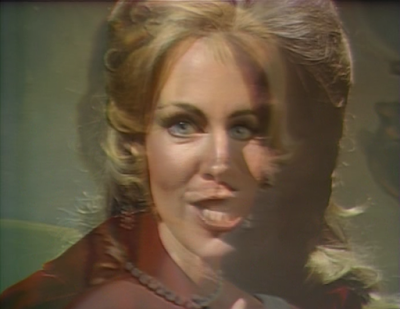 John: I guess in this time band, they didn't deposit discarded Collins' women over Widow's Hill. I'll go ahead and place my bet that Quentin pulls her off the ledge first thing on Monday.

Christine: I don't know if Quentin will be done sulking by Monday. Maggie may need to rescue herself.
Posted by John Scoleri at 6:00 AM