Quentin makes his way upstairs with a letter which says, "I had to do this to be with the one I love." He realizes that this is what his dream, and the tarot card, were telling him.

Angelique continues dealing out the tarot cards. She says the cards will tell her if there's any danger.

In the attic room, a noose hangs from the rafters above a chair. Quentin steps up on the chair, and prepares to slip the noose around his neck. 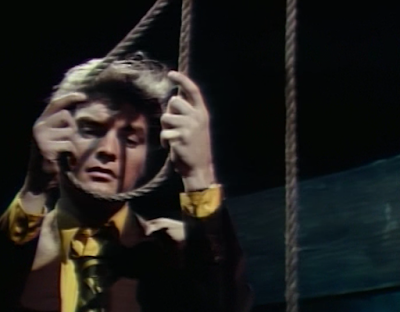 Angelexis  looks to the cards to see if Quentin will send for Maggie. Julia walks in on her, and says they say it's not wise for her to stay there. She sees the tarot cards, and Angelexis says her aunt Hannah left them for her to learn to tell the future, like Angelique, but she doesn't believe it. Julia looks at her suspiciously. Angelexisis is startled by a card of the hanging man, and runs off. Julia looks at the cards. 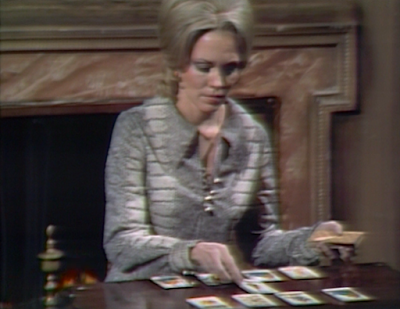 Quentin is about to step off the chair with the noose around his neck when Angelexis rushes in, grabs his legs, and tells him no. 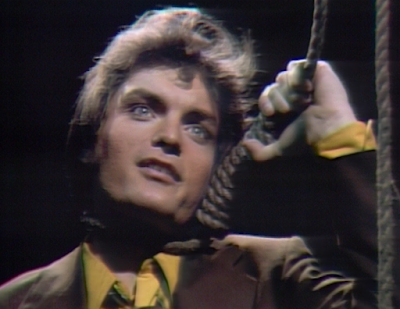 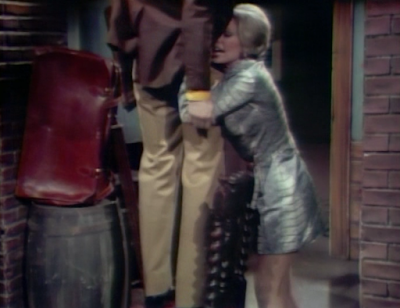 Julia looks at the card of the hanging man, and after looking up at Angelique's portrait, puts it down and leaves the room.

Quentin tells Angelexis that she should have let him do it. Angelexis tells him to call her and he'll find out that Maggie is not dead. He looks at the noose and asks what's happening to him. She says she doesn't know, but it will be solved when Maggie comes back. He asks if he loves Maggie, or if he still loves Angelique. He says it won't help to tell her, and he walks out. She's left wondering why she is unable to control him like all other men. 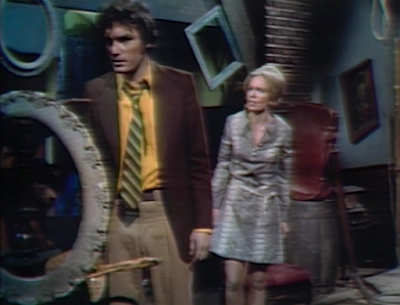 Quentin looks at Maggie's portrait, and wonders why he thought that slashing the portrait would harm Maggie. 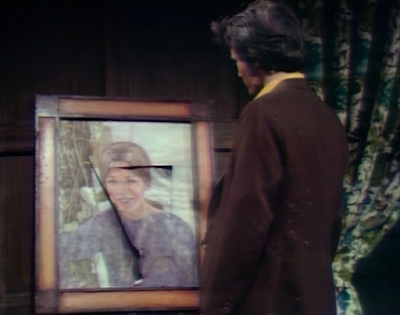 Julia comes in and tells him he'll want to restore it after the accident. He asks how it could be an accident, and she asks who did it. She says she'll have Trask take it to the village for repair, and Quentin tells her to have Trask put it away, because he's tired of looking at it. 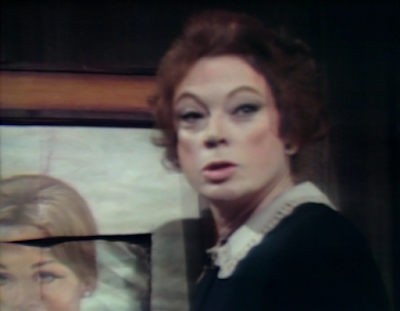 Angelique calls Hannah and confirms the spell didn't work. She hangs up when there's a knock on the door. Julia comes in and says she saw Maggie's picture, and says she's brought something she needs very badly. She holds out a voodoo doll and pin. Angelexis asks her what it is. Julia tells her that it's necessary for Maggie Evans to come back. Angelexis laughs, and says of course she knows. She takes the doll, and tells Julia that she always knew what she wanted. 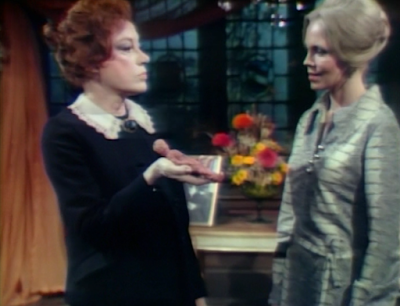 Julia says that perhaps she's afraid of her, now that she's dead. Angelique tells her to touch her. She does. She asks how she came back. She reminds her that she was murdered. She says she felt the pin at the back of her neck, and says they must find out whose hand was responsible. She says she felt the cold of the grave, but a voice assured her that someone would come. She says a higher power allowed her to come back. Julia asks who opened the coffin, and she tells her Quentin and Cyrus. Julia says there will be a debt to be paid, when someone comes to collect. Julia asks if she still wants Quentin, and when she says she does, Julia confirms that Maggie Evans must return to Collinwood. 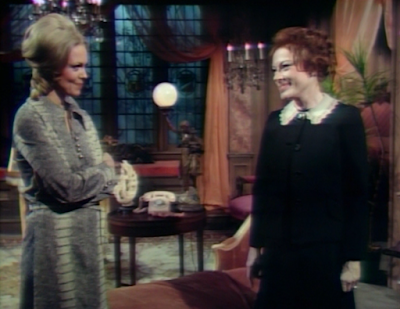 Thinking Alexis has been moved, Barnabas returns to the East wing. He steps inside and sees Julia and Angelexis. Angelexis hides the voodoo doll, and Julia leaves. Barnabas asks her about a character from Will's book, Josette's servant. Angelexis explains that was her distant relative Angelique. Barnabas says he'd like to visit her grave. He asks her if she and her sister are identical twins. She points out that Barnabas tells her that it's not safe in her room, and yet he keeps her in there. She leaves, and Barnabas calls to his Julia. Julia brings Quentin's handkerchief to Angelique to use with the voodoo doll. Angelique asks her to stay with her. Julia notices that she is afraid. She says she has never been able to control Quentin. Julia says she will now. She tells her that Quentin just need be sick enough that they call for Maggie. Angelique fondles the pin. She says if Quentin dies this way, he'll never be able to join her. Julia tells her to begin the incantation. Angelique points out that it was a pin like thus that killed her. Julia says that if she wants Maggie Evans to come so she can get rid of her, she has to do it. Angelique takes the pin and begins the incantation. 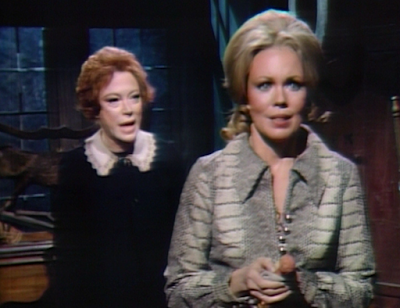 Quentin is slumped over in a chair in the drawing room. Barnabas asks Quentin if he's alright. He swears that there's a curse on the house, and if he wasn't sure that he wasn't the Barnabas the people in the room were talking about, he would think he brought the curse with him. Barnabas asks about Angelique's interest in the occult, and Quentin asks why he's asking that. Quentin clutches his chest, and says it's his heart. Angelique tells the doll that he must call Maggie back. 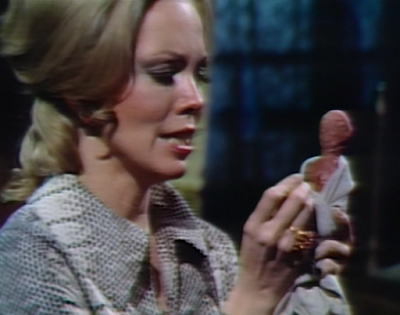 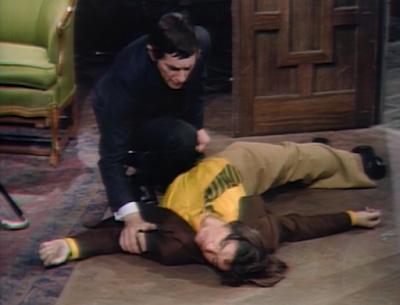 John: So the gig is up. Julia, or Hoffman, as they like to call her in parallel time, finally gets Angelique to come clean and admit who she really is. Pretty soon, more people will know she's Angelique than those who think she's Alexis.

Christine: I love how they were both cackling together. I have to wonder if Angelique didn't confide in her sooner because she may have suspected her in her murder. If she had been killed with a pin to the back of the neck, then surely it had to be someone with knowledge of the occult.

John: Why would Barnabas just barge into Alexis' room without knowing for sure that she wasn't in it? I was pleased that there didn't appear to be any recognition on her face, despite our learning that Angelique of long, long ago supposedly had kids, too. Can you imagine if parallel time's historic Barnabas and Angelique hooked up, and Barnabas is the contemporary Angelique's great great grandfather?

Christine: Wait. What? If parallel Barnabas hooked up with parallel Angelique and had offspring, our original time Barnabas would technically not be any relation. Although we could have guessed Ben Stokes was her great great grandfather, do you think there's a possibility he hooked up with Angelique?

John: Wouldn't it be an interesting turn of events to have Angelique save Quentin from hanging himself only to accidentally kill him with her voodoo doll!

Christine: It's interesting to see Julia press Angelique to enact such a dumb plan to get Quentin rather than help her come up with something better. She may have powers, but she doesn't seem to have the smarts to use them effectively. I would have expected Hoffman to be the brains behind the duo. 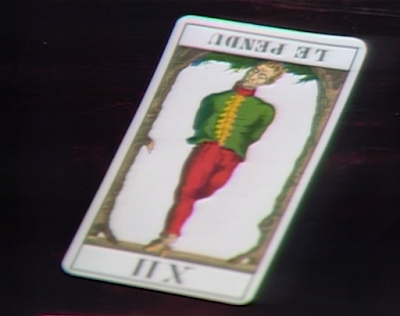