Later that night, as Maggie sleeps, a squeaky bat appears outside her window, and then Barnabas materializes in her room. He leans in to bite her neck. He is interrupted when Julia enters the room, but he's able to revert to bat form outside her window. 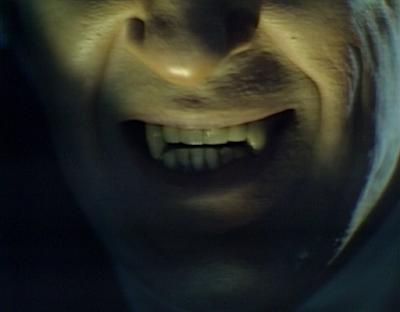 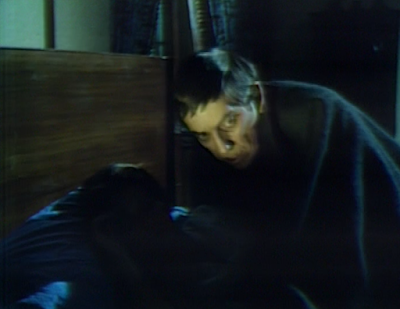 Maggie wakes and asks Julia what she's doing there. Julia says she heard someone moving around, and she thought it might be a prowler, and she's concerned about Maggie's safety. Maggie asks if she won't be safe for one night while her husband is in the hospital. Julia makes reference to strange things that have been happening in Collinwooed. Maggie says she's sure she'll come to no harm, and bids Julia goodnight. Julia leaves, and Maggie gets up and starts to change her clothes. 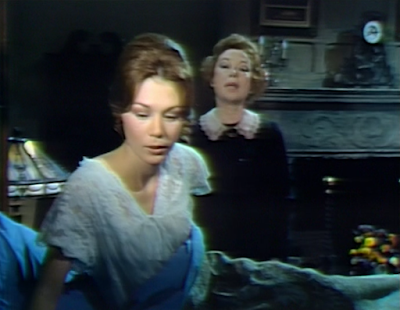 Julia is on the phone with someone, explaining that Maggie was frightened, just as they planned. She assures the caller that she will take care of everything.

Quentin dresses and prepares to leave the hospital when Cyrus comes in. He says the test results are fascinating. He tells Quentin there's nothing wrong with him; he's in perfect physical condition. Quentin reminds him of how he was feeling yesterday. Cyrus explains that it must be something supernatural. Quentin asks what he means; a ghost, an unseen force? Cyrus explains that it wasn't a force or spirit, but black magic or witchcraft. Quentin asks him how the attack occurred. Cyrus explains that a voodoo doll would be the most common way, and describes how a voodoo doll works. Quentin asks if he's saying a real person was responsible, and Cyrus says a real person using supernatural methods. Quentin asks if it could be someone at Collinwood, and Cyrus confirms that it could be anyone. 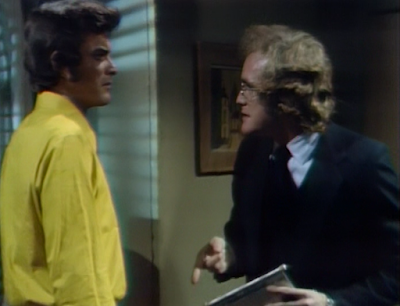 Maggie comes downstairs, dressed. She opens the door and is startled by Barnabas. He asks if she was leaving the house at this hour, and she explains that she wanted to be with her husband at the hospital. The phone rings, and he says it may be for her. She answers it, and it's Quentin. He says he's gotten a clean bill of health, and will be coming home right away. She asks him to hurry and he asks if something's wrong. She tells him she'll talk to him when he gets back. Barnabas asks her for an update, and she says Quentin will be alright. He asks her what's troubling her. He asks to keep her company until Quentin returns, and she tells him that she would appreciate that. They step into the drawing room and he closes the doors. Julia walks up to the door, smiling, and then goes upstairs. 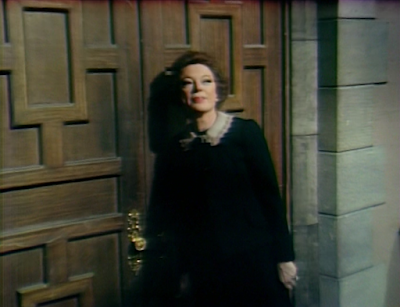 Maggie tells Barnabas that he must be able to read minds. She says she didn't want to wait for Quentin alone, and she's glad she has him to keep her company. He gets right in her face, and says she's known him for such a short time. She says she's probably spent less time in the house than he has, and yet she feels like she knows him the most, second only to Quentin. She explains that she didn't initially feel welcome in the house. She says everyone reminded her of how much he loved the first Mrs. Collins. Barnabas asks if Quentin really loved Josette, and not missing a beat, Maggie repeats her name, and then says Quentin loved Angelique. Maggie says that if everyone else had been as kind to her as he has, she never would have left. 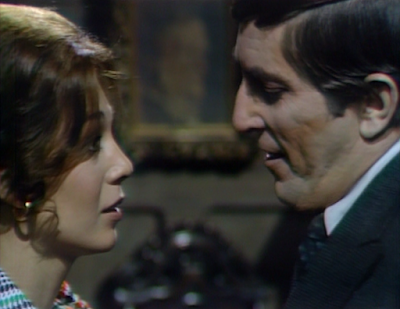 Quentin returns home and finds Maggie and Barnabas in the drawing room. She says that Barnabas was kind enough to stay with her while she waited for him to return. Barnabas bids them goodnight, and leaves. 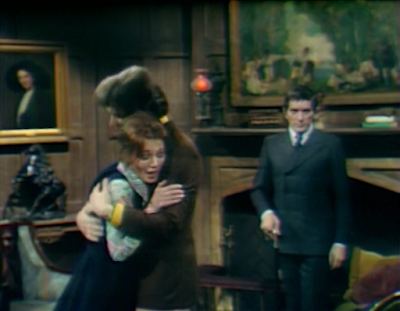 Quentin asks her what's wrong, and she says she wants him to get rid of Julia as soon as possible. Quentin asks why. She explains that she woke up with Julia in her room, saying she heard a prowler, but she doesn't believe it. Quentin tells her to be firm with Julia. He admits that Julia is odd to know, but she's a family fixture. Julia walks in and says she heard her name, asking if he wanted her for something. Maggie tells Julia that she doesn't believe she was in her room because of a prowler. Maggie says that she thinks Julia would stop at nothing to get rid of her. Julia says she thought that time would take care of their personality problem. Maggie calls out her stubborn loyalty to someone who is dead. Quentin tells them both to drop it. He says they'll have a fresh start in the morning. He takes Maggie upstairs, and tells Julia to turn out the lights. 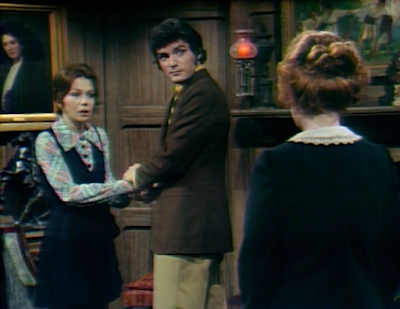 Julia smiles and dials the phone. 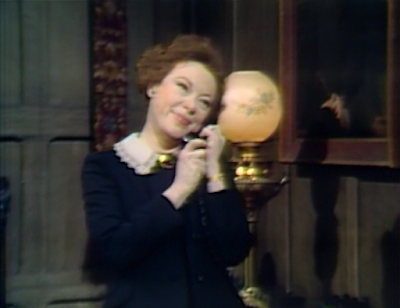 Maggie says she doesn't know why she's so frightened by Julia. He tells her that she's safe with him. She goes to get dressed for bed, and he finds a voodoo doll in her open suitcase. 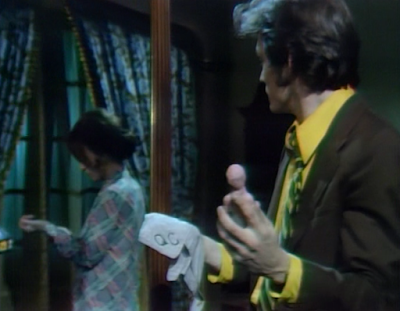 John: Come on, Julia, a prowler? People like Barnabas and Bruno have snuck into the East Wing on regular intervals without getting caught. And other than his bat squeak, Barnabas didn't even make any sound.

Christine: From her phone conversation, I have to believe that she hadn't really heard Barnabas, but that it was just a ploy to enter the room and rattle Maggie's cage by looming over her while she slept. It was only a coincidence that someone actually had been in the room. Who wouldn't be freaked out to wake up with Hoffman lurking in the room? She seems like the kind of creature who will suck your soul out of you! 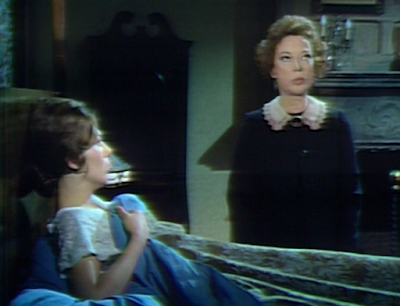 John: Rule number one: never trust a doctor whose first instinct is to assume the supernatural. That said, quite the impressive, spot-on diagnosis from Cyrus. Do you think he's aware that Angelique had a voodoo doll in her collection? 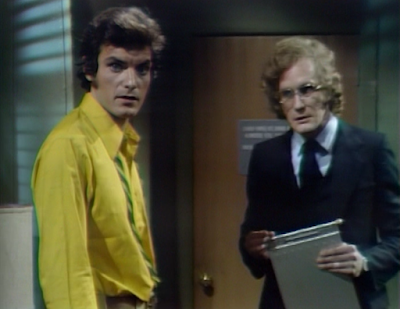 Christine: That was an interesting diagnosis of witchcraft from Dr. Longworth, though I have to wonder why he didn't immediately recognize the supernatural signs in Quentin since he's had prior experience seeing a man die in like fashion in Africa. I also question his statement that anyone at Collinwood could be responsible, when he knows full well that Angelique had an interest in the occult, and he already has reason to suspect Alexis is not who she claims she is. He had to have known Angelique had voodoo dolls, but it remains to be seen if he's playing dumb, or if he really is dumb.

John: Nice save by Maggie when Barnabas made a Freudian slip and referenced Josette instead of Angelique! It is almost funny that in this time band, things truly could have worked out for everyone, with Angelique ending up with Quentin, and Barnabas ending up with Maggie. But sadly for Barnabas, I don't see things playing out that way in parallel time, so he's ultimately going to have to find his way back into our time band...

Christine: Wait. What? You are confusing me again. Barnabas ended up with Josette in this time band, so things did work out for those couples, though it's debatable if things worked out for Carolyn and William H. Loomis. Parallel Quentin is a real numbskull! He'd rather keep his housekeeper than keep his wife happy by saying he can't fire Hoffman for entering Maggie's room uninvited and unannounced in the middle of the night to intimidate her? Now it looks like he suspects that Maggie would be dumb enough to leave voodoo tools out in the open for him to find. Maggie had better keep her suitcase packed and ready to go. 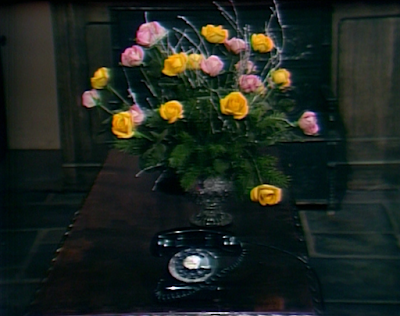