Barnabas and Quentin come downstairs. Barnabas asks him how many times he has witnessed people in the room, and Quentin says four times. He asks Barnabas why it's impossible to enter the room when the strangers are in there, and why he didn't seem as surprised by that. Quentin tells Barnabas that he believes he is the Barnabas those people are talking about. Barnabas assures him that he is not. He asks why he wouldn't just admit it if it were true. Quentin says that they say Barnabas is living under a curse. Barnabas tells him that he'll have to take his word for it. Quentin points out that his arrival at this time is an amazing coincidence. He tells Quentin that since none of them understand what's going on in that room, it might be safer for his sister-in-law to stay somewhere else. 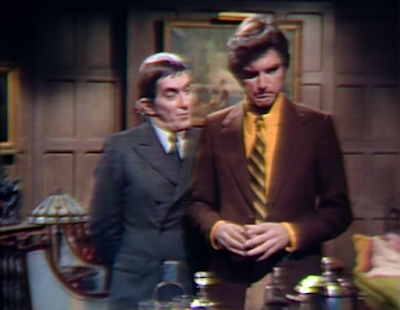 He then asks about Quentin's wife. He tells him that Angelique died six moths ago, and Alexis arrived a month ago. He asks why Barnabas is so interested in her, and he says he finds her very attractive. Angelexis enters and tells Quentin that Trask told her a package arrived for him from Paris. 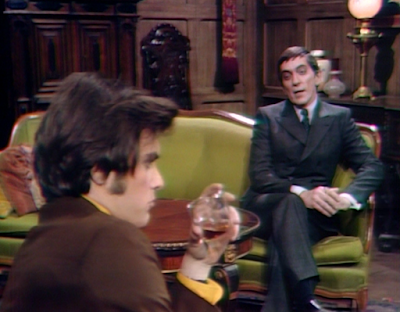 Quentin excuses himself, and Barnabas chats up Angelexis. He asks if she plans to stay in Collinsport, and she says that Quentin has asked her to, and she agreed. He says he couldn't help thinking about her sister's death after seeing her portrait. She asks if he's suggesting Quentin invited her because she reminds him of her sister. She explains that they are very different people. Barnabas bids her goodnight. 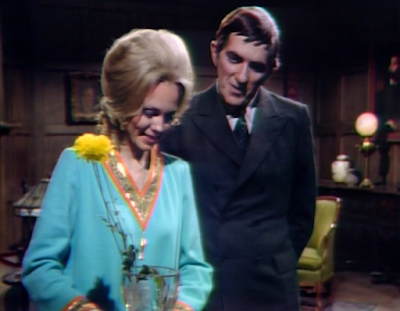 Outside, Barnabas wonders if Alexis is really the Angelique that he knows. He decides he must go back to the room in the East wing, and disappears. 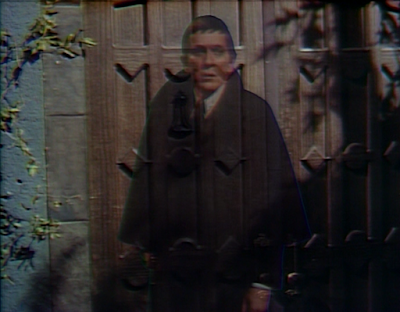 Quentin opens the crate from Paris. Angelexis comes in and asks what he got. He tells her it's a portrait of Maggie that he commissioned. She says she can't wait to see it. He says that he can.  He asks why he should keep it as a constant reminder of her. Angelexis asks him how he feels about Maggie. He takes it out, and Angelexis tells him he should hang it over the fireplace in the drawing room. 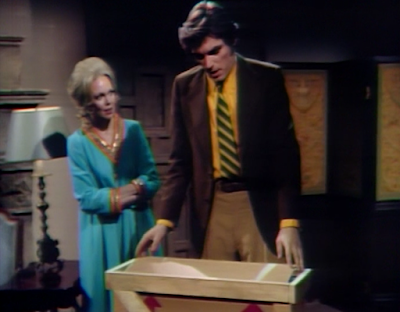 He tells her there's no point discussing Maggie—she's made a point of not coming back. Angelexis tells him that he can take the initiative. She says he can't keep torturing himself, and needs to admit how much he's missing her. He looks at the portrait, and admits that he misses her. She suggests that he call her again, and he tells her that the next move is up to Maggie. He storms out of the room. Angelexis tells the portrait that they will get her back very soon. She picks up the phone to make a call. 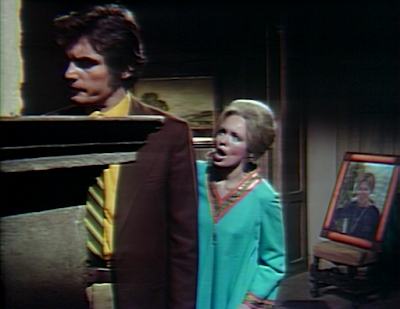 Hannah answers the phone. Angelique tells her to come to Collinwood immediately with all her amulets and herbs.

Angelique brings Hannah to the portrait of Maggie. She asks if Angelique is worried that the second Mrs. Collins is returning. Angelique corrects her, saying that Quentin isn't making an effort to get her back, and she wants her back in Collinwood so she can fight her. She says they need to put a spell on Quentin to get him to call Maggie back. Hannah warns Angelique that she might lose Quentin forever, and she replies that he will be hers again. 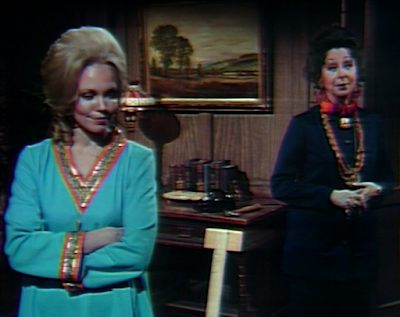 Barnabas stands in the East wing, hoping to return to his own time. Daniel comes in looking for Alexis, and is surprised to find Barnabas in her room. Daniels says he's Barnabas Collins from the portrait. Barnabas says that's his great-great grandfather, and Daniel says he knows who he is. Barnabas asks if he's afraid of him, and he says he is. He says he's going to find his father. Barnabas explains that his father doesn't know he's there. He asks Daniel to look into his eyes and tell him what he sees. He says he sees himself. Barnabas says he will no longer be afraid, and when he leaves the room, he will have forgotten meeting him. Daniel walks out of the room. 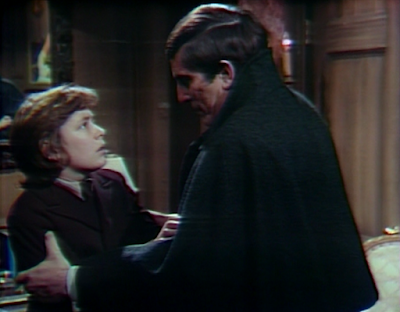 Quentin hangs Maggie's portrait in the drawing room. Angelexis compliments him on it. She fixes him a drink. She pours something into his drink and hands it to him. 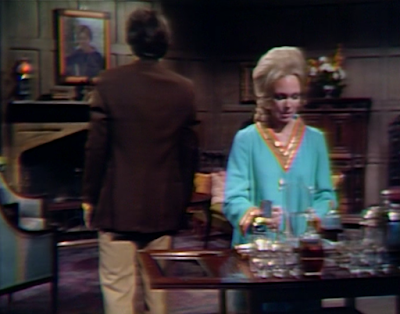 Hannah looks up at Angelique's portrait. Angelique comes in and says she gave Quentin the potion. She turns off the lights in the room, and kneeling by the fireplace, says she's ready to begin the communication. She speaks to Quentin, telling him he's deeply in love with Maggie. 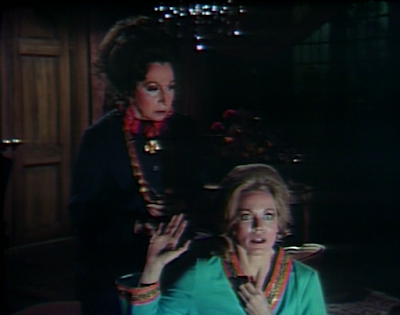 In the drawing room, Quentin receives Angelique's message. She tells him he will bring Maggie back to Collinwood.

After she finishes, Angelique goes downstairs.

Quentin gazes at Maggie's portrait. He appears to be in some sort of stupor. He looks at a letter opener as Angelexis comes in and asks him if he's all right. He says he's not, picks up the letter opener and approaches her in a threatening manner. 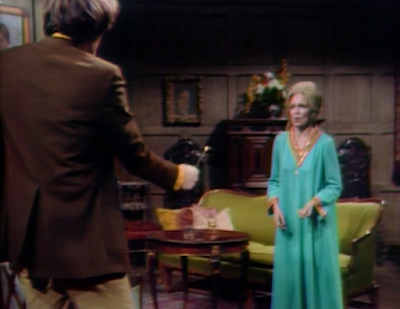 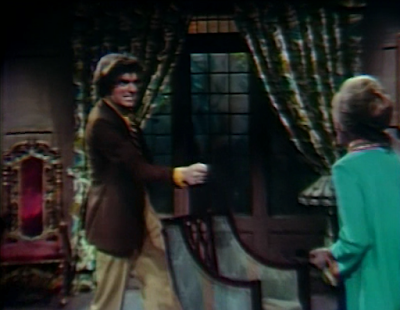 John: What's with Barnabas teleporting from outside to the East wing? When I saw a chroma-key effect was coming, I assumed he was going to turn into a bat and fly in. Don't tell me the fake-bat budget has been cut!

Christine: Barnabas has evolved to where he doesn't need to resort to turning into a bat, but can dematerialize in a more sophisticated fashion. How rude that Quentin didn't offer Barnabas a drink while they conversed in the drawing room today.

John: That was one hideous portrait of Maggie! It almost look like some sort of strange mosaic. Compared to all of the other paintings you've been tracking, this one is a particular low point. 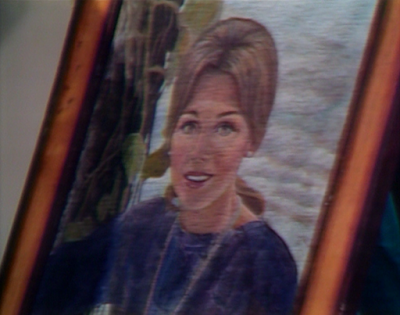 Christine: Well, the portrait effectively captures her beauty, but it appears to have been done with pastels by some sidewalk artist in Paris. While there is a nice symmetry to having her portrait delivered from Paris in the same way Josette's portrait was, she really should have merited the same quality of painting. It may suggest that Quentin was unwilling to spend the same kind of money on Maggie's portrait that he did on Angelique's. Fun fact: the frame used for Maggie's portrait is the same one used for Angelique's portrait in 1795, which she usurped from a Collins ancestor in the drawing room at the Old House in that time period. You can find more information at the Old House Portraits gallery. 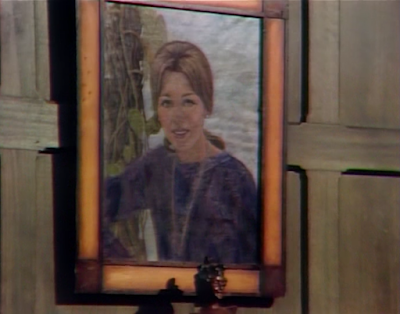 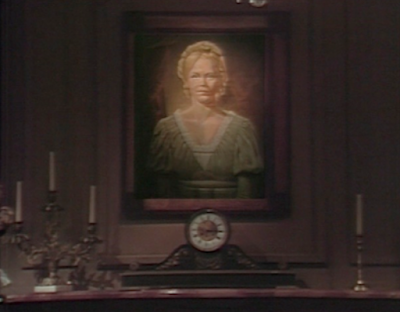 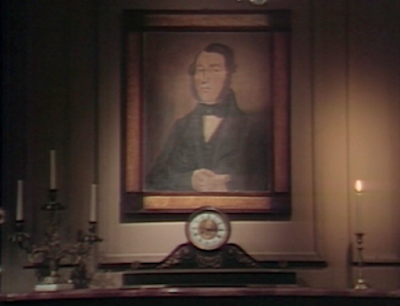 John: I was hoping that Daniel finding Barnabas in Alexis' room would have led to much greater dramatic tension, but Barnabas was able to easily do a vampiric mind-wipe on the boy, who wasn't buying the great-great grandson routine, even for a second.

Christine: Still, at least he put his powers to good use. We don't often get to see him do that. Speaking of powers, it was exciting when Angelique told Hannah to get all her spells, potions, amulets and herbs together for a good spell casting session, only to find out that she intended to put a ridiculous spell on Quentin that was surely going to backfire. Barnabas was wondering if she was the same Angelique from his time. I think her misguided witchcraft proves that she is. 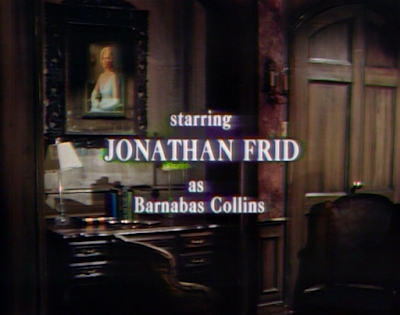