Barnabas tells Quentin that Maggie is there, and Quentin, delirious, says she can't stay in the house... that he needs to get her out of the house. He yells for him to get her out. She tells Quentin that she has come to stay. He says she's not safe there, and she tells him she loves him. She thanks Barnabas for his help, and he excuses himself. Quentin reminds him that he is welcome at Collinwood. 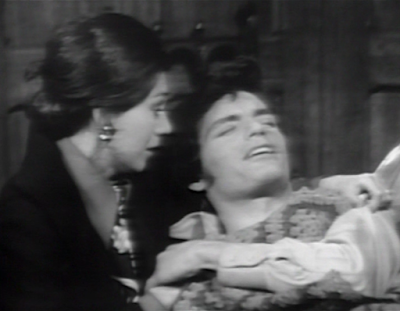 He leaves, and Maggie asks how he feels. He says he'd feel better if he felt she were not in danger. She hugs him. He's shocked to realize that the pain is going away, and says he can really hold her now. She asks him to rest, and he assures her that he is alright. He tells her that they will be together for a long time, and kisses her. Barnabas listens from outside the drawing room, jealous. 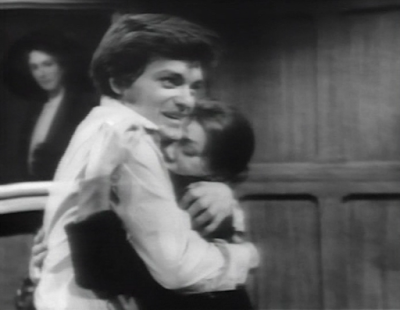 Carolyn tells Will that she's not afraid. She says he can be Barnabas' slave. He tries to stop her, and says that Barnabas is going to try to go back to his own time. She says she's not waiting, and Barnabas appears, saying he strongly suggests that she does. He approaches Carolyn and Will begs her to tell him that he didn't mean it. Barnabas says that she will remain silent. He says that Quentin is sick and his wife has returned, so they have enough to worry about. She says he doesn't care, and Barnabas reminds her that he is his cousin. She says he is a cousin in another time. She tells him to go away and leave them alone. He says he needs to be there in order to return to his own time, and asks to speak to Will alone. As she leaves, he warns her that exposing him would lead to her and Will's destruction. 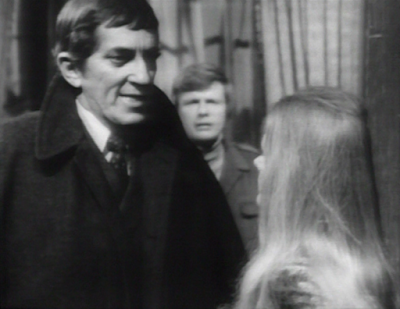 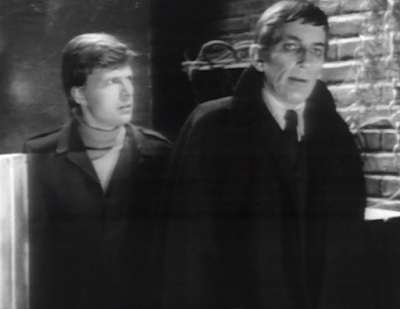 Quentin tries to assure Maggie that he's fine, and she says she promised the doctor she'd bring him to the hospital for tests. They leave together.

Will stands at the ready with his cross. He opens the secret panel and steps inside the room. Barnabas asks if he has the cross, and Will shoves it in his face. Barnabas commands him to put it away, and only use it when necessary. They hear Maggie in the house, calling for Carolyn. 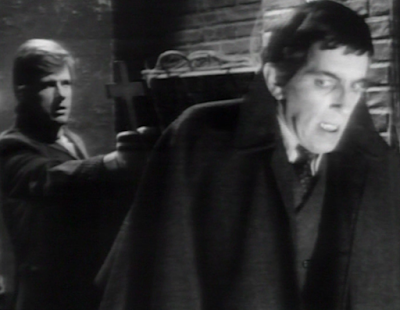 Carolyn comes downstairs and asks about Quentin. She says he's doing well, and she just took him to the hospital for tests.

Barnabas listens through the secret panel as Maggie explains that she wanted Barnabas to know how Quentin was doing. She explains that Barnabas was quite helpful, and seemed like he had known everyone in the family all their lives. Maggie says goodbye and leaves. 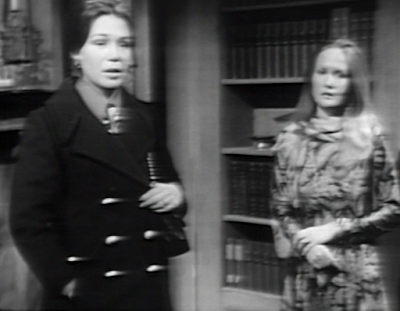 Will asks him if Maggie is the reason he needs to stay in the room, because she reminds him of Josette. He tells Will to let him out, and he uses the cross to keep him in. Carolyn opens the door, and when Will turns, Barnabas bludgeons him with his cane. When Carolyn tends to Will, Barnabas leaves. 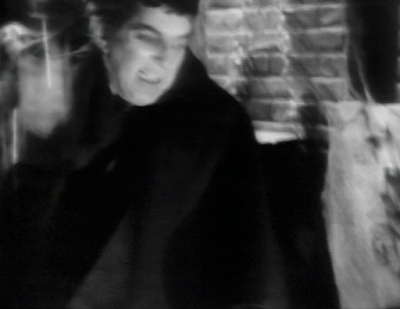 Will tells Carolyn that he needs to warn Maggie about Barnabas. She tells him he can't go, and that she will. He tells her to be careful. 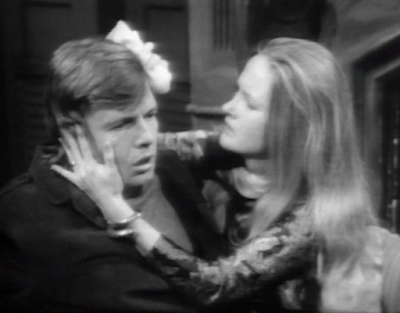 Barnabas is in the woods when he hears footsteps approaching.

Carolyn arrives at Collinwood, and Barnabas asks her if it's late for social calls. She says she wants to ask Maggie more about Quentin. He suggests that she wanted to tell her about Barnabas. Maggie asks who's outside, and Barnabas scurries away. 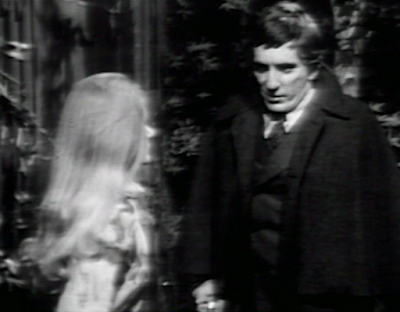 She opens the door, and Carolyn apologizes for not asking if she or Will could do anything for her. Carolyn also asks if it would be better for her to wait at the hospital, and she explains that he wanted her to go home. 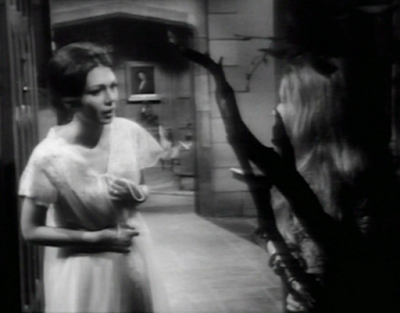 Later that night, as Maggie sleeps, a bat squeaks outside her window, and then Barnabas materializes in her room. He leans in to bite her neck. 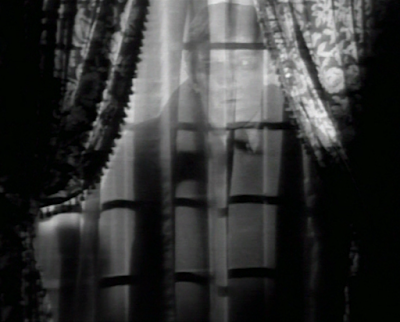 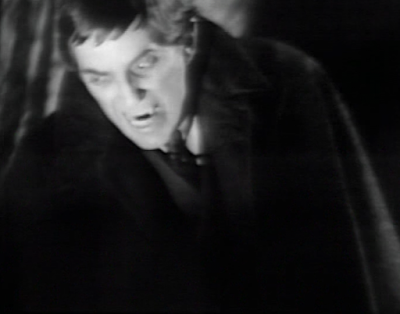 John: Do you think they forgot that voodoo wounds are binary? You're either writhing in agony or perfectly fine. Odd that Quentin seemed to have lingering pain well after Angelique had removed the pin from the doll... until he didn't.

Christine: I thought it might have to do with the fact that she used the poppet while he was still under her first wayward spell, and the double dose may have caused the lingering effects. While removing the pin stopped him from dying, he seemed to improve once he got his hands on Maggie, which was the intent of the initial spell.

John: If Barnabas has absolute control of Will even when he's wielding the cross, how exactly was his plan for Will to keep him in the secret room going to be accomplished?

Christine: We knew that was going to be a dumb plan from the moment he said he would give him power over him just for the one night. Yeah, right! Barnabas has clearly become confused in parallel time to believe that parallel Quentin is still his cousin and Maggie is still his Josette. No, Barnabas, they are not. Just as Julia in this time is not his BFF, nor is Angelique his nemesis...yet.

John: So today, Barnabas turns into a bat, and from his bat-form, transports himself into Maggie's room. I guess he needed the frequent flier miles?

Christine: Barnabas seems to have reverted back to the ruthless vampire we first met, and the squeaky bat is part of that old persona. We got a flashback to Episode 230 with the caning of Will, which also recalls his relentless pursuit of Maggie during that same time period. Perhaps parallel time has caused him to regress, or DC is attempting to recapture the lost magic from the early days. It's not clear why Barnabas would suddenly decide to get his vampire groove on, though maybe it has something to do with feeding on Will and Carolyn in both time periods.

Barnabas, buddy, you need to get this through your thick skull: Maggie isn't that into you! She wasn't interested in the 1960s or the 1970s, the 1790s, she wasn't interested in 1897, and (spoiler alert) she won't be in 1840, in this time, or in parallel time. Let it go already. You don't need Angelique or Nicholas Blair or Laura Collins or anyone else to do anything, you are truly your own worst enemy.