Carolyn screams. Julia enters and asks her what happened. Carolyn tells her that she knows who murdered Angelique. Julia asks who it was. Carolyn tells her not to ask. Julia says she must know. Carolyn tries to leave the room. She tells Julia that she was wrong, and she doesn't know why she said it. She says it was just a dream, and didn't mean anything. Julia says that sometimes they do, and asks her again. Carolyn says she doesn't want to discuss it and runs upstairs. 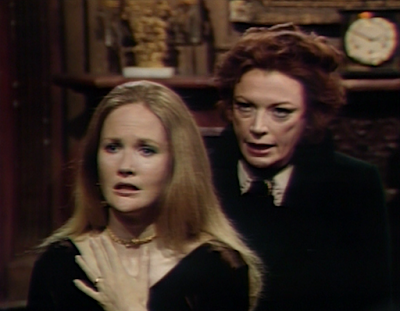 Barnabas arrives at the old house, and Julia asks him if Carolyn loves her husband. She says she said she knows who Angelique's murderer is, but she won't say, obviously protecting someone. Julia assumes it's Will. Barnabas calls to Will, and tells Julia that he has powers over him and will find out the truth. Will comes upstairs, and Barnabas sends Julia to get Carolyn. Barnabas asks Will if he ever considered writing a murder mystery, and Will says he doesn't have that kind of mind. Barnabas asks Will if he hated Angelique, suggesting she flirted with him before running back to Quentin. Will says he liked looking at her too much to kill her. Barnabas realizes that Will can't lie to him, and sends him away. 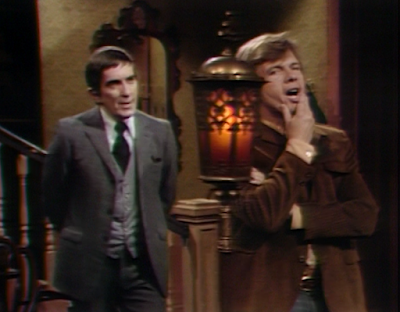 Carolyn comes downstairs as Will leaves. Barnabas says he wants to hear about her dream, and she says it's none of his business. He asks her who she thinks murdered Angelique, and demands that she look into his eyes. She does, and he asks if she's going to force him to use his powers. He demands to know, and she says it was her mother. 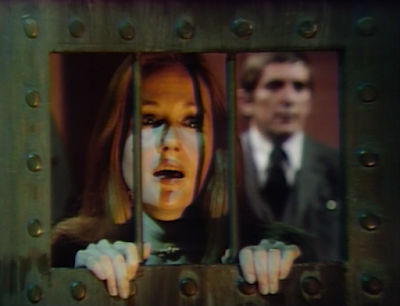 Barnabas finds it difficult to believe, and has Carolyn sit down and explain herself. Carolyn says she remembered kneeling by the body. She says she picked up a piece of jade as she stood up, and realized it was a piece of her mother's hatpin. She says she didn't know at the time that Angelique was killed with a hatpin. Barnabas asks her why she thinks her mother did it, and Carolyn says that she hated Angelique. Barnabas says that someone could have taken the hatpin from Elizabeth. Unless there's something else Carolyn hasn't told him. She says that Angelique was running Will's life, and she had told her mother that she was leaving Will. She doesn't want to believe that her mother would have killed Angelique because of that. Carolyn tells him that she'll deny ever saying her mother is responsible. If anything, she says it's her fault. 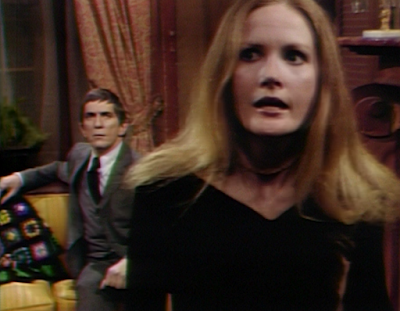 Elizabeth is playing solitaire while Will reads. She asks if he heard a knock. She then asks if he has seen Maggie, and adds that Maggie thinks Quentin is in the house. Will says he doubts that. He asks her if that's why she's so jumpy. Elizabeth says Alexis says he's gone mad, and Will suggests that she not put too much faith in Angelique. She asks if she can stay at the old house with them, and he tells her that they have their hands full with Barnabas. 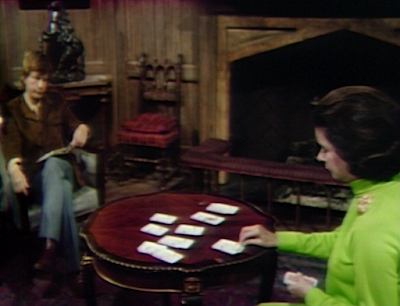 Barnabas reviews those present at the seance who have died: Cyrus, Sabrina and Bruno. Julia doesn't think there's a connection between Sabrina and Bruno. She says that Maggie found a voodoo doll with Bruno's ascot around it's neck. Barnabas says that Angelique put it there. He says when Quentin ran to Bruno's, Angelique went upstairs and used it to kill Bruno. He then thinks about the sleeping girl at Stokes'. He says that when she moves, Angelique reacts. He says they can get to Angelique through her. Julia says they don't know that they can change her condition. He reminds Julia of her work with Adam. He says they'll bring the girl here to find out her secret, and destroy Angelique forever. Julia says if the body goes missing, Angelique will assume Barnabas has it. He assures Julia he's ready to to battle with Angelique. Julia refuses to help him with the girl. He says it would be easier if she helped, but he will do it alone if he has to. He says they will get the girl tonight, and calls to Will. 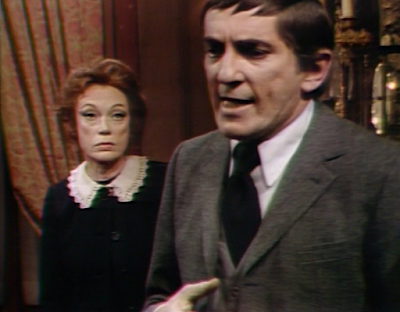 Barnabas and Will go to the Collins' mausoleum. Will says Stokes is a buddy of his, and doesn't believe what Barnabas has said. He adds that if there was a secret room in the mausoleum, he'd already know about it. Barnabas leads him inside and opens the secret door. They see the room is full of furniture. Barnabas finds a drawing of the woman at Stokes' home. It's signed by Claude North. Barnabas asks Will if this is where she lived before; that they must find out. He says the room was his refuge for him forover a century in his own time. He assume now it as a sanctuary for someone connected to her. 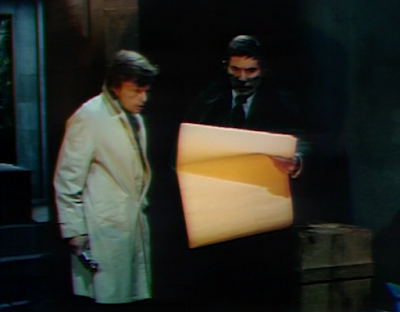 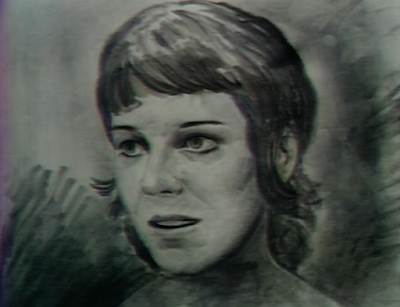 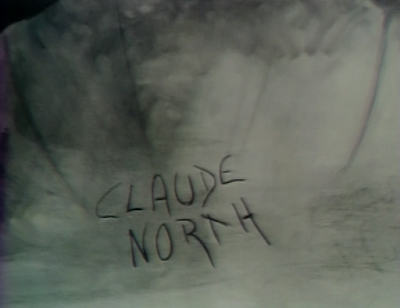 Elizabeth asks Carolyn to go to an antique store tomorrow to sell her hat pins. Carolyn seems upset, and Elizabeth asks her why. Carolyn asks her mother about Angelique's murder at the seance. Elizabeth says that she doesn't want to discuss it, and asks her again to take the hatpins into Portland. Carolyn agrees. 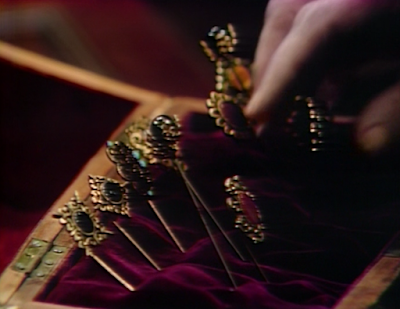 Barnabas and Will arrive at Stokes' home. Will assures Barnabas that Stokes is at the Eagle, and will be there until closing. Will tells him there's someone else in the room with them. He hears Hoffman's voice, saying she won't let them enter. 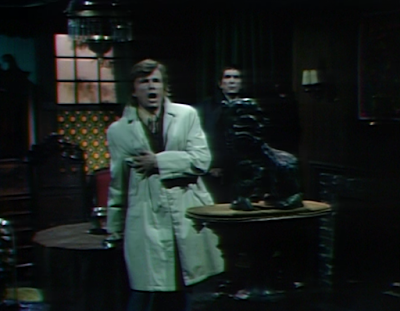 John: Wow. At the end of yesterday's episode, I thought wouldn't it be funny for it to play out like Twin Peaks, and when Carolyn goes to tell Julia who did it—she says she forgot. I guess we now know one possible soap opera source that David Lynch and Mark Frost could have drawn that from!

Christine: So, should we assume that Claude North is the artistic milk drinker who likes to hang out in the secret room in the mausoleum and sketch pretty young girls who become life force providers? I feel like I'm getting parallel time fatigue. I miss our original characters and can't understand why Barnabas cares more about what's happening in parallel time than his own time. He has his own Angelique to fight at home. Is he so obsessed with her that he needs to vanquish every incarnation of her there is? 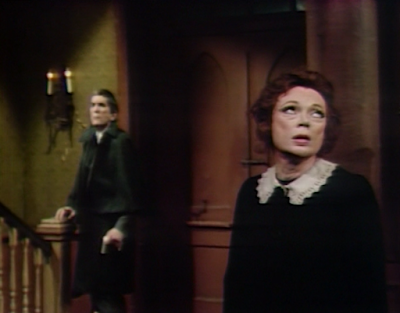 John: Wasn't it obvious that Elizabeth was the culprit when Carolyn said yesterday that she was the first to go to Angelique after Quentin? Now, she may not be the murderer, but that was certainly what they wanted us to think.

Christine: It's what they wanted us to think that Carolyn would think, which means it's definitely not Elizabeth. I think the real culprit is whoever is not acting obviously nervous whenever the séance is mentioned, which now rules out Roger for me. My money is on Trask. He's as shifty as all of his counterparts.

John: Was that Petofi's hand-box now serving as a hatpin box? 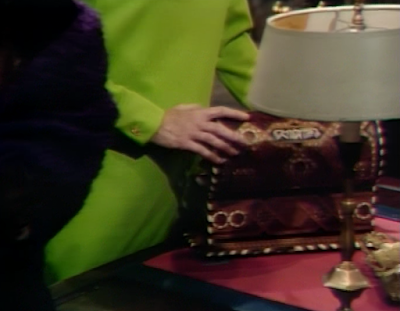 Christine: It certainly is the famous Petofi box that was seen as early as Episode 18 on a table outside Vicki's room. I sense another collection that needs to be compiled.
Posted by John Scoleri at 6:00 AM