Maggie hears footsteps coming downstairs, and hides in the wardrobe. Barnabas comes in and finds Maggie's brush. He looks around the room, and leaves.

Maggie hears the footsteps going upstairs and leaving. She comes out of the wardrobe, and sneaks out of the cell. She sees Yaeger on the stairs and screams. He asks if she thought he forgot about her, and jumps down and grabs her. He says she should have come away with him, but now it's too late. 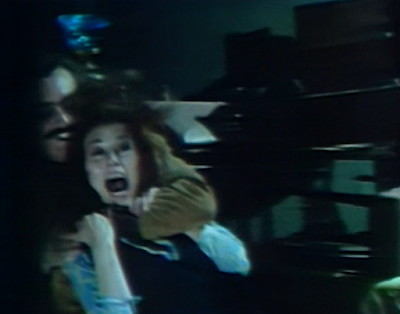 Barnabas tells him to let her go. Yaeger tells him to stay back. Barnabas says to let her go or he'll never leave this place alive. Yaeger says he knows what little time he has left, but he'll go out his own way. He throws Maggie aside and grabs his cane, extending the blade. Barnabas warns him that his weapon will do him no good. He stabs Barnabas in the chest. 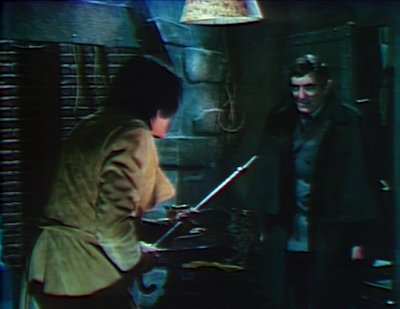 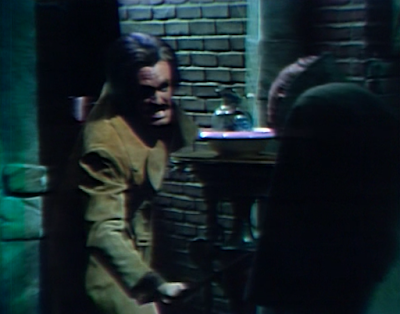 Barnabas pulls it out of his chest. Yaeger asks what kind of creature he is, and Barnabas says he will never know. They grapple and Barnabas strangles him. 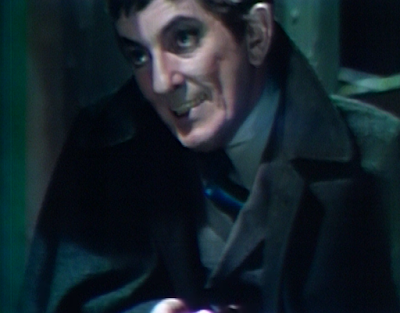 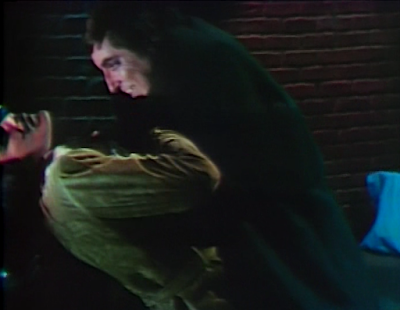 Maggie gets up and calls Barnabas. She comes into the room, and Barnabas says Yaeger will never harm her again. She screams when she sees his body, and they watch as he changes back into Cyrus. Barnabas takes Maggie out. 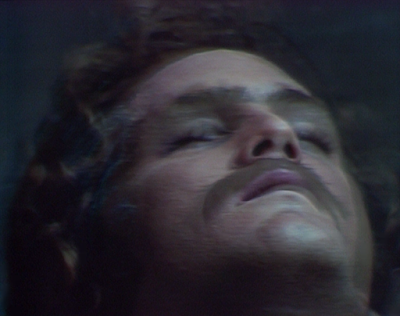 Julia comes downstairs as Carolyn enters. She asks if he spoke to Quentin, and Carolyn says he's chartered a plane, and should be home within an hour. He was terribly upset with the news. Barnabas comes in with Maggie and brings her into the drawing room. Julia asks if he found her at the farmhouse, and Carolyn asks if she was Yaeger's prisoner. Barnabas tells them that Yaeger is dead. Julia asks how, and he says they must tend to Maggie. He directs Julia to get her a blanket. 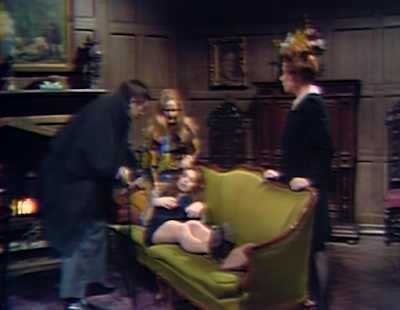 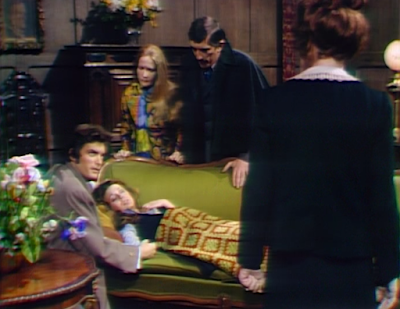 Carolyn tells Julia that the doctor is with Maggie. Julia asks why Quentin came back without Alexis. Carolyn says she doesn't understand why Quentin left with Barnabas. She says she thinks Barnabas knows more than he's telling the rest of them. 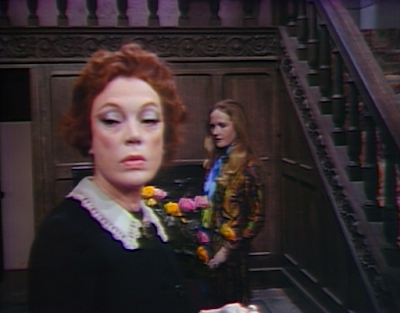 Julia tells Angelique on the phone that Yaeger is dead and Maggie is back in Collinwood. She adds that she found out something concerning Barnabas, and she'll tell her more when she returns. 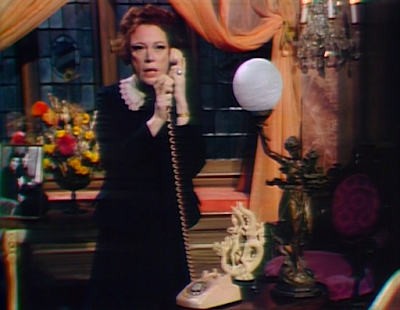 Quentin says it's incredible, and no one could imagine it. Barnabas describes killing Yaeger, and how he and Maggie both saw him transform into Cyrus. He points out that Cyrus was the one who told him where to find Maggie. Quentin says that this was his secret experiment. Quentin points out that someone should have noticed that Cyrus and Yaeger were never in the same place at the same time. Barnabas says that the authorities may have an issue with Cyrus being dead at his hands. He says he's willing to abide by whatever Quentin wants. Quentin says that he thinks it's best that they reveal the whole story. 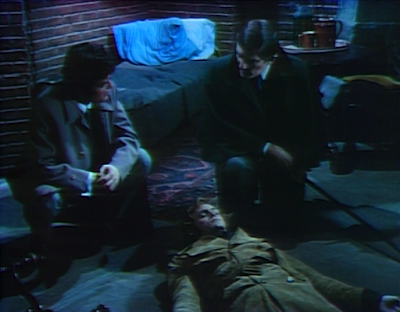 Parallel time Julia opens the door to Angelique's room, and sees herself and Quentin inside. She explains that she tried to dissuade him, but he had made up his mind, and had to go to the other time to save Maggie. Quentin tells her that Barnabas doesn't realize that he too is in danger. He says he's as good as dead if they find out he's a vampire. Parallel time Julia realizes that Barnabas' secret is that he's a vampire. 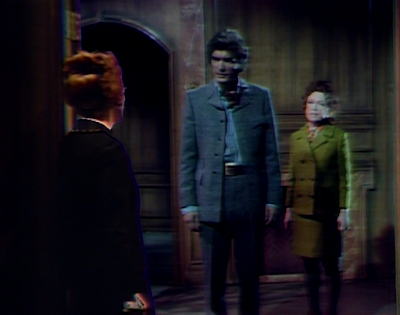 Julia reads up on vampires in a book from the Collins Library of the Supernatural, getting details on how to kill one by driving a stake through its heart. She hears Carolyn tell him that it's impossible for someone to be two people at the same time, and Julia takes a compact mirror out of Carolyn's purse in the drawing room. She uses it to confirm that Barnabas casts no reflection. He bids Carolyn goodnight, and leaves. Julia realizes that she has her confirmation. 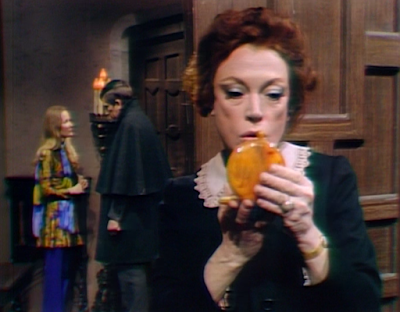 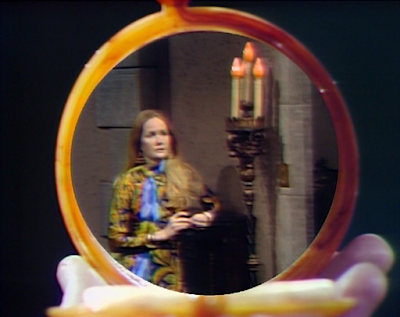 Barnabas settles into his coffin for the night, and closes the lid.

Julia arrives at the old house with a stake and mallet. She takes them into into the secret room and opens Barnabas' coffin. She finds him sleeping inside. She places the stake over his heart and raises the mallet to strike. 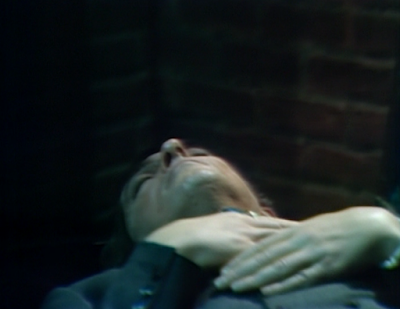 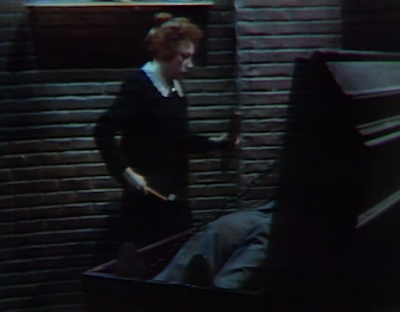 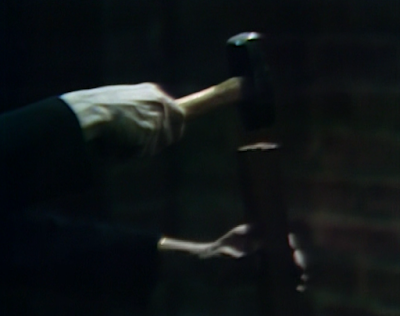 John: I'm a bit disappointed that after the big build-up the other day, Barnabas didn't even have his cane with him when he confronted Yaeger. Makes you wonder what that whole my-cane-is-tough monologue was all about.

Christine: Exactly. What happened to my-cane-is-bigger-than-your-cane? I barely got through a bowl of popcorn and Yaeger/Longworth was already dead. Too easy!

Christine: I was disappointed that Dr. Hoffman, of all people, would not recognize the importance of not having the kind of conversations in that room that could put Barnabas at risk, knowing full well that someone could be watching. It was a nice touch to have Julia discover that Barnabas was a vampire the same way that Dr. Hoffman did back in Episode 288.

John: I almost think we should have a Friday afternoon 'about-to-stake-a-vampire' counter. Who do you think will stop her... Barnabas himself? Carolyn? I think we might see Will return just in time to help out his old pal Barnabas.

Christine: I agree. We could call it "Raising the Stakes." While not a stake counter, here's a blog search for mallet that returns many fine staking moments on the show if you are interested in reviewing them. Ah...such good memories. The Loomis' are the ones entrusted with guarding him, so I expect either one or both of them will prevent the hammer drop on Monday. 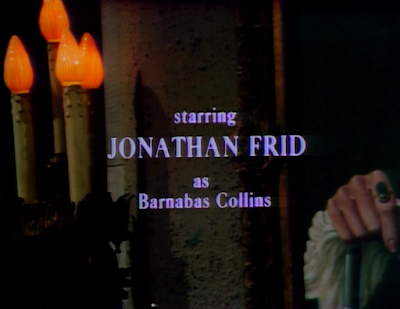