Bruno finishes reading the book and calls Collinwood. Angelexis asks him where he ran off to. He says he was visiting friends and gathering information. He tells her that he knows who murdered Angelique. She urges him to tell her. He agrees to meet her at Collinwood in an hour. 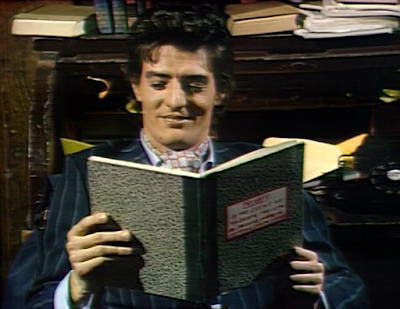 Maggie is coming downstairs when there's a knock on the door. She lets Bruno in. He mentions that he heard about her terrible experience, and asks who would have though Cyrus was capable of something so cruel. Quentin comes in and tells Bruno to tell him what he wants and get out. Bruno explains that he was invited by Alexis, and Quentin sends him off to see her. 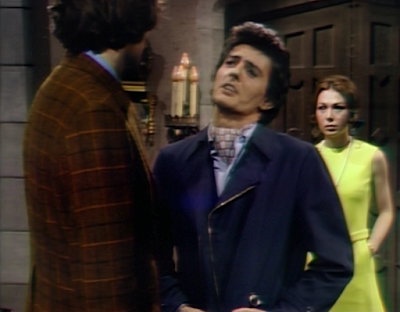 Quentin asks Maggie how she's doing, and if he's forgiven. She says he is, but he doesn't buy it. She asks him why he took Alexis to Bangor with him. He laughs and suggests that she's jealous. 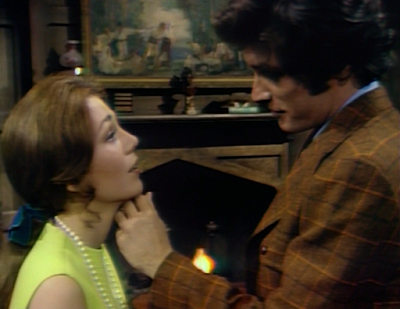 Bruno comes to Angelexis' room. She asks him for his proof, and he says he realized that someone might pay handsomely for it. She asks how much he wants, and he says $5000. She agrees to his price, and asks him who killed her sister. He says he'll tell her once he has the money. She says she can get the money in two hours, and he agrees to return then with the evidence. 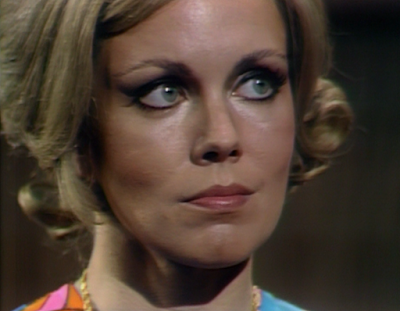 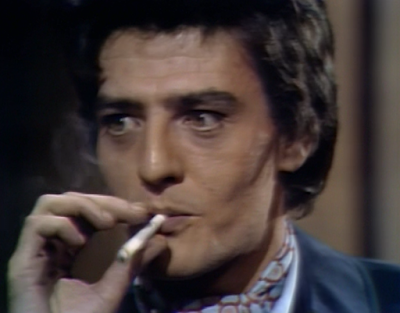 He leaves and she opens a box, removing a diamond necklace. 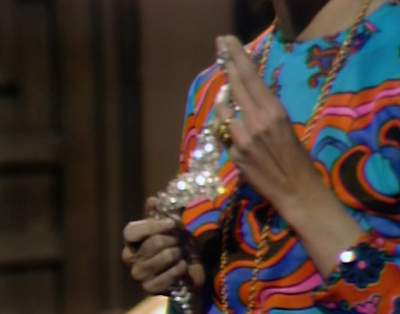 Maggie and Quentin are sitting in the drawing room. She wonders if Cyrus was responsible for everything going on in Collinwood. Quentin assures her that Cyrus was fine until he became Yaeger. He asks her why Yaeger would want to destroy their lives. Angelique returns to Collinwood and hears them talking. Quentin tells Maggie that he'll believe anything with proof. Maggie asks him if things have ended for good now that Cyrus is dead. Angelique smiles, knowing that Maggie is wrong. 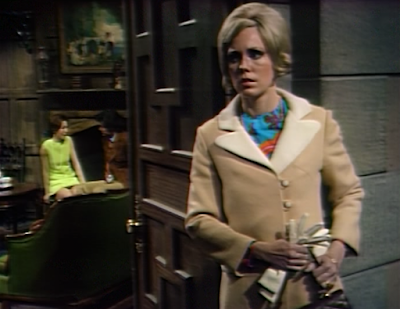 Bruno is in Angelique's room when Angelexis comes in. She hands him an envelope with $5000 and asks for the evidence. He hands her Cyrus' notebook while he counts money. She asks if she has to read the whole thing and he tells her he folded over the relevant page. 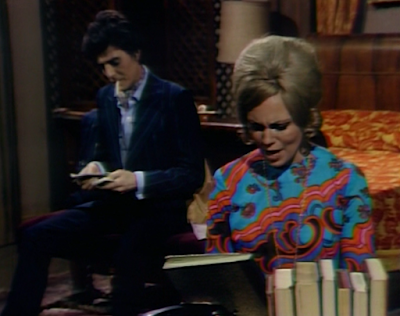 She reads it, and appears shocked. He says he sees that she knows the name of Angelique's murderer. He tells her to read it out loud. She reads from the book, Cyrus saying he knew Angelique was murdered, and that Quentin had murdered her. He found the hatpin he stuck in the base of her skull. He says he forged the death certificate out of loyalty to Quentin, sure that he didn't know what he was doing when he killed her. 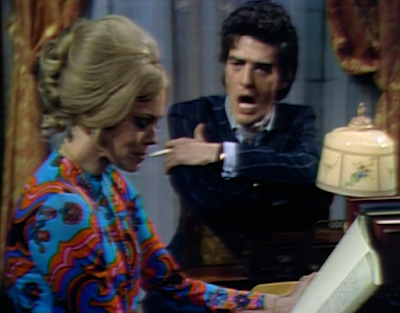 Angelexis says she was always suspicious of Quentin, but she still finds it hard to believe. Bruno tells her that Quentin was jealous of him, and she says she doesn't care. She says she wants him to suffer. Bruno asks if she's going to go the police immediately, and she says she's going to do what she thinks Angelique would have done. She asks him to never tell anyone about the journal. He says he'll go along for a day or two, but if she doesn't do something, he will. She reminds him that she has the book now, and he explains that he has a copy of the page. She tells him that she'll make use of the information very soon. He leaves, and she thinks that it won't be long, and Bruno will be involved. 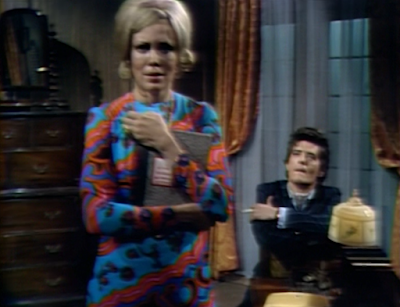 Quentin asks Angelexis why she's looking at him like she's angry with him. She says she's not. Maggie goes upstairs to rest, and Angelexis says she'll try to comfort Maggie. 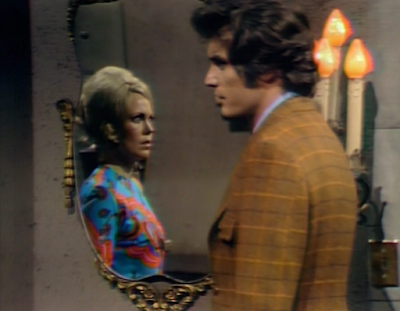 Maggie is in her room when Angelexis comes in with some tea. She picks up a piece of Maggie's jewelry as she tells Maggie to call on her if she needs anything. She leaves, and Maggie pours herself a cup of tea. 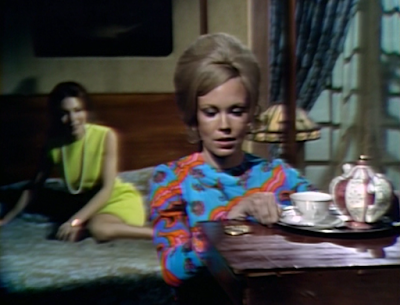 Angelique sits by the fire and sends thoughts to Maggie, saying that she will do as she commands.

Maggie puts down her teacup, and gets up and leaves her room.

Angelique directs Maggie to go into Alexis' room. She picks up a necklace and returns to her room to begin her first attempt at witchcraft.

Quentin finds Angelexis in the drawing room. She tells him that Maggie seems strange. She grabs her throat and says she's choking. He tries to help her. She says she can't believe it, and says there's a witch, and begs him to stop her. Quentin runs out of the room. 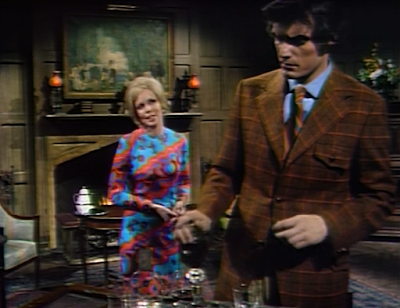 Quentin bursts into Maggie's room and finds her twisting Alexis' necklace. He tells her that she wanted him to believe Cyrus was responsible, but she's a witch, and responsible for everything going on in the house. 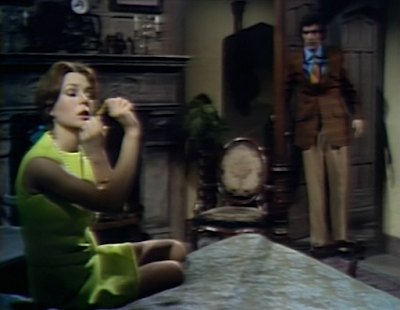 John: I thought Bruno was planning to take the money and run. I think he's going to regret not doing that before the week is out.

Christine: I would expect him to stick around so he could hit up Quentin for a much larger sum of money. It's interesting that he didn't go to him first to blackmail him.

John: So Quentin strangling Angelique, which everyone saw, wasn't enough to convict him because his best pal Cyrus lied on the death certificate. But it turns out it wasn't strangling her that killed her, but shoving a pin into the base of her skull? So much for the crime of passion theory, Cyrus. Seems like you had some 'bad dude' in you long before John Yaeger came to Collinsport!

Christine: I'm having a hard time understanding how this went down. Angelique told Julia in Episode 1015 that she knew she was murdered because she felt a pin at the back of her neck. If Quentin was sticking her with a pin while he throttled her, she would have known he was responsible for murdering her. Perhaps the pin poking happened after he choked her to unconsciousness. How is it that nobody else saw her get pinned?

John: Interesting twist on Angelique's part, setting Maggie up as a witch. She played right into Quentin's hands, given how freely he tends to fly off the handle at the slightest provocation. What I don't get is why he ran out on Angelexis in the throes of agony.

Christine: He ran out because she was screeching about a witch and how he needed to stop her, which he was eager to believe rather than considering the more likely possibility that she could be having a medical emergency that required an ambulance call. What do you suppose her latest great convoluted supernatural plan is for avenging her death? Will she kill two birds with one stone and put the cold kiss of death on Quentin? After she's made him everyone else around him suffer first, that is. 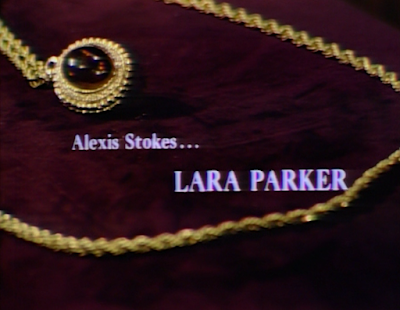