Yaeger drags Maggie into her dungeon room. She asks where Cyrus is, and begs to be let go. He pauses for a moment and says he never thought he'd mind seeing a woman cry. He tells her she'll learn to like the place, and locks her in. 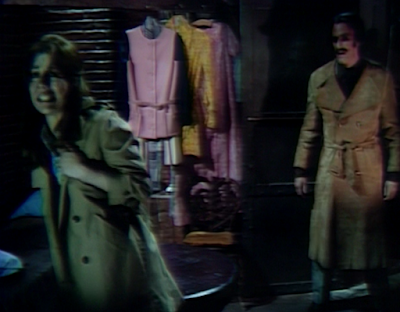 Maggie explores her surroundings. She finds the shell Daniel gave her on the table. Yaeger comes in with food. She tries to escape but he grabs her and tells her to get back inside. He says he brought her curry for supper. She points out that he stole her things, and he says he didn't steal them, he brought them over. He says he's been planning this since he met her. He pours a glass of champagne. She tells him that he's got to let her go. He says that a day will come when they can walk out the door together. He promises that she will love him. He says he's not going to force himself on her, but time will change her mind. She says they'll come looking for her, and he says she left the house of her own accord after a fight with her husband. 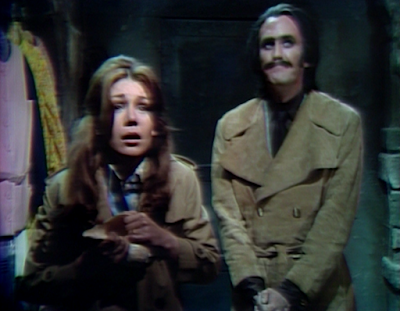 He sets up chairs so they can have dinner. She begs him to let her go. She says she was supposed to meet Cyrus, and when she doesn't show up he'll go to Collinwood. He says Cyrus won't go looking for her. She asks if he did something to Cyrus, and Yaeger says he killed him. He says he's got a lot in common with him. He reaches for her and she tells him not to touch her. He tells her she's going to regret that, and locks her in the room. 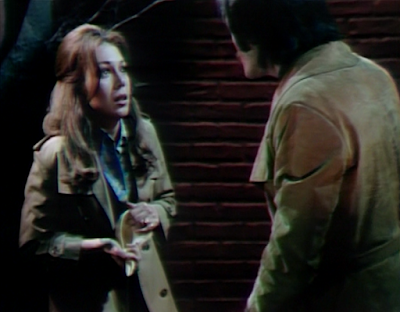 Elizabeth asks Angelexis how Quentin could let Maggie run out in the middle of a storm. She says she can't understand why they're so unhappy. Elizabeth says she wonders if Quentin us capable of loving anyone now. Angelexis sees Yaeger outside, and she tells Elizabeth that she's going to look for Maggie. Elizabeth decides she's going to have a talk with Quentin. 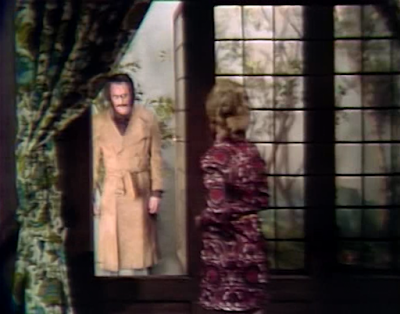 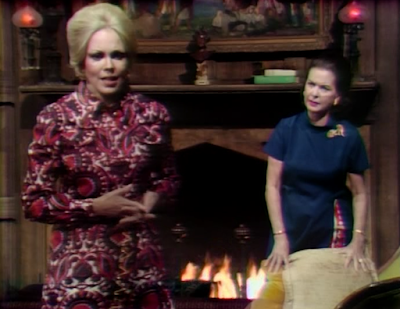 Angelique meets Yaeger in the garden. He complains about how Maggie is behaving. Angelique castigates him, saying he knew it wouldn't be so easy. She tells him that he must rob her of every defense she has. Only when completely vulnerable will she turn to him. 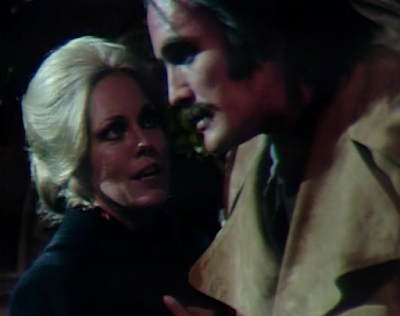 Maggie thinks there must be a way to escape. She wonders where she is. She is confident that Yaeger left, so she tries the door, but it won't budge. 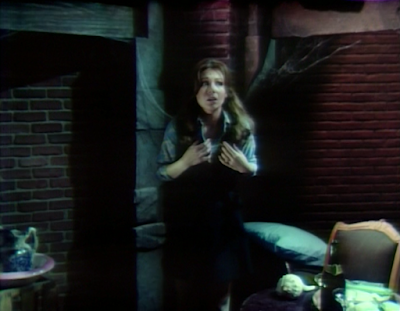 Yaeger returns and asks Maggie if the room is comfortable enough for her. She says he's got to let her go. He explains that's the one thing he cannot do. He says there's something he wants her to do, and she says she won't do anything. He tells her to sit down, and threatens her with his cane-blade. She does. He says he's concerned about her husband, and she should write him a note. She tells him that he can kill her, but she won't write a note. He tells her that he'll kill Quentin if she doesn't do what he says. He tells her to pick up the pen and write a note. He dictates a note for her. 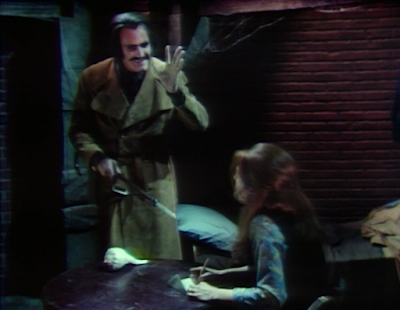 Elizabeth tells Roger that Maggie's sister hasn't heard from her. He asks her why she cares. He says she was terribly out of place in Collinwood, and her absence is good riddance. Roger says that Quentin should be concerned, not her. He says he's sure Quentin wants to forget he ever met her, so she should quit trying to bring her back. Angelique comes downstairs and is overtaken with chills. She realizes that she must find someone.

Roger says soon everyone will forget Maggie within a month, and Elizabeth says the only ones who will forget her are those who didn't acknowledge her when she was there. She leaves as Angelexis walks in. She stands by the fire, and Roger says she looks just as Angelique did. She moves, and says she doesn't want to think about her sister. He tells her he can think of nothing but Angelique. She says she was determined to find Angelique's murderer. Roger says he thinks his own life ended the night she died. Angelexis draws him closer and asks him to hold her. He's overtaken with a chill. 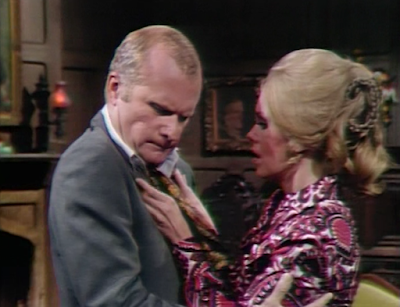 He says that since she's been back, it's been like Angelique was there. She tells him to kiss her, explaining that she's cold. She asks him to kiss her, and as she pulls him close, Elizabeth interrupts them. Alexis runs off, and Roger says he feels so cold, as if he's touched death. 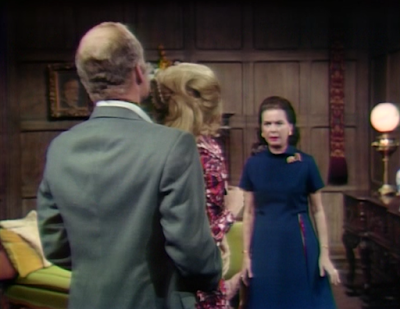 Angelique visits her father, explaining that she sucked the warmth out of a stranger on her way over, leaving behind his cold, dead body. She tells her father that he's responsible for bringing her back, and that there must be a means to resolve this. She asks him why he won't tell her what he did. He says he's the first modern scientist to work with black magic. He says that he returned to an experiment long ago, and he did not do it alone. She asks him to take her to someone who can help her. He points to a curtain, and tells her there's something behind it. He says he did it for her. He tells her that he did it for her. She says at last she'll meet who made returning to Quentin possible. He says she must go alone. She pulls back the curtain, revealing a door. 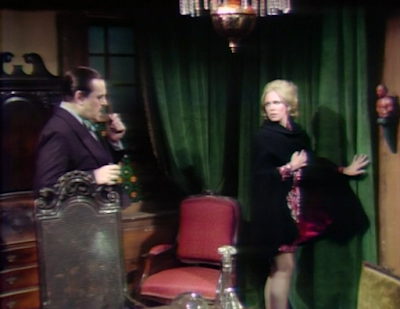 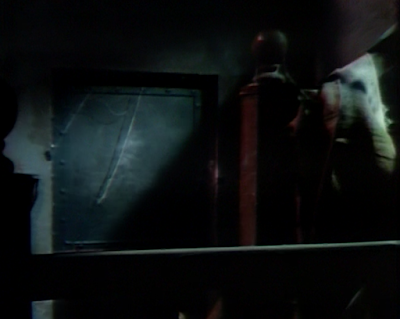 Christine: The spider webs must be part of the customizing. Perhaps you can order them with ready made blood stains too. Yaeger has now decided he's not going to force himself on Maggie, and wants her to fall in love with him, contrary to his evil character. Perhaps Cyrus is exerting some influence. 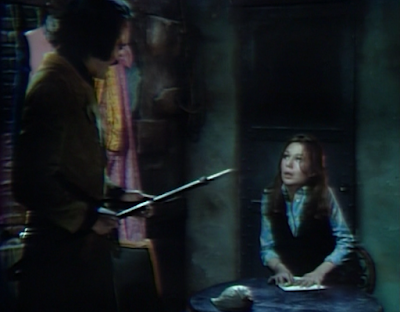 John: How many times has Maggie, or her past ancestors, been kidnapped now? 3 or 4 times? Even parallel time won't let her escape these recurring events!

Christine: I think she and Vicki were on par for being kidnapped and locked in isolated rooms, but now that Vicki is gone, it seems Maggie must bear the brunt. 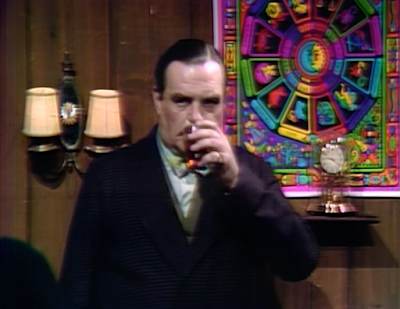 John: Cool poster at Stokes' place. Too bad he didn't have his black light turned on. Now why exactly would Stokes have a door installed behind a curtain? Please don't let it be a door into parallel time that he just had installed after discussing the topic with Angelique...

Christine: That is one groovy zodiac poster! It's interesting that Stokes has some of the same furnishings found at Aunt Hannah's pad. Do you suppose all occultists have that same gargoyle statue or is it a family thing? I could have sworn that Hannah also had that taxidermy bird, but I can't find photo evidence, so I am wondering if I may have seen it somewhere else on the show. 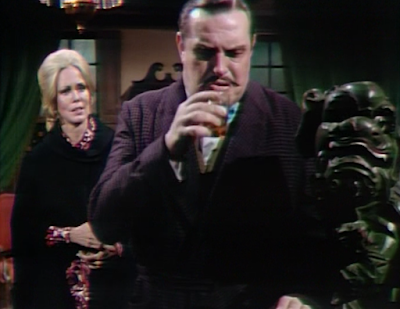 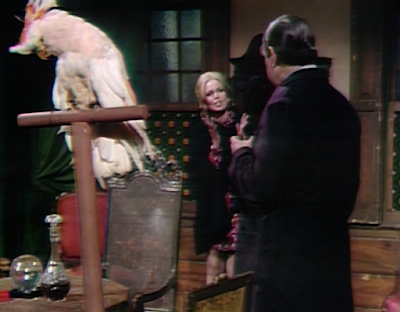