Julia arrives at the old house with a stake and mallet. She takes them into into the secret room and opens Barnabas' coffin. She finds him sleeping inside. She places the stake over his heart and raises the mallet to strike. Julia from our time band strikes parallel time Julia with a fireplace poker, knocking her out. 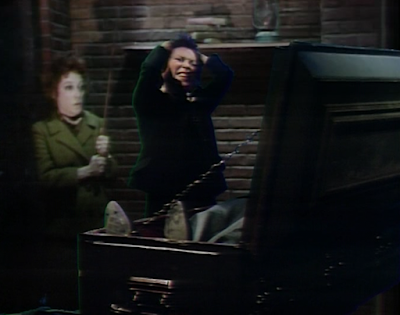 Will is upstairs at Collinwood at dawn. He wonders where Julia went, and realizes she may have gone to the old house. He starts to head out when he runs into Angelexis. She asks if it's true Cyrus took Maggie. She gives Will the third degree and he tries to excuse himself. He finally just leaves abruptly. 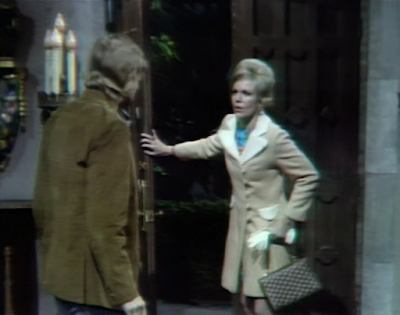 Julia closes the secret panel at the old house, and on her way out, there's a knock at the door. Bruno comes in and asks her what she's doing there. She says she came on an errand. He notices that her hair and clothes are different. Julia says she was on her way into town. He asks her where Will is, and she says she doesn't know. Bruno says he wants to borrow some money from him. He asks her for a five-hundred dollars. He says she's got plenty after he, Angelique and others slipped her money for her cooperation. He says she doen't sound like herself, either. She assures him that she is who she is. Bruno attributes it to the time they've been apart. He leaves. She goes back into the secret room and realizes that she's killed her parallel counterpart. She wonders what she'll do. 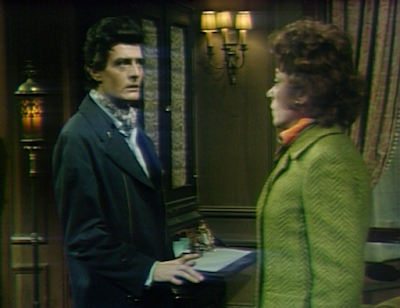 Will returns home and notices the secret room panel is open. Julia steps out and he pulls a gun on her. He says he figured he'd find her here. She tells him she's not Hoffman, that she's a friend of Barnabas. She points into the room and says Hoffman is in the other room, dead. He goes in and is shocked. Julia explains that she's from another time. He realizes that she's the Julia that tried to cure Barnabas, explaining that Barnabas told him. He asks how she got there, and he says she came through the portal in Angelique's room. She arrived just in time to save Barnabas. 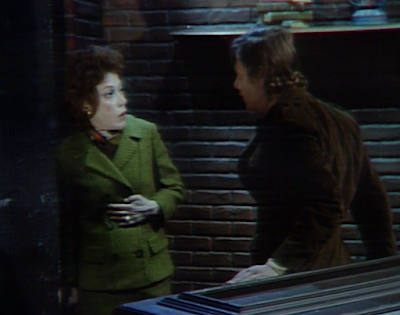 Angelique calls her father to see if he's seen Julia. She says that Julia told her she had discovered something about Barnabas. 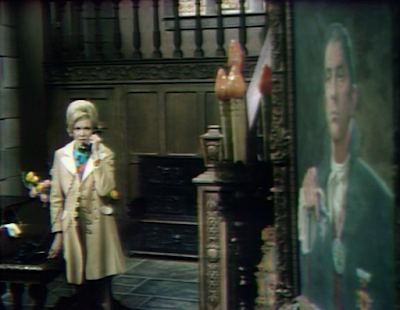 Bruno enters and she hangs up the phone. He asks her where Will is, and she says he was here but he left. He asks her where Quentin is, and she says he's probably sleeping after last night. He asks what she means. She tells him how Cyrus abducted Maggie. He doesn't believe it. She says it was a man named John Yaeger, but he and Cyrus are the same person. He thanks her for the clarification. 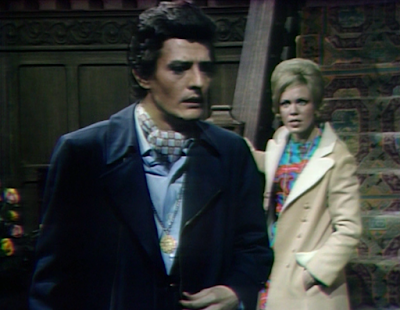 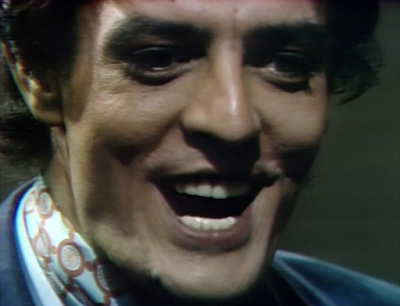 Julia tells Will that she has been interested in Barnabas for a long time—as a doctor. She wonders if Hoffman told Angelique Barnabas' secret before she came to the house to kill him. She suggests that Hoffman may have written a note, and ask him to go check. 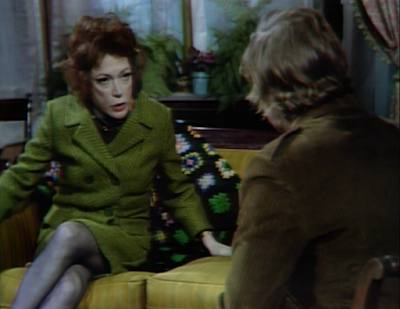 She realizes that he has to stay with Barnabas to protect him, and decides to go on her own, disguised as her parallel-self. She says she'll put on her clothes and fix her hair. He tells her it's risky. 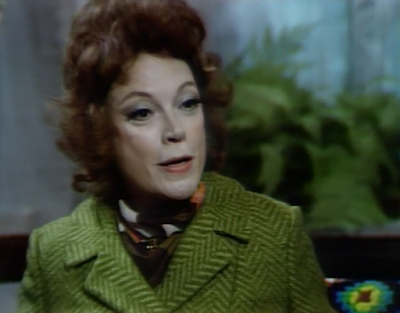 Bruno goes to Cyrus' lab and searches for the combination to his safe.

Julia comes to Hoffman's room, wearing her clothes. She searches for a note. She isn't having any luck when Angelique comes in and tells her that she knew they would meet sooner or later. She asks he what happened. Julia says she told her on the phone about Cyrus and Yaeger. Angelique asks her about the information she found out about Barnabas. She demands that she tell her everything. Julia says she meant that Barnabas called Barnabas, and that's how he knew to go to the farm. Angelique asks where he is now, and she says he went into town. Angelique tells her to resume following him, and this time keep in touch with her. 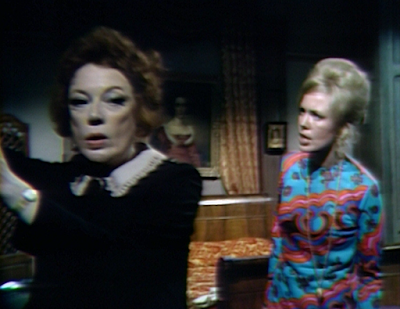 Bruno got the safe opened, but can't find any cash. He finds a book labeled "To be presented unread to Quentin in the event of my death." He sits down to read it. 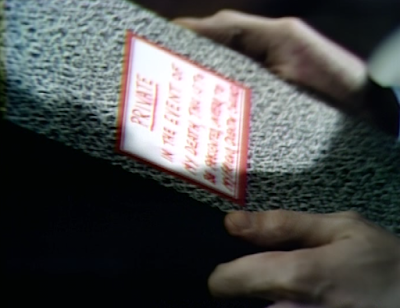 Julia tells Will that Angelique didn't know about Barnabas. She adds that they knew who was holding Maggie. Will asks if she wants to change out of the clothes, and Julia suggests that she'll continue to impersonate the parallel Hoffman. Will warns her that she'll slip sooner or later. She says it's the perfect way to find out what Angelique is doing. He disagrees. Bruno finishes reading the book and calls Collinwood. Angelique asks him where he ran off to. He says he was visiting friends and gathering info. He tells her that he knows who murdered Angelique. 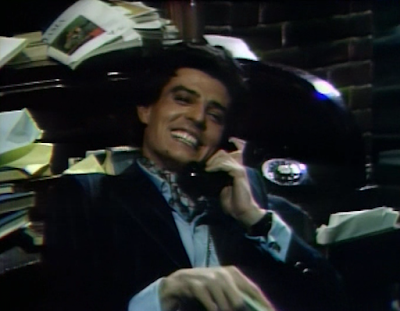 John: Who knew that Dark Shadows was the real source of Julia & Julia! I'm looking forward to all kinds of fun of our friendly neighborhood Julia pretending to be the cold, callous Julia of parallel time!

Christine: I look forward to Julia's impersonation as well, but expect it will be short lived. I don't think she can pull it off the way she tends to overemote. I don't understand why she doesn't just wait until loverboy wakes up in his coffin so they can head back to their own time together. Maggie has been saved, so why get involved in the drama of parallel time when they have their own drama to keep them busy? Funny how she clarified her interest in Barnabas was from a doctor's perspective. Yeah, right!

John: Can you believe that Barnabas didn't do anything other than lie in the coffin today? That may have been the episode's biggest surprise!

Christine: Perhaps he's had some coffin rest days written into his contract. He did just make a movie, after all, and probably needs some down time.

John: It seems odd to me that a servant like Hoffman would be rolling in dough due to payoffs from the likes of Angelique and Bruno. Seems to me that if she liked her job, she'd keep her mouth shut! Well, now that we have an alternate Hoffman, I expect we'll be hearing all about her misdeeds...

Christine: It will be interesting to find out what Bruno has learned from Cyrus' journal and how he intends to make money from it. Do you suppose Cyrus killed Angelique? Nice to see that Alexis had a chance to pick up a groovy new dress and trendy hairstyle while in Bangor. 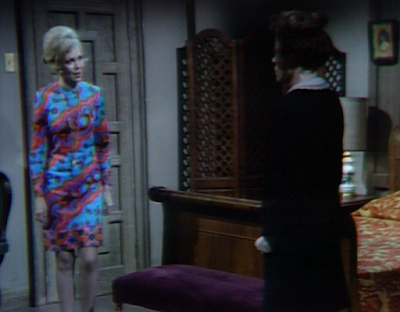