As he looks for Quentin in Collinwood, Will says he must be careful, because Maggie says he's gone mad. He thinks Quentin will know he wants to help him. He then wonders if Angelique has somehow changed Quentin. He searches the tower room in the West Wing, and finds a tie. He hears footsteps, and the door begins to open. It's Angelexis. She asks him why he's there, and he says he could ask her the same question. She tells him that she lives in the house. He tries to leave, but she closes the door. She tells him he should have known they would have a private meeting sooner or later. He calls her Alexis, and she says he knows her name. He says she's made a mistake. She says Barnabas made the mistake, not knowing how much they were always drawn to one another. She asks him if he remembers. She tells him that she's his Angelique. He says Angelique is dead. She caresses his face, and asks if he remembers all the nights they spent together. He'd read to her by the fire, and tell her that she was his inspiration. She kisses him. 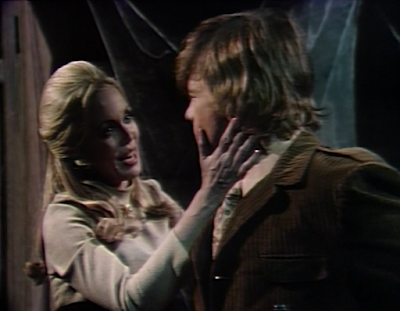 Barnabas says they won't accomplish anything with the body until tomorrow. Julia says Angelique keeps asking her questions, but she'll come as soon as she can tomorrow. He feels something, and senses Will is afraid. He says he must help him, but she reminds him it's almost dawn. He says she can't help Will without giving up her secret. She says she'll find a way. He reminds her Angelique is dangerous. 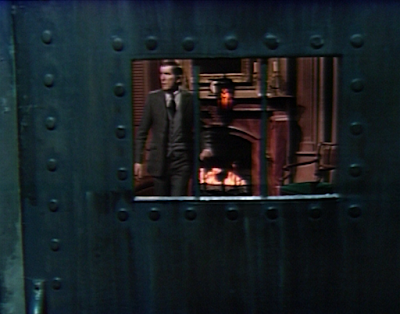 Angelique tells Will he never could resist her. She says they're all alone, just the way they always wanted it. He breaks away from her, and she says something or someone has changed him. She tells him she wants the truth. She demands that he look at her. 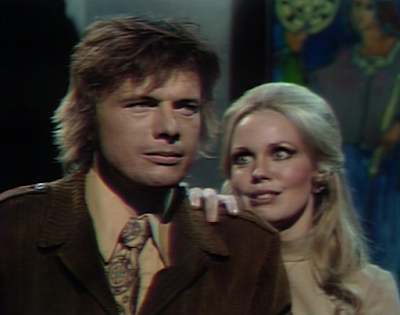 She asks if he knows the truth about her, and he says he does. She asks if Barnabas told him. He promises no one will ever know her secret. She says she wants more from him than just a promise. He screams at her to leave him alone. She demands that he tell her the secret of Barnabas Collins. 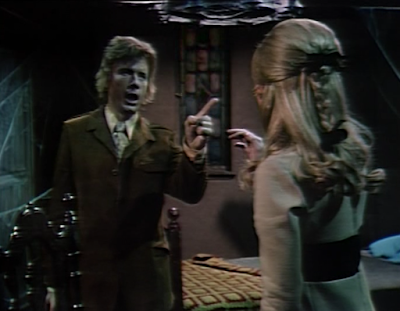 He says Barnabas doesn't have any secrets. She says she knows he's cursed, and she wants to know about his powers. Will tries to avoid looking into her eyes. She commands him. He says he'll never do it. He tells her that she's evil and he hates the sight of her. 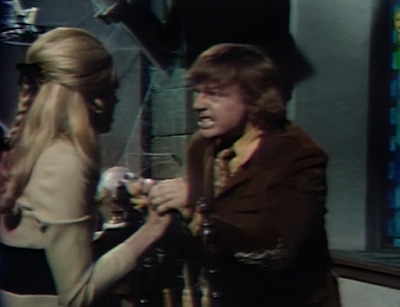 She wants to know what kind of power Barnabas has over him. She tells him he's Barnabas' slave. She tries to convince him how his life could be better with her. He threatens to jump out of a window. He says he won't betray Barnabas. Julia walks in on them and Will falls out the window to the ground below. 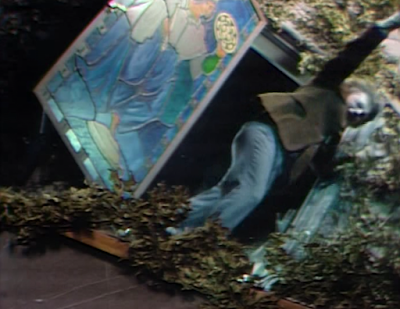 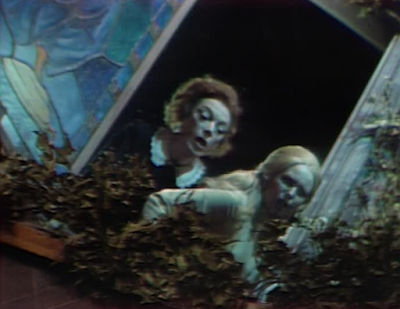 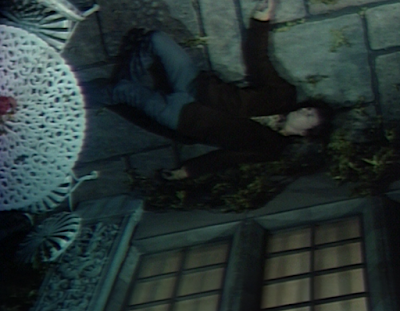 Angelique yells at Julia, saying she made him do it, and ruined everything. She asks why she came into the room. Julia said she thought she might be in danger. She asks how she knew she was there. Julia says she heard voices. Angelique runs outside to check on Will. 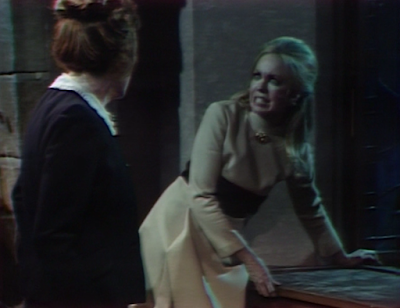 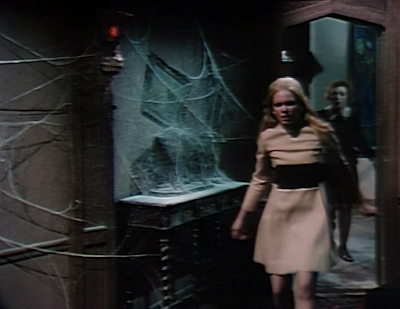 Angelique and Julia examine Will. Julia says his spinal cord was severed on impact, and he died instantly. Angelique asks her if she has a medical degree. She wants to know how she died. Julia says she had previous experience seeing someone who had died similarly, and that's what the doctor said. They go inside to tell the others about Will. 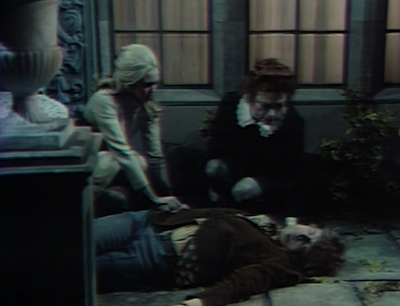 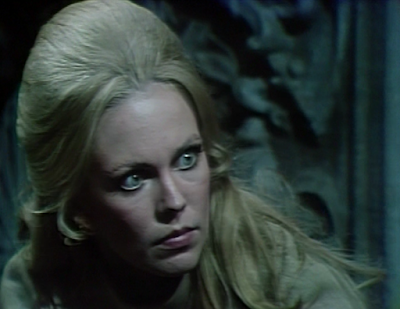 Barnabas rises for the night. He goes to check on the body in the secret room, and finds Angelique waiting for him in the foyer. She says she hasn't been there long, but she hasn't been snooping around to find his secrets. She says she came to pay her respects to the widow, but she can't find Carolyn. He asks what she did to Will. She says she is not responsible for his death. She says Will jumped to his death rather than giving up Barnabas' secret. She says she very nearly found out what he is, and she's now determined to find out. 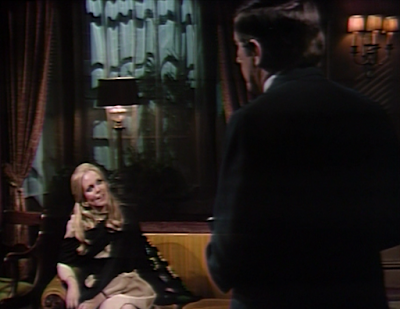 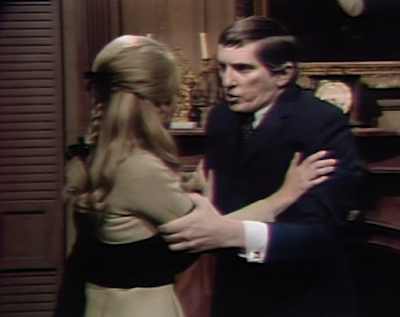 Julia tells Barnabas she arrived too late to save Will. Julia gives the the woman an injection and shock treatments to render Angelique helpless. Barnabas watches as the woman glows. He says it isn't working. She turns off the switch. She says they can try again later. She suggests that Barnabas stay with her, and leaves for Collinwood. Barnabas asks the woman if he was wrong to bring her there. He places his hand on her cheek and her eyes open. 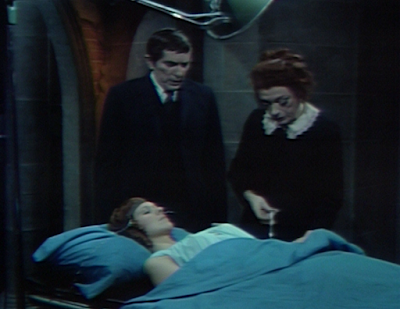 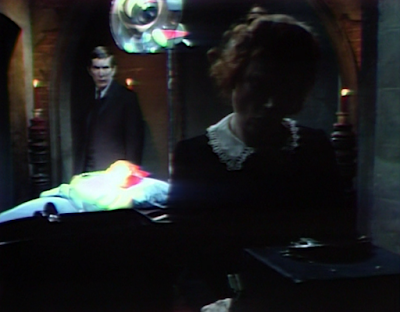 Angelique is coming downstairs at Collinwood when she starts to faint.

Barnabas helps the woman up. 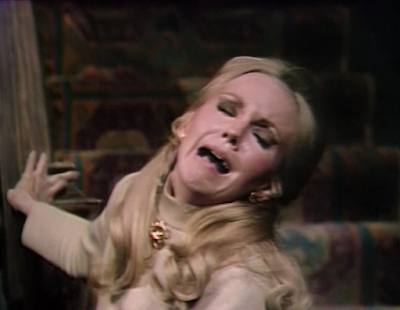 John: I wasn't expecting Will to be able to withstand Angelique's charms. I'm pretty impressed that he did. And while he was threatening to jump, it sure does seem like Julia's the one to blame for Will's death.

Christine: She and Barnabas were both responsible for his death. If Barnabas and Julia had not decided to remain in parallel time, William H. Loomis may still be alive. Now Carolyn is a widow in both timelines. Way to go, dynamic duo! I really enjoyed John Karlen's anguished performance. 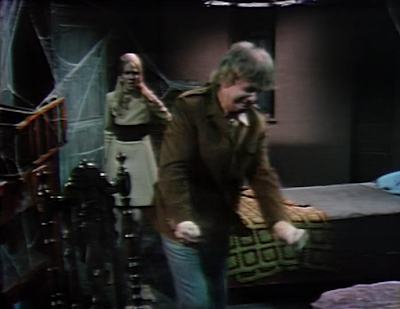 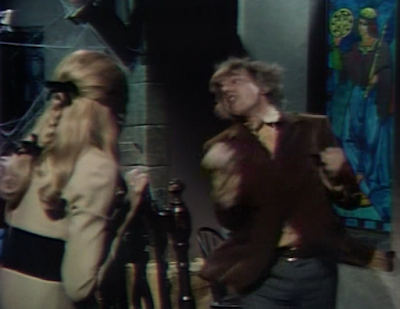 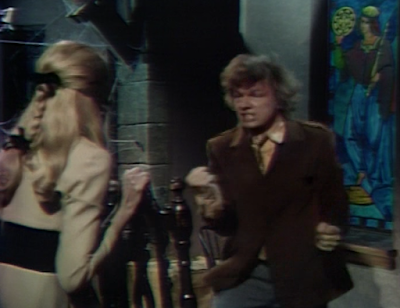 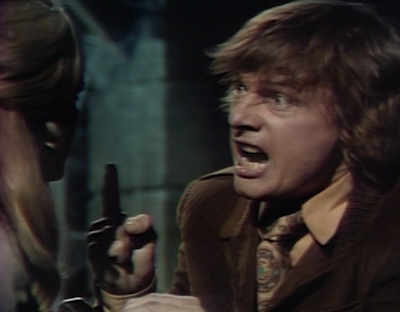 John: I thought for sure we were going to find out that Angelique captured Julia after she let slip her expert opinion on Will's cause of death. But no, she appears to have bought the story about having seen so many dead men fallen from heights, and listen to so many experts weigh in on the cause of death, that she was able to make the instant connection. Yeah, right...

Christine: It seems that all those mistakes are going to add up pretty soon.

John: So when exactly did they install a Frankenstein lab in the old house?

Christine: I was wondering if they went back to their own time while we weren't watching to haul over all their Adam equipment. That was a preposterous setup. I'm not sure I want to endure a flashback to the Adam storyline, or another storyline where Barnabas does dumb things because he's enamored with a woman. 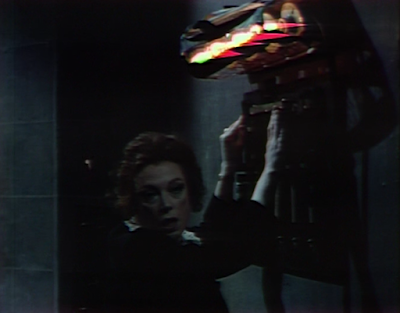 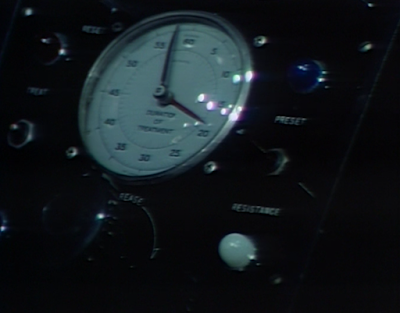 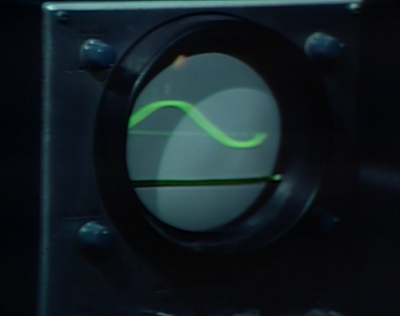