Julia and Barnabas use Angelique's key to get into Stokes' house. She asks if he's having second thoughts. He says no. They stand over the covered body, and he says another innocent must die. Julia says she's not truly alive. Julia takes the knife, and Barnabas says it must be done. She says that then they'll have to decide what to do with Stokes, to ensure he doesn't find another body for Angelique. Barnabas takes the knife and raises it to strike when Julia pulls back the cover. He doesn't recognize the woman, but he says she's beautiful. He says he cannot do it. Julia says they'd be destroying Angelique. He says he'll find another way. 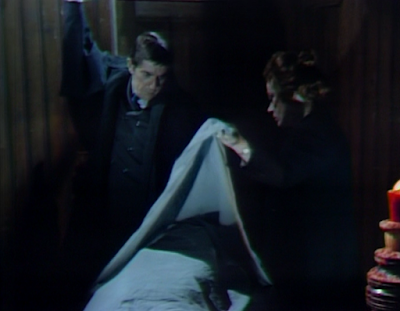 Julia says whatever he feels for this woman condemns everyone at Collinwood. He asks her to check the body, to see if they can bring her back to life, and leave Angelique in this state. He says she can tell Stokes that she wants to help him with his experiment. She tells him that he is wrong, and anything that happens at Collinwood will be his responsibility. 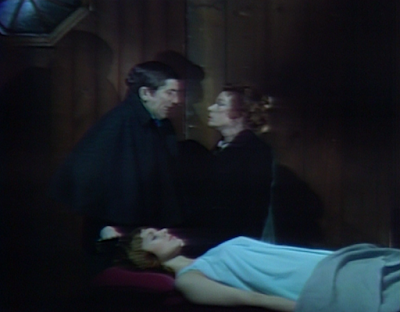 Stokes pours himself another martini. He tells Roger that he must be shocked to be having drinks with him again. Roger says he's had a shock today, finding out he is the executor of Cyrus' estate. He excuses himself. Stokes says he always admits it when he needs money, but Roger and Elizabeth won't. Angelique tells him that every one of the Collins' are going to suffer, except her son. Stokes asks what she's going to do, and she says nothing. He realizes that she's going to have someone else do her dirty work. 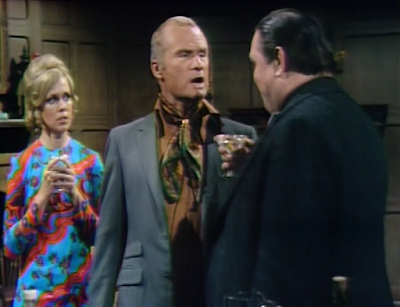 Julia says the woman's heart is barely beating, and she has a weak pulse. Julia wonders how Stokes does it. Barnabas assures Julia that when she wakes, she'll be perfectly fine. He grabs her hand and tells Julia that she moved. She tells Barnabas to hold her hand tighter. The woman's eyes blink open. 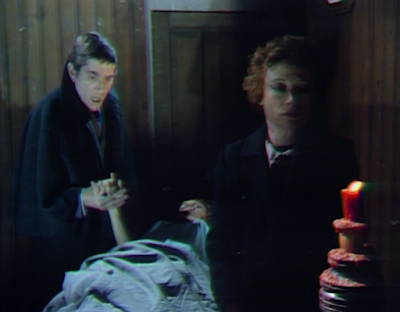 Angelique suddenly starts to faint, and mentions the body. Stokes realizes that someone is in the room, and rushes out. 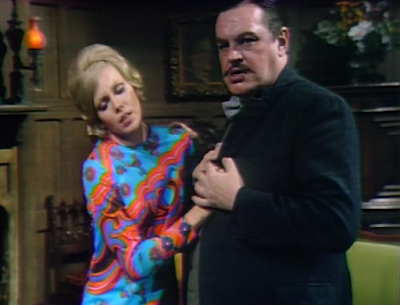 Barnabas asks the woman if she can see him. He asks her to tell them who she is.

Stokes returns to his home. Barnabas and Julia hear the door open. She says something has happened to Angelique, because he's back. Julia tells Barnabas to leave. He disappears as Stokes comes in. 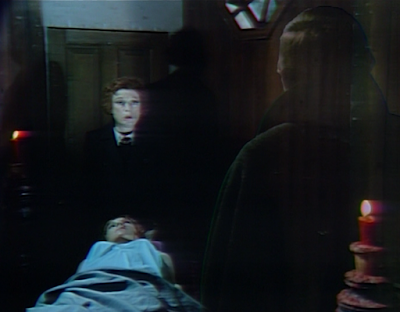 Julia says thank god it's him—her hand moved. He asks what she's doing there. She says she had a premonition. He ponders this. She reiterates that her hand moved and eyes opened. Stokes says he has to check on Angelique. 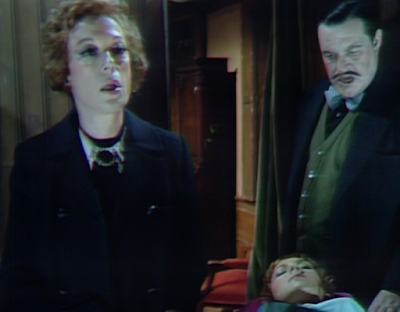 On the phone, Angelique tells her father that she's alright. Maggie comes in as she hangs up. Angelexis tells her that Quentin hasn't come back. Maggie says she's read that a couple shouldn't go to sleep without having made up after a fight. Roger butts in and says she may have to stay awake for  a long time. Angelexis tells him he doesn't know what he's talking about. She offers to take Maggie upstairs, but she chooses to stay downstairs and wait for Quentin. Maggie and Roger argue, and she tells him to get out of the house, pointing out that it's as much hers as it is his. He agrees, but asks her for how long... 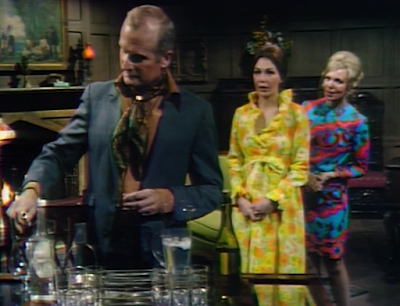 Bruno is playing the piano in the cottage when Angelexis stops by. He says she enters rooms the way Angelique used to. She asks if he liked having her by his side. He asks what the police said when she brought the diary to them? She smiles, and he asks her if she went to the police. She tells him that she paid $5000 for the journal, and she'll do with it what she wants. She says there's no proof that Quentin did what Cyrus said, and she needs absolute proof before going to the police. He grabs her and tells her that she must. She tells him not to ever touch her again. 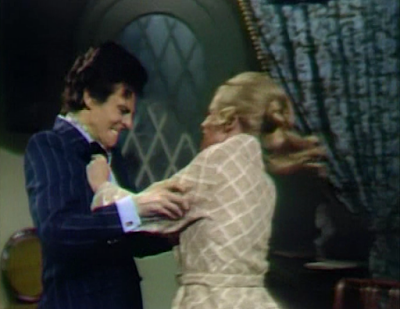 She suggests he have a drink to settle his rattled nerves. He does. She calls him an innocent child. She says she just spoke to someone who mentioned how attracted to him she was. He asks who she's talking about, and Angelexis says it was someone at the main house. He realizes she's referring to Maggie. She asks what it is that makes him so appealing to Quentin's wives. 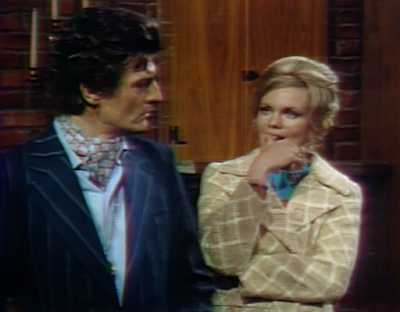 Maggie pours a drink and hands it to Bruno. She says she enjoys his company. He says that Quentin wouldn't appreciate his being there. She tells him that she heard one of his recordings, and he plays brilliantly. He says it's one of his many talents. They flirt a bit, and Roger eavesdrops on them. Bruno tells her that she has a talent for loving, and goes to kiss her. 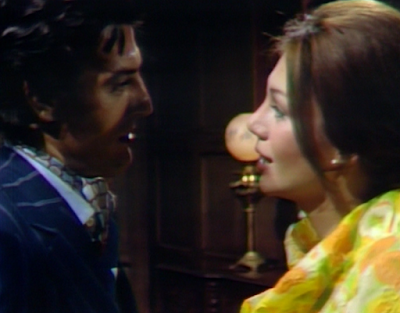 She realizes someone is listening and opens the door thinking it's Quentin. Roger says that she's lucky, it's only him. He laughs as he goes upstairs. 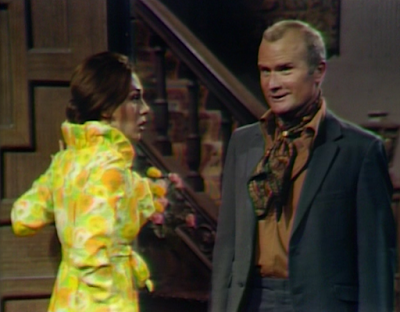 Angelexis says that Maggie was probably reacting to Roger, who would love to tell Quentin what he saw. Bruno asks why everyone lives in fear of Quentin. He says that he's going to call the police, and tells her to try and stop him. He throws her aside and dials the phone. Angelexis smiles as he tells the police he wants to report a murder. 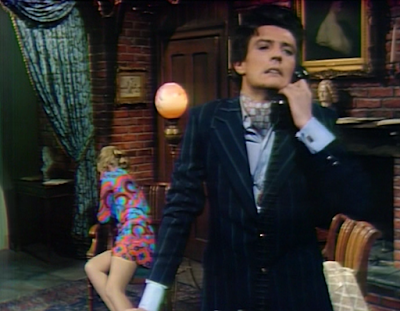 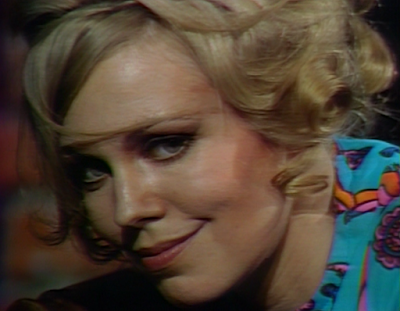 John: Nice how they realized Angelique's son was in her target list, and threw in a line to exclude him from whatever revenge she has planned. Can't fault her for forgetting about him. It seems like it's been weeks since we've seen Daniel.

Christine: Still, you'd think that seeing his family suffering and dying might have a deleterious effect on him. I really wish Julia had grabbed the knife away from Barnabas and stabbed the half-corpse herself. Then they could have taken out Stokes when he showed up and gone back to their own time. I wonder what truly could have caused Barnabas to change his mind... 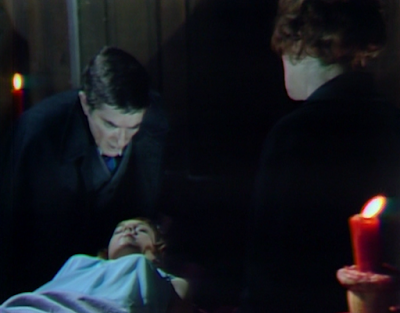 John: Quite a visual clash between Maggie's couch upholstery dress and Angelique's psychedelic outfit. And that's without even bringing up Roger's ascot. 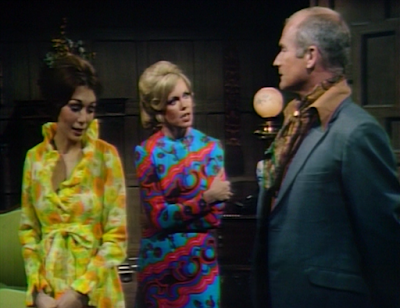 Christine: If viewers in 1970 weren't hallucinating already, that certainly would have induced them! What is Roger talking about when he says one of the servants might tell him where Quentin is? Everyone knows that Hoffman is the only servant on site.

John: Bruno is a strange duck. I don't buy Maggie snuggling up to him without the direct intervention of Angelique's magic. Of course, I don't get why Bruno occasionally takes on his tough guy persona from our time band, particularly when he throws Angelique around. I tell you, things aren't going to end well for that boy!

Christine: Angelique had to be responsible for Maggie flirting with Bruno. Maggie only gets that husky voice when she's under a spell. Also, there is no other explanation for the gag-worthy dialogue, which I have documented below. The best part of the scene was Roger's impish little grin and staccato laughter as he's discovered by Maggie. 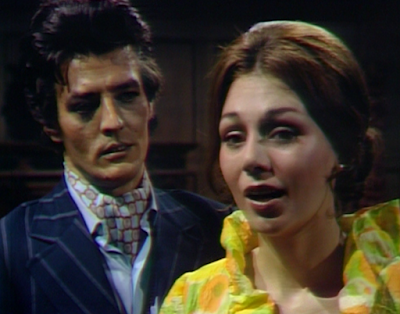 Maggie: Bruno, I heard one of your recordings today. You play brilliantly.
Bruno: Thank you. Just one of my many talents.
Maggie: You're a very self-confident man.
Bruno: Do you mind that?
Maggie: No, not at all. I think I rather envy it.
Bruno: Do you?
Maggie: Oh, I've never had much confidence.
Bruno: All you have to do, is do something well, just once. Then you'll know nothing's really very hard.
Maggie: Yes, you may be right. But then I have no talent.
Bruno: Not even for loving? Oh yes you do. I can see it in your eyes. You not only have a talent, but you have a need for someone who appreciates it.