Angelexis tells Bruno that Maggie was probably reacting to Roger, who would love to tell Quentin what he saw. Bruno asks why everyone lives in fear of Quentin. He says that he's going to call the police, and tells her to try and stop him. He throws her aside and dials the phone. Angelexis smiles as he tells the police he wants to report a murder. 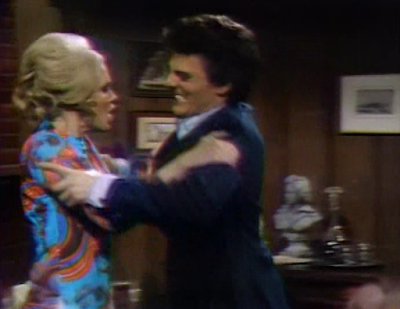 Bruno hangs up and Angelexis asks him if he thinks what he did was wise. He asks her if she wants to find her sister's murderer. She says they'll just ask him questions, but it won't prove anything. She says he wants revenge, not justice, and he agrees. She asks him to fix her a drink. While he does, she takes his handkerchief. They discuss Angelique, and he says that he thinks she admires her as much as the rest of them did, and she says she admired him much more. Quentin returns to Collinwood, and Roger tells him that Bruno made a neighborly call in attempt to make love to Maggie. Quentin asks if he's making it up, and Roger says his imagination is much more modest. He adds that Bruno has threatened Collinwood, so the evening's activities may have only just begun. 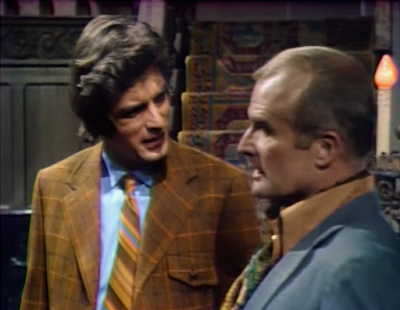 In the cottage, Bruno plays the piano. A police inspector comes to see him. Bruno tells him to wait until he's finished playing the song he wrote. He explains it was written for the late Angelique Collins. He asks if he knew her, and the inspector confirms that everyone did. Bruno says it's her murder he wants to report. The inspector says that was months ago, and Cyrus confirmed the cause of death was a stroke. Bruno hands him the copy of the page from Cyrus' notebook. As he reads it, Bruno returns to playing and asks if he finds it incredible. When the inspector says that he does, Bruno clarifies that he's referring to his music, not the note. 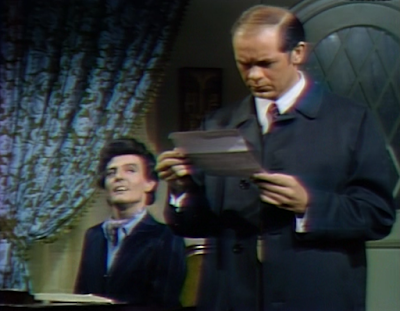 Maggie comes downstairs and finds Quentin in the drawing room. He asks her what happened with Bruno. She says it was a drunken, stupid incident. He asks if Bruno was rude to her. She asks him if he really thinks she indulges in witchcraft. Before he answers, there's a knock at the door. He tells her to answer it. She does, and it's inspector Hamilton to see Quentin. She shows him in. Quentin says he doesn't have time for him, and he insists, saying he has questions about the death of Angelique Collins. He asks Quentin if he wants his attorney present. Quentin says Angelique died of a stroke, and that his best friend, Dr. Longworth, confirmed the cause of death. Hamilton asks if he can identify Cyrus' handwriting, and Quentin says that he can. He confirms the page Hamilton has was written by Cyrus, and is given it to read. He's shocked. Maggie asks what it is. Quentin says Cyrus claims to have lied on the death certificate, and that Angelique was murdered. Roger enters and repeats, "murdered?" Quentin says Cyrus gave the cause of death was a hatpin to the base of the skull. Roger asks if Cyrus identifies the killer, and Quentin says that he did. He says that it says he is responsible. Hamilton asks about the seance. He confirms that Roger was there. 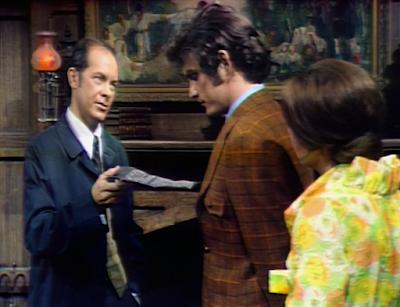 They step into the foyer, leaving Maggie alone with Quentin. She suggests that he call his attorney. He says he doesn't need legal advice if he's innocent. She says she doesn't want anything to happen to him. He suggests that she's suspected him in the past. He opens the doors and tells the inspector that he'll answer any questions he has. 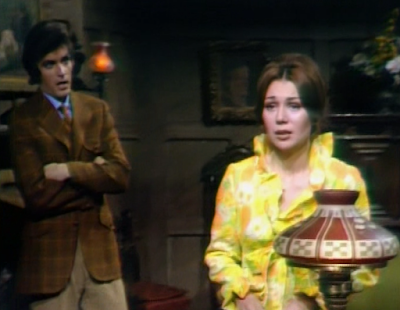 Angelexis comes down and Quentin says the inspector is there to ask about Angelique's death. The inspector says he has some questions for her, and Quentin says she knows nothing about it. Hamilton brandishes the copy and says that she has the original. He asks her to confirm that he's right. She admits that she does have Cyrus' journal. She says she knows none of what's in it is true. Hamilton asks how she arrived at the conclusion, and she talks about how much he loved Angelique. Quentin asks her how she got Cyrus' journal. Hamilton tells Quentin that Bruno called the police and gave him the copy of the page. Angelexis says she bought the journal to keep it a secret. Quentin tells the inspector that he won't answer questions for anyone sent by Bruno. Angelexis says it's all her fault. 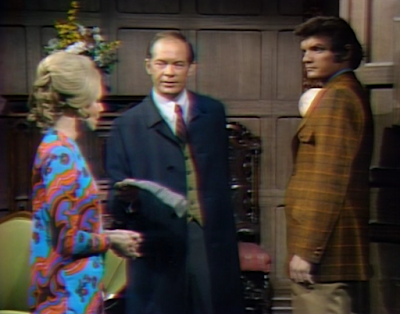 She takes Quentin out of the room and tells him that Bruno isn't worth it. She tells him to answer the inspector's questions. Quentin storms out, headed towards the cottage. She begs him not to go, and smiles after he's gone. 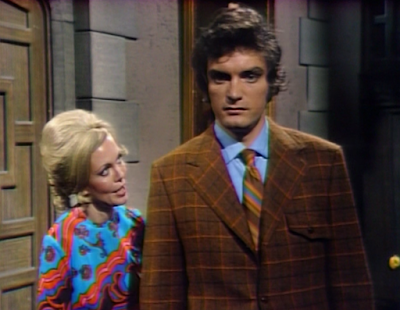 Roger tells the inspector that Quentin has a history with Bruno. They go into the foyer and find Quentin gone. Roger asks the inspector if he thinks Quentin went to see Bruno.

Quentin asks Bruno where he got the journal, and puts him in a choke hold. He tells him he's going to leave the house tonight, and then throws him down, saying he's not worth killing. Bruno suddenly can't breathe. 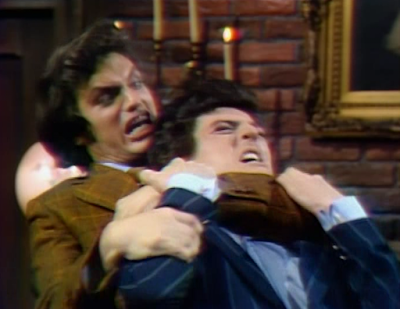 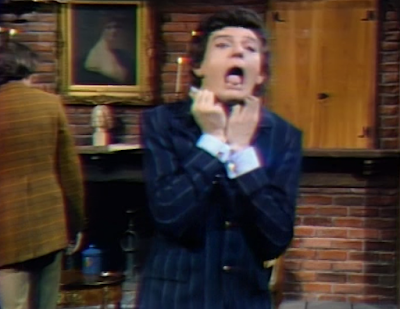 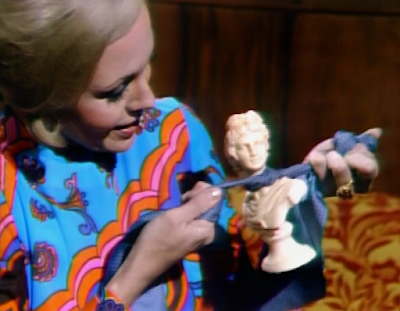 Bruno falls to the ground. Quentin laughs and applauds. When he doesn't get up, he kneels down and shakes him. Hamilton comes in and says that he hopes for Quentin's sake that Bruno isn't dead... 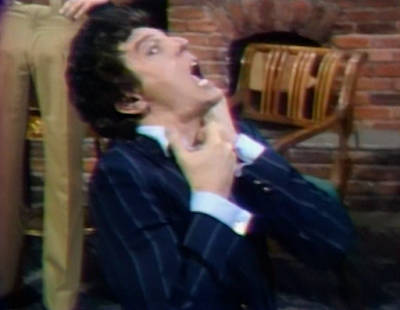 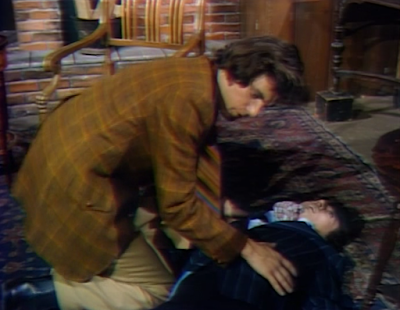 John: What a great back and forth between Roger and Quentin! I love when Quentin asks him if it ever occurred  to him that he wasn't funny, and Roger confirms that it hasn't! Though he's a bit of a jerk (like everyone in this time band), I have to admit I like his performance almost as much as Hoffman's. 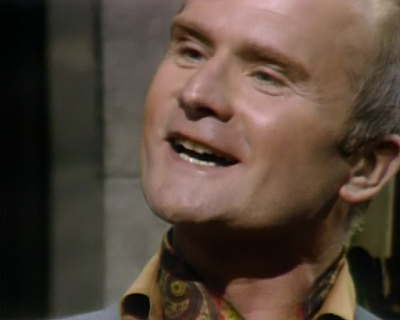 Christine: Parallel Roger is so devilishly entertaining! He acted rather nervous about who was named as Angelique's murderer. Could Roger be the one who used the deadly hat pin on Angelique?

John: I hope the small fact of Angelexis having the real copy of Cyrus' diary doesn't get swept under the rug. Whether she believed it was true or not, I don't think that's going to fly with the inspector. Of course, Collinsport's finest have regularly left a lot to be desired...

Christine: The fact that he kept allowing the person of interest he was interviewing about the murder to leave the room and talk with others lets us know that he's not up on his game.

John: If Angelique really did the job on Bruno, Quentin may spend the rest of this time band behind bars!

Christine: It seemed that was her plan, and we can only assume that since she set Maggie up to look like a witch, he will think that Maggie is the one responsible for making it appear that he murdered Bruno. 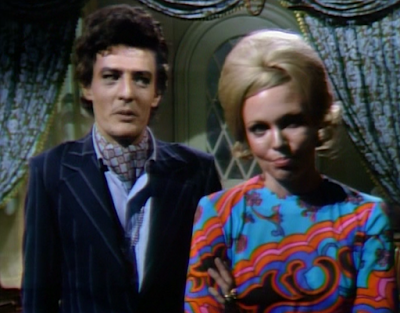