Angelexis returns to Collinwood as Maggie is preparing to leave. She tells Maggie that she can't see Quentin, because she just came from the jail and he was acting like a madman—forcing her to tick the inspector so he could escape. She says she couldn't stop him. Maggie is shocked. Angelexis says he's innocent, and Maggie tells her that she doubts that. She points out that he hated Bruno. She asks Angelexis how Bruno died, and she says he was strangled, but they mustn't believe Quentin did it. Angelexis says if he was able to murder Bruno, then it's also possible that he murdered... and Maggie fills in the blank, saying Angelique. Angelexis says she hopes it isn't true. Maggie says the same. Angelexis tells her to be careful, since no one knows where Quentin is. She says he wouldn't hurt her, and Angelexis says the man she saw in the jail appeared to be capable of killing. 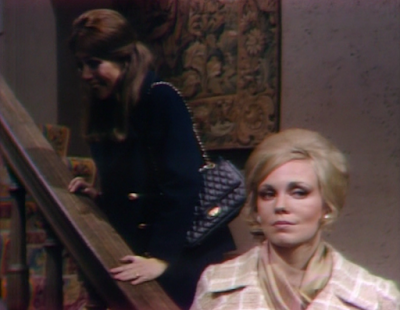 Julia is at the old house when Carolyn arrives. Julia tells her that the police were just there looking for Quentin, as he escaped from jail. Carolyn asks how, and Julia says it was suspicious, as he was alone with Angelique, who says he forced her to trick the inspector so he could escape. Julia says if Angelique helped him, then he's in danger from her. Carolyn asks if anyone knows where he is. Julia says they must find him and persuade him to give himself up. Carolyn suggests he might actually be guilty, and Julia assures her that he is not. Carolyn points out that if Angelique murdered Bruno, there's still another murderer out there. 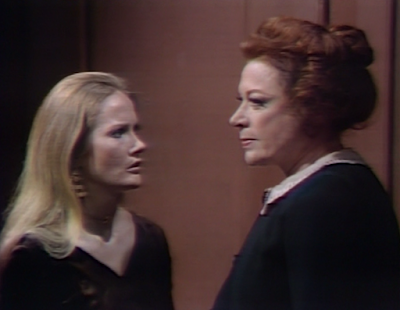 Maggie opens a drawer in her room and finds the Bruno voodoo doll with his handkerchief tied around its neck. She shuts the drawer when there's a knock at her door. It's Carolyn, checking in on her. She opens the drawer and asks Carolyn if she knows what it is. She says it looks like it could be a voodoo doll, and notices Bruno's initials on the ascot. She says it could have been used to kill someone, and asks where she got it. Maggie says she just found it in her drawer. She asks who could have put it there. Carolyn tells her that someone planted it. Maggie asks if it could be Quentin, and Carolyn says no. She suggests it might have been Alexis. Maggie doesn't believe it. Carolyn asks who else it could be. She advises her to treat Alexis with caution. Maggie asks if she knows something that she's not telling her, and Carolyn just reiterates that she should be cautious around Alexis. 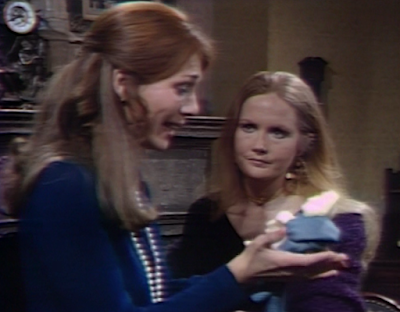 Julia tells Carolyn that Angelique didn't mention where Quentin was. Carolyn tells her that Angelique killed Bruno with a voodoo doll, and planted it in Maggie's drawer. She says she almost told Maggie the truth about Angelique. Julia reminds her that if Angelique finds out that people know her secret, she will destroy them. She says Maggie is safer for now not knowing the truth. She tells Carolyn they need to find out who murdered Angelique so that they can convince Quentin what to do, when they find him. She asks Carolyn who went to Angelique during the confusion of the seance, after Quentin. Carolyn lists off Bruno, Roger, Cyrus, her mother, Buffie Harrington, and Trask. Julia asks who went to her first after she fell, and she says it was her mother. Julia says it could have been any one of them. Carolyn adds that she's convinced she'll never know which one. 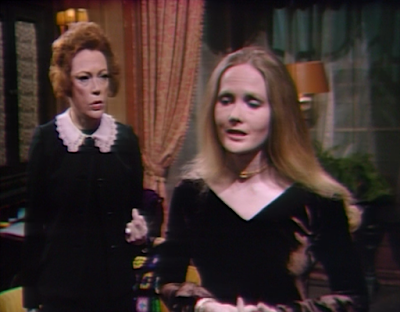 Maggie returns to her room to find the door open. She looks in her drawer and finds the voodoo doll is gone. Angelexis comes in and says she's going for a walk. Maggie asks if she had been in her room earlier. Angelexis says she did not. Maggie then notices that some of Quentin's things are missing, too. Angelexis says that he must be in the house. Maggie says that if he is, she needs to see him. Angelexis says it's not safe, and Maggie suggests she's deliberately trying to frighten her. Maggie apologizes, and says she's confused. Angelexis says if she thinks she'll be alright, she's going to take her walk. Maggie lets her go. Maggie thinks that she ran out of the house once before, and swore she'd never do it again. She decides to go looking for Quentin. 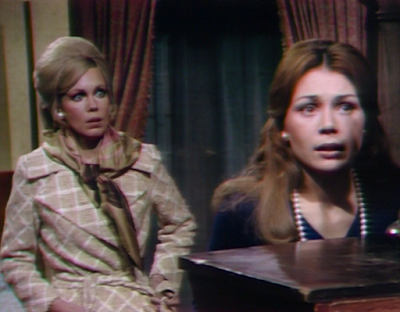 Maggie comes downstairs. She hears shutters banging in the drawing room and goes in and closes them. She returns to the foyer, where the front doors blow open. She shuts them, too. She calls for Quentin. She hears Angelique's music playing. She goes back upstairs. 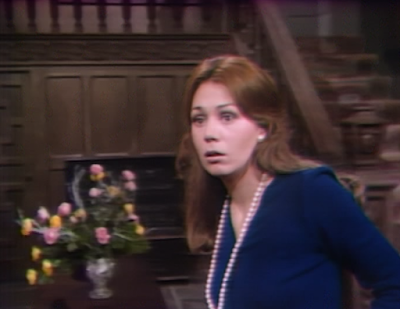 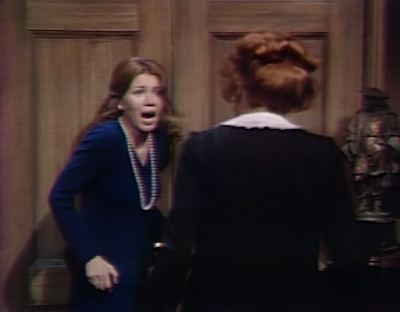 She turns to see that the doors are now open. Maggie assures her they were locked. She says there was someone playing the piano. Julia suggests that she go to stay in the old house with Will and Carolyn for the night, so she won't be alone. Angelexis appears and says she won't be alone—she will stay with  her, and dismisses Julia. 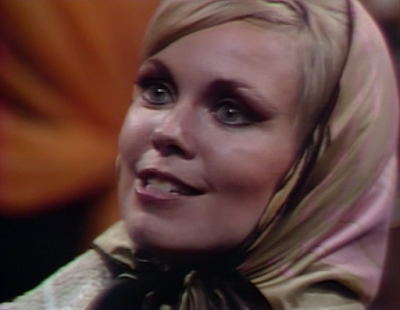 Carolyn is in the old house. She thinks it doesn't matter who killed Angelique. She'd like to put the seance out of her mind completely. Then she realizes that Julia is right, and Quentin must be cleared of both murders. She has a vision of Angelique lying dead on the floor, with her hat pin beside her. She screams. Julia enters and asks her what happened. Carolyn tells her that she knows who killed Angelique. 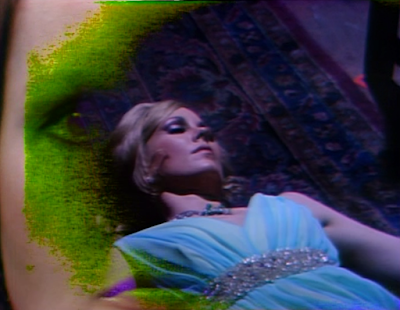 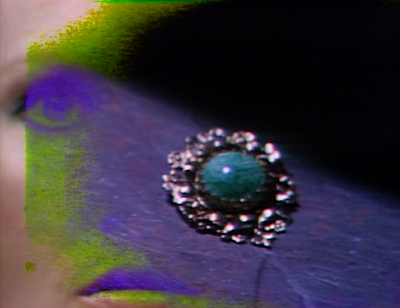 John: What a day for Quentin to have the day off! We don't even get a recap of his brazen escape from the authorities. Of course, what I was really interested in seeing was how Angelique was able to talk her way out of getting arrested for aiding and abetting! 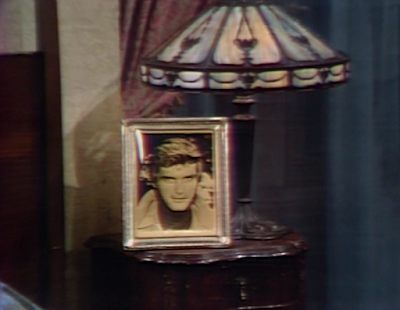 Christine: It seems she got away with batting her eyelashes and saying he made her do it.

John: In classic Dark Shadows fashion, show a character a random prop out of context and they describe exactly what it is, how it was used and by whom! All as if they had read the script beforehand! Carolyn has no trouble recognizing the voodoo doll, spotting Bruno's initials on the ascot, and all but confirming for Maggie that Angelique was responsible. If only she had a way to turn her power of perception onto Angelique's murder.

Christine: You forget that Parallel Collinwood also has a well stocked occult library, so all in the house can stay abreast of witchcraft and other supernatural phenomena that they are apt to encounter.

John: Boom! No sooner said than done. So does parallel-Carolyn have some sort of supernatural power to look into the past, or was that just a stroke of luck that she suddenly remembered who killed Angelique?

Christine: It could be that she's been blocking it out because she didn't want to face the fact that she truly believes her mother is the killer, and only today forced herself to face that reality. 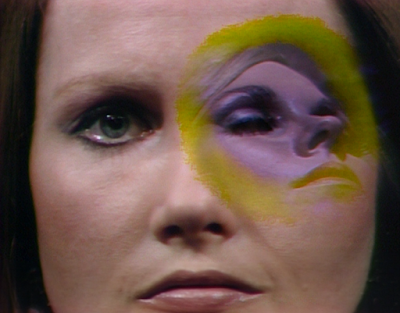