In the East Wing, Barnabas walks into the empty room. He hears Julia calling to him. He turns and finds himself inside the room in parallel time. He sees Julia out the doorway, but she can't get in. He calls to her. She can hear him but he can't hear her. She thinks he may be trapped in parallel time forever. Barnabas wonders how it happened, and what he's going to do now. 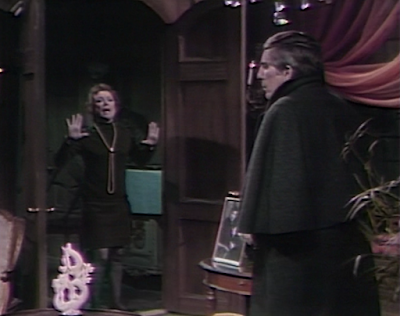 Carolyn asks him who he is, and what he's doing in the room.He recognizes Carolyn, and she asks how he knows her name. He introduces himself as the descendant of Barnabas Collins. He shows her the book, and she asks where he got it. He says it was in the hall. 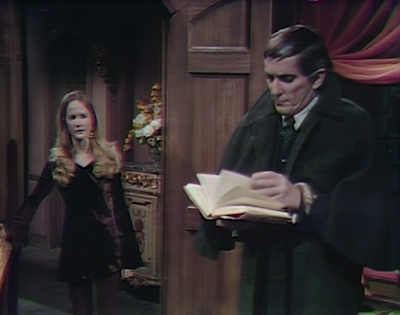 She asks if Julia knows he's there, and he says no one does. He tries to explain, but she says she doesn't trust him. He grabs her and bites her neck as she screams. 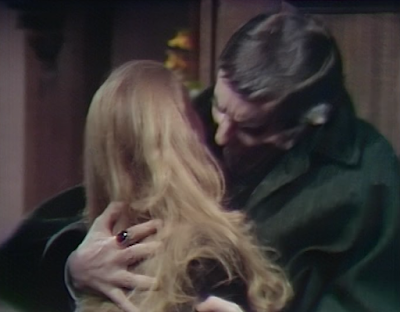 Elizabeth tells Julia that there's no check and it's most embarrassing. Julia says Chris must have overlooked it, and she'll talk to him. She says she lets Roger manage her money because she doesn't have that much anymore, nor any financial sense. Quentin calls and Julia welcomes him back to America. He says they'll arrive that night. Julia tells him it will be good to have him back in Collinwood. Elizabeth says everything will be changed when he arrives. He says it will be odd to have one of the little girls of the neighborhood return as Quentin's wife. She says she hopes he's happy at last. Julia says that he was happy, because he had everything, and he'll never be as happy again. Julia leaves to prepare his room. 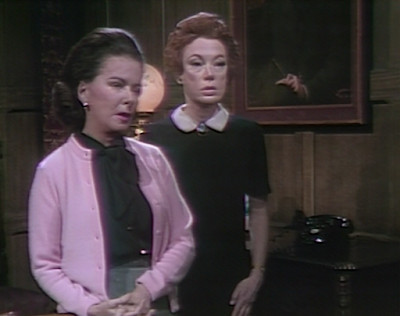 Barnabas apologizes to Carolyn, but explains that he needed her help. He tells her she'll need to find a hiding place for his coffin. He tells her about a room in the basement of the old house, which she calls Loomis house. She says she can tell her husband that they're renting a room to him. They hear Julia coming and Carolyn tells him to hide. Julia tells her that she heard voices, and asked who is there with her. 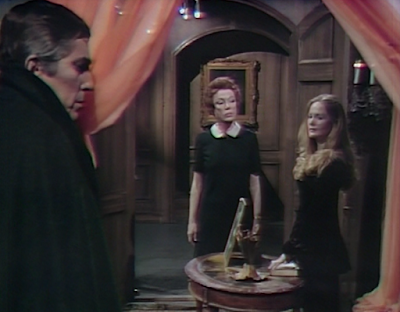 Carolyn tells her that she's alone. She says she was looking for the book, and she found it in the hall, under a chair. She shows her Willie's book. Carolyn sits down, tired, and tells Julia that she'll be there for a few minutes. Julia leaves to open up the suite down the hall, noting that Mr. Collins is arriving tonight. Barnabas comes out and Carolyn tells him to leave. He tears the inscription out of the book, and asks her who Quentin married. Carolyn says it's a girl from town they don't know named Maggie Evans. 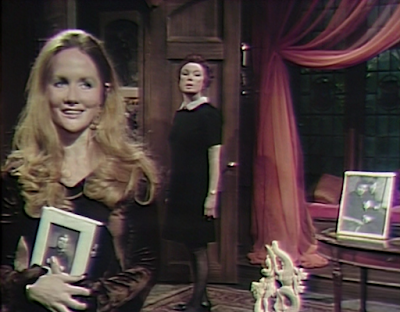 Maggie asks Quentin what he's thinking about. He says that perhaps they should have stayed away longer. She asks if he hates the house because of Angeique. He gets up, noticeably upset. She apologizes. She says she's well suited to manage a house, and he tells her that Mrs. Hoffman is well equipped to do that. He tells her that he loves her, and they kiss. 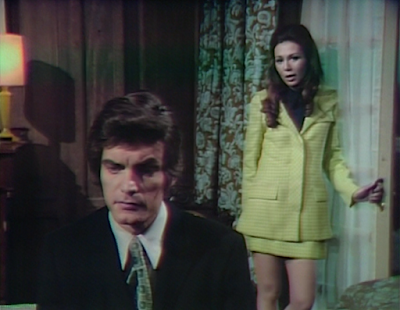 Barnabas and Carolyn go downstairs in the Loomis house where his coffin will be hidden. He tells her they just need to find a coffin. She asks how he knows so much, and he goes on to explain parallel time to her. He says he came to her time to escape who he was—but he failed. 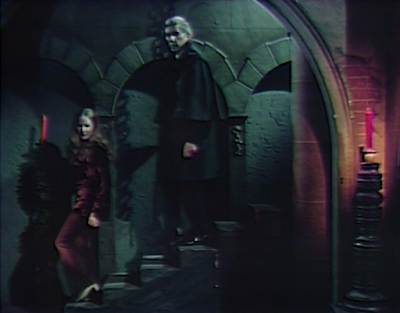 He tells her that where he came from, she was an heiress to Collinwood. She says she'd like that time, and he tells her that she wouldn't, because her husband was killed. He asks Carolyn how Julia came to Collinwood, and Carolyn says she arrived with Angelique. Carolyn adds Angelique always wanted to marry Quentin since she was a child, and that Angelique's father, Tim Stokes, raised her at Collinwood. 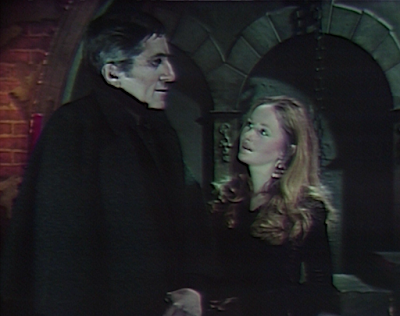 Barnabas finds the story so similar, and yet different. Carolyn realizes that he meant what he said about parallel time, and decides she doesn't want to think about it. He asks if she liked Angelique, and based on her response, realizes that there was no love lost between them. 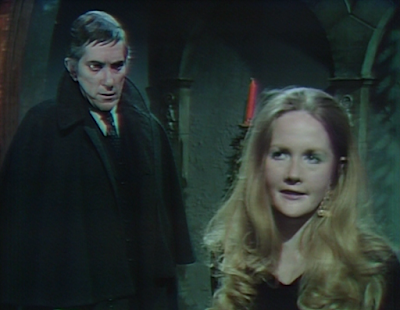 Julia talks to Angelique's portrait, and says that even Quentin must know that there will only ever be one mistress of Collinwood. 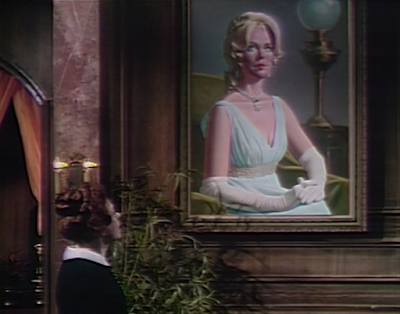 Maggie tells Quentin that as a child, she always dreamed of coming to Collinwood. He tells her that it's now all hers.

Julia prepared a meal in the drawing room, and Elizabeth asks her if she made all of Angelique's favorites. 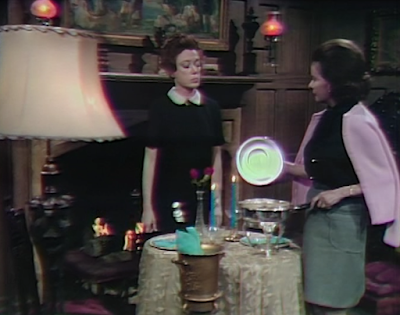 Maggie reminds Quentin that he is to carry her across the threshold, and he sweeps her off her feet and brings her inside. Elizabeth welcomes them, and Quentin introduces her as his cousin. Quentin asks how Julia is, and after she welcomes him back, he introduces her to Maggie. Julia explains that dinner is ready by the fire. Quentin angrily asks why she did that. Maggie doesn't understand his reaction, and he tells Julia that it will be fine this time. Maggie tells Quentin how happy she is as she checks out the spread. Quentin asks Julia if she did it deliberately. He storms out of the house, and Julia feigns ignorance as to why. She tells Maggie that returning to Collinwood has apparently upset him. 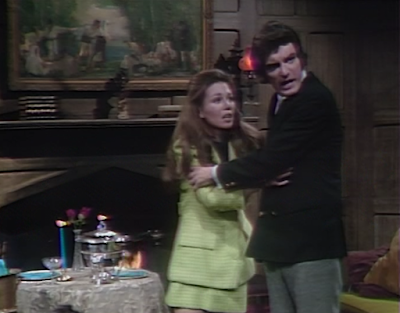 Maggie waits in the drawing room for Quentin to return, wondering where he went, and why. A letter is slipped under the door, which Maggie sees and picks up. She opens the doors but there's no one in the foyer. She reads the note, which says she will never be welcome there, and is signed by Angelique. 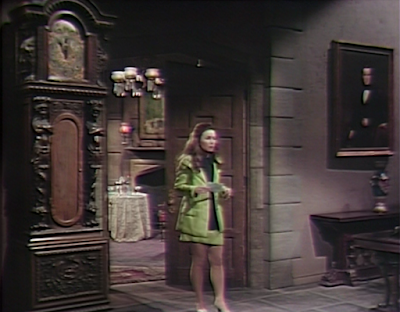 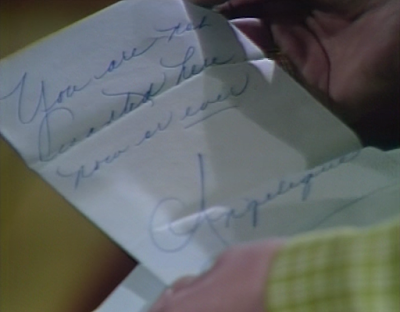 John: Sadly, I cannot help but think the writers pursued the parallel time storyline out of boredom rather than some specific dramatic purpose. I guess time travel wasn't enough of a change to keep things interesting for the actors. Hopefully they'll prove me wrong before this is through.

Christine: I don't know if the writers were bored or just straining for new ideas for the show. Time travel to the past has already been done, so parallel time travel is quite a novel idea. Personally, I like seeing the actors challenge themselves to convince us that they have entirely different present day personalities.

John: So Barnabas got part of his wish, crossing the time band, but he didn't shed the vampire curse. So what's the first thing he does? He says he's a relation, bites Carolyn, and tells her about parallel time. Really? Just had to get that off his chest right off the bat? You'd think they could have at least gone coffin shopping first.

Christine: Barnabas has bitten every one of Carolyn's incarnations. He is obsessed with her neck. He's like a creepy old vampire uncle.

John: So I was right about Maggie being Quentin's bride, but I never would have guessed that Julia was 'the help.' And not just the help. Clearly she's still devoted to Angelique, and is not going to make life for Quentin or Maggie comfortable in Collinwood, by the look of things.

Christine: Quentin has some serious anger issues, but it seems that everyone at Collinwood is pretty cantankerous. How long before Angelique shows up and proves she's not really dead?
Posted by John Scoleri at 6:00 AM