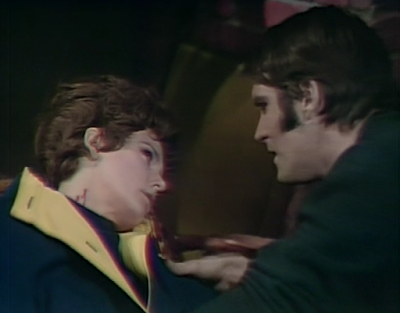 Barnabas feels bad about having bitten Sabrina, and decides not to leave the house again until his insane urge ends. He doesn't see Jeb in a chair. When he goes to light a candle, Jeb asks him not to, and points to the shadow on the wall, saying that it will kill him. Barnabas asked who did it, and Jeb explains that it was Angelique. 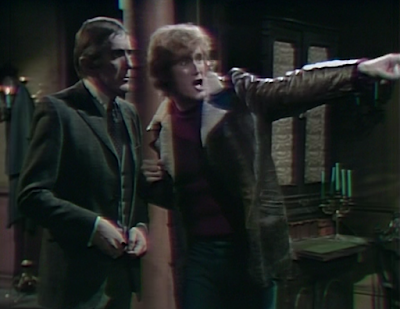 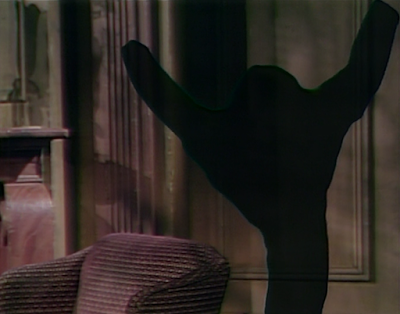 Blair tells Angelique that she looks charming in black. She asks him if he's in mourning, about Bruno, Megan and Philip. She asks if his master will be disappointed that his plan has collapsed. He assures her that as long as he has a loyal servant, her husband, his plan hasn't collapsed. He tells her that he never even thanked her for her help with Jeb. He says the shadow was a stroke of genius. He says she always knows the perfect revenge. She says that he follows patterns, too. She asks if he'll be recommitted to the underworld. He says that at least now that she's human, she can't go to his master to tell him that he has failed. She assures him that she has her powers, and he says she's right back where she was 200 years ago—loving Barnabas Collins. He assures her that he is not finished yet. 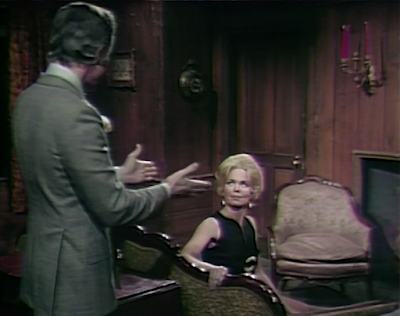 Chris shows Quentin the marks on Sabrina's neck. Chris realizes that Quentin knows what happened to her. Quentin asks how he would know, and Chris says he changed when he mentioned the marks. Quentin asks if Sabrina told him anything. He tells him to wait with her, and as long as he's with her, whatever happened won't happen again. 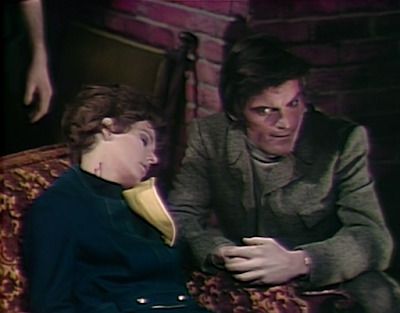 Jeb tries to convince Barnabas that he loves Carolyn, and asks him to go to Angelique. He tells Jeb that she doesn't grant favors. Quentin arrives to see Barnabas. Barnabas tells Jeb to leave them, and that he'll see Angelique tonight. 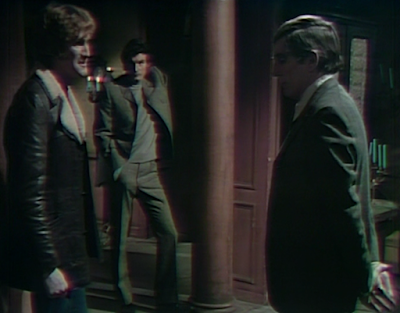 He tells Quentin that Angelique has put a curse on Jeb. Quentin tells him that he saw Sabrina. Barnabas says he hates himself, but she came to him and he couldn't stop himself. Quentin asks him to promise him, and Barnabas explains that Julia's injections have failed. He says if he had a gun and silver bullets, he'd ask him to kill him now. Quentin says that he can't just kill Sabrina. He adds that he understands what it's like to be under the power of some force. Barnabas agrees that he must stop, and asks Quentin to stay with him. He says that they must see Angelique, for Carolyn's sake. He says if Quentin stays, it will be less likely that he and Angelique quarrel. He calls to her, asking her to come to him. 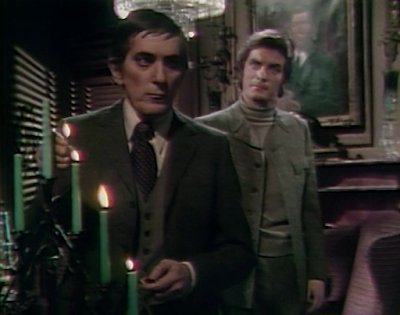 Chris goes to call another doctor, and Sabrina tells him not to, saying that Julia is a friend. Chris asks her again what happened to her tonight. 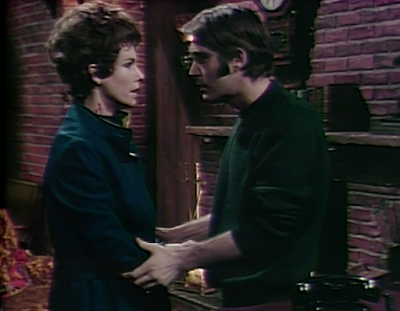 Angelique is pleased that Barnabas is asking for help on Carolyn's behalf, and not his own. She asks why Carolyn should have love. He says that Jeb is not responsible for Sky, and that Blair is. She agrees to meet Jeb, and tells them to bring him to her. 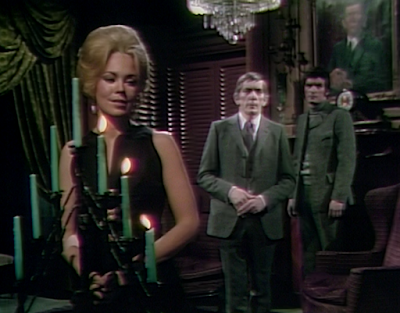 Barnabas takes Quentin to the East Wing. Quentin opens the door and sees the room in parallel time. He see's his photo with David. He tries to enter the room, but is unable. Barnabas tells him to watch and wait. They see Jeb enter the room and look around. He finds an address book and begins to read it. Chris comes in and refers to him as a doctor, asking if he's looking for something. He says he found her address book. He says that before she died, she gave him the name of a chemist in Boston. Chris accuses him of lying. He says no one is to take anything from the room without Julia's permission Jeb gives him back the book and leaves. Chris closes the door. Quentin asks Barnabas what's going on. Barnabas opens the door again on an empty room. Quentin finds it incredible. Barnabas explains that he has just witnessed parallel time. 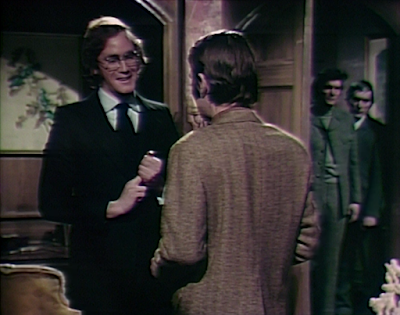 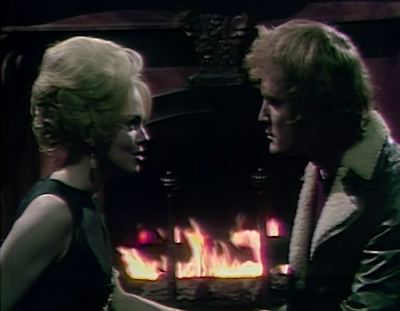 Chris tells Sabrina he's going to the hospital to get Julia, and tells her not to let anyone in. 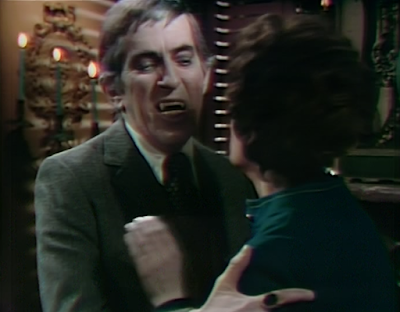 Blair realizes that if he had all of his powers, there would be no Angelique to taunt him. Jeb arrives at Blair's house with the shadow cut-out. Blair says he hoped they would not meet again. Jeb tells him that they must talk—perhaps for the last time. 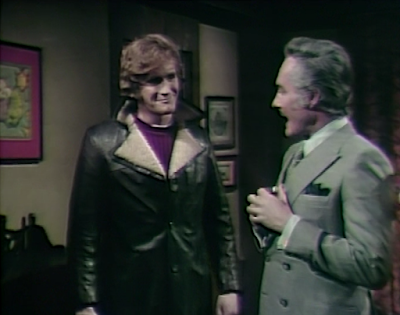 John: I'm sorry, all Jeb has to do is grab some Elmer's Glue and attach the construction paper cut-out shadow to someone else's heart and he'll be rid of the curse? Talk about a grade school curse!

Christine: It does remind me of Flat Stanley (as well as Flat Zanti). Don't be surprised if you get a Shadow cutout in the mail one of these days. I hope we get to see Jeb chase Nicholas Blair around the house with it as he tries to play pin the Shadow on the bad man.

John: It's amusing that in order to continue to push the parallel time story forward, they take these odd, random asides that are completely separate from the other storylines that are underway. Considering what's going on with Jeb, Angelique, Blair, Barnabas and Sabrina, was today really the right time to force that whole notion on to Quentin?

Christine: Well, they had to stay busy while Angelique had the strange and intimate fireplace chat with Jeb. I noticed that Barnabas chomped down on the other side of Sabrina's neck today. I wonder if it's because she hadn't bothered to clean up his first mess. Will she vamp out with the second bite, or do you think the third time's the charm is still the rule?

John: Parallel Jeb has a very different hairstyle than Leviathan Jeb, and between that and the glasses, he immediately comes across as nerdy Jeb instead of too cool for school Jeb. 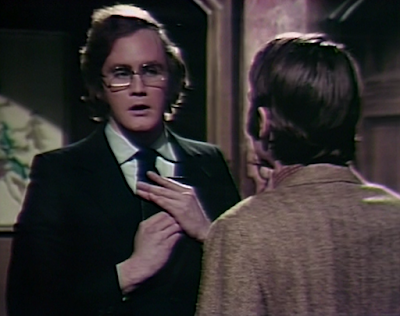