Carolyn goes to the carriage house and begs Jeb to tell her what's wrong. She screams. She sees the dancing shadow. He comforts her and says he didn't want her to see it, ever. She asks if it's going to kill him. She says they'll get away from it, and drags him outside. 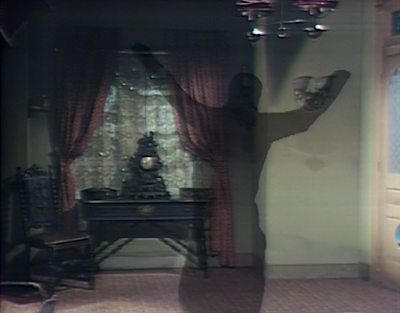 Back in Collinwood, Carolyn holds the paper cut out and says that it began with this. Jeb explains that it follows him everywhere, and it's going to kill him. He tells her that he saw his death from it in a vision. 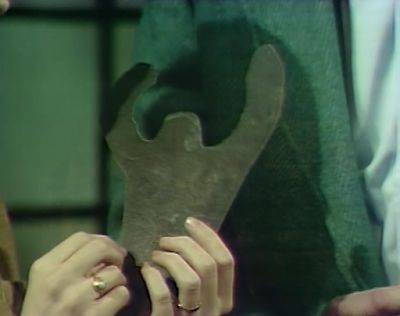 She says whoever did it to him must remove it completely. She asks if it was Blair. Jeb asks why he suspects Blair, and she says he's evil. He says she knows too much, and he'll take care of it. She asks him if he loves her, and he tells her that he does. 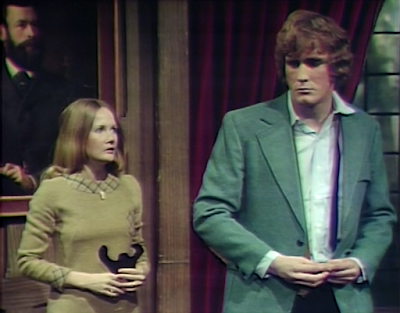 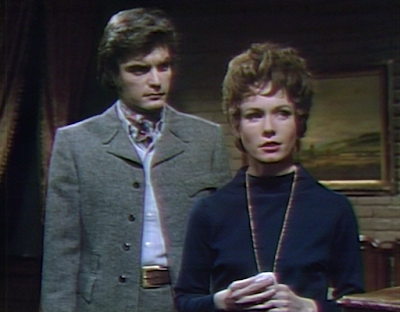 She says Bruno will be waiting for him. Quentin agrees. She says she wishes that Chris had killed Bruno, and Quentin explains that everyone he kills weighs on him. Sabrina says she's going to offer Bruno money to go away. She says she wants to marry Chris, and Quentin says she can't even consider that until the curse is over. Quentin offers to go with her to see Bruno. 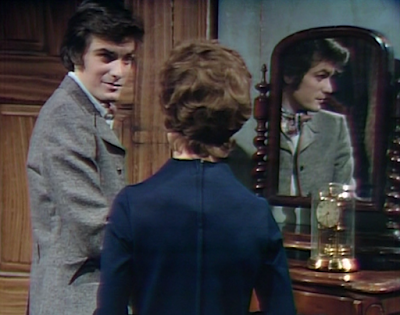 Bruno carves an apple with a knife when Jeb comes to see him. Bruno asks what he wants, and threatens Jeb with the knife. Jeb says the knife can't hurt him, and Bruno puts it down. He tells Jeb that he knows that he's already dead; it's just a matter of time. Jeb says he knows that things are different between them. Bruno says Jeb destroyed everything for them. Jeb asks Bruno to speak to Nicholas. He says that Angelique put a shadow on him that's going to kill him. He adds that he knows Blair has powers, too. Bruno says he doesn't understand how much he hurt Blair, and all of them. Jeb says he did it all for Carolyn. Bruno says he might make a play for her when Jeb is dead. Jeb grabs him and Bruno reminds him that he wants his help. He agrees to tell Blair what Angelique is doing, but he says it won't do any good. He says that Blair probably could help him, but it won't matter because Jeb's existence is diminishing. Jeb tells him that he can live, and he will. 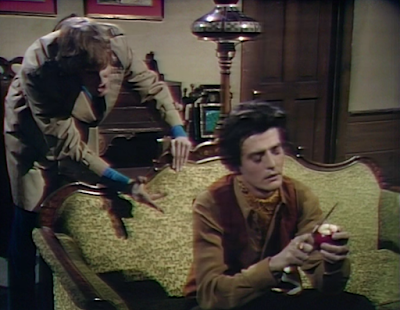 Carolyn fixes herself a drink when Maggie comes in and asks her about married life. She says it's alright, and Maggie asks her if something is wrong. She asks her why she's drinking in the afternoon, and Carolyn offers her a celebratory drink. Maggie declines, and Jeb walks in. She congratulates him, and goes upstairs to dress for dinner with Barnabas. Carolyn asks if he saw Blair, and he says he didn't, and Blair wouldn't lift a finger to help him anyway. He asks how long it will be until she's a young widow. He notices that it's beginning to get dark, and wonders how much larger the shadow will be tonight. 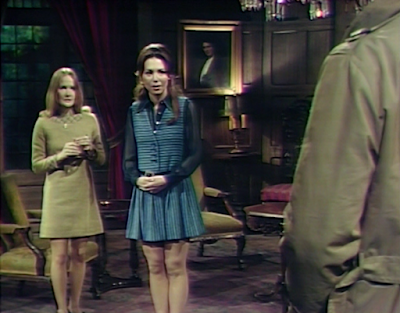 Maggie comes downstairs and notices the trident on her hand. She wonders where Quentin is. 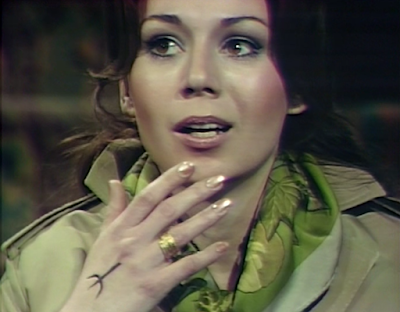 Quentin arrives to see Sabrina, and notices the trident on his hand. He thinks he should be with Maggie, and turns away before going in. 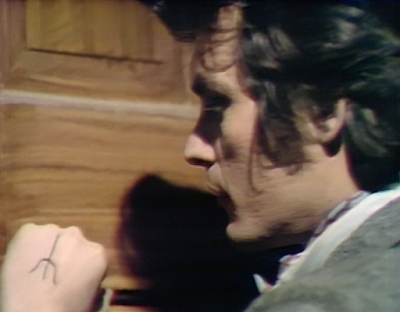 Sabrina wonders if Quentin has changed his mind about going with her to see Bruno. She decides that she'll deal with him alone if she has to. But she thinks that she won't be completely alone. She takes a revolver from a drawer and says it will go with her. 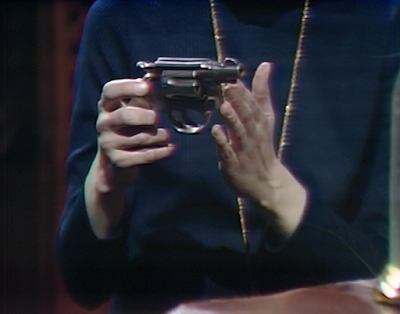 Later, Sabrina decides that Quentin has changed his mind. She wonders if Bruno will choose the money or death. She then thinks she'll never be able to use the gun, but decides she must, for Chris' sake. She leaves. 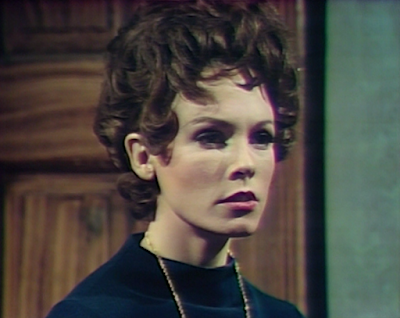 Quentin and Maggie make out by the fountain. She says Barnabas is waiting, and he tells her that nobody else matters. 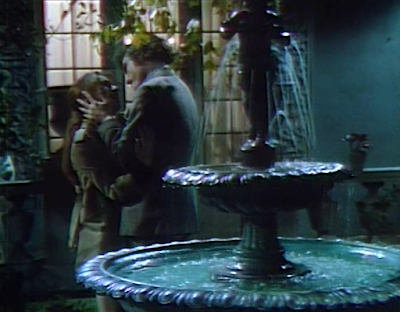 Jeb sees the shadow, and tells Carolyn to turn the light off. She says that Barnabas may be able to help him, and Jeb says he's no friend of his. She suggests going to Professor Stokes. He refuses. She doesn't understand why he's unwilling to try anything. 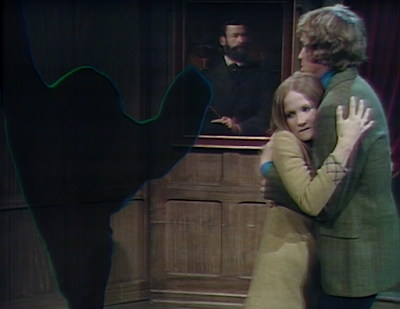 Bruno is putting on his fur coat when there's a knock at the door. He's surprised to see Sabrina. He invites her in. She begs Bruno to leave Chris alone. He tells her that she's appealing, but it's not enough. She hands him a wad of cash and asks if that's enough. She tells him to leave and forget about Chris. He tells her that it's not enough, and she says she'll get more. He says whoever controls Chris controls a great power, and right now that's him. He hands her back the money, and she pulls the revolver on him. He asks what she intends to do. She says she's not going to let anyone hurt Chris, and she's going to kill him. 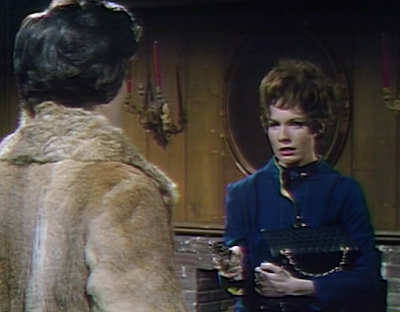 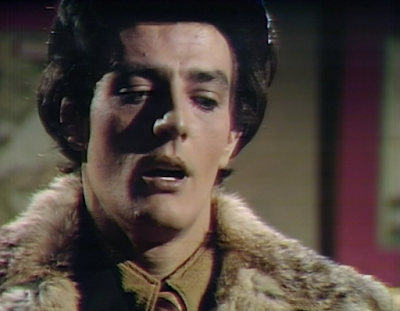 John: I didn't realize that Jeb still had the construction paper shadow puppet. Wouldn't you at least try destroying that, in the hopes that it might make the shadow dancer go away?

Christine: It is odd that he hasn't attempted to destroy it, and that he's still hanging on to it. It's even stranger that he doesn't seem to mind Carolyn pressing it to him as they embrace. 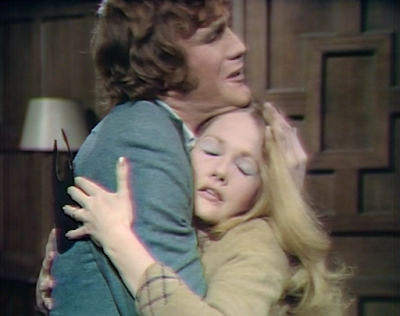 John: For a minute today, I thought Nancy Barrett might have accidentally grabbed Louis Edmunds' script, when she waltzed into the drawing room and poured herself a drink. Remind me again how old she is? To be fair, it seems reasonable to assume that anyone willing to marry Jeb would rely on self-medicating.

Christine: I thought she was 18 or 19 at the beginning of the show, since Liz had sequestered herself away at Collinwood for 18 years after Paul Stoddard deserted them when Carolyn was an infant, though in Episode 267, her birthdate was recorded in the Collins family history book as July 16, 1946. Either way, she should be of legal drinking age by now, not that that's stopped her in the past.

John: While werewolves were a Dark Shadows trademark, Sabrina's confrontation of Bruno could have been cut and pasted from any soap opera ever aired (and a similar scene has surely played out in almost every soap opera before and since!). That said, it is always fun to get another opportunity to see when Bruno drops his tough-guy act.

Christine: I might not expect Sabrina to be able to pull the trigger, except it wasn't long ago she was still gray haired and babbling, so there's no telling what harm she could inflict on Bruno. If it follows typical soap opera fashion, though, he'll easily disarm her.