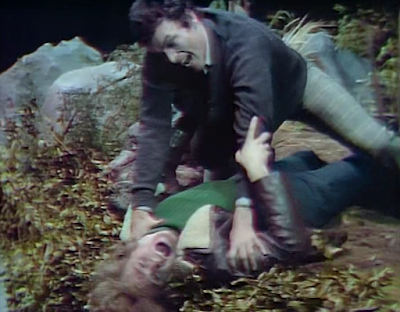 Jeb arrives at Widow's Hill looking for Carolyn, but finds Philip instead. Philip says Jeb is just where he was told he would be when he was let out of jail. They struggle, and end up with Jeb hanging precariously over the edge of Widow's Hill. Philip tells him that he is going to drown. Jeb manages to get free of him, and tells Philip to get up. Jeb says he's killed enough, and is going to let Philip go. Philip runs off, but then creeps back and as Jeb steps aside, Philip goes flying over the cliff. Jeb is shocked. 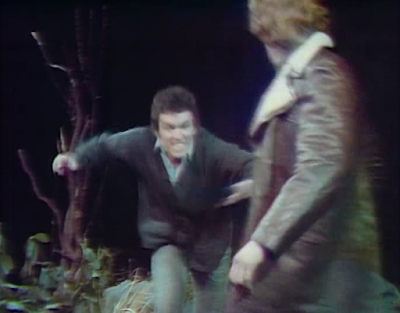 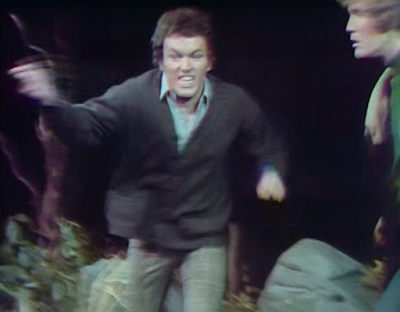 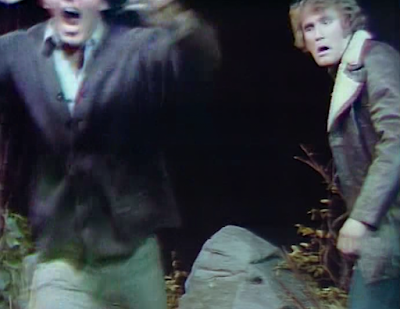 Peter appears and says that Jeb won't escape him. Jeb walks away from him, and Peter reiterates that he will destroy him. 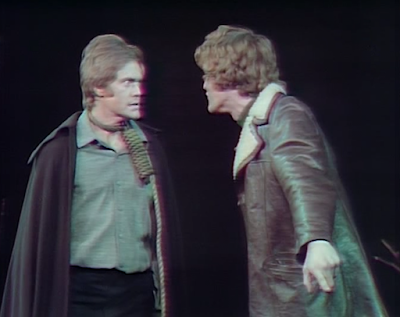 Angelique appears and tell Peter that she will not destroy Jeb, as he belongs to her. Peter asks what Jeb did to her. She says she lost her husband due to Jeb, and she will destroy him. Peter says he can drown him as he did once before, the only way he can be killed. Angelique assures him that she has ways of killing him. Peter says if she fails he'll marry Carolyn. She says she won't fail. She says she'll go for Jeb as soon as she sends Peter back to his grave. She tells him to go back into the darkness, and Peter fades away... 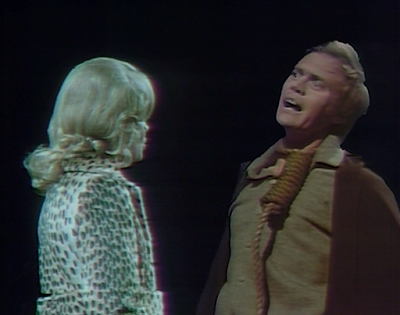 Elizabeth reads Carolyn's letter to her explaining that she's running off with Jeb. Carolyn comes in and tells her she can't change her mind. She says she went to the carriage house looking for Jeb, but couldn't find him. Elizabeth says Jeb doesn't love her, but Carolyn says that he does. The phone rings, and she answers it. It's the sheriff calling for Megan. They learn of Philip's escape from jail. She tells her mother they don't even know where to look for him. Jeb steps in and tells her they can look in the water near Widows' Hill. 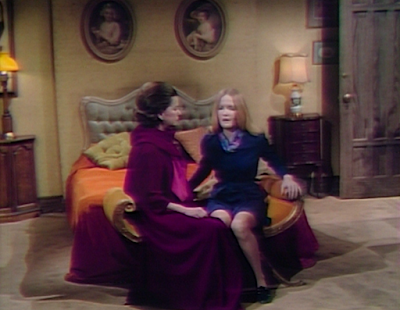 Jeb explains what happened to Philip in a call with the sheriff. He hangs up, and he says they told him Philip had a nervous breakdown earlier, and he escaped when a doctor came to see him. He says they said his periods of madness came during his times of need to kill. Carolyn tells him that she was afraid of losing him. Elizabeth tells Jeb that she doesn't approve of the marriage, but she doesn't want to lose Carolyn. She asks them to stay and get married in Collinwood. Carolyn asks her mother to give them some time alone. Jeb says he doesn't want a big Collins wedding. Carolyn says they can still have a small wedding with just the family. Jeb say no family, and no one is to know about it until it's done. 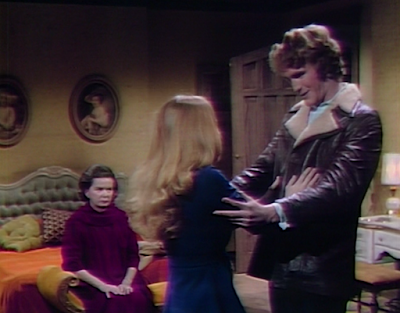 Elizabeth and Angelique have tea in the drawing room when Jeb comes in. Elizabeth tells him that she took care of the marriage license. She then introduces Jeb to Angelique Rumson. Angelique points out that Jeb was a good friend of her husband. Jeb admits to knowing him, but denies they are good friends. Angelique asks Jeb if he's planning to marry Carolyn. He says he is, today. 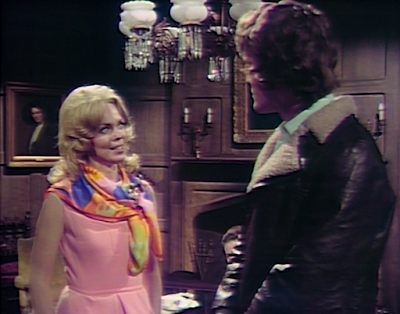 Jeb returns to the carriage house to find Angelique waiting for him. She asks him what he knows about her. He says that she's Sky's wife, and she's very beautiful. She says she knows about him. She says he should have been destroyed when the box was destroyed, the cairn blew up, and the room was burned. She says his will to live is no match for her. She says she knew how Peter Bradford planned to kill him. She adds that she has the means to destroy him in the room. 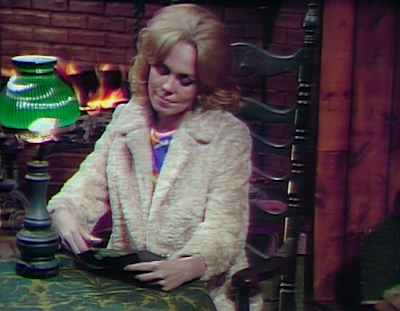 Elizabeth brings Carolyn an old pin to wear, and gives her a hanky. Carolyn thanks her for accepting Jeb, realizing that she actually hasn't accepted him. She assures her mother that it's all going to work out. Elizabeth laments that she's not having a big wedding. 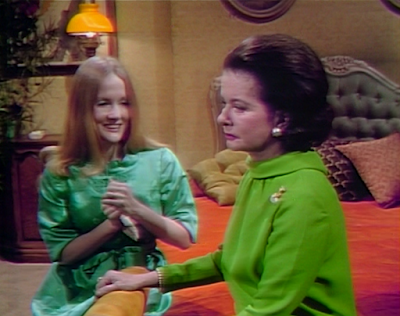 Jeb says that he didn't ruin Angelique's marriage. She tells him to go, and then puts a cut out piece of construction paper on him, telling him that it will follow him everywhere. She tells him to come to the fire so that she can show him what is going to happen. He does, reluctantly, and looks into the fire. He describes what he sees. 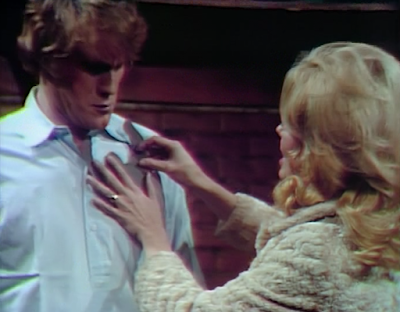 Jeb is asleep on a bed. He awakens, and sees a ghostly shadow in the shape of the construction paper Angelique put on him. He screams. 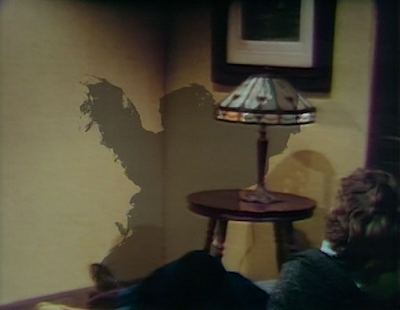 Angelique asks him if he wants to see more. He says he saw the shape, and puts down the construction paper. She says that death waits for him around every corner—not just on Widows' Hill, and it will follow him everywhere he goes. 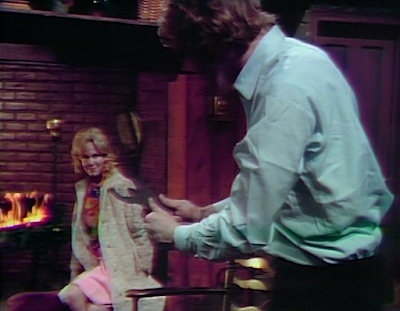 Elizabeth gives Carolyn a sapphire bracelet so that she has something blue to be a traditional bride. 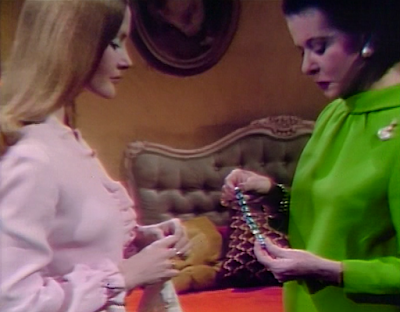 Jeb waits downstairs for Carolyn. He admires himself in the mirror, and sees the spooky shadow behind him. He turns on a light and the shadow goes away. 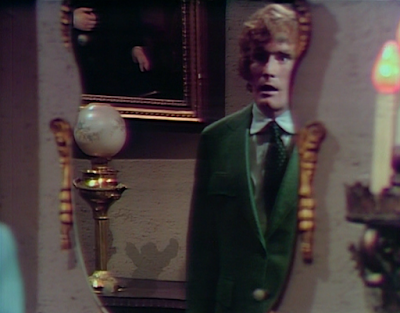 Carolyn comes downstairs and hugs him. They start for the drawing room when there's a knock at the door. Elizabeth answers it, and as she lets the reverend in, Jeb sees the shadow once more. 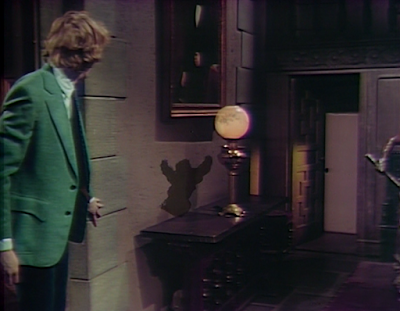 John: Philip's leap off of Widow's Hill was comical. What was particularly great was that he made no effort to grab Jeb as he sailed over the cliff with a dumbfounded look on his face.

Christine: That was hilarious! I think it was the way he was flailing his arms around as he ran straight off the cliff that made it such an enjoyable moment. What a way to go! Here it is for your enjoyment:


John: So Jeb will be brought down by the shadow of a creepy cut-out? If that's supposed to be death, it's far less frightening than one might expect. Perhaps they've forgotten that we've already met death, and he's a nicely dressed man.

Christine: It made me think of a golem. I wonder if it will remain a terrifying shadow, or if it will eventually take on form. Angelique seems to be having a bit of fun, knowing that Jeb is a big wuss and can easily be scared by a piece of paper and the power of suggestion. 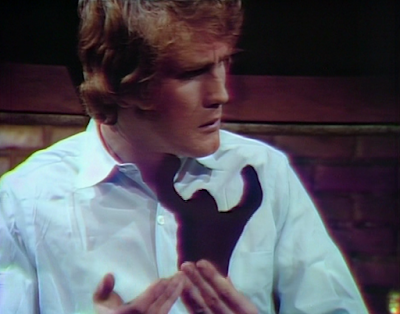 John: I guess we should thank Angelique for making Peter Bradford's stay in 1970 a brief one. That said, she did manage to pull the rug out from under what was otherwise a huge build-up that amounted to very little. In terms of old familiar faces popping up, is anyone else hoping that a descendant of reverend Trask will show up to officiate the ceremony?

Christine: It would seem that anything goes at this point. I wouldn't be surprised if Burke Devlin showed up at Collinwood, claiming he survived the plane crash in Brazil, only to find out that Vicki took a flying leap off Widows' Hill in 1797.