Julia tells Barnabas that she's never been in the East Wing. He says he saw her, and it's insane, but he's not mad. He asks her to believe him. He says that he was looking for Megan's coffin and he came across a room that a strange force kept him from entering. He says he saw a picture of Quentin and David, inscribed by Quentin to his wife. He says Elizabeth then came in, and started to take out dresses until Julia came in and told her to stop. He says they argued about the woman being dead, and Julia saying that she would be back. Barnabas says that all of them may be leading a different life in that room. Julia asks him to take her to it. 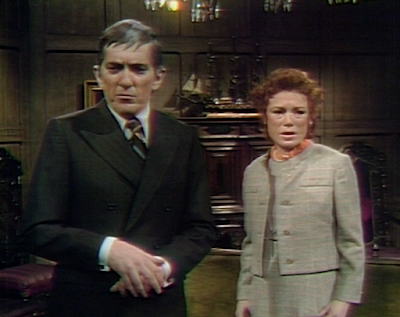 Elizabeth comes in with a pattern to show Julia. She then adds that she has to send announcements regarding Jeb and Carolyn. He and Julia leave, and Julia asks if they should tell Elizabeth. He tells her that she's had enough for one day, and they go upstairs together. 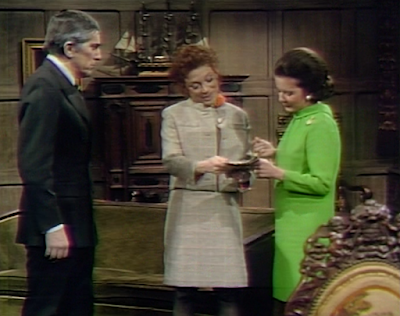 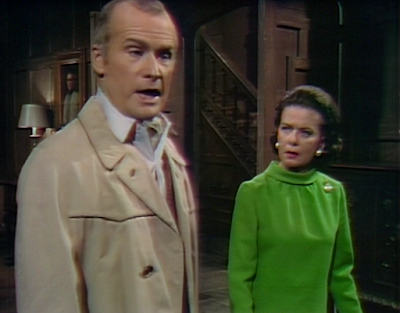 Barnabas leads Julia to the door in the East Wing, and opens it. The room is empty. Barnabas describes how the room was decorated. They then hear banging around. A window bangs behind them. Barnabas reiterates that he wasn't watching a scene from the past—it appeared to be happening now. Julia says that she had a discussion with Stokes about his theory about parallel time. She describes a scenario that would explain what Barnabas saw in the room. After describing it, she asks him if he thinks he actually saw them in a parallel time. 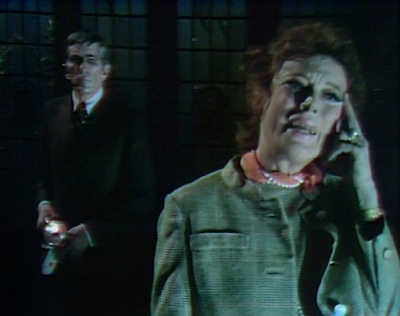 They hear something behind a door, and when Barnabas opens it, they find Megan. He tells her that he knows her coffin is in this wing, and leads her out. Julia asks her if she's been in the room where Barnabas saw the parallel time, and she says now. He asks if she has heard any voices from the room. They offer to help her, by Julia giving her injections. She says no. He tells her that she'll be found out, and she says that she doesn't want to be any different than she is. She says she has nothing to go back to. Megan then disappears. 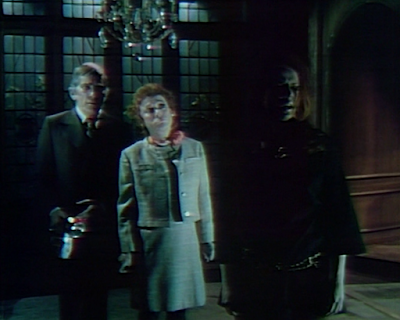 In the old house, Roger asks Willie where Barnabas is, and says that he must see him tonight about Carolyn. Willie isn't aware of what happened to her. Outside the window, Megan watches them. Roger leaves. 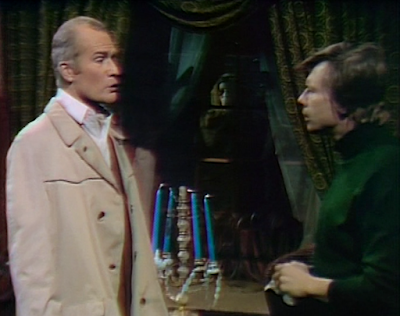 On the path back to Collinwood, Roger hears a rustling. Megan appears and he offers to walk her back to Collinwood. He tells her that he's sorry to have heard about Philip. She tells him that she's cold, and he offers his coat. She politely declines it. He apologizes if he upset her. She hugs him, and then leans in to bite his neck. 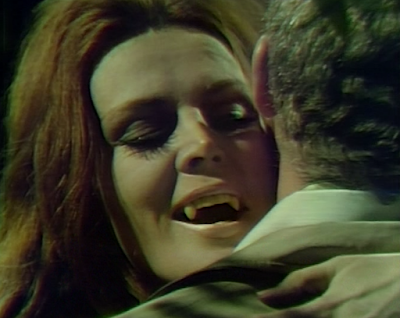 Julia tells Barnabas that he shouldn't feel personally about Megan. Roger comes in and says he was looking for them, but he can't remember why. Julia asks if he's alright. He says the light is so bright. He says he must find Elizabeth, and then says he just ran into Megan. Julia asks to give him something for his headache, and he refuses. He heads upstairs, and Julia says they must help him. He says they must stop Megan. She says she won't take the injections, and he says they must stop her with a stake and a hammer. 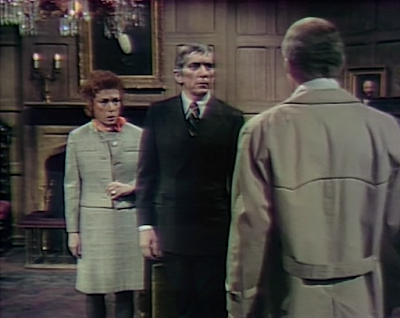 Willie asks why he has to do it. He says he doesn't want to drive a stake through Megan's heart. Barnabas says it's not a pleasant task, but it has to be done. He asks if Julia can do it. She offers to go with him, and Barnabas says she's not strong enough. He says he trusts Willie, and Willie says that's why he always gets into trouble. He says that Roxanne is going to begin thinking he's weird or something. He leaves, and Barnabas tells Julia that Sky will come to her in the morning. Julia leaves, and Barnabas thinks back to the room in the East Wing, and wonders who Julia and Elizabeth were talking about... and just who the dead woman is. 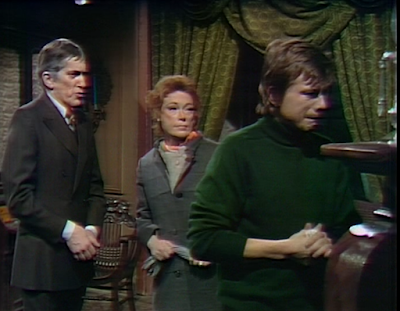 Julia asks Elizabeth about the East Wing, and Elizabeth tells her that aren't any legends about that part of the house. She suggests that Julia should talk to Roger about the history of the East Wing. 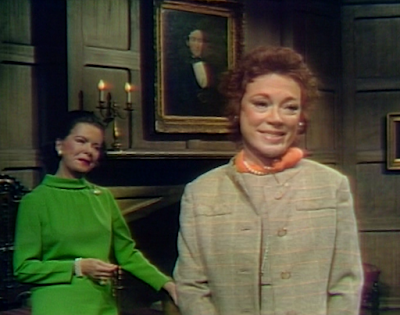 Barnabas returns to Collinwood, and opening the door in the East Wing, he sees Elizabeth and Julia again. Elizabeth is going to remove a covered portrait from the wall, and Julia stops her. She says the portrait has been covered long enough, and she removes it, exposing a portrait of Angelique. Julia says let everyone see it and remember her. Elizabeth says that no one will ever forget her. At the threshold, Barnabas pleads to be let in. 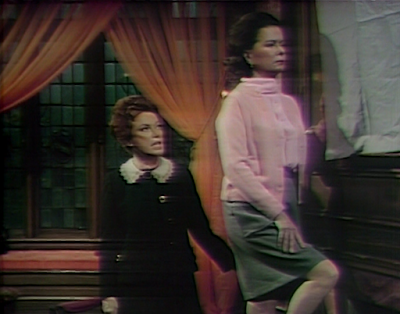 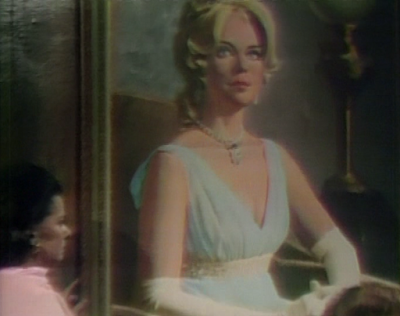 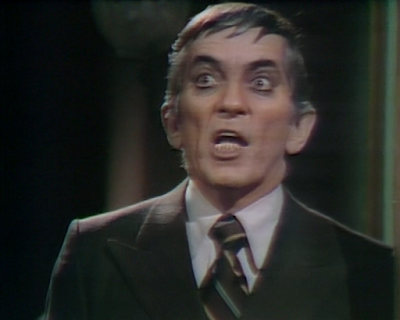 John: In what is perhaps the show's most ridiculous speculation to explain strange events (in a show with no shortage of strange events and ridiculous explanations), Julia lays out the foundation for the Parallel time that we will be experiencing in the foreseeable future. One must wonder if the entirety of parallel time will take place in that one room, from the vantage point of the doorway? And why is the room in the East Wing grand central station in this parallel 1970? Wouldn't you think that it would be a parallel drawing room?

Christine: Personally, I love it! I think the room Barnabas and Julia have found is a portal that links to parallel time, so there probably is a parallel drawing room, they just can't see it since they can't get through the portal. It will be fascinating to find out if they can find a way in, or if the parallel time characters may find a way out into their time band. Incidentally, I couldn't get over Roger's statement to Liz that her marriage ended with disastrous results, considering that his marriage ended when his wife (who was also his grandma) kidnapped David and tried to immolate him. Elizabeth apparently has too much decorum to throw that back in his face.

John: How does Megan know that Philip is dead? She doesn't seem too upset. I'd think she'd actually be more upset about Jeb running off with Carolyn, which you'd think she'd know since she's been lurking around Collinwood.

Christine: I was wondering the same thing. It's no surprise she enjoys her vampire lifestyle and doesn't want to give it up, though I doubt it was because she had nothing without Philip, as she claims. She seems to enjoy having Sky Rumson. Poor Willie has only just returned to work at the Old House and is already being tasked with dispatching Megan. Let's hope Roxanne doesn't end up thinking he's weird because of it! I hope we get to meet this lady some day soon.

John: I wasn't as surprised that the portrait in parallel 1970 was Angelique as I was that it was a NEW portrait of Angelique. I'm hoping that Barnabas will actually have a parallel version of himself... but I'm also wondering if he's not part of that timeline, and if that's why he's able to see it... I guess we'll soon find out!