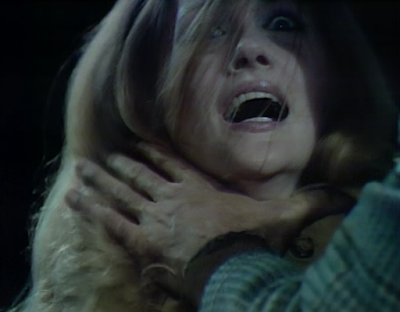 Carolyn goes to Widow's Hill looking for Jeb. She instead finds Sky. He tells her that Nicholas didn't want her to see her own death. He grabs her by the throat and tells her there's no escape. She screams as he drags her towards the cliff. Jeb comes to her rescue, and after grappling with Sky, Jeb is thrown over the cliff. Carolyn runs away. Sky chases after her. 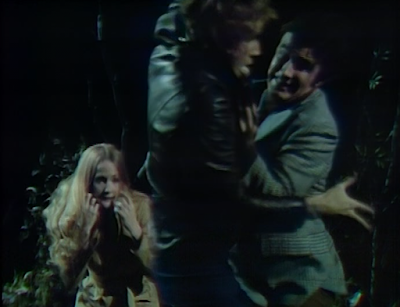 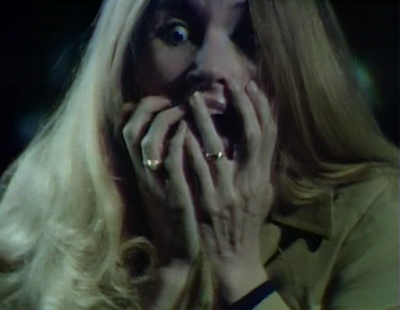 Barnabas is pacing in the drawing room when Julia returns to Collinwood. She tells him that Sabrina is very weak, and asks her why he did it. He says he stayed at the old house, but she came to him. She blames herself for the injections not working. Barnabas says if he could reach parallel time. She asks if that would change things, and he says it might save Sabrina. He wonders if he can live in parallel time in the daylight. She warns that he could get trapped there forever. She tells him that he belongs in this time. 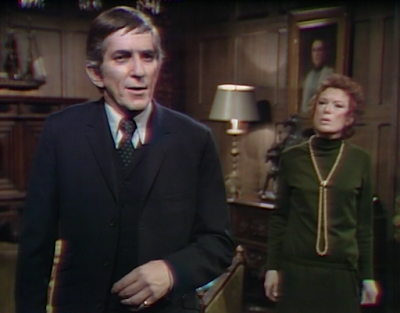 Carolyn returns to Collinwood and calls for her mother. Barnabas asks what's the matter, and she says there was nothing she could do. Her mother comes downstairs and Carolyn bursts into tears saying Jeb is dead. Barnabas helps her into the drawing room. Julia arranges to give her a sedative, and she says she doesn't want a sedative—she wants Jeb. She tells Barnabas that he hated Jeb, and is probably happy to hear he's dead. She says she went to Widow's Hill to find Jeb, and saw Sky Rumson. She says he told her that he came there to kill him. She explains how Jeb arrived just in time to save her, only to be pushed over the cliff by Sky. Barnabas leaves the house. 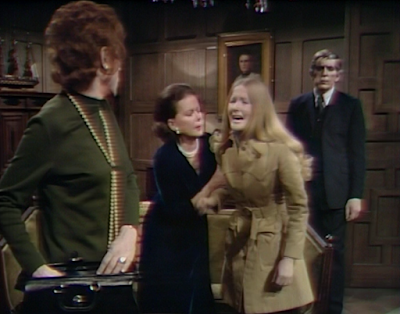 Carolyn falls asleep. Elizabeth asks Julia why Sky would want to kill Jeb. Julia says she's still in danger, and Elizabeth calls the police. Julia realizes that Barnabas left at some point, and wonders where he went. 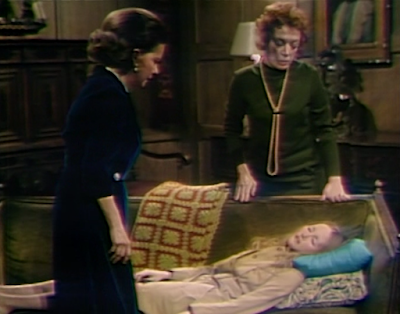 Barnabas finds Sky as he's packing a bag. Sky tries to leave, and Barnabas says he just has one question. He asks if Sky killed Jeb. Sky asks what Barnabas cares about Jeb, and Sky says he should have died after he destroyed the box and the shrine. Barnabas tells Sky that he won't be leaving the room. Sky says Blair made him do it. Barnabas asks what Blair promised him. He says Blair told him it was his duty. Barnabas says that he will do his duty, and approaches Sky. Barnabas says that if he didn't kill Sky, Angelique would. Sky pulls a gun on Barnabas, who approaches as Sky fires. Barnabas doesn't respond. He begs Barnabas to let him live. Barnabas has him point the gun at himself, and then it goes off, killing him instantly. 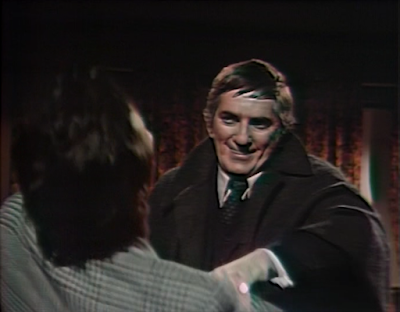 Elizabeth tells Barnabas and Julia that the sheriff can't find Jeb's body. They did find Sky dead at Bruno's house, with a pistol in his hand. She says he died of a single gunshot wound, though three shots had been fired from his revolver. 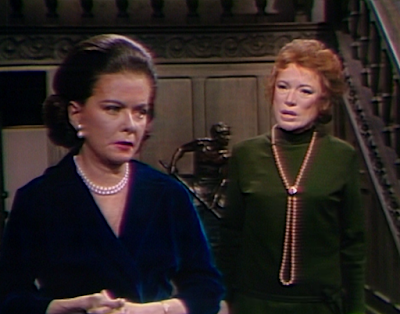 Elizabeth steps out, and Julia asks if Barnabas found Sky. He tells Julia that his death will be ruled a suicide. He tells her he's feeling the urge again, and goes up to the East Wing to see if he can find a way to escape. 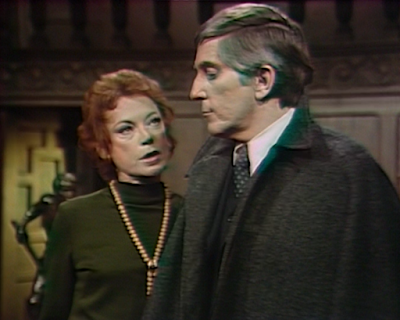 Elizabeth covers Carolyn, who dreams of Jeb. He hears him calling to her. He tells her not to come close to him, because he doesn't really exist. She says he's alive and everything will be alright. He tells her that they will meet again, and things will be different. She tells him that she doesn't want memories, she wants him, and she watches as he falls over the cliff once more. 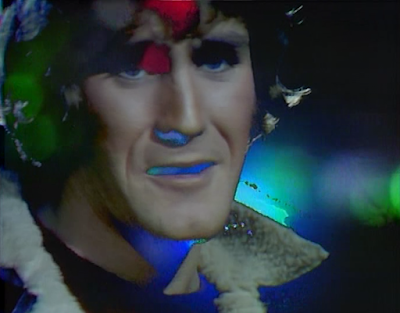 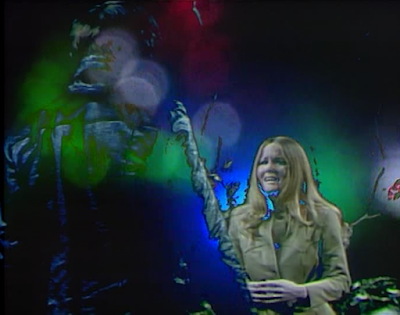 In the East Wing, Barnabas opens the doors and walks into the empty room. He hears Julia calling to him. He turns and finds himself inside the room in parallel time. He sees Julia out the doorway, but she can't get in. He calls to her. She can hear him and thinks he can't hear her. She thinks he may be trapped in parallel time forever. Barnabas wonders how it happened, and what he's going to do now. Carolyn asks him who he is, and what he's doing in the room. 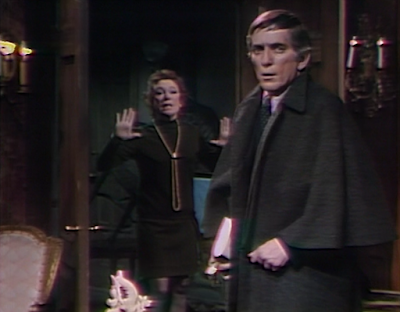 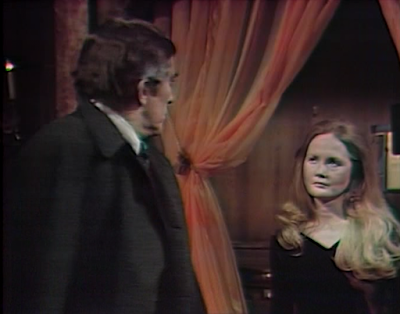 John: Jeb didn't even earn a Philip level exit over the cliff at Widow's Hill. It all happened so quickly, it almost seems like he accidentally went over. I was pretty sure we'd see him again in today's episode, since it wouldn't have made sense to pay him just to fall to his death in the opening scene.

Christine: Nobody can top the Keystone Kops style run off the cliff that Philip pulled. He really set the standard for all other cliff dives to come. Barnabas sure seemed gleeful to do away with the last of the Leviathan gang. His ruthless grin as he turned the gun on Sky was chilling. 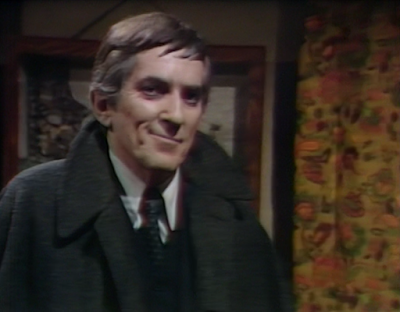 John: Very weird use of the chroma-key effect in Carolyn's dream, with bizarre disco lights shining through Jeb and Carolyn's faces. 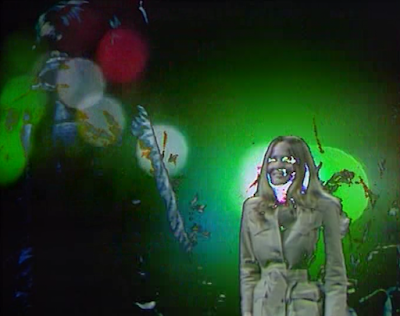 Christine: What kind of medicine is Julia doling out these days?


John: I don't think either Julia or Barnabas knew what was going on between the two tracks of parallel time, and whether or not they could actually see or hear one another. With the deaths of Bruno, Blair, Sky and Jeb, it seems like the Leviathan storyline is officially over, and we're now fully immersed in 1970 parallel time. Everyone strap yourselves in!

Christine: I wonder if Barnabas is going to recycle his 'cousin from England' story for Carolyn Loomis next week, and if she'll be receptive to it if he does. Looking forward to getting to know the parallel Collins clan.
Posted by John Scoleri at 6:00 AM

I have vivid memories of seeing Barnabas do in Sky from when I was about ten years old!

It's a moment that certainly leaves an impact, Jeff. Although we know Sky was a bad dude, Barnabas seems to take such great pleasure in doing him in as he begs for his life. Sometimes it is difficult to reconcile our love for Barnabas with his cruel nature, and the innocent people he has hurt himself.