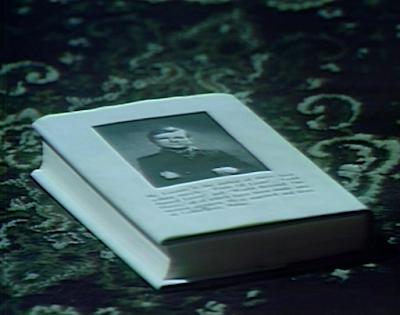 Barnabas picks up the book that flew through the time barrier, and notices the room is once again empty. He reads the title of the book, The Life and Death of Barnabas Collins, by Willliam Hollingshead Loomis. 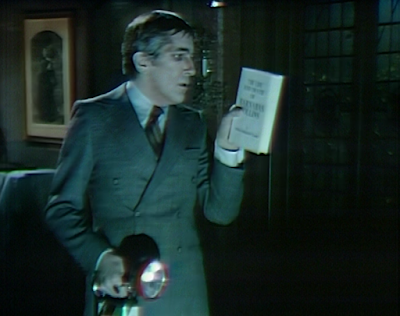 Back at the old house, Barnabas stares at the book. Willie returns and says that he finished. Barnabas stares at him, and Willie asks what's wrong. He asks if it has to do with the book in his hands. He reads the title, and asks who wrote it. Barnabas tells him that he wrote it, and hands him the book. Willie says that nobody knows his middle name. He hands the book back and sees his photo on the back. 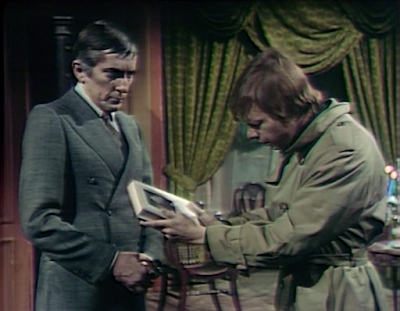 He reads the back that describes him as the author of three novels that have been made into motion pictures. He stops shy of reading that he's married. Willie asks where he found it, and Barnabas says that it was in the East Wing of Collinwood. Willie says the book has a publication date of 1965. Barnabas says they'll find no record of it in their time. 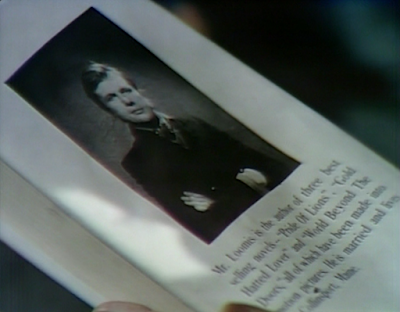 Willie sees an inscription that he can't read. Barnabas reads it—to the Cleo that inspired me. Willie says the book is a pack of lies, because Barnabas never died. Barnabas says there are other existences, and in one he's quite a well-known fellow. Barnabas says in that timeline, he died in 1830, grieved by his wife Josette. He tells Willie to tell Professor Stokes he'd like to see him, while he reads up on his history. Willie tells him that Stokes is having dinner at Collinwood tonight, but he suggests that Barnabas throw the book out. He leaves Barnabas to his reading. Barnabas reads the opening, and then flips to the end to read about Josette once more. 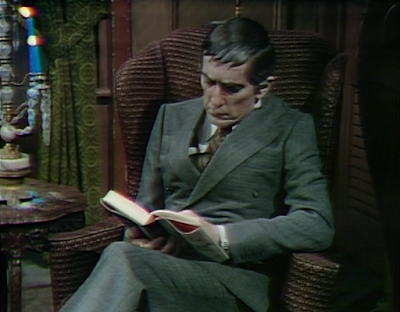 Stokes tells Elizabeth that it's good to see her back to normal. He explains that she was distracted since Paul's death. She says the difficulties aren't over yet, telling him that Carolyn married Jeb yesterday. He asks if she could have stopped them, and she says she ignored the voice in her head and gave her blessing. She says that she hasn't heard from Carolyn, and she's afraid for her. 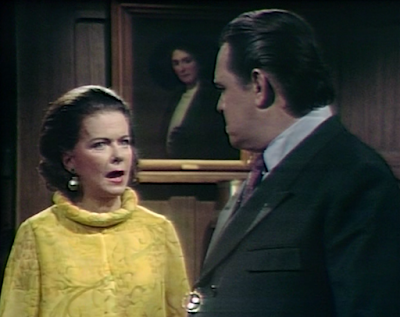 Jeb carefully steps into a dark room and puts down his luggage. He turns on the light and looks around. He's startled by the shadow creature. He shuts off the light. Carolyn sneaks up behind him and he squeals. She turns on the light and he turns it off. He tells her they're leaving right now. She stops him and says they're not going anywhere until they talk. 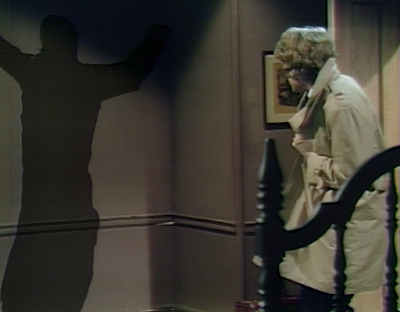 She turns on the light again, and he turns it off again, blaming the bright sunlight on their drive. He tells her that they can take a plane somewhere, but they can't stay here. She asks him what they're running from. She says she wants to understand, and he says that she can't. She says that as his wife, she has to understand. He tells her the honeymoon is over, and they have to get out of there. Barnabas asks if Elizabeth he has heard from Carolyn. She says she has not. Elizabeth steps out to tell Mrs. Johnson that Barnabas is coming for dinner. Stokes tells Barnabas that Carolyn's marrying Jeb could be disastrous. Barnabas closes the drawing room door, and brings up parallel time. Stokes describes his theory, and Barnabas asks if he thinks it's possible. Barnabas tells him he has seen extraordinary things in the East Wing. 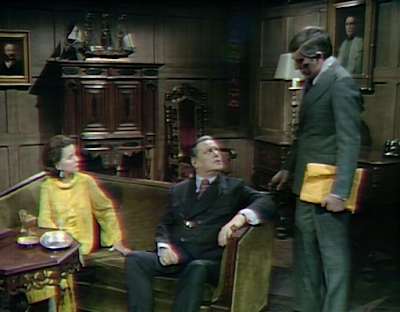 Stokes is surprised by Barnabas' tale. He wishes there was a way to reach them, and Barnabas says there is, showing Stokes the book of his life and death. Stokes finds it incredible, and asks Barnabas to take him to the room immediately. He wonders if he's part of that time band. 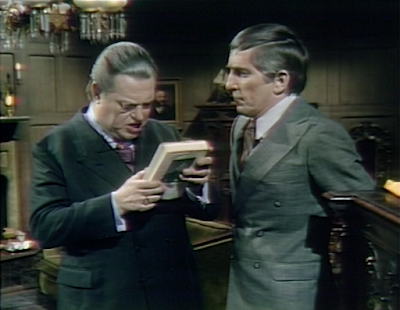 Barnabas takes Stokes to the door in the East Wing. He opens it, and it's empty. Barnabas says he doesn't understand why it's not consistently populated. Stokes says it's the proof of what had only been a theory until now. Stokes warns Barnabas not to do anything that might destroy him. 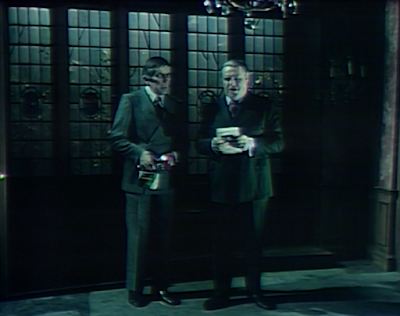 Jeb and Carolyn return to the carriage house. She asks him why he's so angry. He says he's not, and tells her to go to Collinwood while he unpacks. She turns on a light, and when he sees the shadow, he turns it off. He tells her that he doesn't want her, and sends her back to her mother. She tells him that maybe they both made a mistake, and storms off. He sees the shadow and turns off the lamp. 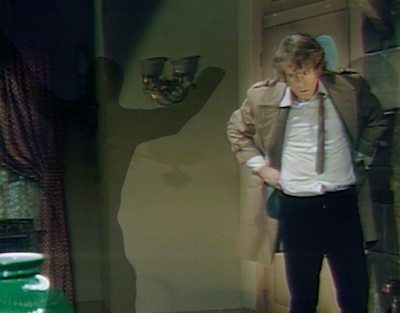 Elizabeth is surprised to see Carolyn home. She asks where Jeb is, and she says he went to the carriage house. She adds that he'll be staying there, and she'll stay in the house, but she doesn't want to talk about it. 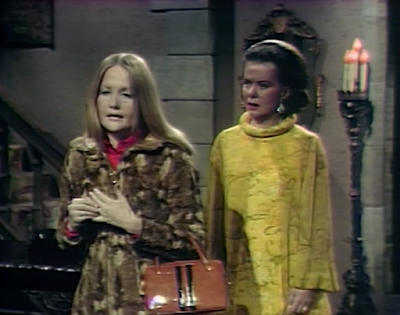 Barnabas returns, and tells Willie that he's been thinking of the life in which he loved and won Josette. Willie reminds him that his life in that room ended in death. 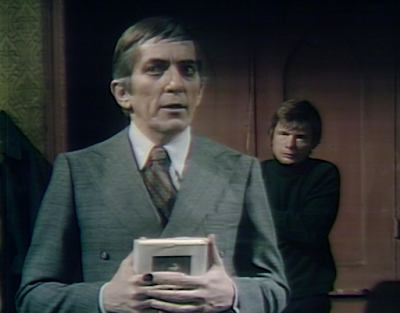 Carolyn bemoans what became of her and Jeb. She goes to the carriage house and he tells her to go away and leave him alone. She says that he can't just sit in the dark, and when she turns on the lamp, she screams. She sees the dancing shadow. He comforts her and says he didn't want her to see it, ever. She asks if it's going to kill him. She says they'll get away from it, and drags him outside. 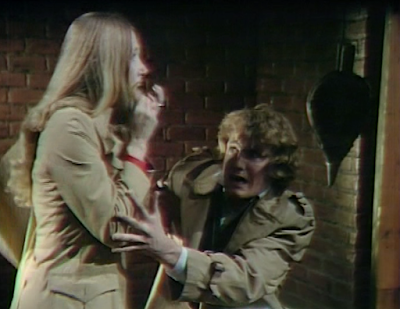 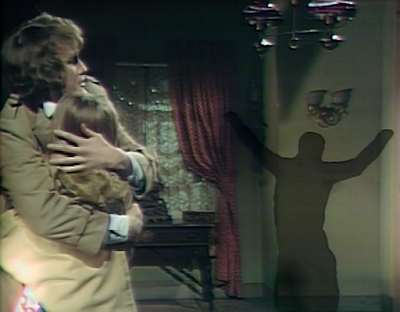 John: I'm surprised that Willie's alter-ego is such a famous writer. The ending of Barnabas' story is pretty lackluster.

Christine: It certainly does not seem destined to be made into a major motion picture, based on the parts we heard. I was disappointed with the abridged version read by Barnabas, but perhaps Julia will show up and provide the cliff notes. It was funny that Willie had to remind him that he died in that time frame, as if that were a bad thing, when it would seem to indicate that he escaped the vampire curse and got to marry the woman he loved.

John: Shouldn't Stokes at least wait to experience what Barnabas is describing before suggesting that he has proven his hypothesis?

Christine: The fact that Willie is the author of the book, along with the picture of him on the back looking considerably more refined, was apparently convincing enough.

John: I do like the current incarnation of the dancing shadow that terrifies Jeb and Carolyn. I just wish Robert Cobert had written a Herb Alpert/Tijuana Brass-type theme for whenever it appeared onscreen...

Christine: I think the dancing shadow was the only one having any fun on that honeymoon. Herb Alpert's Tijuana Brass Band would make the perfect accompaniment to the shadow's shimmy.