Carolyn arrives to see Bruno, who asks how Jeb is doing. She says he knows, and asks where the person is. Carolyn tells Bruno she'll pay whatever he wants. Within the room, Chris begins to struggle. Bruno unlocks the door and opens it for Carolyn. She finds Chris on the ground and he tells her to get out. 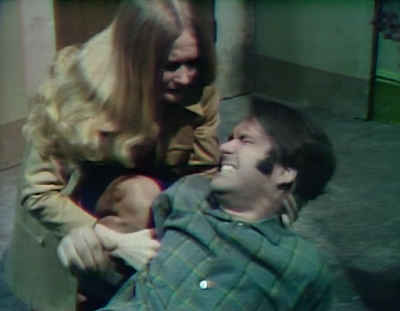 Outside the door Bruno says Jeb will have no reason to live now, and laughs maniacally. Carolyn tries the door but it's locked. Chris tells her not to worry about him, but to find a way out. Carolyn begs for Bruno to open the door. He listens outside the door. 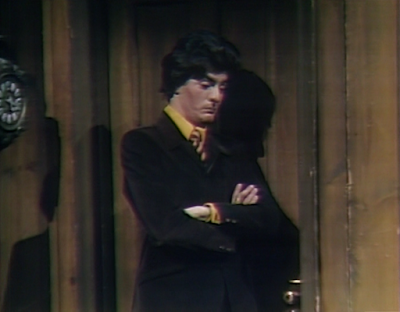 Roger enters and says he saw Carolyn come in, and asks where she is. Bruno says he's mistaken. He hears someone groaning, and Carolyn speaking. Roger asks what Carolyn is doing in that room. Bruno says that he has to leave. Roger grabs a candlestick and knocks Bruno out. He takes the key and unlocks the door. 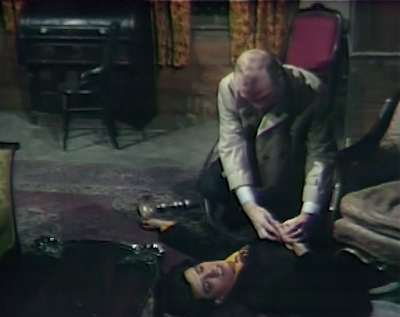 He asks what happened to Chris, who tells Roger to get Carolyn out and lock the door. He does as he's told. Roger says they have to get out before Bruno comes to. He tells her to watch him while he calls Julia. 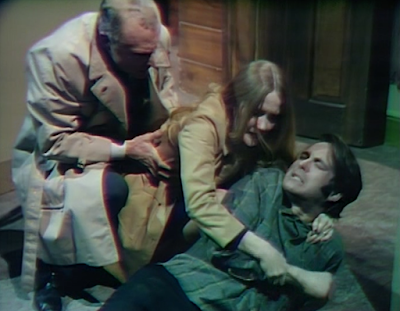 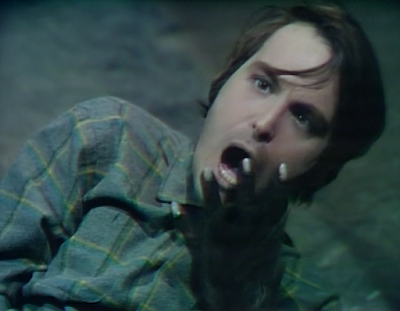 Roger and Carolyn hear glass breaking. They open the door, and find the window broken and Chris gone. Roger takes Carolyn away. After they're gone, Bruno regains consciousness. He looks around and finds that everyone is gone. 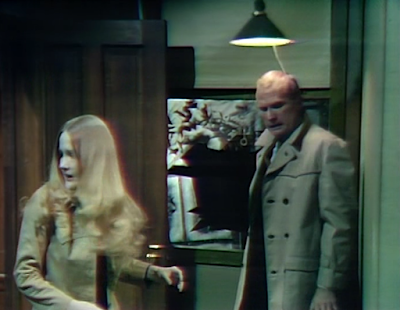 Roger and Carolyn return to Collinwood, and he asks her to explain. She asks if Bruno is a friend of Jeb's, and says he needs to talk to him. She says she doesn't want Jeb or her mother to know what happened tonight, and begs him not to call the police. He asks what Bruno did to Chris. She asks him to promise that he won't say anything about what happened—at least tonight. She says that she'll talk to Jeb. 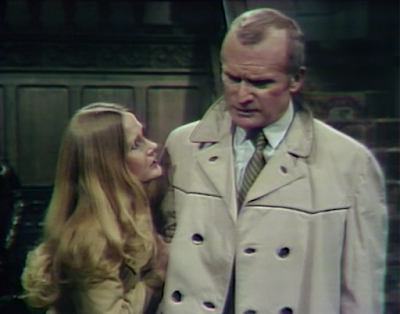 Bruno stares out the open window, thinking that Carolyn's reprieve is only temporary. 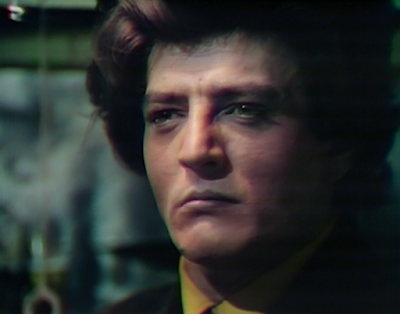 The werewolf wanders through the woods. 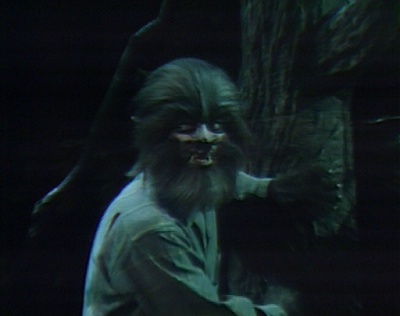 Roger finds Elizabeth is in the drawing room looking depressed. He asks if she's as concerned as she looks. She asks about what, and he says Carolyn and her marriage to Jeb. He says he knows that she's as deeply troubled by it as he is. She says they didn't succeed in making life better for their own children. She says Carolyn is convinced that she loves Jeb, despite his strange behavior. Carolyn walks in, and asks them to stop being so concerned about her and Jeb. She says she doesn't wish to discuss her problems. She says she's going to the carriage house to see him, and he tells her that she's been through enough tonight. Elizabeth asks what he means. Carolyn says she'll be back in a while and leaves. 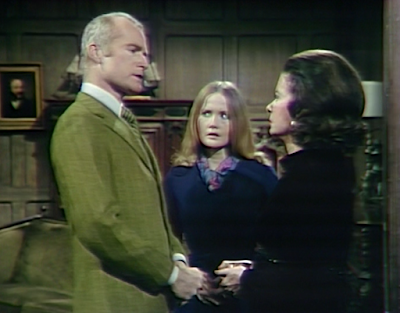 Carolyn makes her way to the carriage house when Bruno startles her. He asks where she's going. She says she's going to see Jeb, and tell him about what happened at Bruno's tonight. He tells her that she's not going to see Jeb. He says he and Blair warned Jeb, and it's been decided that the best way to get even with him is through her. Without her, Jeb will have no reason to live, so Bruno says he's going to kill her. She says he's insane. He grabs her throat, but the werewolf intervenes. He moves Carolyn aside and grapples with Bruno. He throws him to the ground and pounces on him. 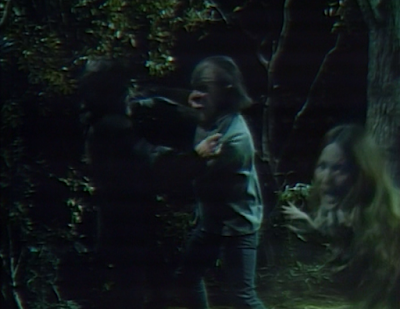 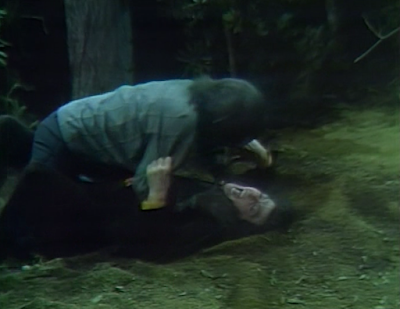 Carolyn returns to Collinwood and calls for Roger and her mother. She says the animal has attacked Bruno and is going to kill him. Roger rushes out as Elizabeth comforts her. 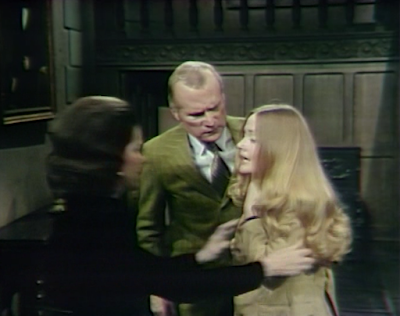 Bruno is a bloody mess, but alive, when Roger finds him in the woods. Roger says he'll try to get him a doctor, and Bruno says it's too late. He says the animal is not really an animal, and dies. 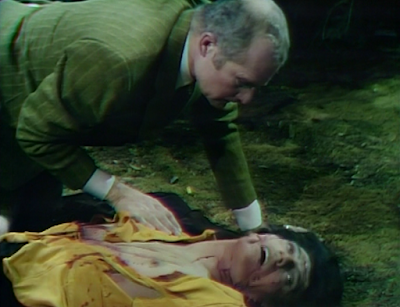 Elizabeth says it sounds like the animal in human clothes that attacked her. Roger says the police have been notified and are searching for it. He tells her there's something he has to do for Barnabas, and leaves. 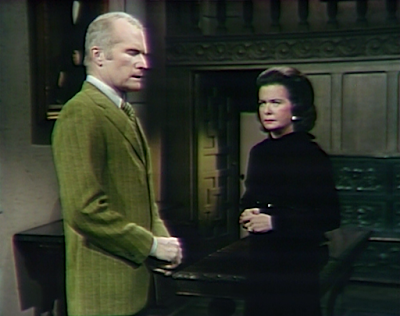 Roger goes to the East Wing and opens the door Barnabas mentioned. He sees the fully furnished room, but is unable to walk in. He sees Bruno, but can't make sense of it because he just saw him die. Bruno talks to the portrait or Angelique, mentioning the music he composed for her that will keep her alive forever. 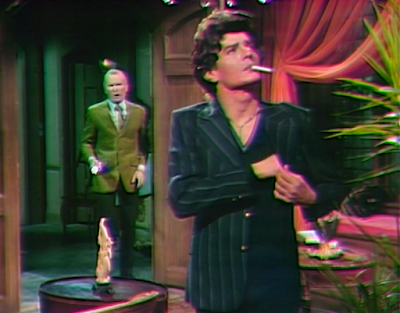 Elizabeth comes in and asks what he's doing there. She says Quentin is returning soon with a new bride, and won't let him stay. Bruno says Quentin will be surprised, because Angelique won't let Quentin bring another woman in the house. Elizabeth asks why everyone speaks of her as if she's still alive. 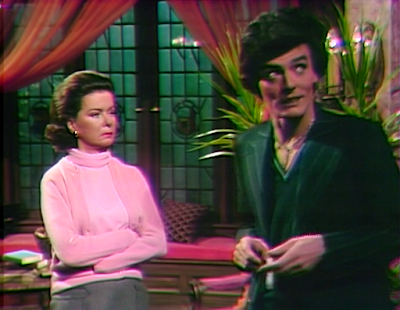 From the doorway, Roger realizes that Barnabas was right. He turns to leave and then sees himself talking to Elizabeth about Bruno. 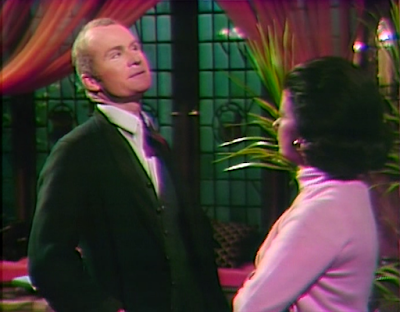 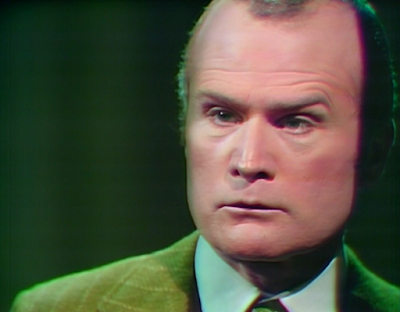 John: Once again, Roger flexes his alpha male muscles, ignoring Bruno's dismissive comments and showing that he's always ready to step up to the challenge when necessary. Of course you'd think with all of the circumstantial evidence, he might finally realize that Chris is the animal that walks (and dresses) like a man...

Christine:  I just wonder if Carolyn recognized Chris' clothes on the wolf man and figured it out herself. 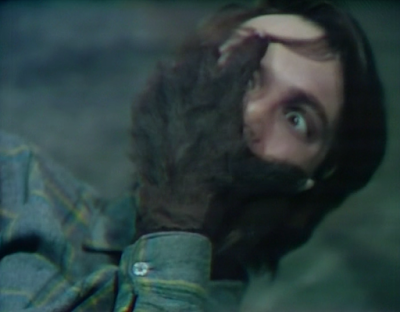 John: Bye bye Bruno! If you dance with werewolves, you'll eventually pay the price. Of course no sooner than we see him shuffle off this mortal coil and whammo, he makes his parallel 1970 debut... as a musician? That should be interesting. 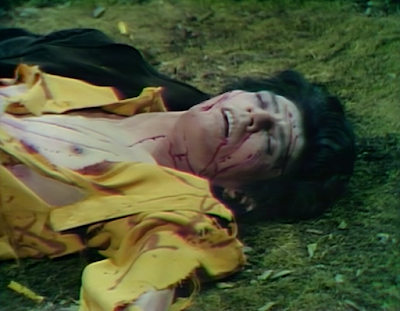 Christine: Now I understand the big Liberace hair. I am a little afraid to hear his compositions, considering his pre-disco attire.

John: Roger-Roger! We finally get our first glimpse of someone seeing their parallel twin. It will be interesting to see what lingering effect this has on him. And Barnabas will likely be thrilled to have independent corroboration of his parallel time claims.

Christine: That was fantastic! I wonder if some of his parallel personality will rub off on him. I'll be interested in finding out if Quentin had an immortal portrait painted in parallel time the same way he did in the current time band, or if he's been living through the ages of the alternate time band by some other means. Also, if there is a parallel Carolyn, then Liz must have married Paul Stoddard in parallel time also. So many interesting things to find out about these doppelgängers.