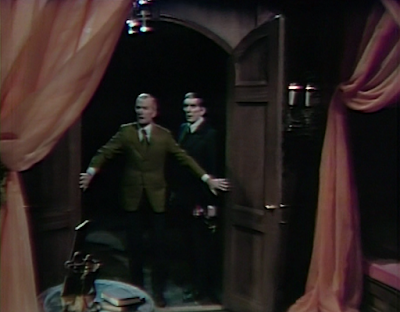 Roger returns to the East Wing with Barnabas, saying how strange it was to see himself. He throws open the doors and they see parallel Roger with Elizabeth. He says he finds it interesting to think Quentin and his new bride would be greeted by Bruno. Roger tells her that he and Angelique shared something very special. He says their minds met and changed each other. He says that she was his very own creation. Elizabeth reminds him that Angelique is dead. 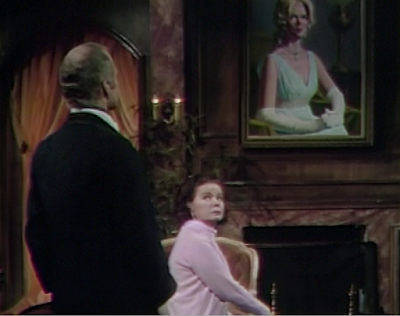 Chris walks in and addresses his cousin Elizabeth. She tells him that Bruno is back, and asks if there's a way to keep Bruno from moving in to the cottage. Chris says he doesn't belong there. Elizabeth asks him to do something quickly before Quentin and his bride return. 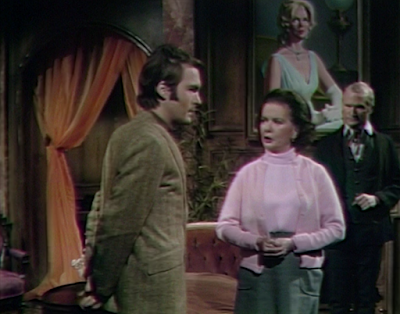 Roger tells them that it's useless. Chris reminds him that Quentin is bringing Mrs. Collins back, and Roger, addressing Angelique's portrait, tells him that Mrs. Collins never left. Roger leaves the room, and as he passes Barnabas and Roger, the room is once again empty. 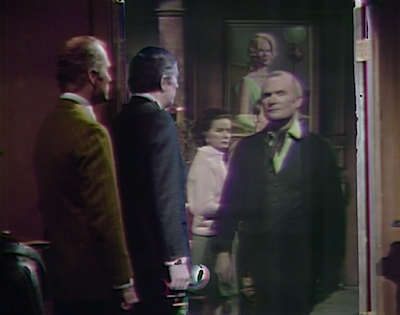 Roger is confused. Barnabas says that no one has seen or mentioned him in parallel time, at least not the Barnabas that Roger knows. Roger asks him what's the matter. Barnabas says he feels drawn to the room. Roger points out that they can't cross the barrier. He adds that barriers can be broken. Barnabas leaves, and Roger explores the empty room. 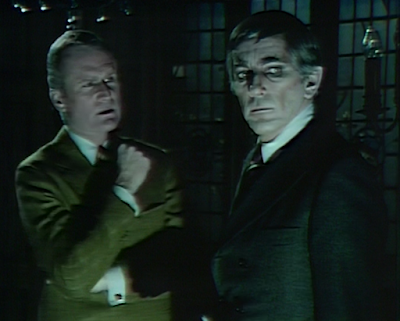 Julia gives Barnabas his treatment, and tells him that this was the last injection she can give him. She says she had to change the formula, and he has reached the saturation point. One more injection could kill him. He asks if she means that he can't be cured. Realizing it's a quarter to dawn, he decides to wait and see what happens. He's stricken with a pain, and he tells Julia that he knows he's not cured. He asks her to help him downstairs. 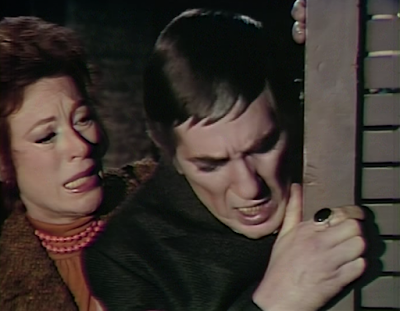 Sabrina is in the cottage when Chris returns. He's pleased to see that she's alright, and she tells him that Bruno is dead. Chris realizes it's Bruno's blood on his shirt. She says the police found her and Sky locked in Bruno's place. She tells him they have to start planning, and he tells her that's for people who have a future. He tells her that they still have to worry about each other, and goes to his room. 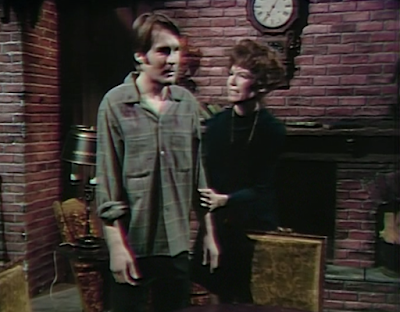 There's a knock at the door. It's Roger to see Chris. Sabrina tells him Chris had a bad night. Chris comes out and Roger asks to speak to him alone. Sabrina leaves them. Roger says he looks better this morning. He says he wanted to get him medical help, but he mysteriously disappeared. He asks Chris if he knows how he got out. Chris says he might have been drugged. Roger wonders why Carolyn was there. He says that even with Bruno gone, he thinks he'll find an answer to this. 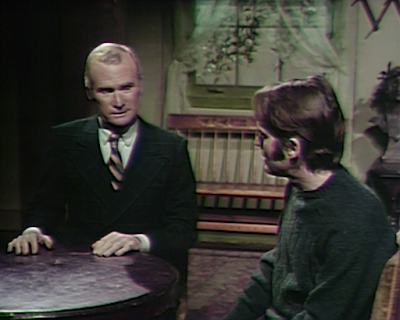 After he leaves,  Sabrina comes out and says that if Roger knew more, he would have told Chris to leave Collinwood. She says they can lock him in a room as needed until they can find a cure. Chris tells her that marriage is out of the question, and storms out. 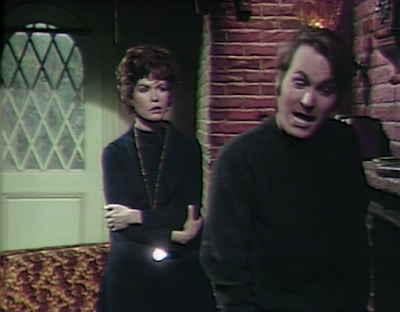 Julia wonders what happened to Barnabas just before dawn, concerned that she might have inadvertently destroyed him. He comes upstairs and she asks how he feels. He says he's never felt such a need for blood before. 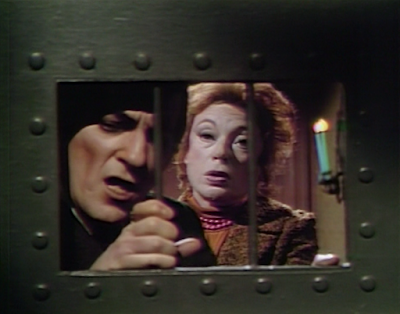 Roger tells Julia that he has seen the parallel time band Barnabas experienced. She's distant, and he asks her what she's thinking. Elizabeth comes in and asks what they are doing in the East Wing. Roger says they're just looking around. Elizabeth asks why everyone is suddenly so interested in the East Wing. 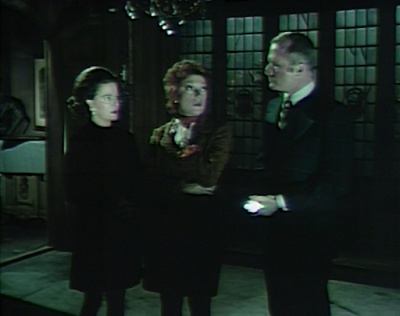 Barnabas prepares to head out to find someone to bite when Sabrina arrives at the old house. He hides from her as she calls out to him. She looks around before heading upstairs looking for him. He comes out, startling her. She says that she wants to marry Chris. She says she can protect him if they're married, and asks Barnabas to help convince him. Barnabas gives in to temptation and bites her neck. 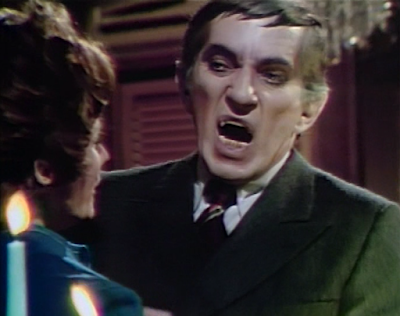 Sabrina returns to the cottage. Chris tells her that he was worried. She collapses into a chair and he notices two puncture wounds on her neck. 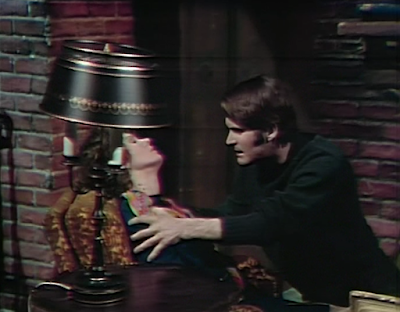 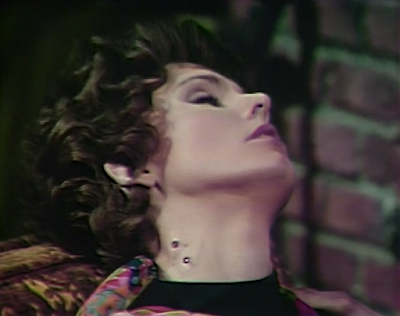 John: Roger appears to have more luck calling up parallel time on demand than Barnabas. I was disappointed that he didn't show it off to his sister when she caught him loitering in the East Wing with Julia.

Christine: I only wish we could have seen her reaction when he tried to explain parallel time to her.

John: I have a hunch this parallel time jumble is going to get much more confusing before it starts making sense. Funny that Chris' presence in parallel 1970, while itself not particularly surprising, did not come as a surprise for Roger, despite his being identified as a Collins cousin. I will say this—aside from finding out how and if Barnabas exists in parallel time, I'm very anxious to see who will be portraying Quentin's bride. If I had to bet today, I'd say that it's going to be Maggie/Kitty/Josette.

Christine: If we tug too much at the loose strings, this whole storyline will unravel quite easily. Quentin is either married to Maggie or Sabrina, because they are the only two ladies on the show who haven't appeared in parallel time yet, though Maggie makes the most sense, since she and her lookalikes are Angelique's long standing nemeses.

John: Poor Barnabas just couldn't help himself! Vamps gotta eat! Of course this means Sabrina will be the center of the ultimate monster-rally love triangle. But who will prevail? The werewolf? Or the vampire?

Christine: That'll teach Sabrina for entering a house uninvited. If she thought she saw Barnabas at the window and he wasn't answering the door for her, then she should have known he didn't want to be disturbed. He sure did a real number on her neck, though. I was surprised Julia didn't offer herself to him as she's done in the past, to prevent him from going out to seek a tasty treat elsewhere. 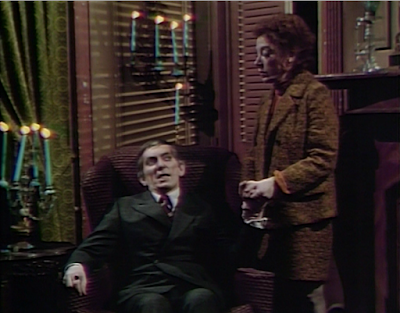