Barnabas returns to Collinwood, and opening the door in the East Wing, he sees Elizabeth and Julia again. Elizabeth is going to remove a covered portrait from the wall, and Julia stops her. She says the portrait should not be hanging now. Julia tells her that until he tells them, it will hang. Julia says that it has been covered long enough, and she removes the cover, exposing a portrait of Angelique. Julia says let everyone see it and remember her. Elizabeth asks how anyone could forget her. She closes the door, and at the threshold, Barnabas pleads to be let into the room. 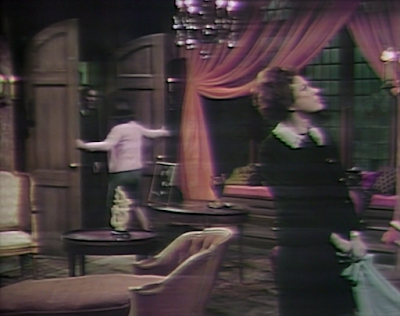 The doors open, and Barnabas is able to enter the now empty room.

Elizabeth tells Julia that the East Wing is remarkably free of secrets.

Barnabas is bewildered. He looks to the wall where Angelique's portrait had been hanging. He wonders if he'll ever find out what it all means. He hears footsteps and hides behind the door. He assumes it's Roger, who would only be there to see one person. He follows Roger, assuming that he will lead him to Megan. 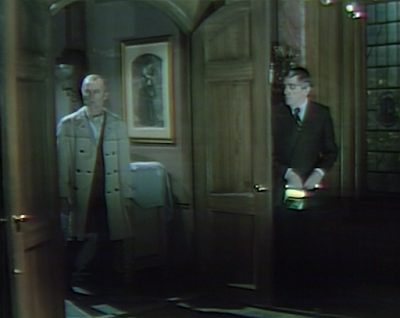 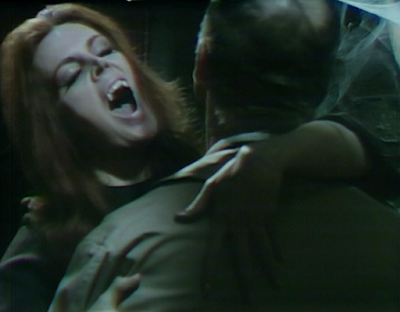 Elizabeth thanks Julia for the conversation. She asks if she thinks Carolyn will be alright with Jeb. She goes upstairs, and Barnabas comes in. Julia asks if he went back to the room in the East Wing, and he describes how she and Elizabeth were quarreling over a portrait of Angelique. Julia is surprised to hear that Angelique is part of this other existence, too. Julia points out that if it is parallel time, he mustn't become part of it. She suggests that they talk to Stokes, and Barnabas says that they have other things to deal with first. He tells her that he found Megan's coffin, and that she's using Roger to guard it. He hears a rooster, and Julia tells him she'll walk him back to the old house and talk to Willie. 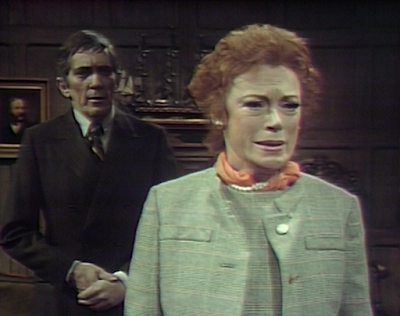 Roger sits beside Megan's coffin. She asks if anyone saw him come there, and he says anyone who knows will pay with his life. Megan tells him that after it is dark, they will find another, safer place. Roger closes the lid on her coffin. 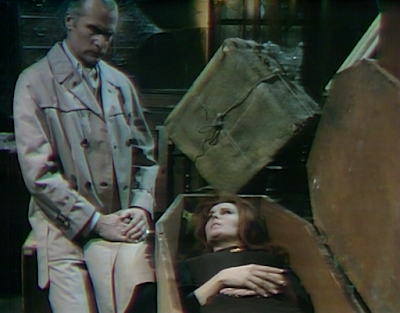 Julia confirms that Willie knows what must be done. She hands him the hammer and stake. She says it must be done before Barnabas rises. She tells him to come to Collinwood saying that he's there to get some books for Barnabas. He tells Julia there's a lot more to his life than Roxanne knows about. 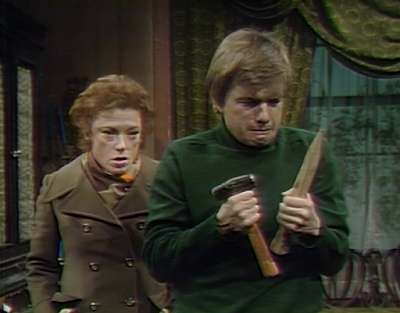 Elizabeth is in the drawing room when Julia returns. She asks her if she has seen Megan. She says she hasn't been in her room, and wonders if she should call the police. Julia suggests she's probably just thinking things through. There's a knock at the door and it's Willie, arriving with a briefcase, to get some books for Barnabas. Julia takes him upstairs. 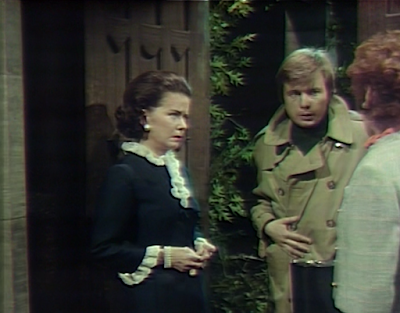 Roger lies asleep on the coffin.

Outside the room, Julia tells Willie not to think of Megan as a person. She says she's an evil thing. She says he needs to hammer the stake deep so Roger can't remove it.

Julia and Willie enter and Roger wakes. He tells them to get out. Julia tries to reason with him, but Roger and Willie grapple. Willie knocks Roger out by breaking a bottle over his head. He tells Julia to check on him while he takes care of Megan. 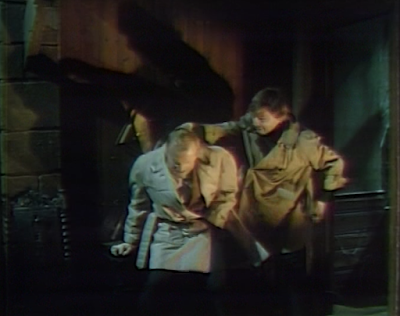 Willie opens the coffin and drives the stake through her heart. Megan screams in agony. 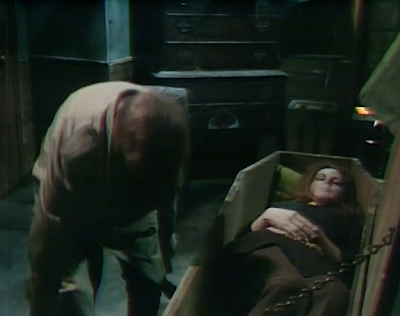 Roger stirs, and sees Julia standing over him. He asks what she's doing there, and she explains that Elizabeth told her she could explore the architecture in the East Wing. He asks what he's doing in the East Wing. He says there's no reason for him to be there. She says that a blow to the head may have caused him to forget. He thinks he hears something in one of the rooms, but Julia convinces him to go downstairs to put a compress on his head. 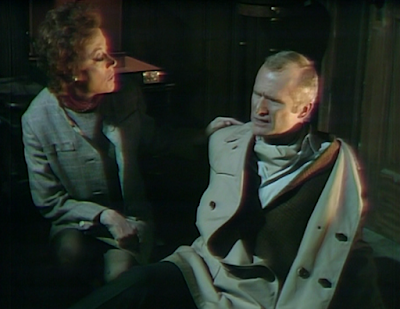 Willie tells Barnabas that he did it, and he'll never forget Megan's face. Barnabas tells him to take the coffin and bury it in an unmarked grave. Then he can dispose of her clothes. Willie says that will be easy by comparison. Julia tells Barnabas that she'll explain to Elizabeth that Megan chose to leave Collinsport. Barnabas asks Julia if she heard anything in the East Wing, and she says she did not. He tells her something keeps drawing him back there. She tells him that she hopes whatever is drawing him there doesn't harm him. 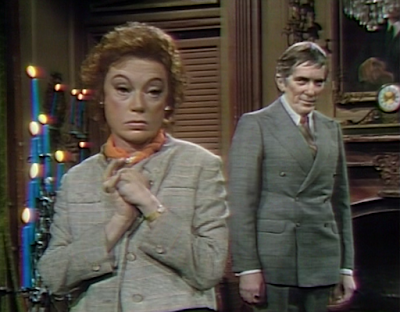 Barnabas returns to the East Wing. He opens the door and sees Willie. He can't step into the room, and Willie can't hear him call. Willie snoops around drawers when Julia comes in and says those are 'her' things. He says that Angelique is dead, and she doesn't need them. Julia tells him to get out. 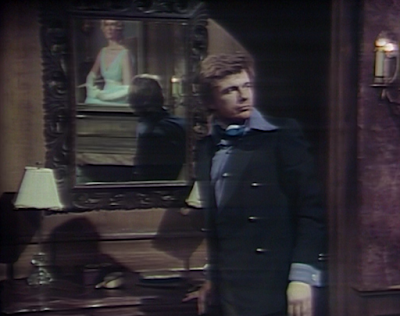 He says he's there for a book that belongs to him. He finds it, but Julia takes it from him. She throws the book into the hall. 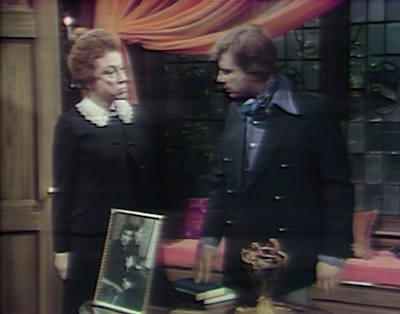 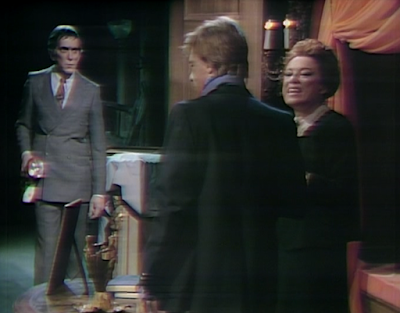 Barnabas picks it up, and when he turns back around the room is once again empty. He reads the title, The Life and Death of Barnabas Collins, by Willliam Hollingshead Loomis. 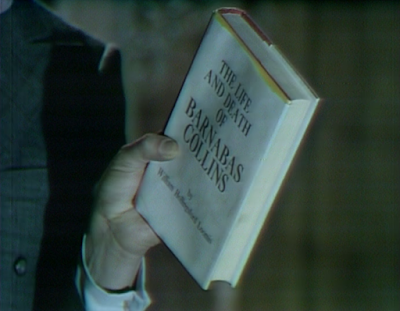 John: How is it that Julia could explain with a straight face how Megan is an evil thing that must be destroyed, and ignore the fact that she's a vampire just like her true love, Barnabas. I do think Megan found her calling as a vampire... she was so much more effective than she was as a nutty mother with a baby-doll complex or shopkeeper/Leviathan midwife. 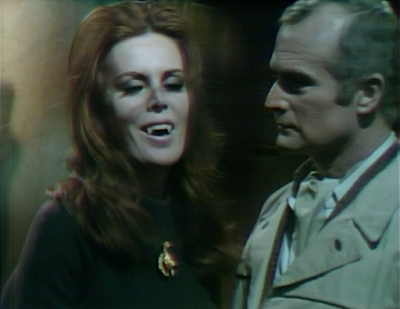 Christine: I agree. It's too bad she got staked so soon, and it was disappointing that we didn't get to see it happen. At least we got a good scream. I think Julia differentiates between Megan and Barnabas because Barnabas does not want to be a vampire and is trying to regain his humanity through her treatments. Since Megan refused treatment for her vampirism, and was feasting on a family member, it made her a threat that needed to be removed.

John: Quite the knock-down, drag-out fight between Willie and Roger today. Good thing for Willie's sake that Roger has already forgotten it. I never take Roger for a tough guy, but I have to admit, when push comes to shove, he doesn't back down like the spoiled trust fund brat one might assume the not-quite-master of Collinwood would be. 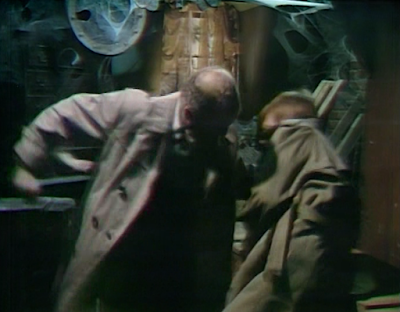 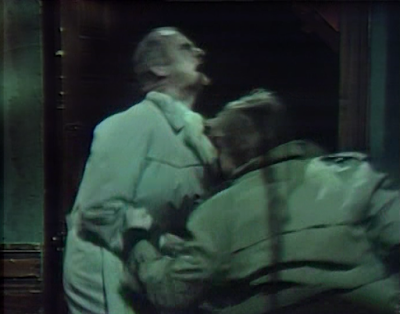 Christine: Surely he gave as good as he got while he was under Megan's control, but I doubt he'd be able to pull that off now that she's dead.

John: I can't wait to hear the story of the life, and particularly of the death of Barnabas Collins! That would have made for a cool side story arc. I hope, since they went to the trouble of putting the book in his hands, that Barnabas will share the story with us. Though I do think they could have given it a better cover...

Christine: I hope we get to hear it too! Why was the book able to cross into Barnabas' time band and why is he drawn there? It seems he's being targeted. To their credit, it looks like they went to the trouble of putting William Hollingshead Loomis' photo on the back. I can't wait to get to know more about this finely dressed, accomplished author! Parallel time is intriguing! 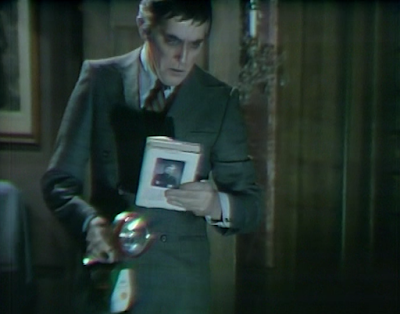