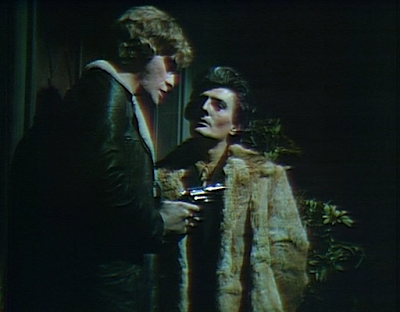 In the crypt, Jeb confronts the werewolf. He shoots him in the chest several times, but the werewolf keeps coming. Outside, Bruno smiles as Jeb cries for help. Jeb then hits the werewolf with the gun. He bangs on the door begging Bruno to let him out. He then picks up the whip and uses the silver end to force the werewolf back. 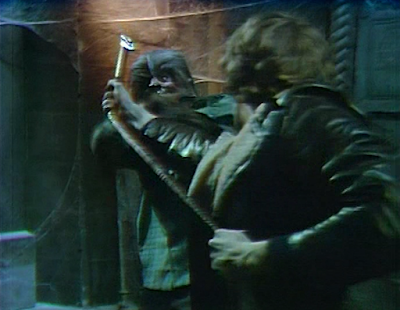 Carolyn comes downstairs as Quentin arrives at Collinwood. She says Jeb will be back soon, and Quentin tells her that never would be too soon. She asks why he has a problem with Jeb, and Quentin tells her that Jeb is no good for her. He says she can't love him. Carolyn says that he, Barnabas and Julia shouldn't try to force her to choose between them, or she'll have to find new friends. 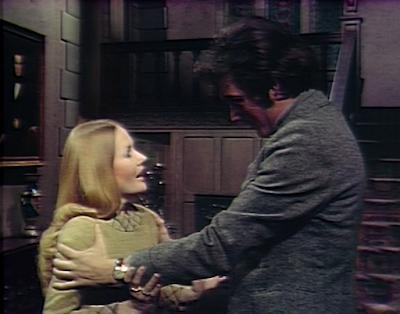 Bruno returns to the cottage, and Megan points out he seems to be in a good mood. He tells her that Jeb can handle the werewolf, and he'll handle Barnabas the vampire. Megan is shocked, and says it's impossible. Bruno says they can prove their value to Jeb by finding Barnabas' coffin. Bruno tells her that she could get Barnabas to tell her where his coffin is. She says she doesn't know, and leaves. 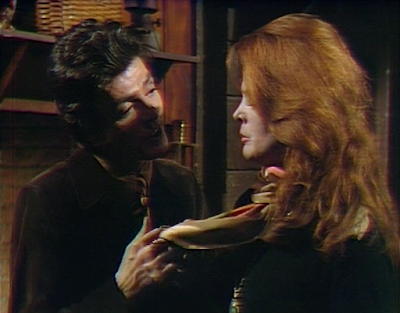 Quentin is walking through the woods when the werewolf pounces. Quentin asks what happened to him. He realizes that someone must have tried to kill him. He asks the werewolf if it killed them. He says he wants to help him. The wolf falls to the ground. Quentin looks up, and seeing the sunrise, says the night is over. The werewolf reverts to Chris Jennings. 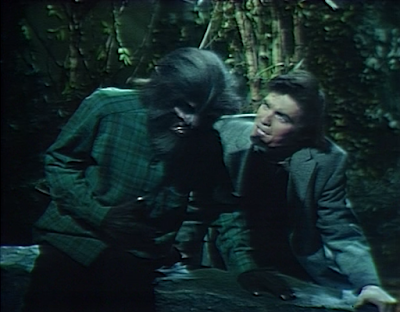 Bruno downs a drink. He's shocked to see Jeb return. Jeb tells him that he got away, but Bruno won't. He says he was betrayed by a rat, and Bruno asks who. Jeb asks him why he didn't stay around for the kill. Jeb says he forgot the silver handles whip. Bruno denies that he did anything wrong. 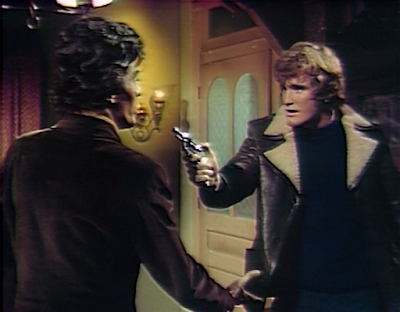 Bruno tells Jeb that Megan was at the cottage, and she had betrayed him. Jeb asks how, and Bruno says he saw fang marks on her. Jeb accuses him of lying, and Bruno assures him that it's true. Jeb is upset to find that Barnabas got to her. Bruno says she must have changed the bullets. Jeb tells Bruno that they'll find out if she betrayed him tonight—together. 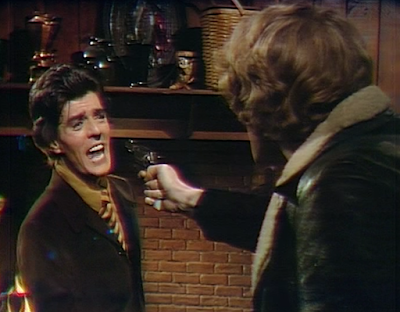 Megan lies in bed moaning about Barnabas. Jeb and Bruno stand over her. Bruno says that now Jeb knows the truth. Jeb says poor Megan, and Bruno reminds him that she set him up. He goes to strangle her, and Jeb stops him. Jeb says it's his fault because he made Barnabas a vampire. He says that Megan won't pay for his mistake. 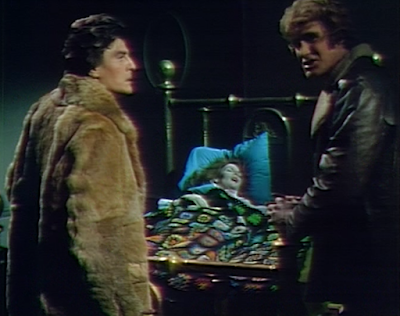 Jeb and Bruno come downstairs. Bruno says they can kill Barnabas now if they can find him. Jeb tells Bruno that when night comes, he's to prevent Megan from leaving the house. Bruno asks him why he doesn't trust him. Jeb blames him for leaving him alone in the crypt. Jeb tells him that if anything happens to Megan, he'd hate to see what will happen to Bruno. 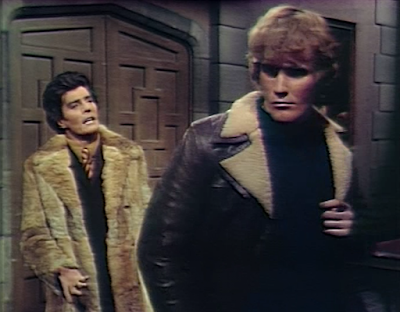 Quentin tells Chris that he knows the feeling. Chris says he didn't have an enemy who knew his secret. He says Bruno might kill him next time. Chris tells Quentin that there's no help for him. He says he is what he is because of him, and asks Quentin to kill him. Quentin says he doesn't understand why Bruno didn't try to kill him. He asks Chris what happened. Chris tells him that the last thing he remembered was the dead sheriff standing over him with a gun. 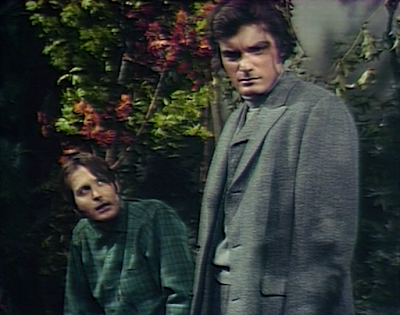 Carolyn is at her father's grave when Jeb approaches. She starts to cry and he comforts her. She says she suddenly felt alone, and he assures her that she won't be alone as long as he's there. She asks how long that will be. She says that her father left her once, and then he returned, and then she lost him again. She says she feels doomed to lose everyone. He tells her that she won't lose him. He asks what else is bothering her. She says she had an argument with Quentin last night. He asks what Quentin said, and she tells him he said that she shouldn't see him. She adds that if Quentin felt that way, they couldn't be friends. Jeb tells her to hang on to him, and that he's all she'll ever need. 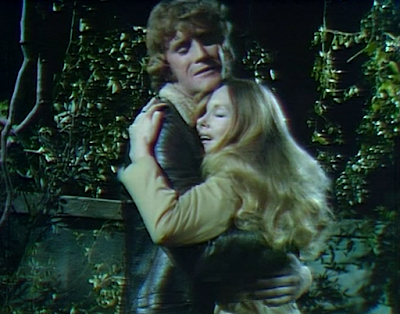 Megan comes downstairs and goes outside, where she's intercepted by Bruno. He asks her where she's going. She says she's going for a walk. He pulls off her scarf and tells her that he knows what she's doing. He tells her Jeb wants her to stay inside, and he forcefully pushes her back into the house. 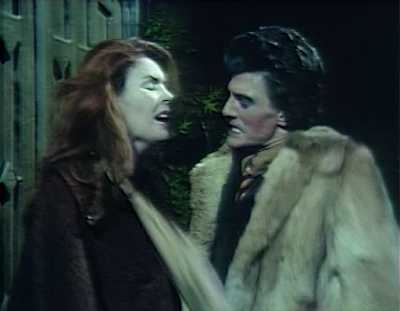 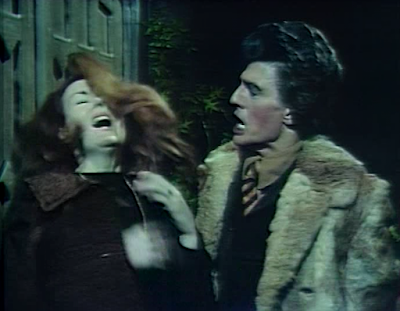 Quentin and Chris exit the crypt. He says they now know he didn't kill Bruno. Chris asks who he did kill, and Quentin says he killed a dead man, which is better than having him walk around.

Jeb stands over a number of fresh graves, and asks the occupants to join him. He calls upon them, offering an exchange of five souls for four dead servants. Hands break through the soft earth. 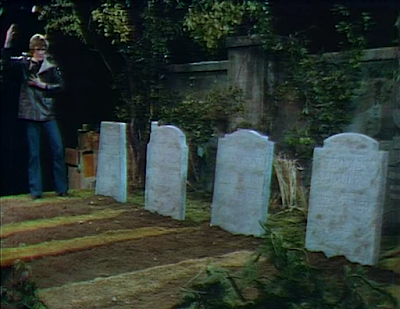 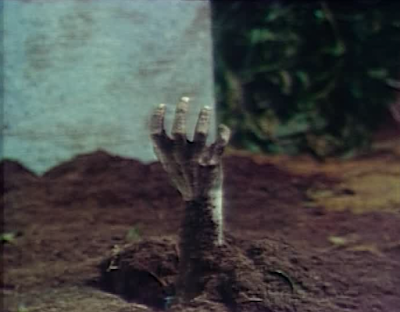 John: Once again, the werewolf fails to kill his nemesis. Though I'm beginning to doubt that the werewolf realizes that he has a nemesis in the Leviathans. Or what/who the Leviathans are, for that matter. I think what we've got is a centuries old conflict that is completely one-sided.

Christine: Chris acknowledged that he inherited his lycanthropy from Quentin, but I was really hoping he was going to call him Grandpa Quentin.

John: Bruno, Bruno, Bruno... will you ever learn? It cracks me up how he so quickly toggles between tough guy and whimpering cry-baby. If he was really so tough, wouldn't he just stand up to Jeb?

Christine: He and Jeb share that as a common trait. Bruno really was quite the dandy in today's episode. He appeared to be wearing more make-up than Megan today. 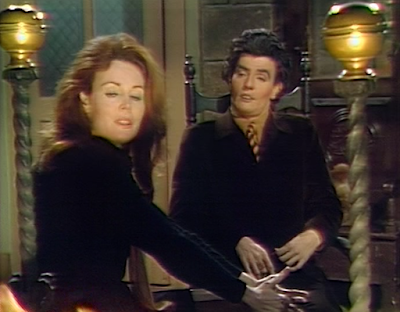 John: Just as I was prepared to mourn the loss of resident Zombie, Sheriff Davenport, it's time for a Zombie-fest! While I was almost willing to buy that the four graves could be freshly dug by their 1970 dates—the first one shown is dated 1969... a little too long for it to be considered fresh. And sad that they could only afford to have one zombie hand actor on set today. It will be nice if we get a gaggle of zombies tomorrow.

Christine: Today's episode holds the record for most gravesites shown in a single episode, which means it's only a matter of time before I add a page dedicated to gravestones under Historical Collections. Surely the sole zombie hand was a teaser for the dead man's party we can expect tomorrow! I wonder if Thomas Findley was related to Janet Findley. I also wonder why Tom Jennings, Sheriff Davenport and Jeremiah Collins are buried side by side. I still have to laugh at Sheriff Davenport's gravestone, though I'm beginning to believe that Sheriff really was his first name. Hopefully somebody took the time to return his shredded zombie bits to his grave. 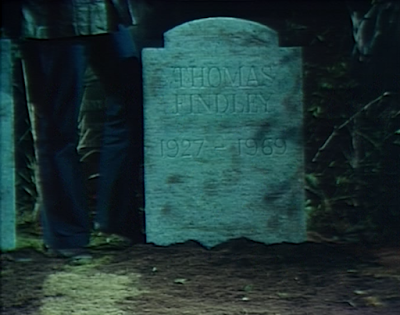 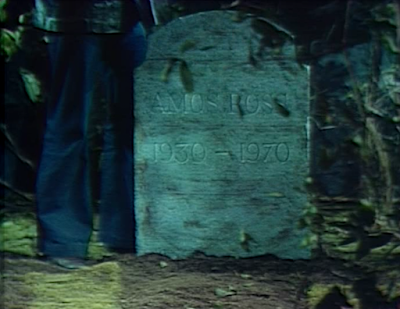 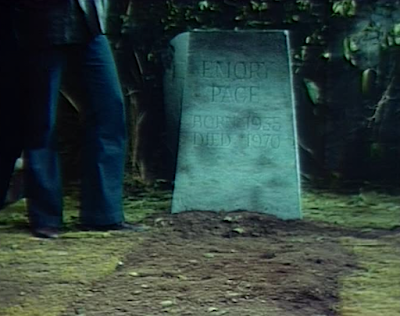 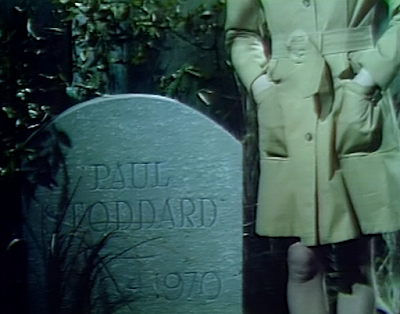 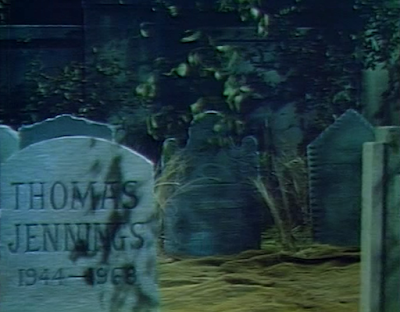 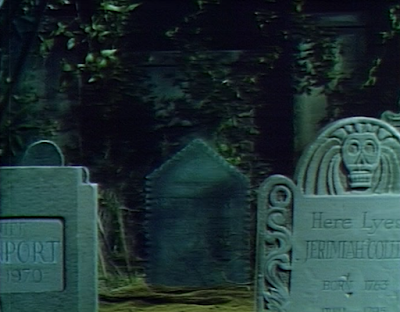 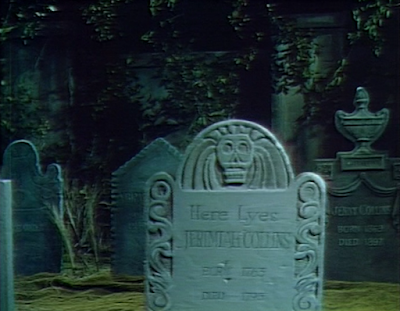