Bruno tells Sabrina that there's nothing else to say. She replies that she'll let this speak for her, and pulls out the revolver. He asks what she thinks she's doing. She says she loves Chris, and will not let anyone harm him. She tells Bruno that she's going to kill him. 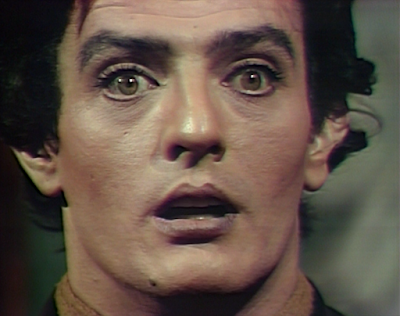 Sky comes in, startling Sabrina. Bruno takes the gun from her, and Sky grabs a hold of her. Bruno tells her that he admires her, and he's grateful for showing him how much she loves Chris. He says that if he loves her as much, he'll be very useful to them. He tells Sky to take her in the back and stay with her. Sky tells Bruno he doesn't like his attitude. Bruno assures him that Blair will back him before Sky, and he takes her into the back. 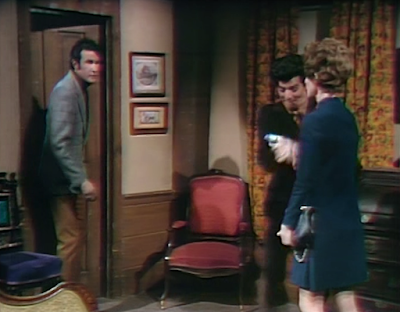 Sabrina asks Sky why they're so anxious to hurt Chris. Sky says he doesn't even know who Chris is, and she can ask Blair any questions she has when he arrives.

Blair arrives, and asks Bruno what's going on. He tells Blair that he wants him to meet a woman. Sky asks to talk to Blair, but Bruno says he has to wait. 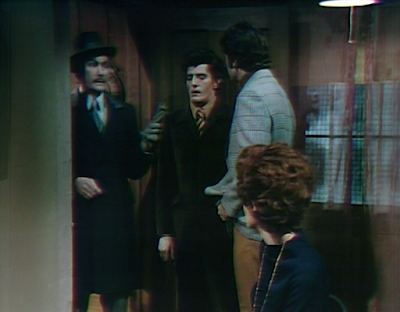 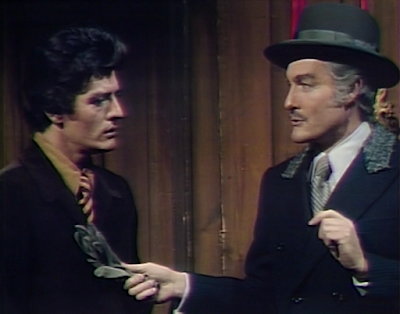 Jeb is in the drawing room when there's a knock on the door. Chris asks if Sabrina is there, and Jeb says he's the only one there. Chris says that Carolyn might know. Jeb says she left with her mother. Chris leaves. 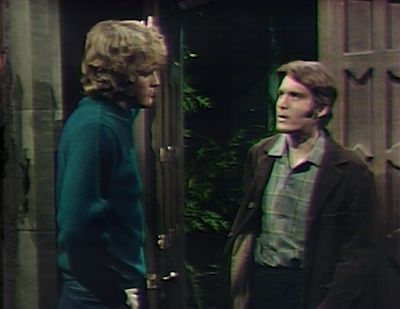 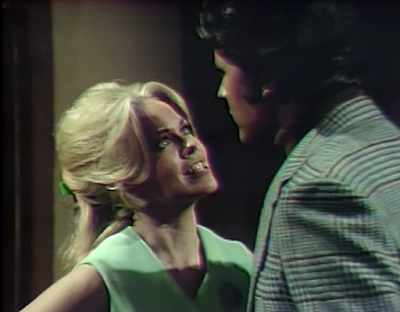 Nicholas comes to Collinwood to see Jeb. He turns on the light, and Jeb asks if he's come to help him. Blair tells him the simplest thing for him to do is accept that he is a doomed man. Jeb says that Angelique will not destroy him, and Blair says that he hopes not, because he wants to save the privilege for himself. He turns out the light and bids Jeb goodnight. 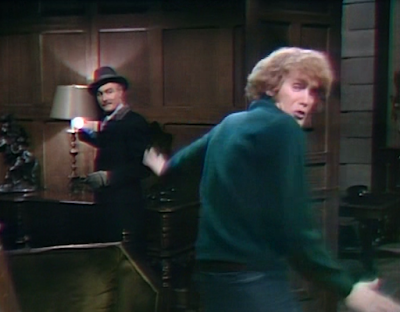 Chris is on the phone with Quentin, telling him that he's not going anywhere until he finds Sabrina. He hangs up and there's a knock at the door. It's Sky. He tells Chris that he knows where Sabrina is, and she's in grave danger. He says she's with a man named Bruno. Sky says he's there to help Chris and Sabrina. He shows her Sabrina's compact. He says he had been guarding her for Bruno and Nicholas Blair, but he's tired of them. Chris asks how he can know if it's not a trap. Sky gives him the key to Bruno's. He says if Chris comes at midnight, he'll take care of Bruno so that Chris can rescue Sabrina. 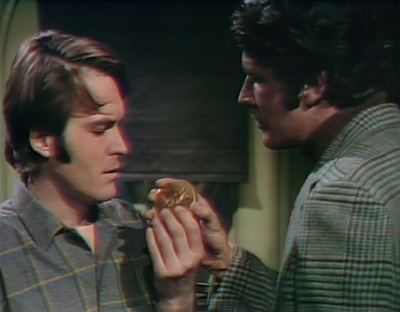 Jeb turns on a light and watches for the dancing shadow man. It appears, he says it's even bigger, and then he turns out the light. He calls to Angelique. 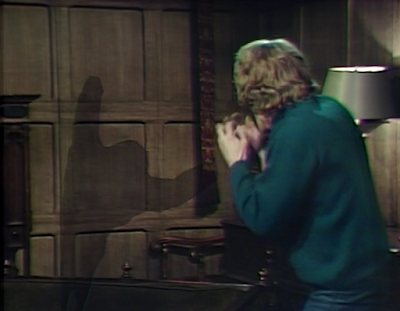 Sky asks Sabrina if they treated her alright while he was gone. She says they haven't done anything. He says that if all goes well, Chris will be there to rescue her at midnight. Bruno eavesdrops outside the door. He opens the door and asks Sky to come out for a minute. Bruno asks Sky where he went earlier. Sky says he went into town to talk to a friend visiting from New York, Bruno reminds Sky that all he's got is Blair and him. 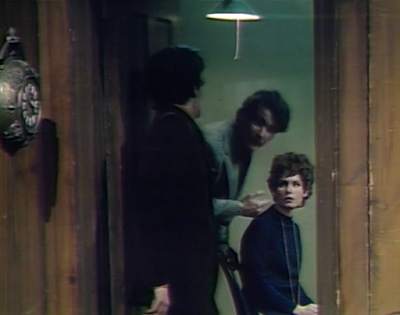 Jeb hears Angelique saying that he can't hide, no matter how hard he tries. She appears in the drawing room with him. She tells him to turn on the light, and he's reluctant. She assures him that as long as she's there, the shadow won't hurt him. 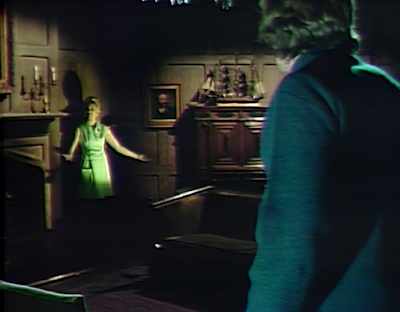 He tells her that he's changed, and he's married to Carolyn now. She says she loved Sky, and she holds him partially responsible. She says she'll deal with Blair next. Jeb asks her to think of Carolyn. She says she identifies with her, and knows how it feels to be unhappy. Angelique turns off the light, and tells him that soon the shadow will be full grown, and overtake him. She tells him that she'll be there when it does. 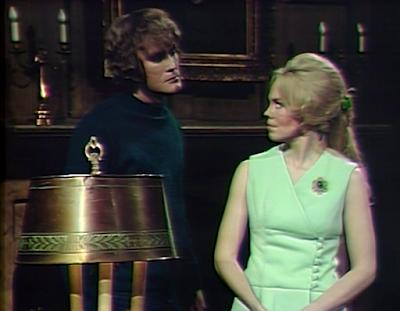 Chris arrives at Bruno's at midnight. He goes inside, opens a door, and finds Sky tied up in a closet. Bruno bids him a good evening, and tells him that he and Sabrina have been waiting for him. He turns to find Bruno pointing a gun at him. 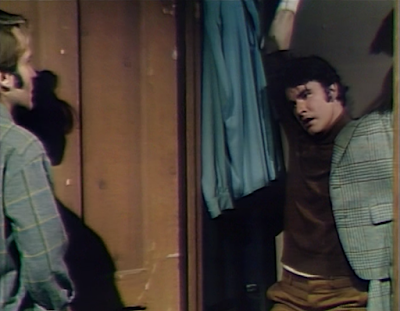 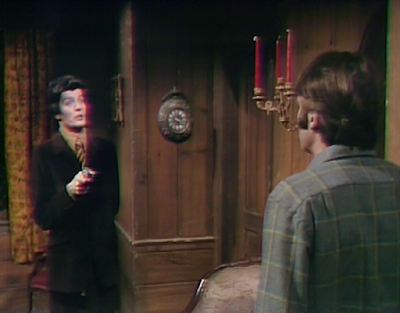 John: I enjoyed how Bruno and Sky were both vying for Blair's attention. If Sky had put half that effort into his marriage, he and Angelique would probably be living happily ever after.

Christine: Angelique should be happy that Nicholas helped to expose Sky for the worthless jerk he really is, rather than holding him accountable. Why isn't she doing more to make Sky suffer, as is her typical fashion with men she loves who have wronged her? It wouldn't seem to be satisfying enough for her to simply allow him to self destruct.

John: Didn't it seem too abrupt for Sky to decide to turn on Blair and Bruno? He was so invested in the Leviathans, he was prepared to kill his trophy wife! I look forward to their reunion, although I think the odds of them both walking away from that alive are pretty slim.

Christine: His quick turnaround had me initially thinking he was working with Bruno to lure Chris over there to trap him, just as Chris thought. Perhaps it stung when Angelique called him a lackey, and his feelings were hurt by being treated so dismissively after seemingly being held in high regard by Nicholas.

John: It's particularly apparent when going up against the likes of Blair and Bruno, but Geoffrey Scott (Sky Rumson) was not the most talented actor to appear on the show. When he was just Angelique's jet-setting husband, his aloofness seemed somehow appropriate. But somehow when he's going toe to toe with these other guys, he leaves a bit to be desired.

Christine: Still, you have to appreciate the way he peppers his dialogue with 'man' and 'baby'. It's pretty rare to hear characters use the parlance of the time.