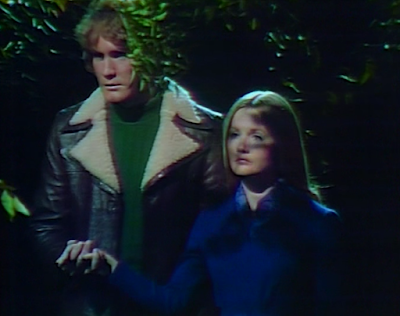 Jeb takes the scepter from Blair, and then calls out to Barnabas. Barnabas appears and grabs Carolyn and runs off with her. Jeb takes the scepter and smashes the Leviathan box. Blair screams at him, and he and Jeb run away from the altar, which begins to crumble. Jeb clutches his abdomen and falls to the ground, writhing in agony. Blair says the Leviathan cause is dead now thanks to Jeb. Jeb gets up, seemingly fine. Blair tells him that he destroyed his Leviathan form, and his body is just a shell. He says his body should have died, too. Blair asks him how long he thinks his will power can keep his body alive. 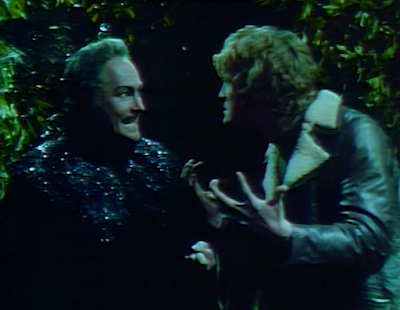 Bruno is at the carriage house carving an apple while sitting next to a zombie. He gets up and goes into Jeb's room, where a fire is burning. He tells the zombie to go get a hose, but it devolves into a skeleton. Bruno wonders what's happening, and runs out to find Blair. 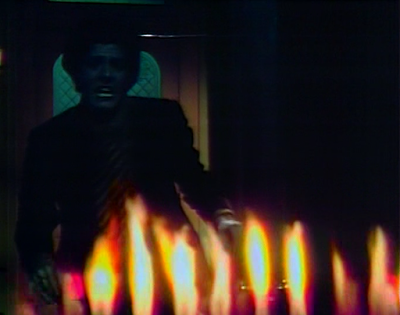 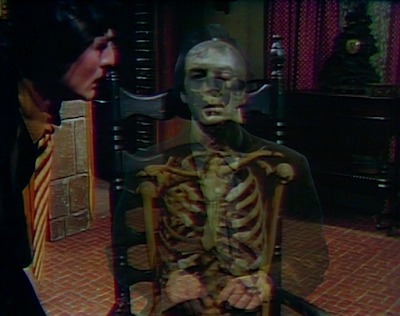 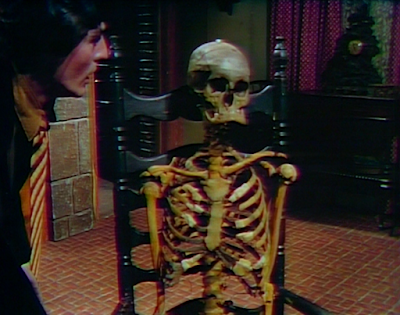 Elizabeth comes downstairs as Barnabas brings Carolyn in. He tells her that she is in a trance, and they help her upstairs. 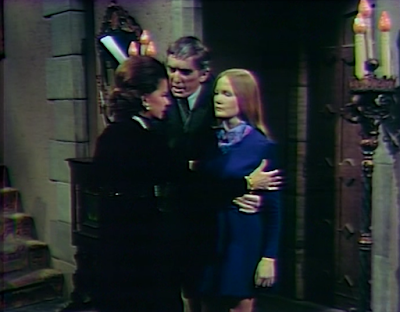 Bruno finds another skeleton in the woods. Blair comes across him and Bruno says that all of their dead have turned into skeletons. Blair tells Bruno that Jeb has destroyed everything. 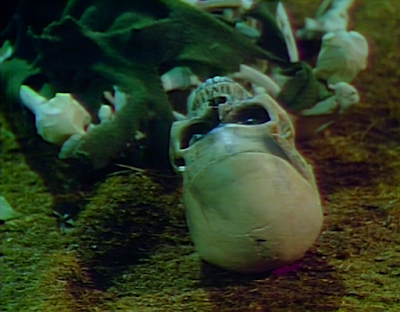 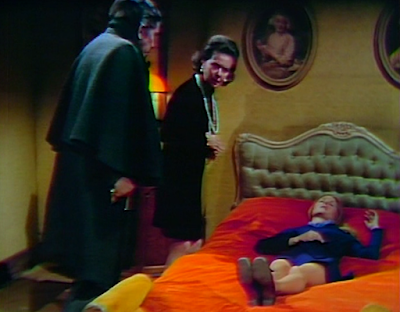 Jeb is outside Collinwood, calling to Carolyn and saying that she's the only one who can save him. 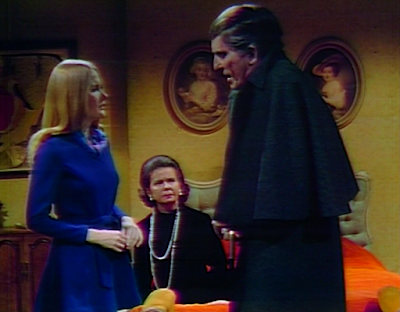 Jeb enters Collinwood, and seeing Barnabas at the top of the stairs, hides in the shadows. After Barnabas leaves, he sneaks upstairs.

Carolyn says there's no answer. Jeb knocks on Carolyn's door and Elizabeth answers it. She asks who let him in, and tells him to let himself out. Jeb says she remembers who he is, but not anything else. Carolyn asks her mother to let him in, and she leaves them alone together. 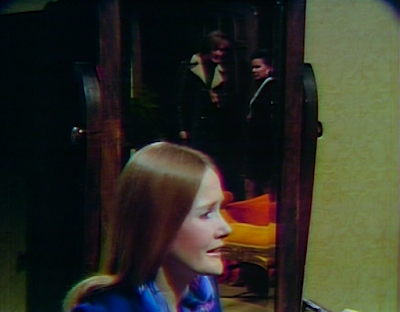 Jeb tells her he doesn't have much time. He says he has to go away, and he wants her to come with him. She says she wants to be with him, but she doesn't understand why they need to go away. He says if she loves him, she can run away with him. He asks for an answer, and she tells him that if she can't get him to stay with her, then she'll go away with him. They kiss. 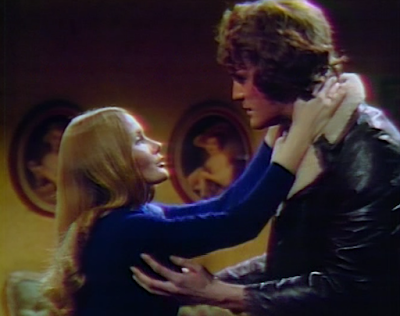 Blair sits, looking into the fireplace. Bruno says the room was completely in flames. Blair tells him that it was no ordinary fire. With one blow, Jeb destroyed everything. Bruno asks what will happen to Jeb. Blair says he should have been destroyed. He thinks he's staying alive through sheer force of will. Bruno says he should die for what he did and Blair assures him that he will. 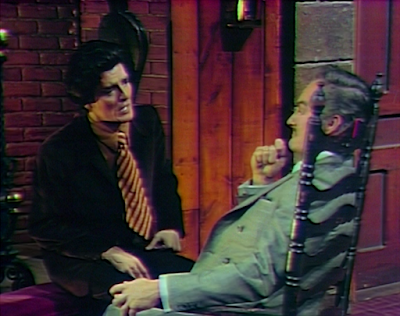 Carolyn writes a letter to her mother, explaining that she's going to marry Jeb and run off with him. She places it in an envelope, and then lies down on her bed. She dreams of Jeb in a suit, and her in a wedding dress. She comes down the main stairs to him. He tells her that everything is ready. She says that soon she'll be Mrs. Jeb Hawkes. They go into the drawing room, where Blair stands with a scepter. She asks why he's there, and Jeb says he's going to perform the ceremony. Blair bids her good evening, and tells her that she looks beautiful. He says they can begin, and Carolyn says they can't begin without her parents. Jeb says her mother doesn't approve and won't be there, and her father is dead. She says she doesn't believe it. Jeb tells her that they will begin the ceremony, and be together very soon. 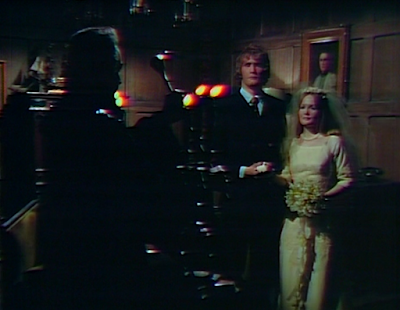 Blair calls upon the Prince of Darkness. Carolyn is frightened by what Blair is doing. Carolyn says she's too frightened to go through with it. Something changes in the room, and Jeb and Blair look around. The drawing room doors swing open, and Carolyn says it's her father. Barnabas steps in out of the shadows and asks Jeb if he's told her who killed her father. Jeb says he doesn't know. Barnabas says that Jeb killed Paul, and demands that he admits it. Carolyn looks at Jeb and realizes that it's true. She tells Jeb to stay away from her. He grabs her throat. 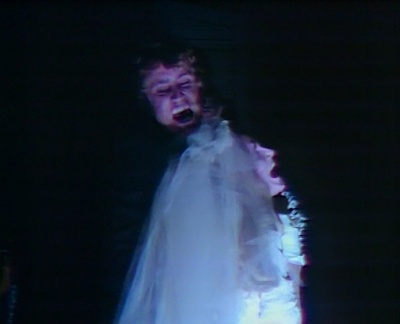 Carolyn wakes up screaming, clutching her own throat. She gets out of bed and leaves her room.

Carolyn finds Jeb in the carriage house. She tells him that she has changed her mind, and can't go with him. He asks why. She says it's hard to explain, and he tells her to try. He gets angry, and when he grabs her shoulders, she starts screaming. 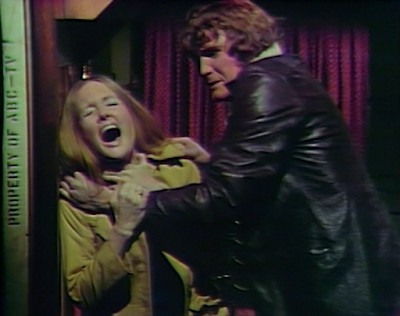 John: So the Leviathan threat is gone... Of course it's convenient that Elizabeth (and by extension, Amy and David) have completely forgotten about it, while Bruno, Blair and Barnabas all remain keenly aware of what has happened. You could argue that Blair makes sense, since he seemingly orchestrated the whole thing, but you would expect that anyone brainwashed into becoming a Leviathan would have forgotten about it completely.

Christine: Don't overthink it, let's just be glad the Leviathan threat has passed and that we survived it! You should at least be pleased to have both resident skeletons appear in one episode, with both the wonky and wide-eyed skeletons standing in for zombies. Funny how there were remnants of clothes on the skeleton in the forest but not on Thomas Findley's skeleton at the carriage house. Nice make up on Thomas Findley's bulging eye today, making it look more disgusting than ever for his last appearance. 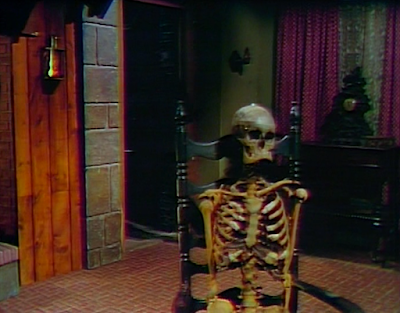 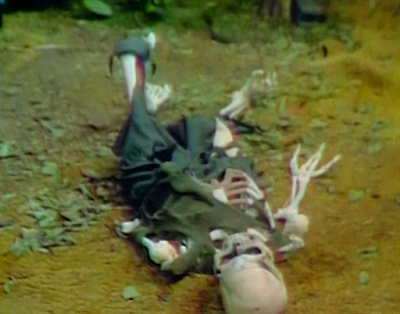 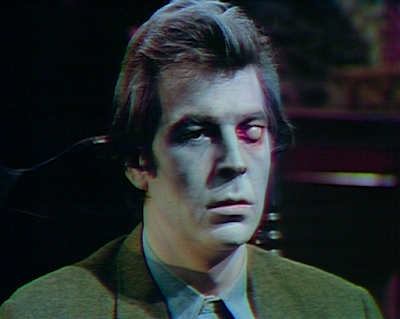 John: I didn't like the idea of Carolyn ending up with a newly rehabilitated Jeb, so I'm glad that he may have to pay the ultimate price for sliming Paul Stoddard to death. I did find it odd that the writers decided not to pay off on Jeb's painful collapse after the destruction of the altar. Maybe it was just something he ate.

Christine: Don't count on Carolyn to suddenly wise up when it comes to Jeb. If she wouldn't believe Quentin when he told her Jeb killed her father, then why would she believe dream Barnabas? She just can't seem to resist his slimeball charm. With all the screaming going on at the end of the episode, I almost didn't notice the "Property of ABC-TV" showing on the edge of the set. 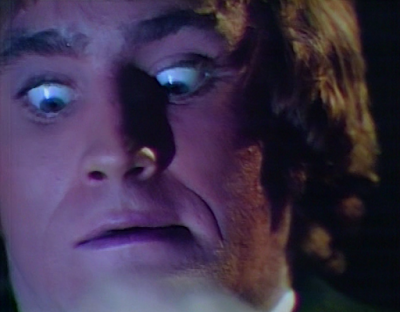 John: Darn! I was really hoping that we'd get a Paul Stoddard cameo at the dream wedding ceremony. I imagine that it's possible we'll get one last Dennis Patrick cameo, but if not, at least the last glimpse we got was the memorable creepy smile in his coffin...

Christine: I was also hoping for Paul Stoddard to show up in the dream, and it was cruel that they set it up for us to expect it. While it was disappointing that Dennis Patrick didn't get to make his last appearance in person, that smiling still was slightly better than the way he went out the first time, when we only got to see his feet, though he was kind of smiling right before that when Barnabas choked him.