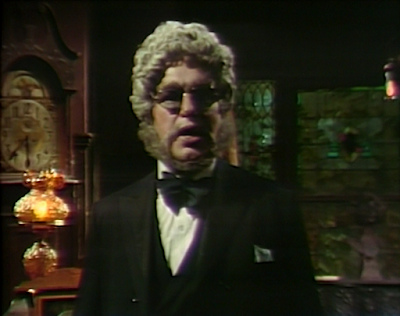 Count Quentin wonders what happened to Julia. He assumes she must have returned to 1969. Kitty comes in and asks what Count Petofi is doing there. He asks her what she wants. She says he caused her being there the other night. He says she was in a trance. She asks him what happened to the woman who lived in the rectory, and he tells her she has been called back to her own time. Kitty asks him again. He tries to convince her that he's Quentin. She says she knows him well enough, based on what he did to her in England. He tries to explain that he doesn't know what she's referring to. He wonders if he might be able to take advantage of her thinking that he is Petofi. 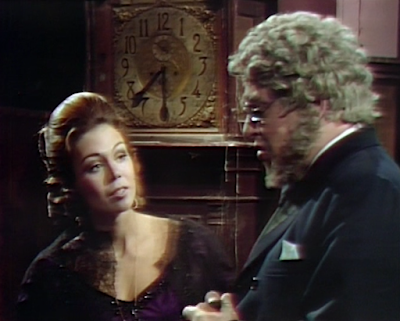 She asks again what he's done with the woman who lived there, and asks if she was an ally or an enemy. She accuses him of being responsible for her strange behavior. He asks her to get something for him. She refuses, and he threatens to make her disappear as well. He shows her his hand and she turns away. He threatens her with it, and she agrees to help him. He says there's a portrait of Quentin in his room at Collinwood. He demands that she bring it to him. They hear a sound, and the lights go out and doors blow open. Kitty hears the music box, and she says she knows who it is, and that he wants them to leave. 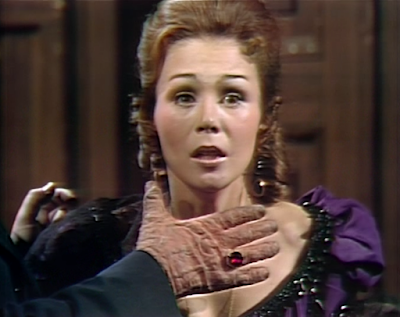 Edward tells Petofi-Q that he'll leave Barnabas' portrait up so as not to upset Kitty. He asks what time the wedding is tomorrow when Kitty bursts in, screaming that the rectory is haunted, and the woman who was living there is gone. Petofi-Q asks what she means, and when she says she disappeared, he leaves. 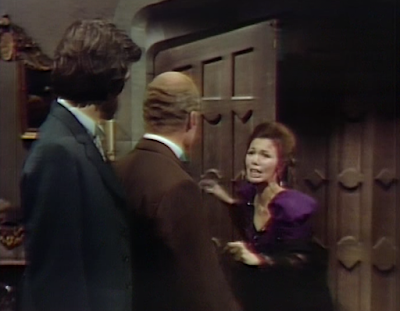 Kitty tells Edward that the curse keeps following her, and begs him to help her. He fixes her a drink and wonders why she went to the rectory. He asks her about the woman living there. She describes her, and Edward says it's the woman Charity found outside. He's shocked to hear that she's been living in the rectory. Kitty tells him that she's somehow involved in the strange things happening to her. 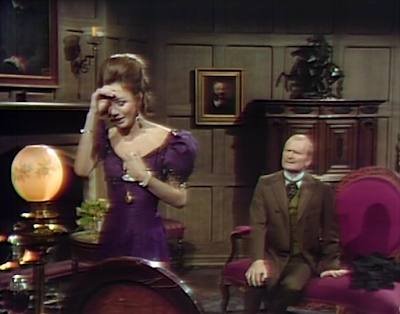 Nora comes in and says Jamison won't play with her. Edward says he'd like to, but he's busy. He tells Kitty he's going to the rectory, and says that she can play checkers with Nora. Edward leaves, and Kitty tells Nora that she often wished she had a girl like her. Nora asks why she didn't, and Kitty says they can't always have what they want when they want. 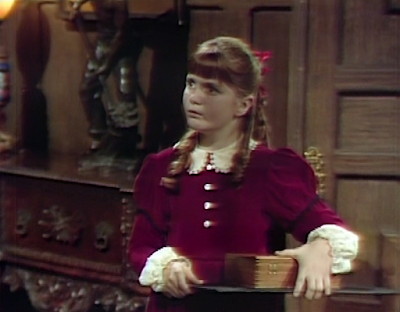 They sit down to play checkers. Kitty asks about Nora's mother, and she responds that she was very pretty. Nora asks Kitty if she's planning to marry her father, and if that's why she wants to be friends. Kitty asks if she wants her father to be happy, and she says she does. 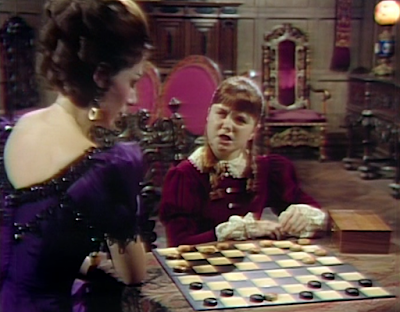 Edward searches the rectory when he runs into Petofi-Q. He accuses him of knowing the woman and being involved with what's going on. Petofi-Q asks if he wants to fight, or search the house to find out what's happening. 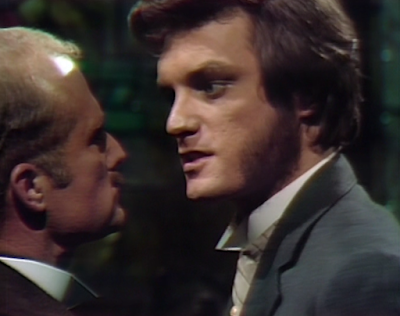 Edward returns to Collinwood and tells Kitty that the rectory was lived in. Kitty tells him that Nora is a dear child, and they're going to be good friends. He says Nora needs someone like Kitty. 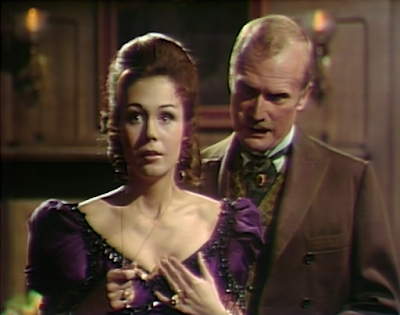 Petofi-Q and Count Petofi are both in the rectory. Count Petofi tells him that he can kill him, and Petofi-Q says that would be a strange suicide. He says he knows he was looking for Julia's help, and he's not going to get it now that she's gone. He says she's quite happily returned to her own time. She says whatever she was doing since Barnabas was killed was unfinished. Petofi-Q asks if he knows what that was. He asks Count Quentin if he's going to have to force him to leave. Petofi-Q says he's nothing but a raving-mad senile old man, and sends him away. 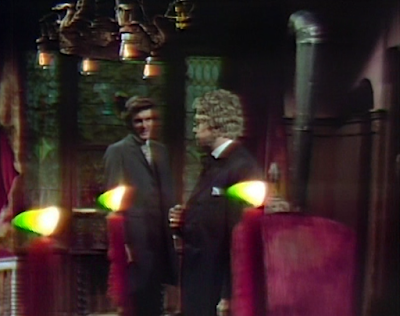 Edward asks Nora if she enjoyed her game with Kitty, and she says they never finished. Kitty comes in and offers to finish the game when Edward tells her it's time for bed. He tells her to say goodnight to Lady Hampshire, and when Kitty asks Nora to call her Kitty, Nora says, "Goodnight, Lady Hampshire." She leaves, and Kitty excuses her self.

Petofi-Q continues to search the rectory.

Kitty finds the portrait in Quentin's room. She lifts up the cover to find the frame is empty. She searches the closet when a hand grabs her shoulder. 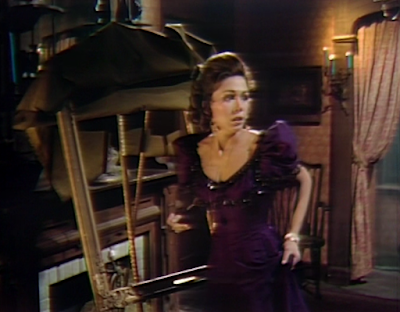 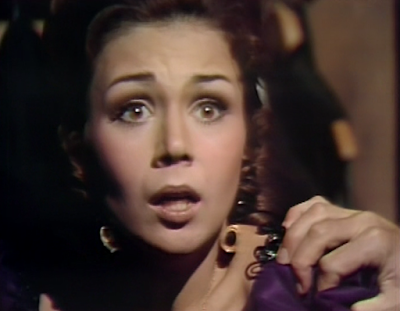 John: So Quentin started to wise up, realizing that he can use Petofi's body to his advantage... although at some point it will become clear that he's only capable of idle threats...

Christine: Idle threats should be able to carry him for a while, especially while he still carries the grotesque Hand.

John: Why was Nora being such a brat? And if Kitty had been paying attention, she might have realized the child was cheating at checkers. Kitty makes one move, and Nora takes three of her pieces with a definitely illegal move. 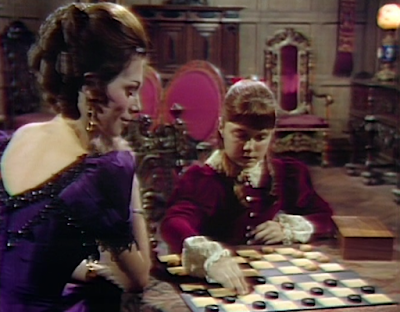 Christine: Not only that, but she made two moves before grabbing 3 pieces after only making one jump. I think Nora knew Kitty didn't really know how to play and was taking advantage. She's being a brat because she knows Kitty wants to marry her dad and is only being nice to her to help further that goal. 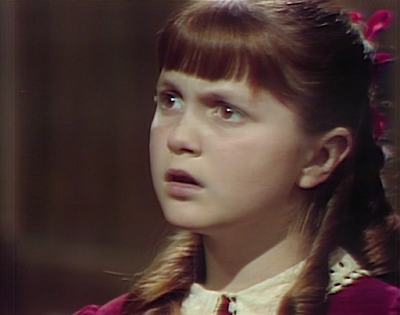 John: I'm anxious to see the current state of Quentin's portrait! Does it reflect his body, or his mind...

Christine: I don't understand why Quentin would send Kitty to his room to get the portrait when he had a violent throwdown with Tate to get it back in Episode 850, and Petofi showed him he had it in his lair in Episode 854. Was he expecting that Petofi-Q moved it back to his room since he's occupying it now? Wouldn't it be safer at the mill, especially if the portrait is transforming to reflect Quentin's current state? Be sure to stay on top of the changes to Quentin's portrait in the Works of Charles Delaware Tate Gallery.


Down for the Count:
Barnabas was staked in his coffin 13 episodes ago. 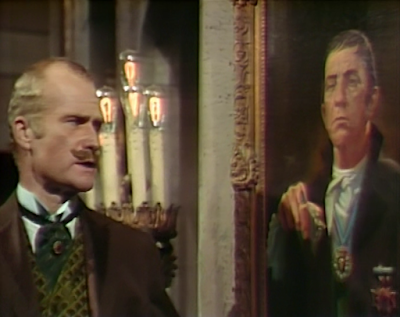