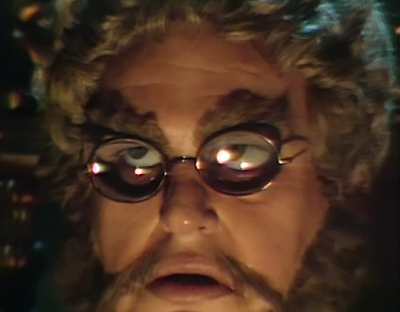 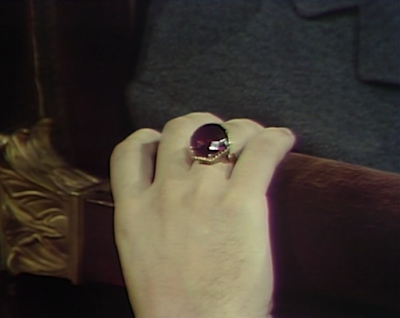 Beth hears Quentin's voice saying he loves her, but has no choice. Then she hears Aristede, Magda, and Quentin... She screams and Aristede tells her to be quiet. She says she still loves him, and he can't take him from her. She runs out past Aristede, who says she'll ruin everything. 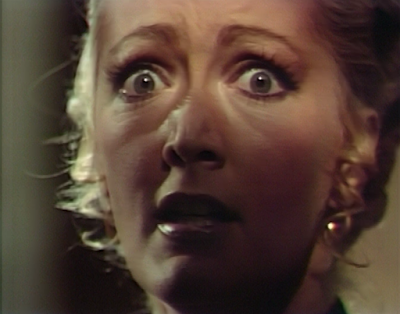 Beth finds Quentin passed out in the drawing room of Collinwood and tries to wake him. She wonders if she's too late.

Petofi comes out of his trance and holds his head. He stumbles around the room before collapsing.

Quentin comes to and Beth tells him she's so glad Petofi had not succeeded. He tells her he's all right. She says that Count Petofi was trying to do something hideous to him. Quentin asks if she knows what he was trying to do. She says she didn't, but Aristede said it was the worst thing that could happen to a human being. She says Petofi is an evil foul man, and she hates him. He kisses Beth, and tells her to meet him at the cottage later, after he's met with Angelique. She tells him she loves him, and he leaves to find Angelique. 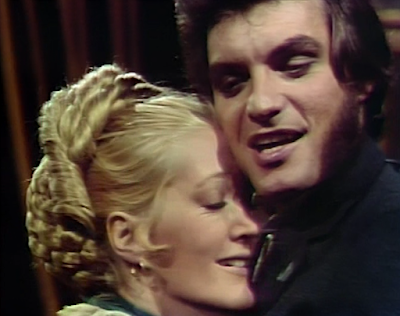 Magda is in the woods when she hears a rustling. She sees Quentin and asks if he's alright, because she's worried about him. She tells him she came to see Petofi. He says he feels like a new man, and he's on his way to see Petofi. He shows her the ring, saying he's going to return it. She warns him that something bad is happening, and begs him not to go see Petofi. He tells her he's not afraid of Petofi anymore. 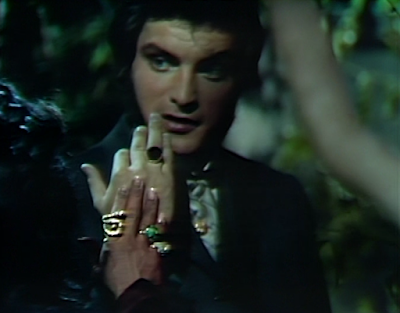 Petofi comes to and starts to get up. He can't see well, as his glasses fell off. He hears someone come in, and asks who it is. He demands to know who it is, and where he's at. Aristede hands him his glasses. He puts them on, and asks how he got there. He grabs Aristede, but notices his hand. He asks to see a mirror. Aristede says there's no mirror around. He demands to know what he's done. Quentin laughs, and says they must get him a mirror. He hands him one and Petofi looks into it. Quentin says he's making the transition with ease, and then tells Quentin that their minds and bodies have swapped. Quentin (in Petofi) asks why. Petofi (in Quentin) says his body is the key to getting to the future. He says he needed a host body that would be waiting in the future. He tells Quentin that he is alive in 1969. He says that Tate's portrait not only ended his curse, it gave him immortality. 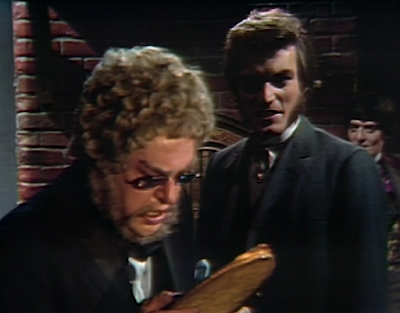 Quentin calls Petofi a monster. Petofi tells Quentin that now he is Count Petofi. Aristede confirms it. Petofi says he can try and convince people, but they'll believe he's mad. Quentin reminds him of the power of his hand, and he grabs Petofi's throat. Petofi tells him that he didn't leave the power of the hand in his old body. He then says that his ring has served its purpose, and he puts it on Quentin's withered hand. 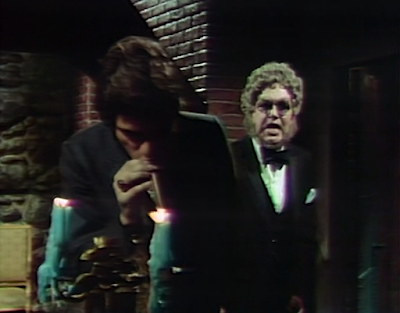 Aristede takes the glasses from Quentin, so he can't see. Quentin stumbles around the room after him. Petofi tells Quentin not to interfere with his plans. Quentin tells him to go ahead and kill him. Petofi says he can't do that, as his old body is also part of his plans. He hands him back his glasses. 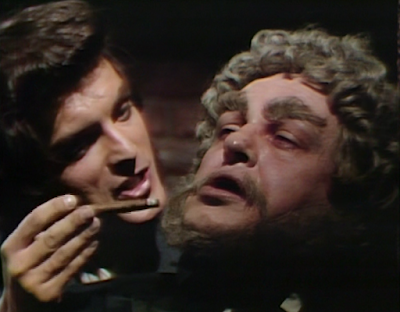 Quentin, in Petofi's body, leaves. He encounters Magda in the woods. She asks what he did to Quentin, and he says he is Quentin. He explains that Petofi swapped their minds. She says she knows he's Petofi. He tries to convince her, but she runs away from him. 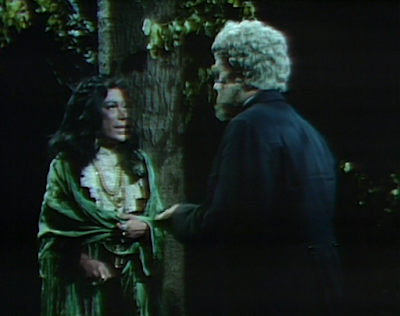 Petofi, in Quentin's body, asks Aristede if his display of power impressed him. Aristede asks how he fits into his plans. He tells him he will gain the sight when the time comes. He tells Aristede to come with him, as they have things to do. 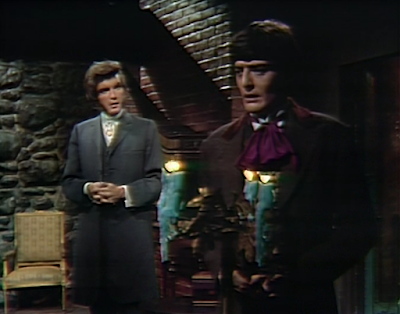 Quentin, in Petofi's body, returns to Collinwood. He realizes that no one will believe him. He decides that he must go somewhere else.

Beth arrives at the cottage to meet Quentin. Quentin, in Petofi's body, comes out and tells her she can't leave. He says he needs her. Petofi, in Quentin's body, arrives. Beth begs the man she thinks is Quentin to protect her. The man who looks like Petofi tries to convince Beth that their minds and bodies have been switched. 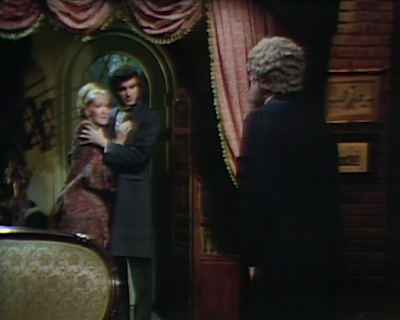 Petofi, in Quentin's body, tells Beth that Petofi has gone insane. He says Petofi has lost his powers, and the Count Petofi they have known is gone. He escorts Beth out as Quentin, in Petofi's body, shouts that he is Quentin. 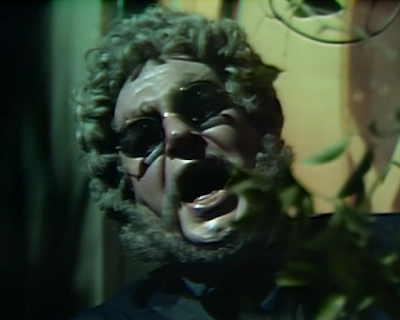 John: Did anyone else think Petofi may have accidentally swapped places with Charles Tate when he got up holding his head? 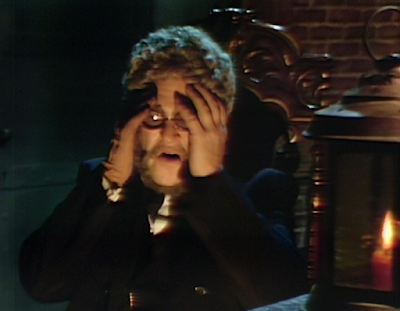 Christine: He doesn't have quite the same intensity, though I thought the way Petofi as Quentin nearly chomped off Beth's head was very Tate-like. If Beth only knew. Blech! 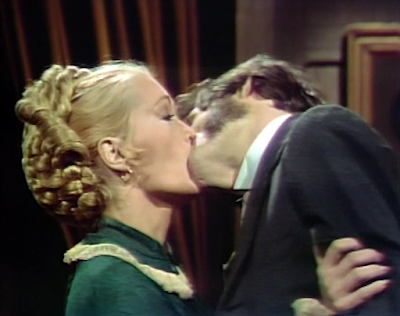 Christine: I'll be interested to know if he bought that pumpkin orange shirt as Quentin or as Petofi in Quentin. I'm guessing the latter.


John: I need to figure out a new shorthand for describing Quentin and Petofi, or these summaries are going to be very confusing...

Christine: Quentofi and Petofin? What a horrifying turn of events! Quentin's vanity is probably suffering the most. Even if he were able to come up with some bit of information to prove he was Quentin, it's likely that nobody would believe him anyway, thinking that the all-knowing Petofi was using his unlimited powers to trick them. It seems inexplicable that he would retain the power of the Hand without it, but it has already been established that Petofi can do anything. Truly this scenario is most frightening for the ladies of Collinsport should Petofi decide to go on a tear with Quentin's good looks and womanizing ways. 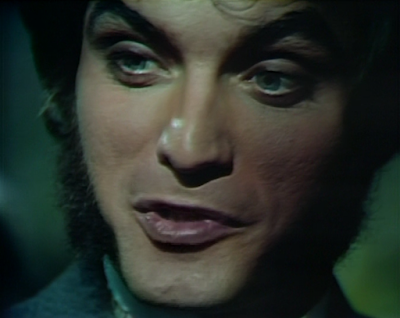 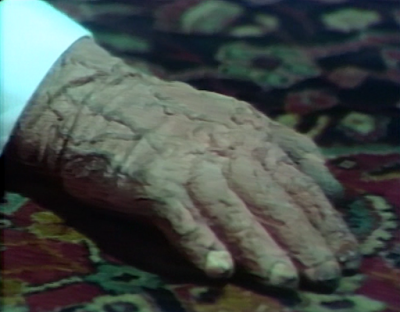 Down for the Count:
Barnabas was staked in his coffin 10 episodes ago.
Posted by John Scoleri at 6:00 AM