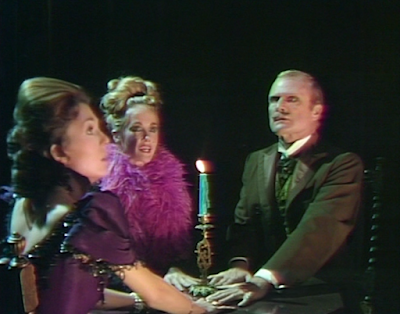 At midnight, Charity tells Kitty have a seance. Charity asks for a sign. There is a knock on the drawing room door. Charity says someone is there. Charity says they must not break contact. The drawing room doors open, and Kitty points out a hooded figure in the doorway. Edward asks who it is. He's shocked to see that it's Judith. He sits her down and goes to call a doctor. Judith looks at Charity, and asks what has happened to her. Charity says her name is Pansy, and she hasn't changed since the day Carl brought her to the house. Edward returns and asks to be alone with Judith. Kitty brings smelling salts, and Edward tells her that he'll introduce her to Judith later. 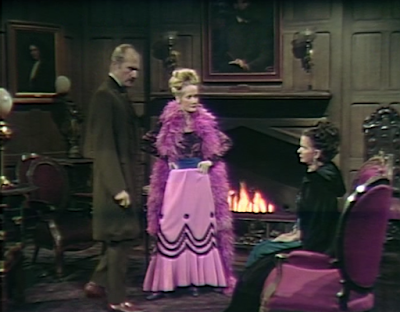 Charity tells Kitty that Judith will be fine with her because she has a title and lots of money. She then apologizes that they didn't learn more from the seance, and suggests they can try again in the future. 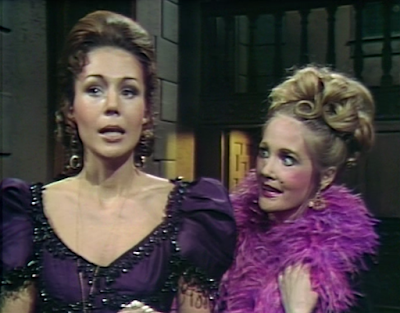 Judith tells Edward that she's fine. She says the doctors decided she was well enough to leave this afternoon. She asks if he was counting on her being away longer. He explains that he wishes she hadn't needed to go to the sanitarium. She asks to see Gregory, and he says that Trask went to see her yesterday. He assumed he had brought her back. She explains that he never visited her in the sanitarium. Edward says he went once a week to see her, and stayed overnight. She denies that ever happened. Edward suggests that she may not have been in her right mind. He asks why she never told him, and she says she was embarrassed. She says that she will speak to him. Edward adds that the family is no longer in danger from Barnabas, noting that he is dead. 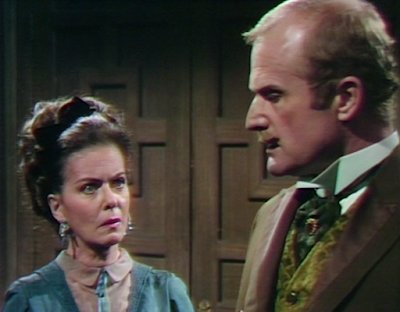 Count Quentin arrives and finds Kitty looking at Barnabas' portrait. He asks her about Quentin's portrait. She says she was caught be Edward. She says they must be quiet because Edward is in the drawing room with Judith. She says she can't get the portrait out of the room, and goes upstairs. He wonders if Judith could be his answer, but then decides that she wouldn't believe what has happened to him. 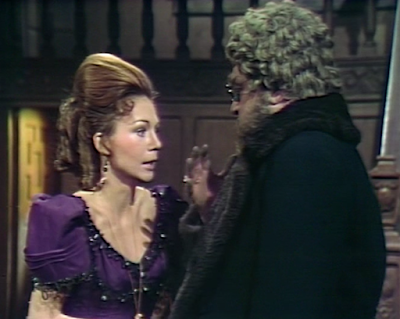 Kitty returns to her room. She finds a note on her dresser saying, "Know yourself. Be who you must be." She then hears the music box, which she sees on her desk. She goes to a hope chest at the end of her bed and opens it. She removes a white dress and sees flashes of Barnabas' portrait. 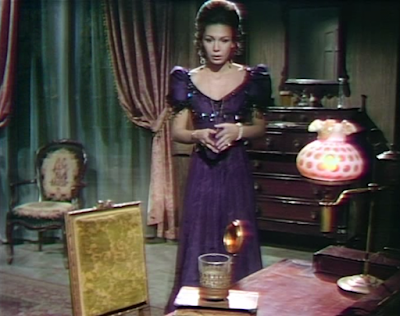 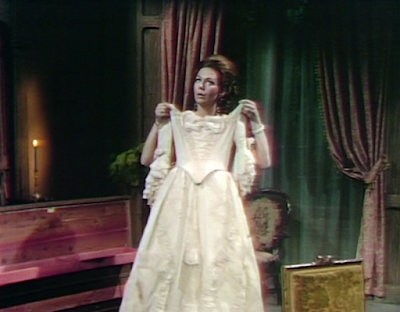 Judith asks Edward about Charity's state. He suggests that it may be a spell Barnabas placed on her. She tells him to get her, saying that she will succeed with her where everyone else has failed. Charity comes in, asking what Judith wants. She says she plans to be a good and proper wife to her father, Mr. Trask. She tells Charity that she can't live in town any more, and that she'll send someone to gather her things. She asks how her god-fearing mother would feel about her. Charity asks why she wants to do this for her. She says she told Carl it was such a beautiful house. She agrees to come live there. 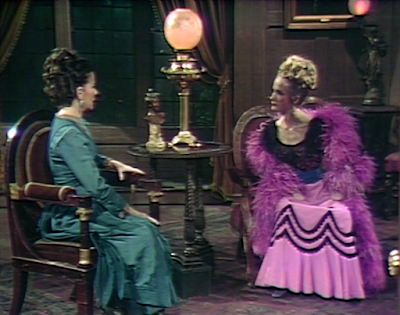 Edward goes to Kitty's room, but she doesn't answer his knocks on the door. After he leaves, she comes out wearing the white dress. 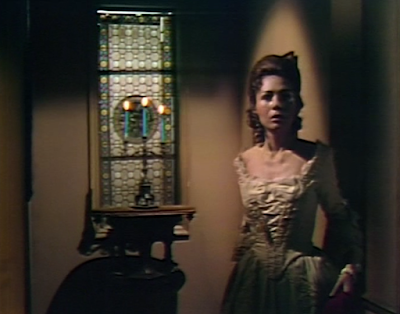 Count Quentin goes into the drawing room and introduces himself to Judith as Count Petofi. He asks if they have met before, and she says she doesn't believe so. He tells her that he has minor psychic powers. He takes her hand, and describes a child in the house with a governess. He says the child bit the governess, and Judith said an incident like that did transpire. 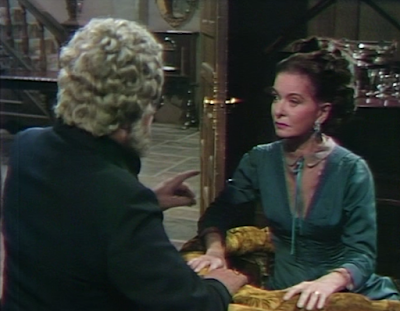 Edward goes into Kitty's open room and finds the note on her dresser. 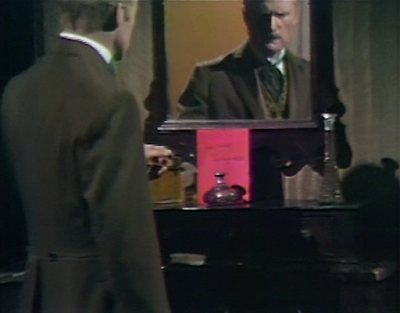 Count Quentin continues to tell Judith things that no one outside the family could know. She finds him extraordinary. She says he should feel at home any time he's in Collinwood.

Kitty comes downstairs. Count Petofi sees her and asks if she has met Edward's sister. She says, "He is waiting for me. I must go to him," and goes outside. Judith asks who she is. Count Quentin explains that her late husband was one of Edward's great friends. He says he should go after her to ensure she's alright. 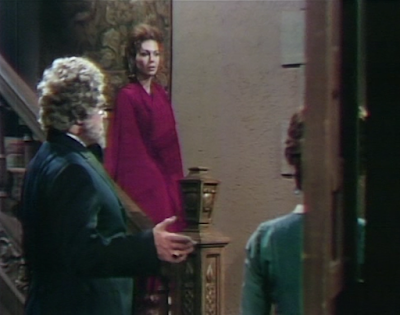 In the woods, Kitty says she has come to see him one more time. She asks him to come to her. A bandage wrapped ghost appears—Jeremiah Collins! 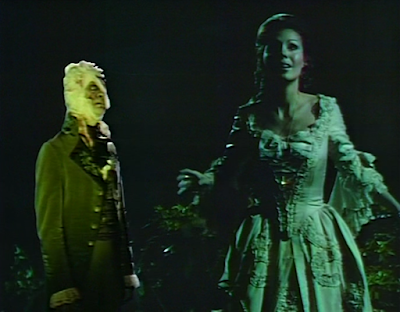 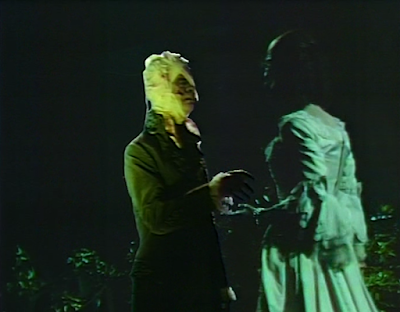 John: It's almost a shame that they had Joan Bennett read today's intro, as it pretty much telegraphed that Judith would be the hooded figure interrupting the seance. 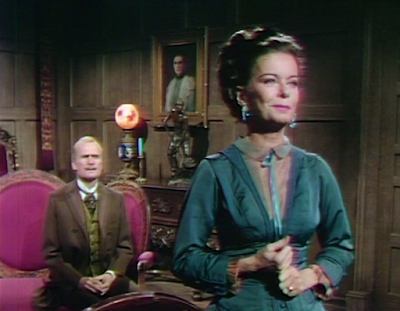 Christine: On the other hand, it let us know right away we could look forward to our beloved matriarch being back in the house! Now if she would only give Stinky Trask the what for! While Judith claimed she was in the sanitarium for four months, Joan Bennett last appeared in Episode 791.

John: So if Trask hasn't been visiting Judith these past few months, just where has he been spending his nights? Sounds like his stay in Collinwood, and certainly as head of the family, will soon be coming to an end.

Christine: I think he was probably out saving vulnerable, young female souls, much like he wanted to do for Amanda.

John: Who would have thought that we'd ever see the cheesy, partially-bandaged ghost of Jeremiah Collins ever again! I have to admit, I never would have guessed that he was the one who would appear to her.

Christine: He certainly was a surprise! Can we assume that he was the entity about to make himself known at the séance? Timothy Gordon reprises his role as the ghost of Jeremiah for the last time today and tomorrow. Let's take a moment to honor the man with the hand that strangled Willie Loomis when Barnabas' coffin was unchained in Episode 210.


Down for the Count:
Barnabas was staked in his coffin 15 episodes ago. 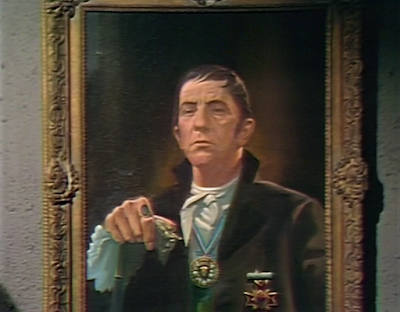