Tate tells Petofi-Q that he is in the drawing room at Collinwood. The people are different. He describes a little boy and girl, and a woman named Julia, who is holding a newspaper. Petofi-Q asks the date on the newspaper, and Tate says it's October 28, 1969. Petofi-Q scatters the wands. He says he has found the right hexagram, and he knows the way to the future, and nothing can stop him now. 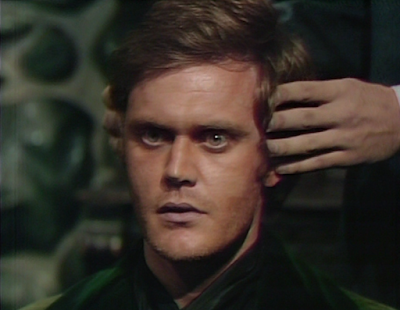 Beth comes to see Petofi-Q. He explains that he's been busy. She sees that he's packing, and asks if he would have seen her before he left. He tells her that she's going to follow him. She says she's sure he says the same things to Anelique. She sees jewels, and accuses him of stealing them. Petofi-Q says they're Petofi's. He tells her he found the hexagram that will allow him to escape to the future. He says they'll be safe from Angelique and Petofi in 1969. She's surprised to hear that he plans to take her. 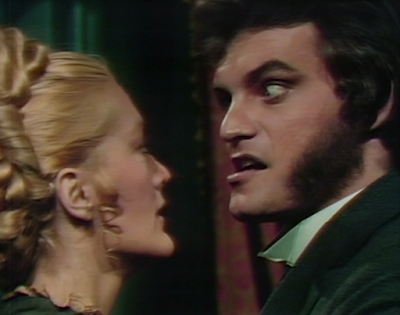 He says he'll go first, and after he disappears, she can join him. He sends her into town to cash a check. Petofi-Q rolls up the portrait, saying he needs to take it with him to ensure no one destroys it. She asks how he'll get it. He says he'll bury it now, and dig it up in the future. 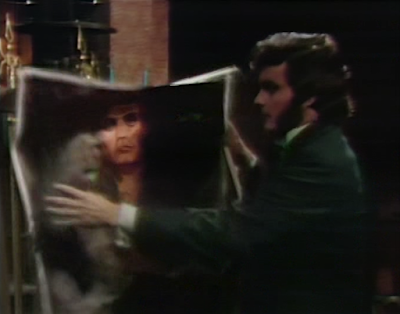 Tate arrives at Collinwood, and looks around, realizing how different it looked in his vision. He walks into the drawing room and finds Charity. She tells him that she's Pansy. She asks what's wrong with him, and he tells her that he's seen the future. She tells him that she has second sight, but she doesn't let it phase her. He says that Quentin is going to go to the future, but he won't let him. He runs upstairs. 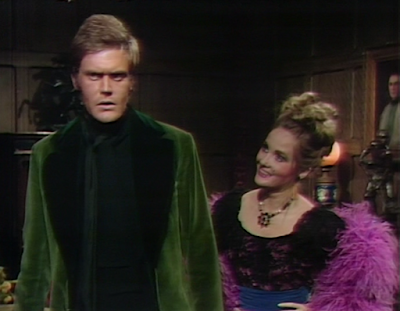 Barnabas sees this and asks Charity what's wrong with Tate. He then says he understands her concern with him, and explains that he too was a victim of the vampire. She points out that Tate said Quentin was going to the future. Barnabas is intrigued. 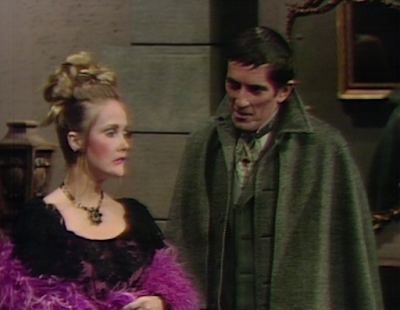 Petofi-Q rolls up Quentin's portrait when Tate pounds on his door. Tate tells Petofi-Q that he's not going to go. He says that he found his way to the future because of him, and he owes him his talent back. Petofi-Q refuses to help him. He tells Tate that he has choices. He could become successful in something else. Tate grabs the portrait, and Petofi-Q tells him to put it down. Petofi-Q threatens him with his hand. 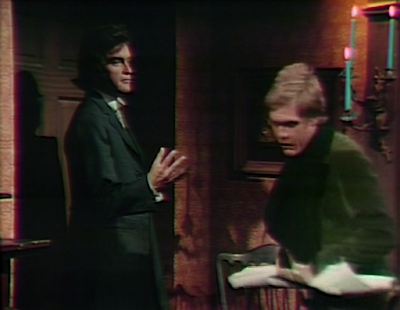 Charity asks Barnabas why he's taking Quentin's going to the future seriously. Barnabas whispers a secret to her.

Petofi-Q has subdued Tate. He tells him that he would have restored his talent, but he doesn't do favors for enemies. He sends Tate on his way, and he leaves, obediently. 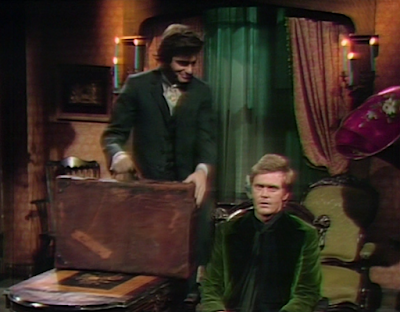 Charity walks in and asks what Petofi-Q did. She tells him that she knows his secret. He starts to threaten her, and she reminds him that it's his birthday, and she's here to remind him. She offers him a drink and he agrees, saying that he's in a hurry. They go downstairs. 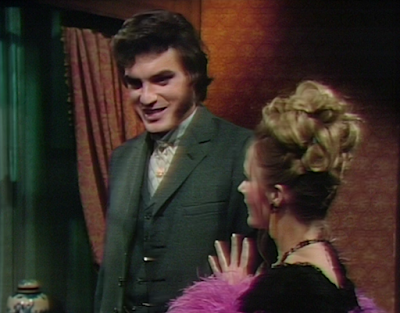 Beth returns to Collinwood as Petofi-Q and Charity come downstairs. Charity goes into the drawing room, and Petofi-Q tells Beth to take the money she got and bury it in the suitcase where he designated on the map. He then tells her to return to the house and wait with his body until it disappears. Then she can use the 49th hexagram to join him. 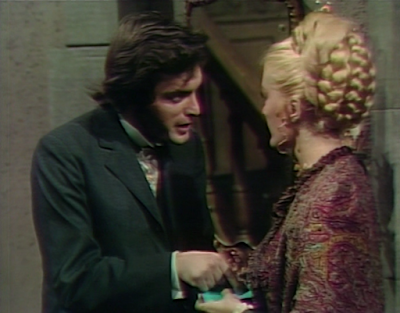 Barnabas sneaks into Quentin's room. He sees the empty frame where the portrait once was. He pokes around until he hears steps outside the door. He hides in the shadows when Beth enters. She takes a suitcase and leaves. Barnabas follows her. 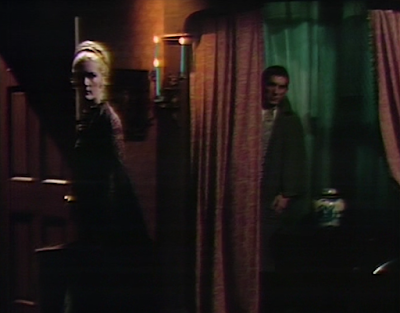 Charity pours two glasses of champagne. Petofi-Q toasts the future. He sees Beth leave the house with the suitcase, followed by Barnabas. Petofi-Q offers Barnabas a drink, but he declines and leaves the house. 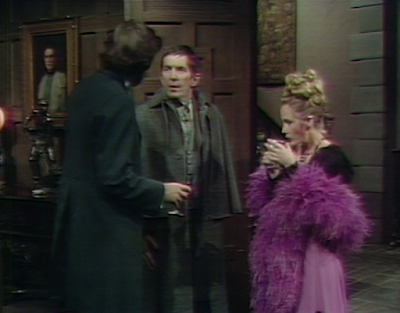 Barnabas tries to find where Beth went with the suitcase.

Barnabas returns to the drawing room and asks Charity where Quentin is, and if Beth had come back. She says no one has come or gone. He realizes that Petofi-Q must be in the house somewhere.

Petofi-Q has laid out the 49th hexagram. He closes his eyes. He sees a door with the matching hexagram, and gets up and walks through it. He finds himself in the drawing room. He calls for Edward and Judith. He finds proof that he's in 1969, and revels in his success. 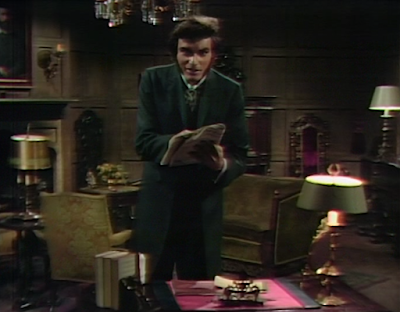 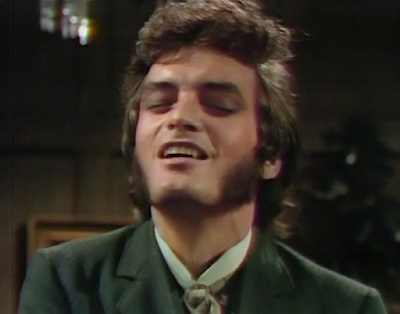 John: What secret do you think Barnabas whispered to Charity? Do you think he was telling her about Quentin's Birthday?

Christine: I'm pretty sure he said, "I am the walrus, goo goo g'joob." 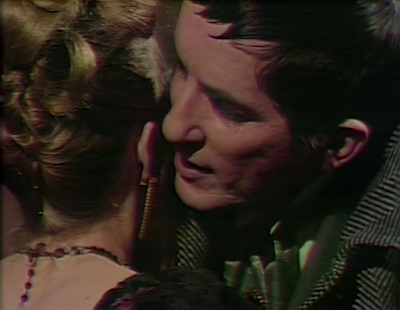 John: So it does look like they can just lay out the hexagram of choice, as opposed to having to toss the I Ching wands to get a natural '49.'

Christine: We don't necessarily know that. He could have been tossing wands the whole time Charity was draining the bottle of champagne and Barnabas was being unsuccessful at finding Beth digging a big hole on the grounds. I'd prefer to think that's what he was doing anyway: "48! What the devil! So close! I'll try again..." 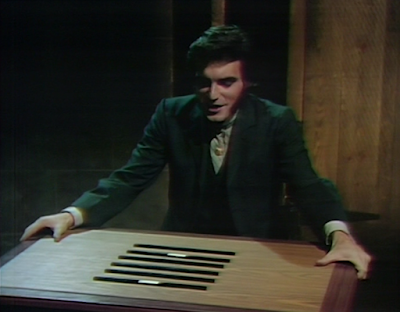 John: How soon do you think Petofi-Q will regret putting Beth in charge of burying the suitcase with the things he wanted access to in the future? And didn't it seem like he gave her the only copy of the map so she'd know where to bury it?

Christine: I think he will regret his decision quite soon. He really should have known better, but he was so excited about going to the future that he didn't seem to be thinking clearly, though I think we can assume he made an extra copy of the map. I'm hoping she buried the suitcase somewhere else in case he didn't bring her along as promised. Incidentally, that canvas looks an awful lot like a poster to me. I loved the way Tate slapped Petofi-Q with it. 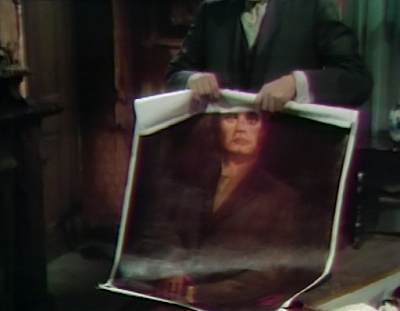 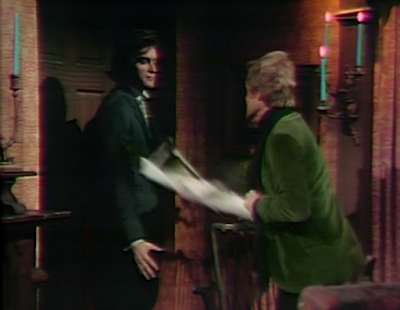