Aristede is unconscious outside the cave when someone approaches him. He comes to and finds  Barnabas Collins standing over him, begging him for help. Aristede gets up and runs off, and Barnabas drops to his knees. 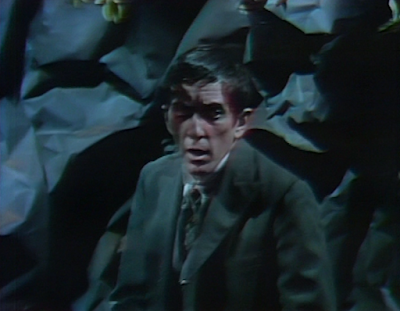 Petofi-Q is listening to music in the drawing room, but not his theme, when Edward walks in. Edward says Kitty remembers nothing but an overwhelming sens of loss. Petofi-Q says he thinks he knows why. He tells Edward that he has been reading the diary of Ben Stokes, a servant of Barnabas Collins in the 18th century. Edward is sure Barnabas has nothing to do with Kitty. 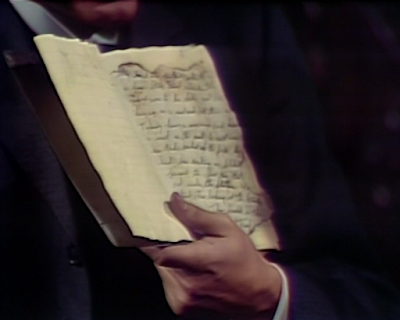 Petofi-Q describes how Barnabas was in love with a woman named Josette. He goes on to say that Kitty is reliving the thwarted romance, and occasionally becomes Josette. Edward tells him that Kitty is grieving for her dead husband Jerome. Petofi-Q says he understands that Kitty is what Edward needs, but Josette is something that none of them need. He suggests that if Josette becomes stronger, Kitty will grow weaker, and could die. Edward threatens to throw Petofi-Q out of the house if he says anything to Kitty. 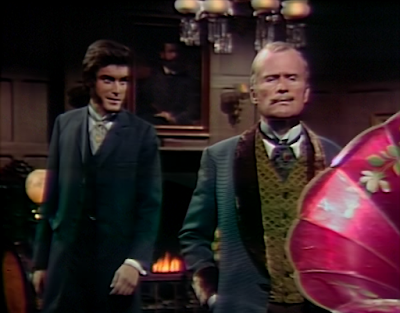 Edward goes upstairs, and a call comes in for him Petofi-Q asks what the man wants. He says he's a doctor, and a sick man stumbled into his office asking for Edward Collins. Petofi-Q says he'll be there to take care of the matter immediately. He gets off the phone and loads a revolver with silver bullets. 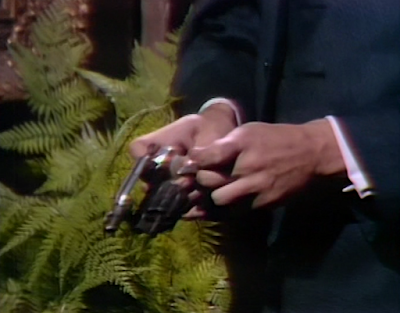 The doctor stands over an unconscious Barnabas when Petofi-Q arrives. He's shocked to see Barnabas. The doctor asks if he knows him, and Petofi-Q tells him to leave them alone. The doctor tells him that no one tells him what to do in his office. Barnabas wakes and asks how he got there. He asks Petofi-Q if he's Edward. Petofi-Q again tells the doctor to leave, and he does so reluctantly. 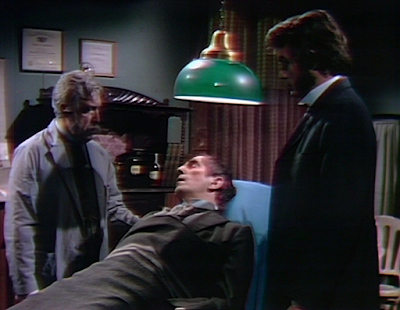 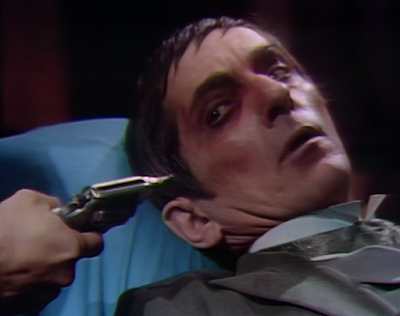 Edward arrives at the doctor's office and is shocked to see Barnabas. The doctor asks who he is, and Edward explains that he's a distant relative they didn't expect to see again. He asks the doctor to leave them, and for Edward, he does so willingly. 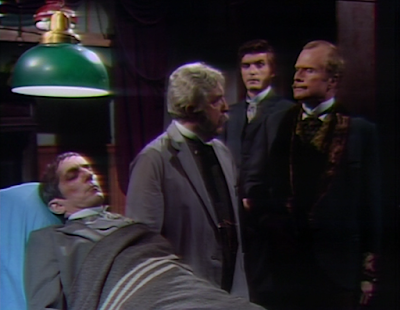 Edward tells Petofi-Q that they know what they must do. Petofi-Q once again puts the gun at his head. Barnabas asks why he's doing that, saying he's a stranger. He asks how they could know anything about him. He says he came from England. He says he's never seen either of them before. Petofi-Q prepares to shoot him and Edward stops him. He says the doctor will hear the shot, but if they wait until dawn, they can prove to the doctor that he is not as innocent as he claims. 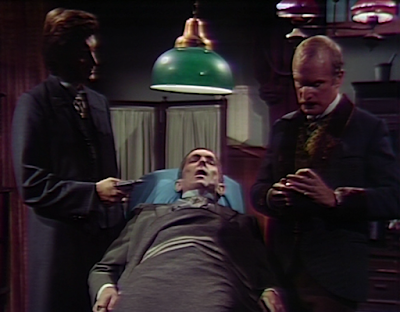 The sun rises, and nothing happens to Barnabas. Edward says if he has lived through dawn, he's not the man they thought he was. Edward asks him his name, and he says his name is Barnabas. He says his ancestors came from Collinsport, and he has returned from England. He says he read of the family while he was in Boston, and he came to Collinsport to find Edward. 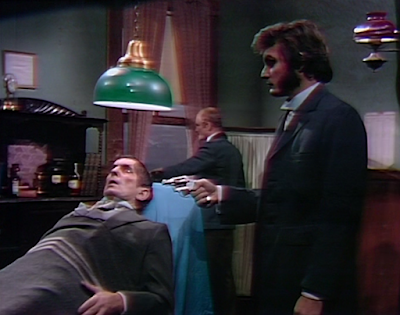 He says he met a man in the woods who looked exactly like him. He says there was a terrible cruelty in his face, and the man tried to destroy him by putting him under a spell. He says the man came to him from time to time with bared fangs. Petofi-Q says it's a trick, noting there are no marks on his neck. Barnabas says that it must be true that the man is finished with him. Edward tells Barnabas that the man is dead. Petofi-Q pulls Edward aside and says he doesn't trust him. Petofi-Q wants to shoot him. Edward says they can go to the cave together to see if Barnabas the vampire is still lying in his coffin with a stake in his heart. They help Barnabas up, and the doctor returns, telling them the man may not live through what they're planning. He tells them that no matter what happens, he's no longer responsible. They leave. 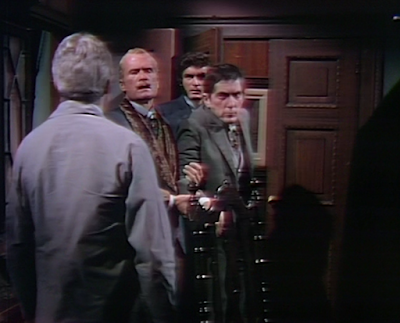 They arrive at the cave, and Petofi-Q goes in first. He calls for Aristede, but he's not present. Edward comes in and they see the chains off the coffin. Edward tells him to put the gun to Barnabas' heart, and tells him to fire if the coffin is empty. He opens the coffin and Barnabas is still lying inside with a stake in his heart. Barnabas looks at the dead vampire and says, "it's him," before collapsing. 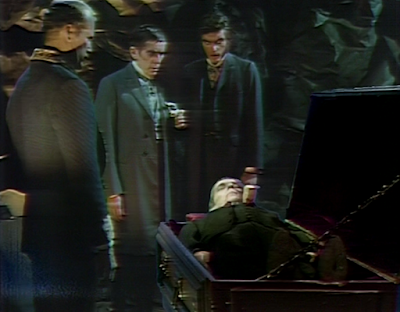 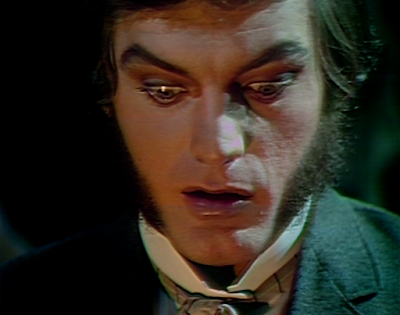 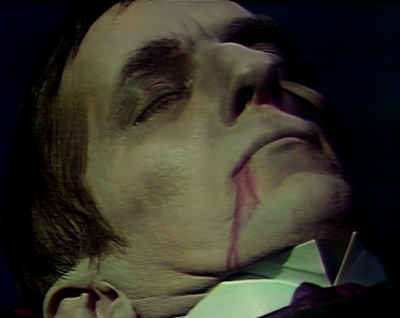 John: Fake Barnabas? Or alternate Barnabas? Pretty cool direction for the story to take! My money is on cloned Barnabas thanks to the brilliant work of Julia Hoffman and Angelique. And most importantly, should we bring back the staked Barnabas counter?

Christine: Perhaps we should, considering that he remains staked in his coffin. I still think it's a doppelgänger that Angelique created through magicking a mirror, as she did for herself.

John: Gotta love the doctor who goes from a willingness to die to protect Barnabas to being glad to be rid of the whole mess in a mere matter of minutes.

Christine: I also enjoyed his you-can't-tell-me-what-to-do attitude, right before he does what he's told to do. This is the only appearance Alfred Hinckley makes as the brave Dr. Reade, however, it's interesting to note that he also appeared as the train conductor in Episode 1. 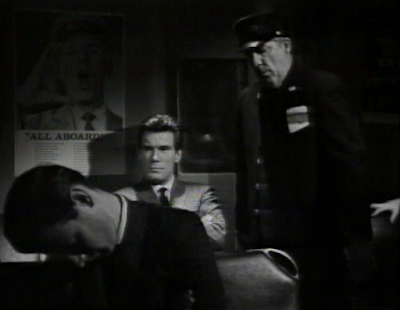 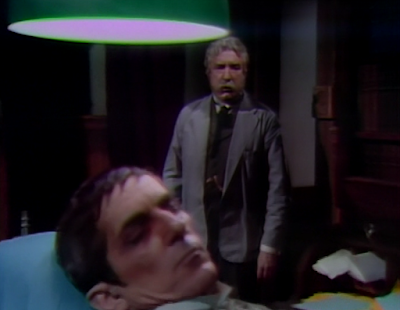 John: This certainly is an interesting development. Of course even if my assumption on the new Barnabas' origin is correct, the question remains—is Barnabas 'acting' as a confused relative from across the pond, or is he just play-acting the role he's already played in the future, now in the past, to fool his relatives?

Christine: I think Barnabas is doing a stellar job of acting the part of vampire victim in order to shed his vampire identity and be welcomed back into the bosom of the family, though it could be possible that the doppelgänger Angelique created was like a newborn with few memories of his past existence attached. Either way, it will be interesting to see how this situation is explained. 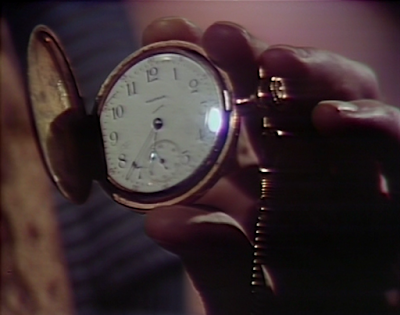 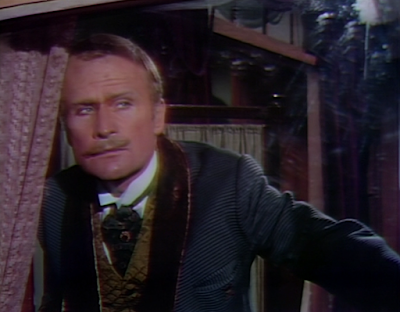 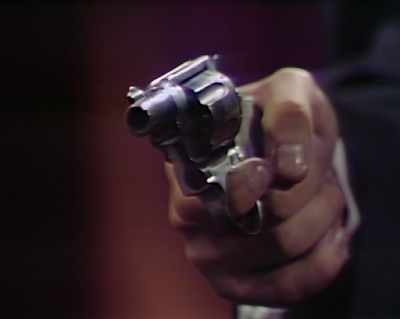