Kitty tosses and turns in bed, having a nightmare. She sees Angelique, who says she will give her something so that she will never forget him. A boquet and a book of poetry. She says it's her favorite, and opens it to read a poem. Angelique tells her that everything is so beautiful, but the mademoiselle should be careful, as too much good fortune will make the gods jealous of her. 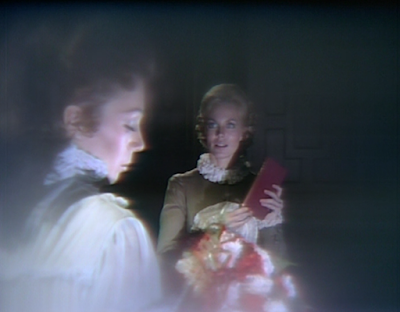 Kitty sits up in bed, confused. She sees the flowers and book on the table. She realizes that it's not all in her mind. She picks up the book and says that something is really happening.

Kitty interrogates Quentin about Angelique. She asks if she's ever been to England, because she's sure they met before. Angelique walks in and tells her that she's never been to England. Kitty asks her if she's ever been a servant. Angelique tells Quentin to explain to Kitty that he's not marrying below his status. Kitty leaves, and Angelique says she reminds her of someone she loathed. Angelique tells him she's going to the village, and when he asks her what for, she says she'll let him wonder. 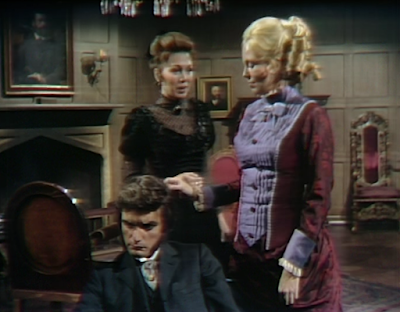 Kitty shows Edward the flowers and asks who could have come into her room when she was asleep. Edward assumes it was Jamison, who must have a crush on her. He says he would have, had she come to town when he was Jamison's age. Edward looks at the book of poetry, and says it must have come from the old house. She asks who lives there and he says no one. She mentions Barnabas, and Edward tells her that he'll have a talk with David. After he's gone, she wonders about Barnabas. 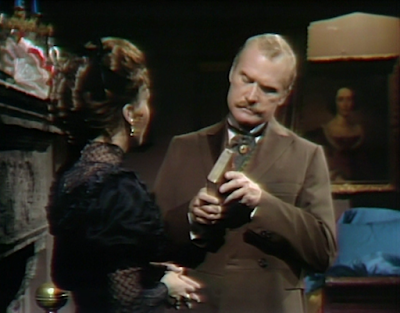 Quentin wonders where Amanda is. He sees Kitty in the foyer, staring at the portrait of Barnabas. Edward comes downstairs and asks her where she got it. She begs the portrait to let his eyes show her what to do. She says Edward is Joshua Collins, and runs out of the house. 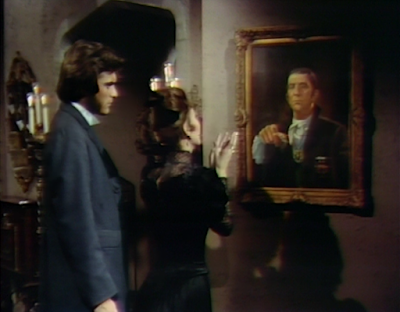 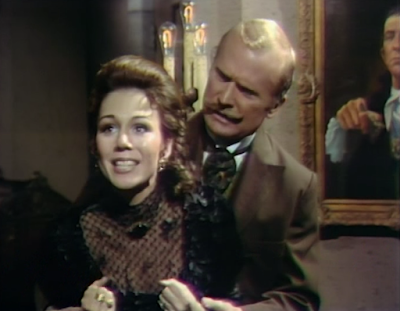 Kitty kneels at Jeremiah Collins' grave, realizing that he was her husband. She says Angelique made them marry. Edward comes to her and she calls him Joshua. He reiterates that he's not Joshua, and she was not married to Jeremiah. He explains that Jeremiah died 100 years ago, and he was married to a woman named Josette. She runs off. 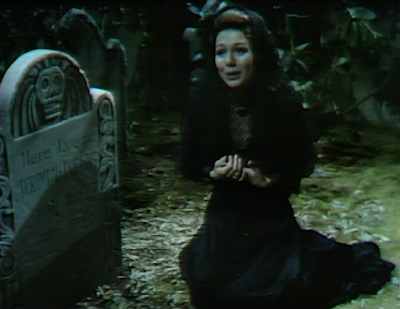 Angelique gives something to Julia, and asks when she'll need more. Julia tells her she'll need it tomorrow. Julia explains that it's curious meeting her, and even liking her, knowing what she does about her. Angelique assures her that everything he told her was true, and that she truly loved Barnabas. Julia tells her she must be careful, because Petofi is planning something involving Quentin. She says she'll try, but his hand frightens her. 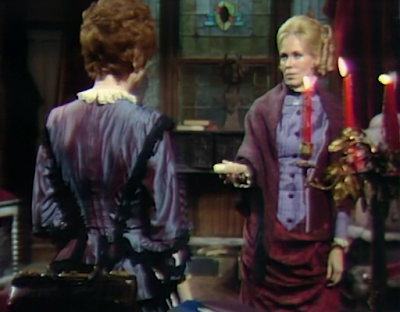 In the woods, Kitty calls for Barnabas. Quentin finds her, but she runs away from him.

Angelique returns to Collinwood and finds Petofi waiting for Quentin. She says he has his hand, and she can summon strange and horrifying spirits. She asks if he'd like to someday meet with King Johnny Romano, his sword held high. 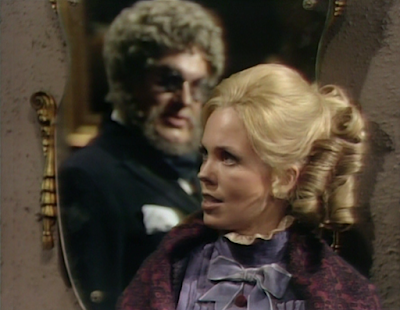 Kitty arrives at the rectory looking for Barnabas. Quentin follows her in, and listens as she refers to Barnabas as her darling. She says he is coming to her. A door opens and Julia comes in. Kitty asks her why she's hiding Barnabas. Julia asks Quentin for help, and Kitty is herself once again. She runs off. Quentin tells Julia he realizes why she's still in the past. He says that Barnabas is still alive. She assures him that Barnabas is dead, and he must also believe it. 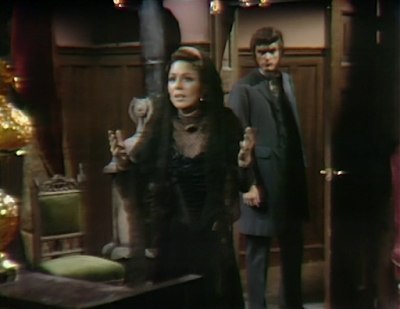 Kitty tells Edward that whatever is happening to her must stop. He says it will with rest and love. She asks if love will cure her, and he says he's sure it will. She tells him she couldn't live through this without him. She asks him if Jamison left the items by her bed. He says that Jamison did, and she tells him she knows he's lying, but thanks him for it. 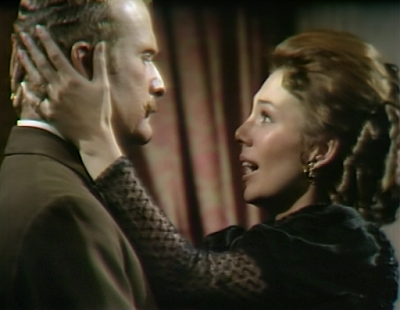 Petofi is waiting in the drawing room when Quentin returns home. He tells Quentin that love has made him bitter. He tells Quentin to look at his hand. He tells Quentin that his ring makes him available for a new life. He rubs Quentin's temples. He asks if he'd like to be as he is now in his new life. Quentin says never, but falls into a trance. Petofi leaves, telling him he can wake any time. When he does, he notices he's wearing Petofi's ring. He goes to remove it, but is unable. 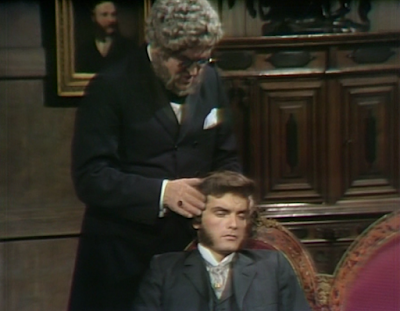 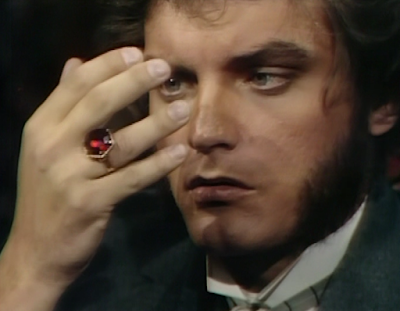 John: So Kitty is getting phantom gifts. Are these truly from Barnabas? And if they are, has he escaped the cave, and the stake?

Christine: If they aren't from Barnabas, then perhaps Angelique is responsible. Maybe she is so happy to be marrying her new true love, Quentin, that she finally wants Barnabas to have the same happiness with his one true love. Nah, that couldn't be it. It seems the dream and gifts sent Kitty into full on Josette takeover for a time there.

John: Who would have thought Angelique and Julia would be gal-pals! I'm curious what Angie's delivering to Jules... drugs, perhaps? To dull the pain of a lost love? 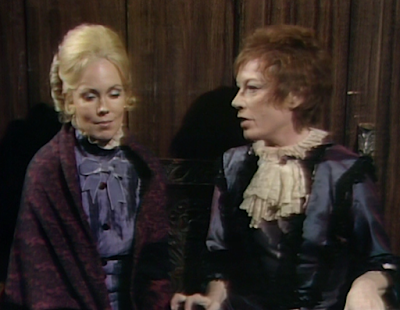 Christine: It is difficult to believe Julia would say she likes Angelique, knowing the many deaths of Collins family members she has caused, though I can see how she'd admire her strength and persistence. I also understand why she might want to befriend her in order to deal with Petofi and/or revive Barnabas, which leads to question whether or not the packages are something to address the Petofi problem, or if they're packets of blood to restore Barnabas. It would seem the writers want to give us some indication that Barnabas will be back by leading us to believe that Barnabas' body is now housed in the rectory.

John: Quentin finally has his own MeToo moment—with Count Petofi! He does a strange job selling his inability to remove Petofi's ring... something from the Roger Davis school of overacting. 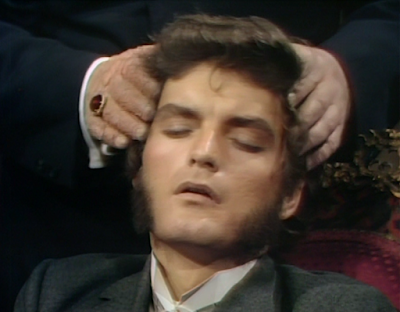 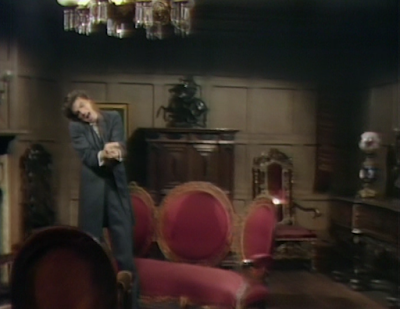 Christine: It looked a lot like his wolf transformation convulsions. Whatever Petofi has in mind for Quentin seems to have been set in motion. It will be interesting to see what effect the ring has on him. 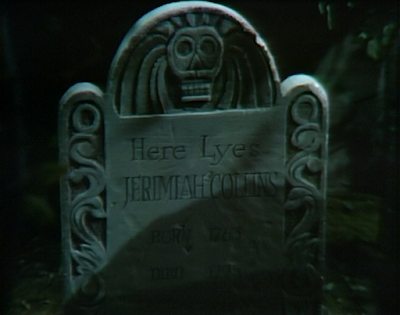 Down for the Count:
Barnabas was staked in his coffin 8 episodes ago.
Posted by John Scoleri at 6:00 AM